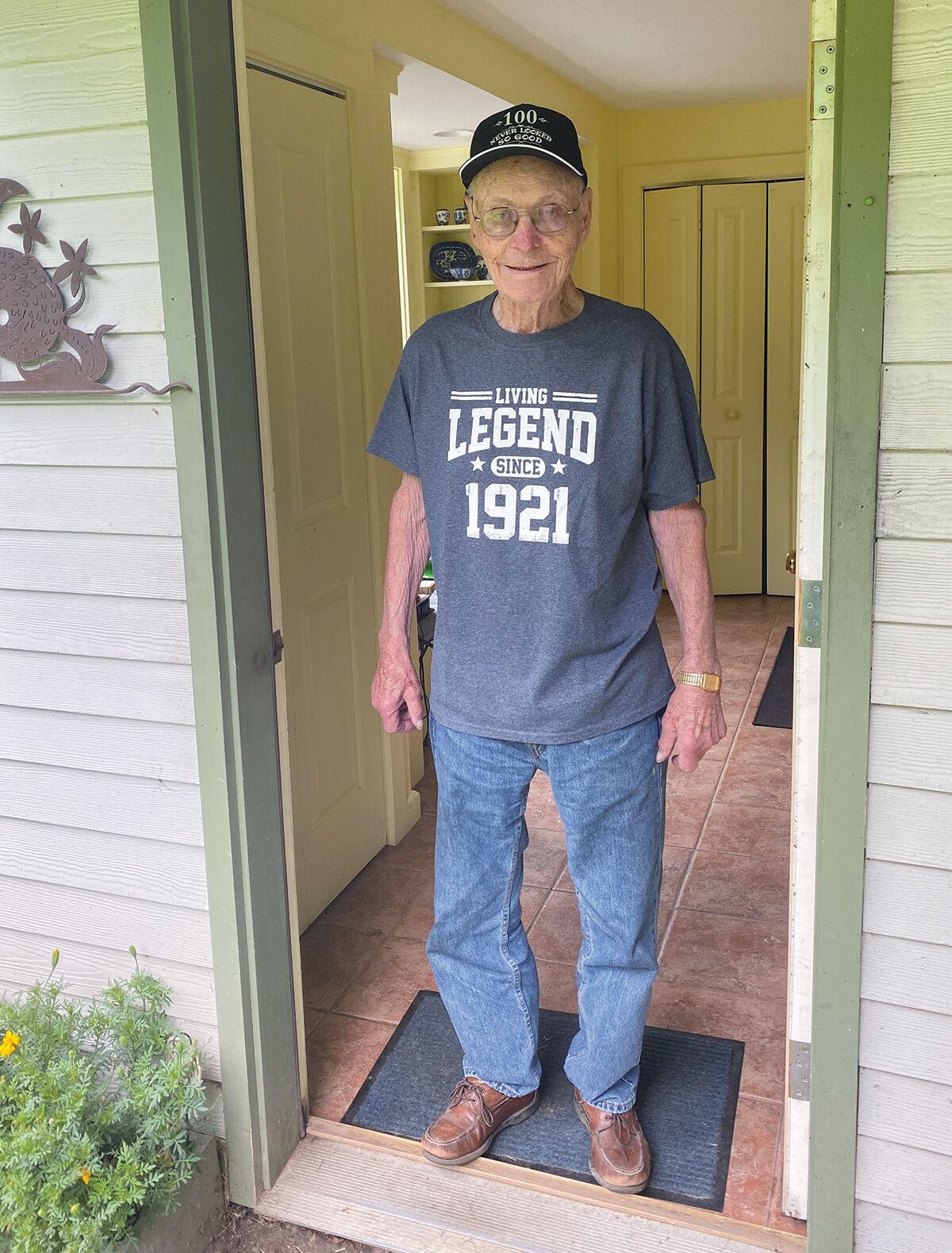 Ed Billings at his home in Stowe Hollow in early September. He turns 100 Sept. 15. 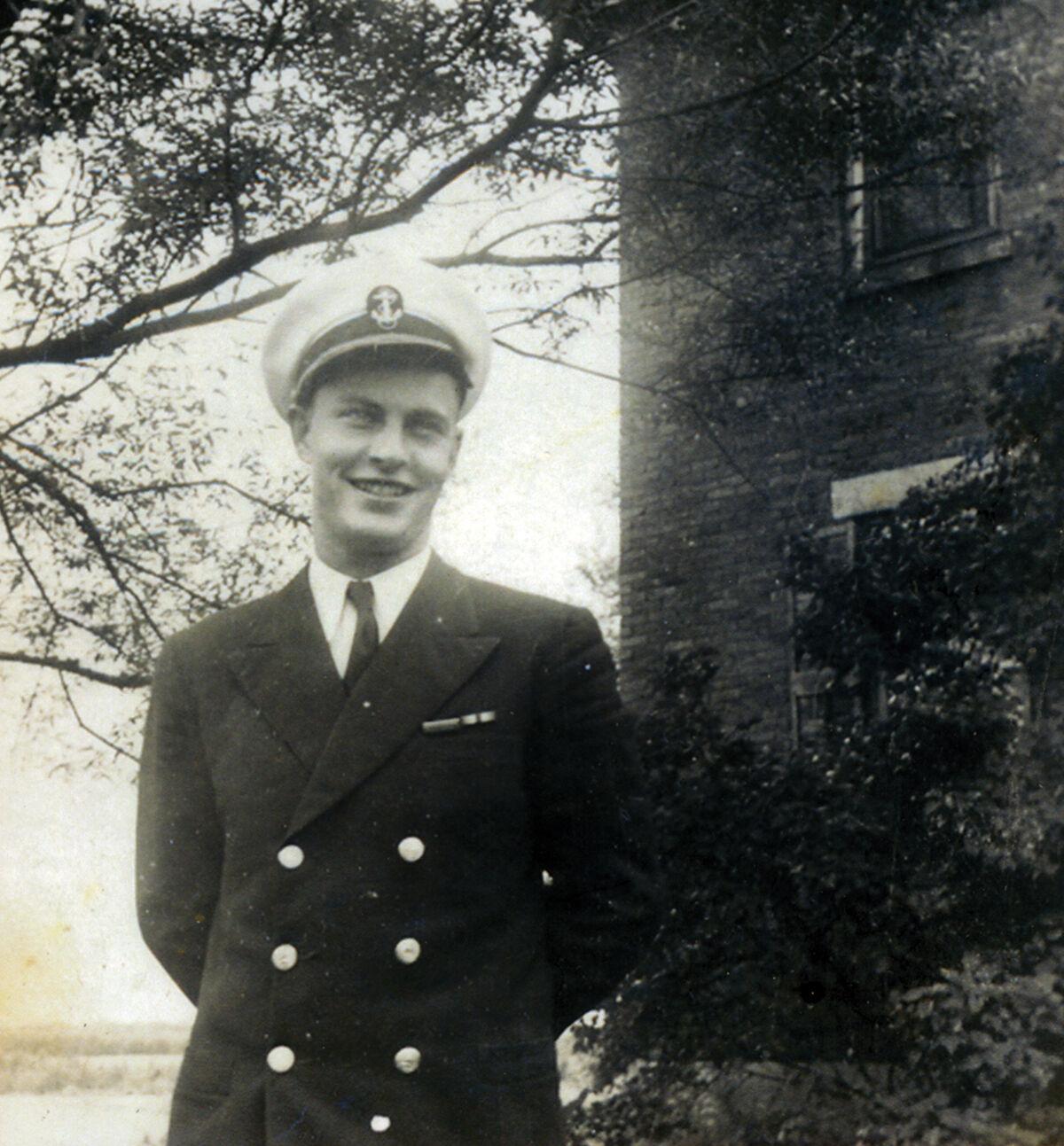 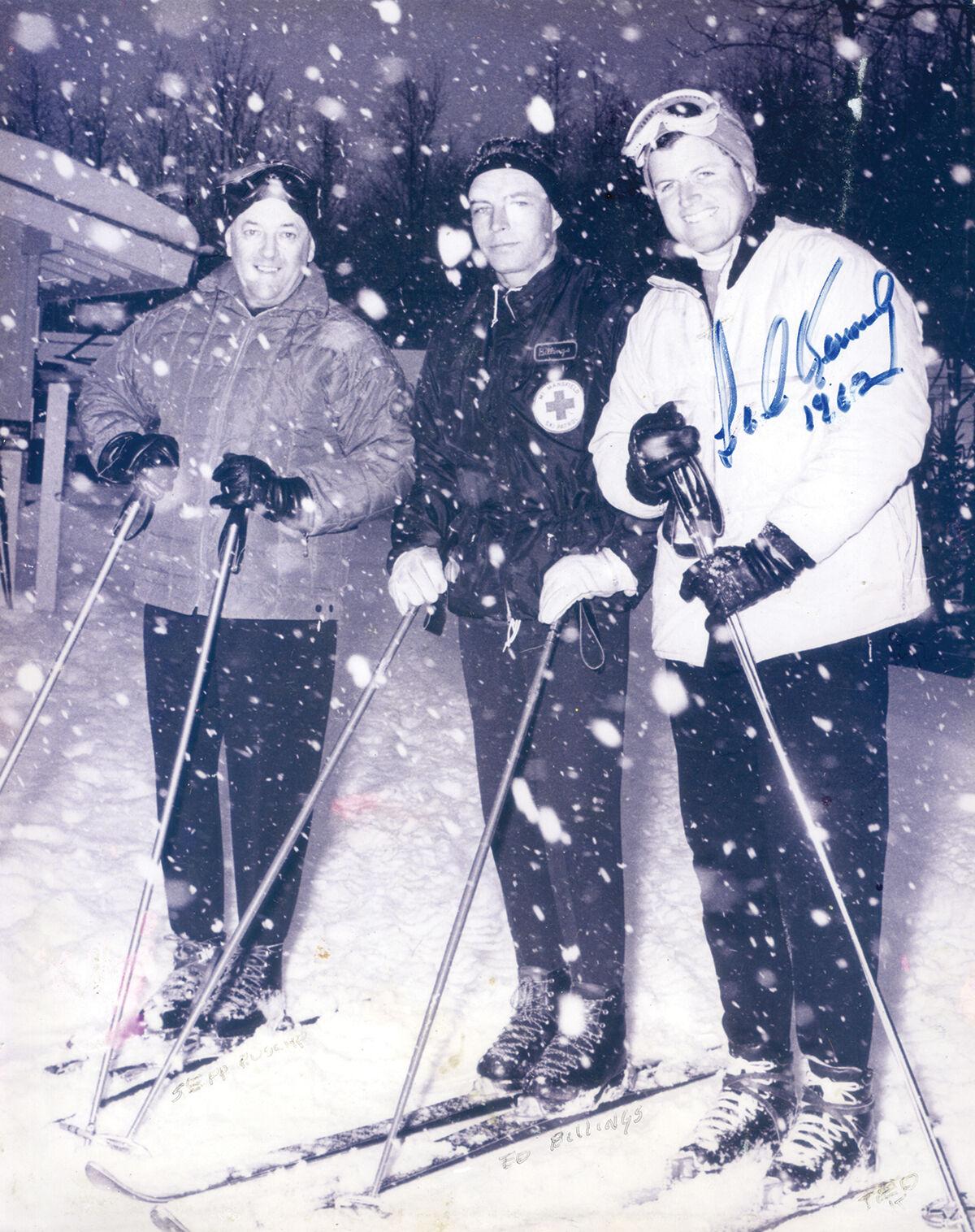 Billings was director of the the famous Stowe Ski Patrol and Kennedy was a U.S. Representative from Massachusetts.

“We just completed a run down Mt. Mansfield on Hayride,” Billings wrote on the back of the photo. “Ted actually kept up with Sepp and me.”

Billings told us that the best skier he ever saw on the Mountain was his friend, the late Sonny Davis of Stowe, who he “auditioned” for to get his first gig on the hill.

Ed Billings at his home in Stowe Hollow in early September. He turns 100 Sept. 15.

Billings was director of the the famous Stowe Ski Patrol and Kennedy was a U.S. Representative from Massachusetts.

“We just completed a run down Mt. Mansfield on Hayride,” Billings wrote on the back of the photo. “Ted actually kept up with Sepp and me.”

Billings told us that the best skier he ever saw on the Mountain was his friend, the late Sonny Davis of Stowe, who he “auditioned” for to get his first gig on the hill.

There’s a tendency to call someone a “longtime” this or a “longtime” that, but when you crack the century mark, you leave the young ones in the dust. Ed Billings, who turns 100 on Sept. 15, didn’t move to Stowe until he was about 30 years old, but we dare say 70 years in town is a good, long time.

It’s impossible to contain a person’s 100 lived years in a thousand words, but Billings’ young friend Peter Beck did a pretty good job.

Here’s what Beck had to say:

On Tuesday, July 27, I had the pleasure of taking the past head of the Stowe Ski Patrol, master builder, building designer, artist, poet, World War II Merchant Marine officer and deep-sea diver, Ed Billings — and his wife, Patty Soper Billings — to lunch at Idletyme Brewing Company, formerly the Shed Restaurant.

Ed will soon celebrate his 100th birthday and I can truly say that he doesn’t look any older than those in their 70s! He doesn’t take any medicines, walks every day and the only concession to age is his sometimes faulty short-term memory.

But his long term memory is as sharp as a tack, as was demonstrated by stories of the people we both knew, the good times we had on Lake Champlain sailing, and the many gatherings at the Shed where longtime Stowe characters such as Gary Fisher, Hal Wilhelm, Jim Jackson, together with many of the Stowe Ski Patrol and ski instructors, enjoyed their favorite brews while munching on a famous Shed Burger cooked by owner Ken Strong with help from his early partner, Ted Ross.

Ed, by the way, was the original designer in 1964 of the bar and restaurant that came to be known as The Shed, which, among other things in its former life, had been a cider mill owned by Paul Biedermann.

From classroom to ship

Ed was born in 1921 and raised just north of Greenfield, Mass. When he started high school, like so many, he had little idea of what he wanted to do in life. However, he said he did like drawing and designing and so was assigned to a “commercial” line of study rather than college preparatory courses.

That changed later in his high school career when his mother demanded he be given the opportunity to take advanced math and science courses.

Following graduation, he sought out the most respected contractor in the area, a Mr. Jim Roberts and asked for a job. Roberts replied that if he wasn’t up to the contractor’s high standards for work, he would be let go. Ed replied to Roberts that if he didn’t feel himself up to those standards, he would let himself go.

So, he began his apprenticeship, learning quality house construction while at the same time attending the University of Massachusetts part time.

In 1941, he joined the Merchant Marines, which was a civilian organization even during World War II. He received extensive basic training at the Merchant Marine facility in Sheepshead Bay, N.Y., and while there was trained as a hard-hat deep-sea diver, a dangerous duty involving underwater repair and recovery. Following his basic training, he was selected for officer training at Kings Point Academy and upon graduation he was assigned as the navigator on his first ship.

And while these Merchant Marines and their ships, mostly Liberty Ships, provided the lifeline of essential materials to both our armed forces and those of our allies, while suffering great loss of life at the hands of German submarines and the brutal weather of the North Atlantic sea, they were not considered combat personnel and so did not qualify for any of the support or benefits that members of the Army, Marines, Air Force or Navy received.

In late 1945, Ed left the Merchant Marines and returned home to the Greenfield area and was hired as an engineer at Colonial Engineering in Springfield.

From the ocean to the mountain

Ed had become interested in skiing when the brother of a girl he was dating told him that, if he wanted to hang around with her, he had better be a skier as she was an avid one.

So, using rented skis, poles and boots, Ed joined the girl and her brother at Chickley Alp, a now abandoned ski area in Hawley, Mass., for a day on the slopes.

For Ed, it was a disaster. His first time on skis and he couldn’t stand up on them once they began to move. While suffering the embarrassment of being unable to impress the young lady, he overheard her brother telling her he was a loser and would never be able to ski and that she should dump him.

That was all the challenge Ed needed. He had some vacation time coming so he called a ski area he had read about in a magazine to arrange lessons at its internationally recognized ski school. The ski area was Mont Tremblant in Quebec, Canada.

After 10 days of ski lessons and long hours on the slopes, Ed was well on his way to becoming an expert skier. He returned home and blew the girl and her brother off the slopes of Chickley.

But he had now been bitten by the ski bug and was addicted. Having heard of Stowe and its famous ski patrol in or about 1951, he resigned his job at Colonial and headed to Stowe with his then-wife, a teacher, Dorothy June Morton, with the sole purpose of joining that patrol.

George Wesson, then head of the patrol, told Ed when he applied for the job that he may be a good skier, but the test would be if he could safely bring a loaded toboggan down Mt. Mansfield’s steepest trail.

Ed did so without a problem and was hired and ultimately, some years later, became the head the nation’s oldest ski patrol.

During those first summers in Vermont, Ed and Dottie worked at a resort in Mallets Bay on the shores of Lake Champlain; he as a bartender and she as a waitress. In future summers he would begin his career as a carpenter and house designer.

For a few years Ed teamed up with Hal Wilhelm during the summers in the house construction business but, in 1969, struck out on his own, both designing and building many quality homes in the Stowe area until 2019.

Today, Ed and his wife Patty live in their home on the North Hollow Road, enjoying the coolness of the shade on their porch while being visited by a bouquet of hummingbirds, always ready to entertain guests who might stop by to say hello and chat.

Peter Beck’s salute to Ed Billings as he reaches 100 in last week’s Stowe Reporter was wonderful, and the pictures classic.