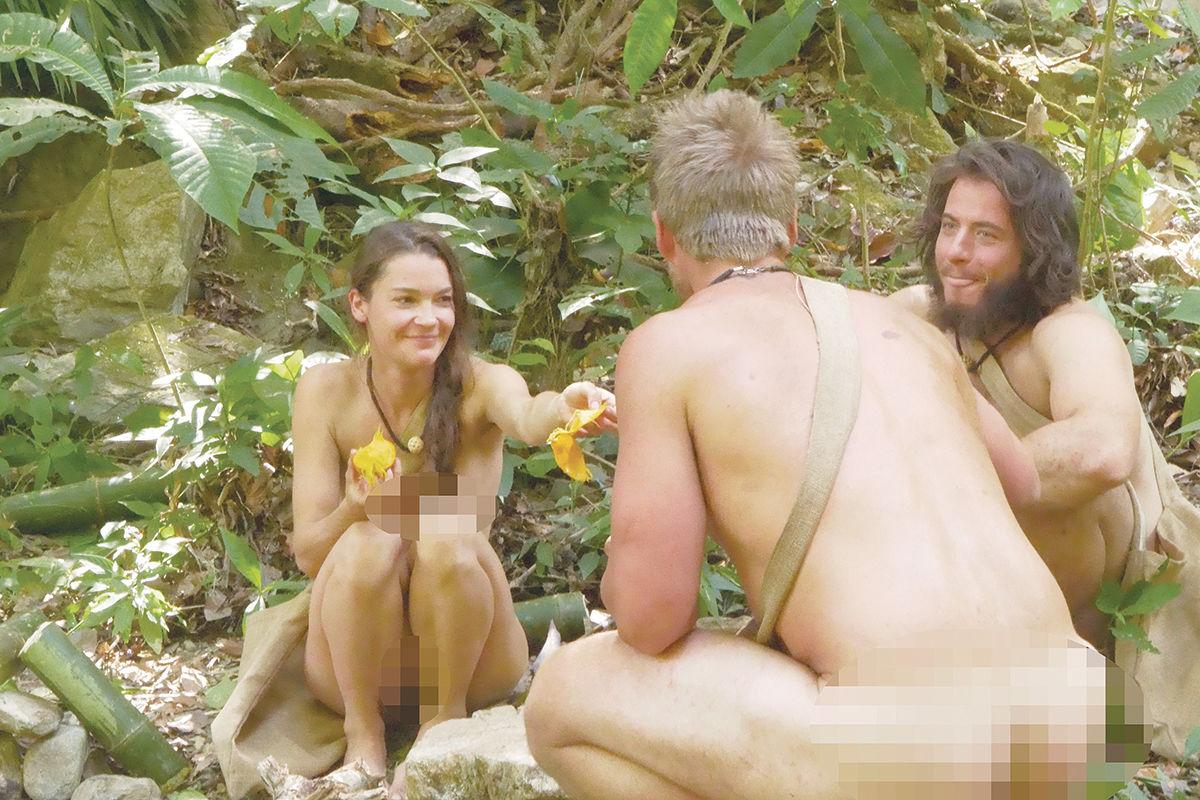 Alexandra Martin and her two fellow competitors are still smiling while sharing a moment gathered around their camp. 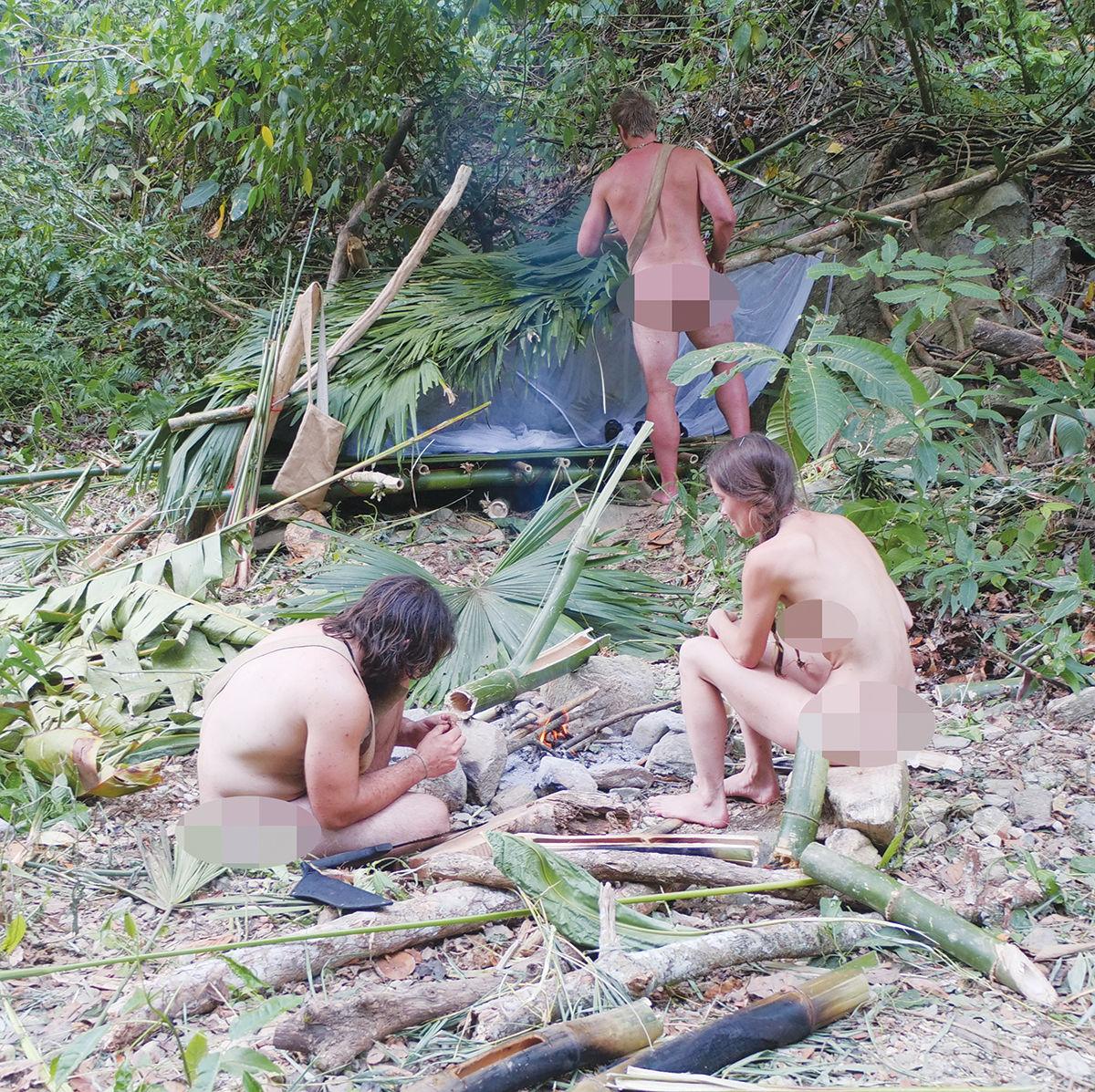 Lamoille County’s own Alexandra Martin appeared on the newest season of Discovery Channel’s “Naked and Afraid” that began earlier this year. Martin and two fellow survivalists were dropped into the wilds of the Colombian jungle to attempt three weeks on their own with only their wits and skills to get by. Martin’s episode, titled “Two Tarzans, One Jane” first aired March 8 but can still be viewed on the Discovery Channel website. 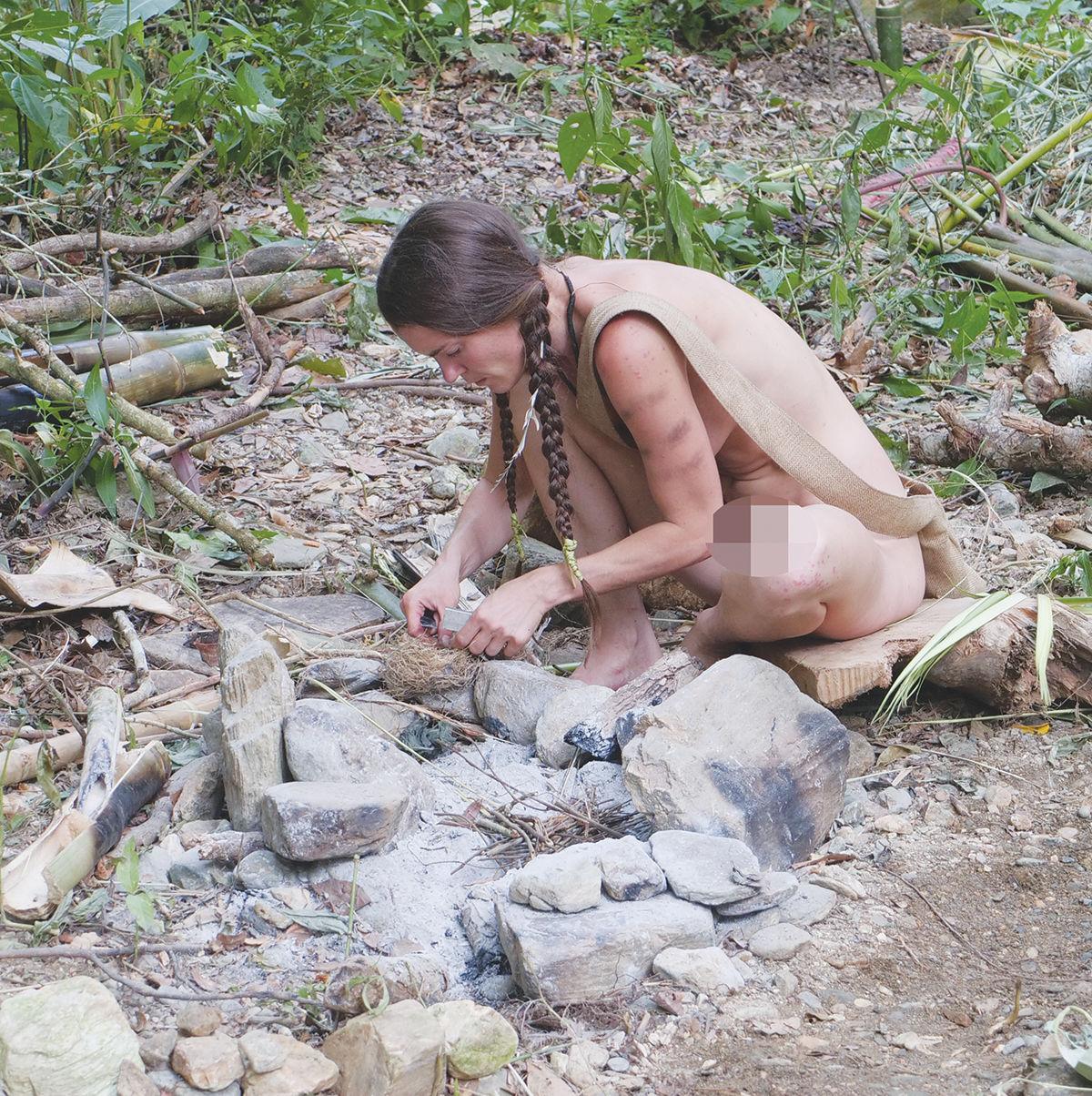 Alexandra Martin works to start the fire back up.

Alexandra Martin and her two fellow competitors are still smiling while sharing a moment gathered around their camp.

Lamoille County’s own Alexandra Martin appeared on the newest season of Discovery Channel’s “Naked and Afraid” that began earlier this year. Martin and two fellow survivalists were dropped into the wilds of the Colombian jungle to attempt three weeks on their own with only their wits and skills to get by. Martin’s episode, titled “Two Tarzans, One Jane” first aired March 8 but can still be viewed on the Discovery Channel website.

Alexandra Martin works to start the fire back up.

Three weeks in a jungle near the Equator without supplies, shelter or even clothes isn’t something most people would willingly sign up for, but Stowe resident Alexandra Martin did.

Martin was a participant on the most recent season of Discovery Channel’s “Naked and Afraid,” a show with the slogan “Bring nothing, give everything.” In each episode, two or three people are dropped into a remote wilderness area somewhere in the world without supplies, shelter and, most importantly, clothes. Participants try to endure three weeks in extreme conditions using only whatever survival skills they possess and their own willpower to get by.

Martin grew up in Hyde Park and has lived in Stowe for years. She has spent much of her life traveling and seeing the world while running her own business, and when she was approached by a casting agency about the opportunity to be on “Naked and Afraid,” she saw a chance to do more traveling while also testing her endurance, skills and her mind.

“I’ve always enjoyed doing things that scare me a bit,” she said. “And I really wanted to do it to know I could. I like pushing myself outside my comfort zone.”

Martin didn’t want to spoil whether she made it to the end of the three weeks — her episode aired March 8 — but she saw her time on the show as a way to experience the difficult existence that many people around the world face every day, to “know the suffering of people who don’t have comforts.”

Martin was pretty outdoorsy growing up, and testing her survival skills was also a goal. But, in addition, Martin also wanted to prove to herself she could do it. She’d been bullied growing up and looked forward to the chance to say “I can do this, be tough and exorcise those demons.”

“A small-town girl going on this wild adventure, being able to inspire my family and my community and bringing that treasure back has been rewarding,” she said.

Martin’s three-week survival challenge took place in the rainforests of Colombia, in an episode titled “Two Tarzans, One Jane,” with Martin and two men attempting to survive in the wilds of the South American country.

One of Martin’s biggest worries was who she’d be working with, and learning she’d have two partners increased that worry.

“Two partners, balancing two other personalities with my own in a time of exhaustion, starvation and extreme discomfort” — all that made her nervous.

What if she was stuck with a misogynist, “a real tough guy who was demeaning?”

But things turned out better than that.

“Relating with other people in those kinds of situations and being able to communicate clearly is really important to me,” she said.

“I did want to finish, but I wanted to trust my limits,” she said. She would not see it as a failure if she did have to leave early.

One of the biggest challenges in surviving naked in the jungle is how cold it gets at night.

“I will tell you it was pretty hot during the day and pretty cold at night, at least for being naked,” Martin said. “I’m a small-framed person, and I obviously lost weight. At night I was really cold.”

Sleep was another challenge. She and her partners had to continually wake up to feed the fire, and sleep is tough with jungle critters moving around just outside the firelight.

“There were some big cats I could hear moving around, big predators,” Martin said. The three tried to identify the creatures by sound.

“You hear things like big cats, trying to be quiet, they move differently than other animals in the forest,” she said. Other critters were more of a worry during the day — walking through dense jungle vegetation, feet and legs exposed, dreading an encounter with a snake, poison dart frog or another nasty creature.

The other aspect that really struck Martin? Hunger, and the fight against it.

“I tried to fatten up as best I could” in advance, Martin said, but lack of food “certainly brings about challenges.”

After not eating for several days, even standing up became a challenge, but ultimately she and her partners found food.

“There were definitely some animals that sacrificed their lives to feed our bodies, and those encounters were real,” Martin said.

Other encounters with wildlife were more of an inconvenience.

“We definitely got munched on” by all sorts of bugs, Martin said. She knows well the mosquito and the gnat of northern Vermont, and before she left, Martin acclimated by spending evenings meditating outside near a pond.

“I’m just lucky that my mind was sharp enough that it didn’t attach to being uncomfortable the whole time,” she said.

Martin said her biggest takeaway from the experience?

“For me, it strengthened my mind muscle,” Martin said.

The newest season of “Naked and Afraid” put contestants into the Bermuda Triangle, jungles in the Philippines, the African savannah and North America’s Rocky Mountains. To find out how Martin fared, view her March 8 episode at go.discovery.com/tv-shows/naked-and-afraid.