You are the owner of this article.
Edit Article Add New Article
Home
SCENE
Calendar
Special Publications
Multimedia
Marketplace
Classifieds
Contact Us
1 of 7 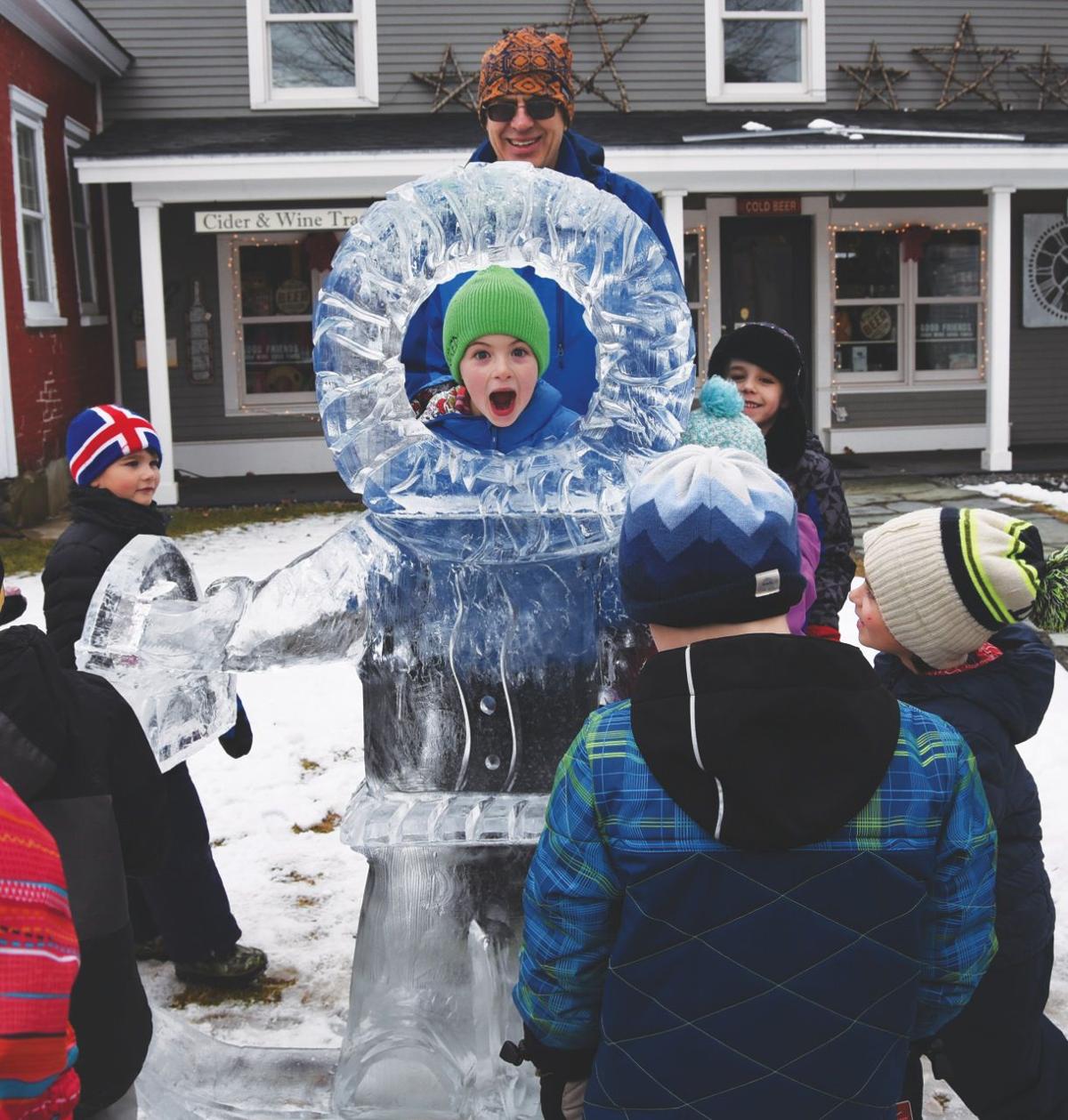 A group of kids enjoy checking out an ice sculpture in Stowe Village. 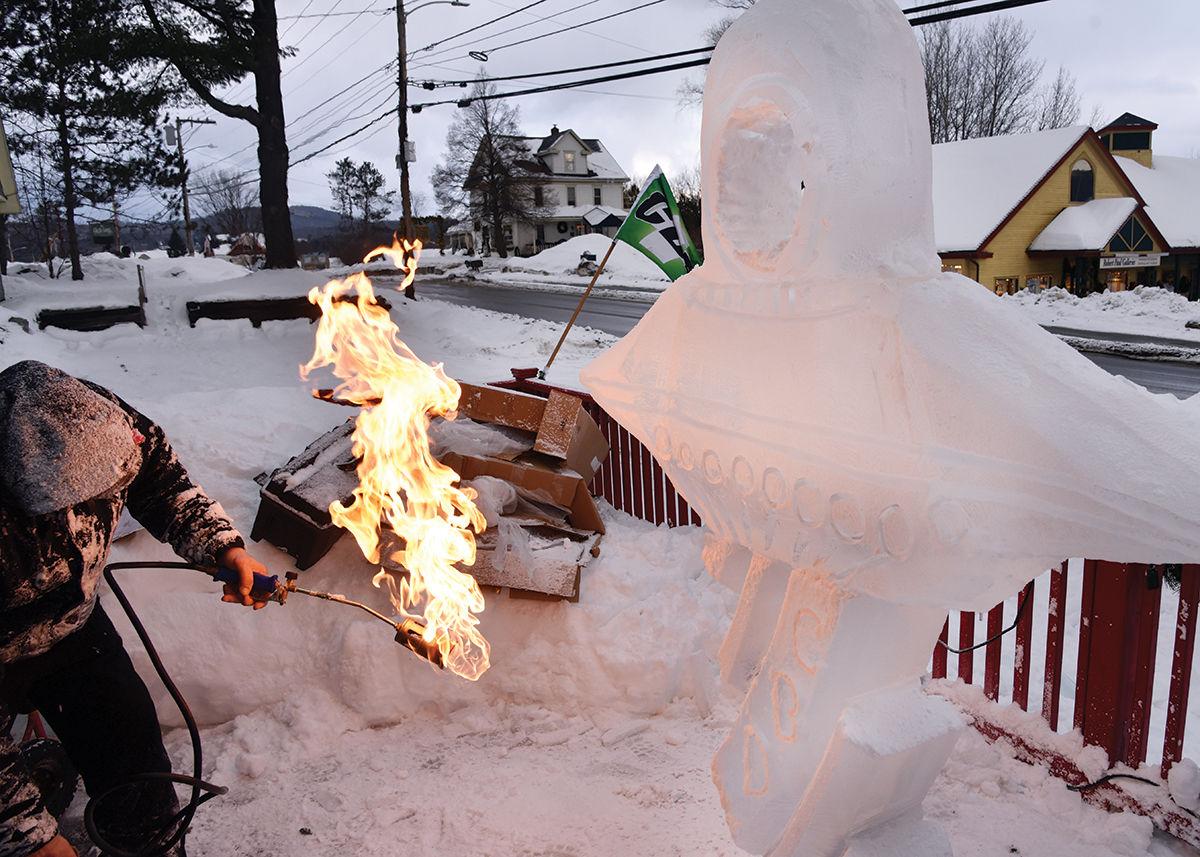 Rich Bubin of Pittsburgh prepares to glaze a sculpture on the porch of Elevated State on the Mountain Road. 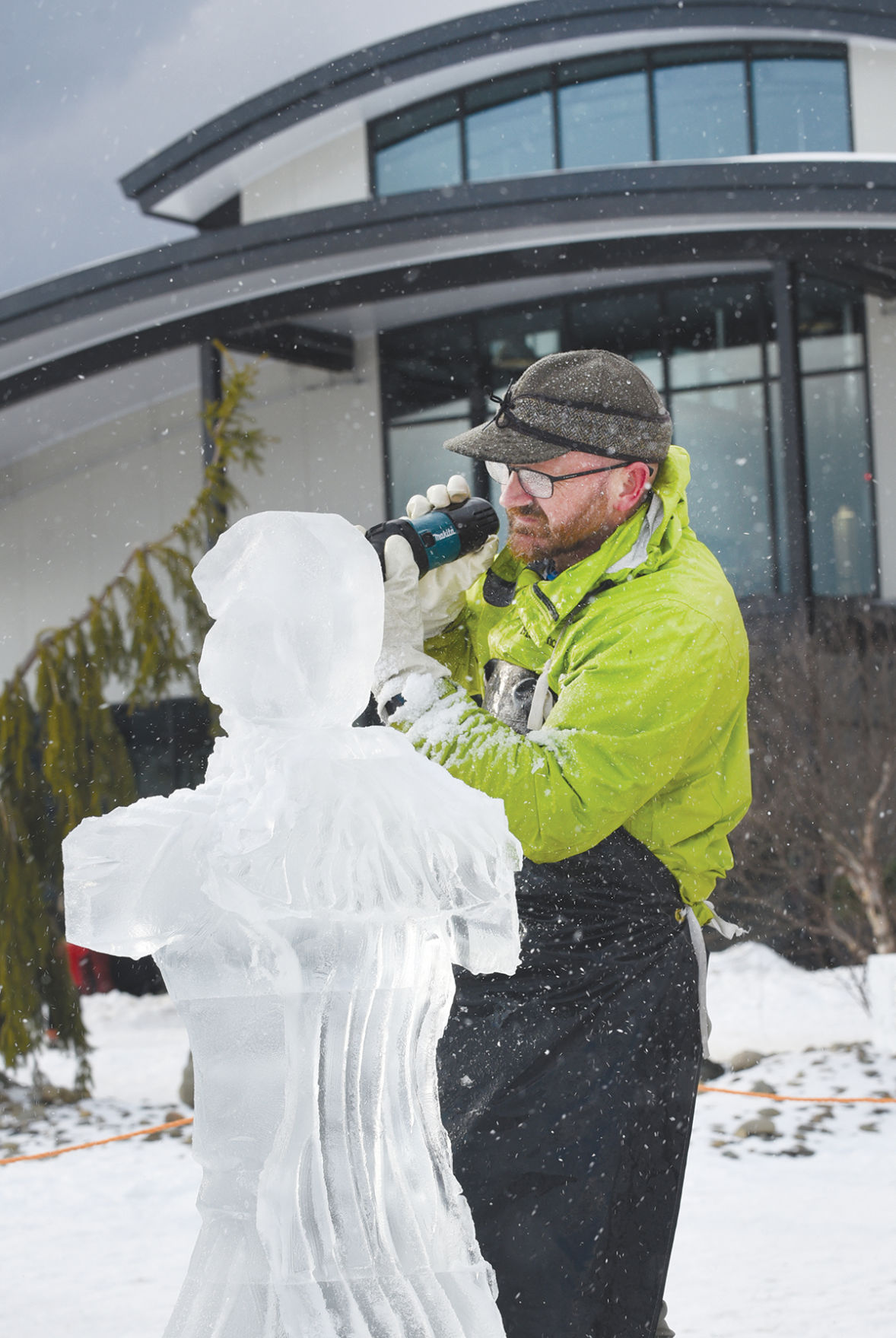 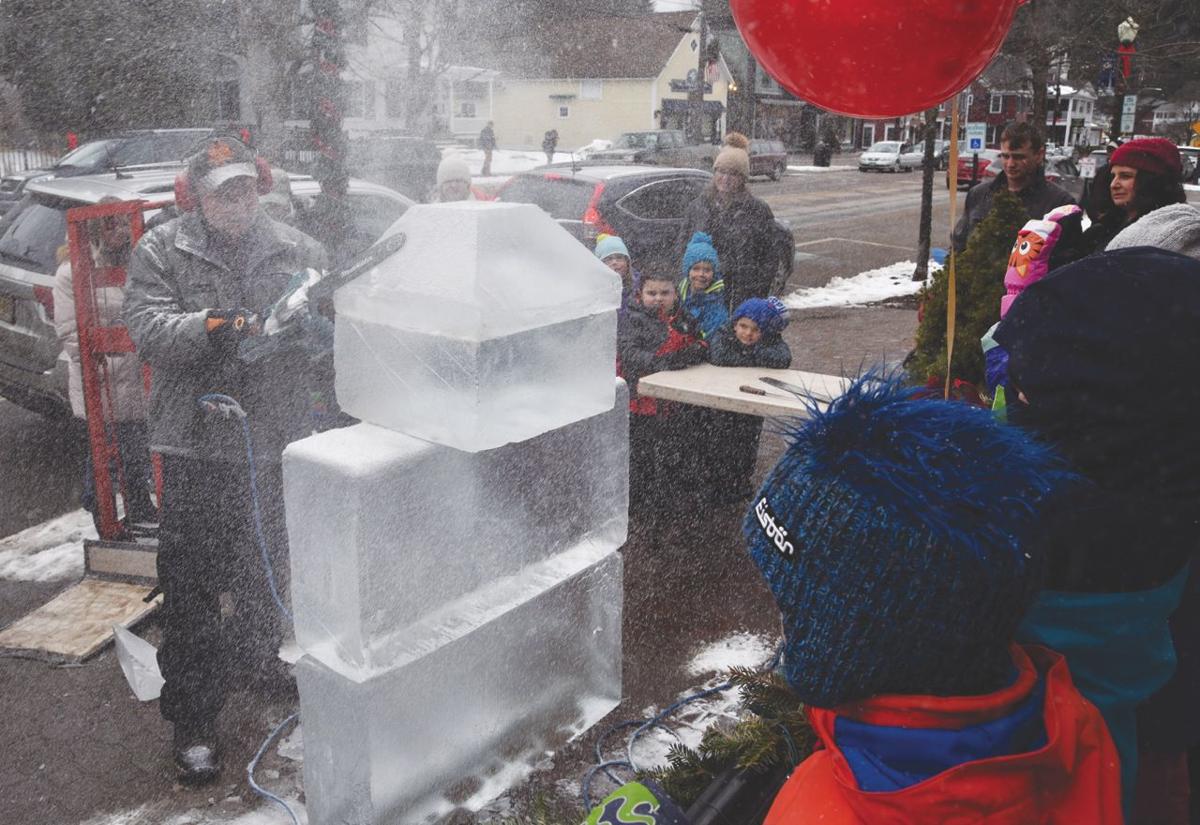 Jeff Bleier starts a carving with all the raw materials needed — blocks of ice. 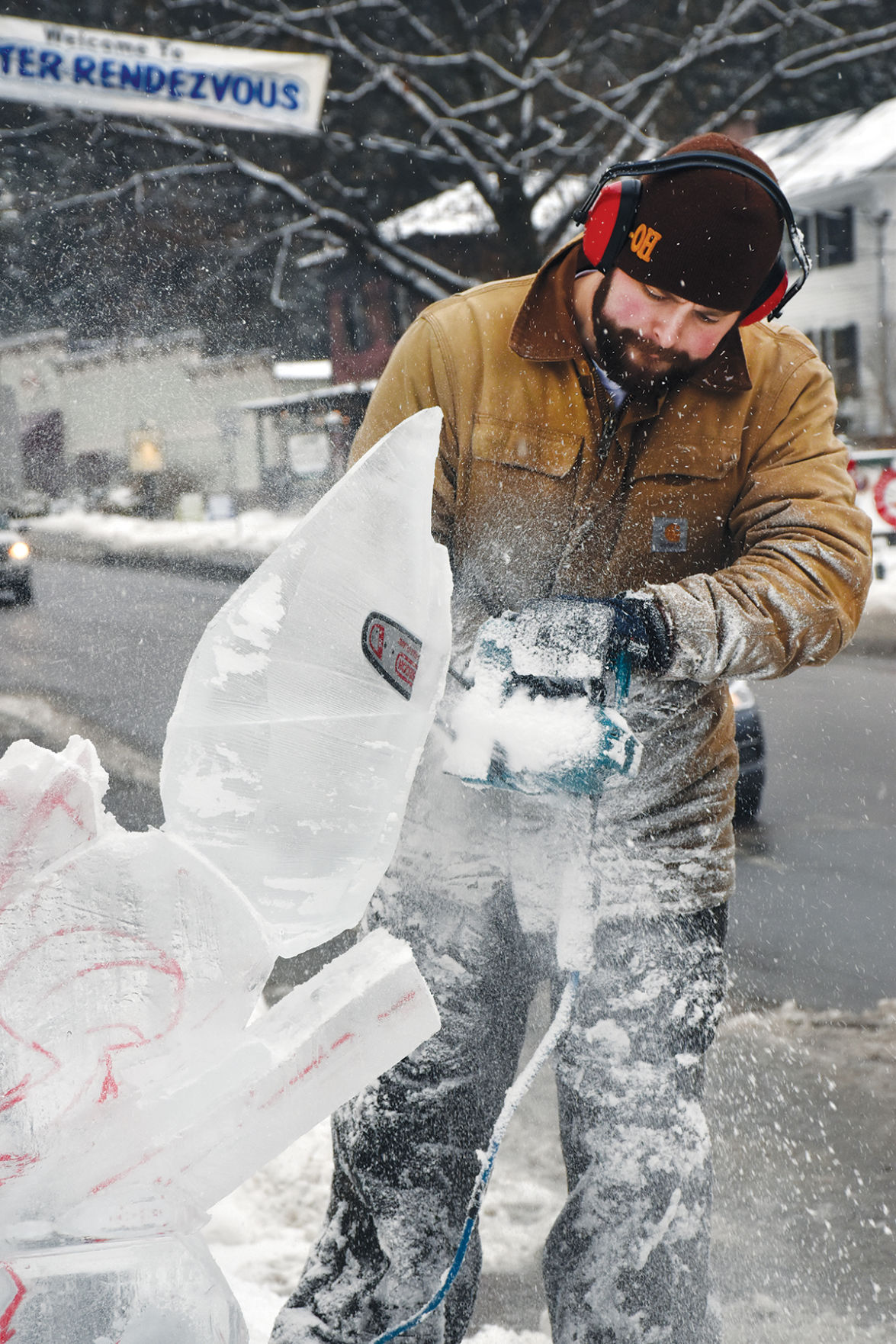 Erik Freay of Akron, Ohio, carves a piece in front of the Vermont Ski and Snowboard Museum on Main Street. He employs a mini chainsaw to create his intricate design. 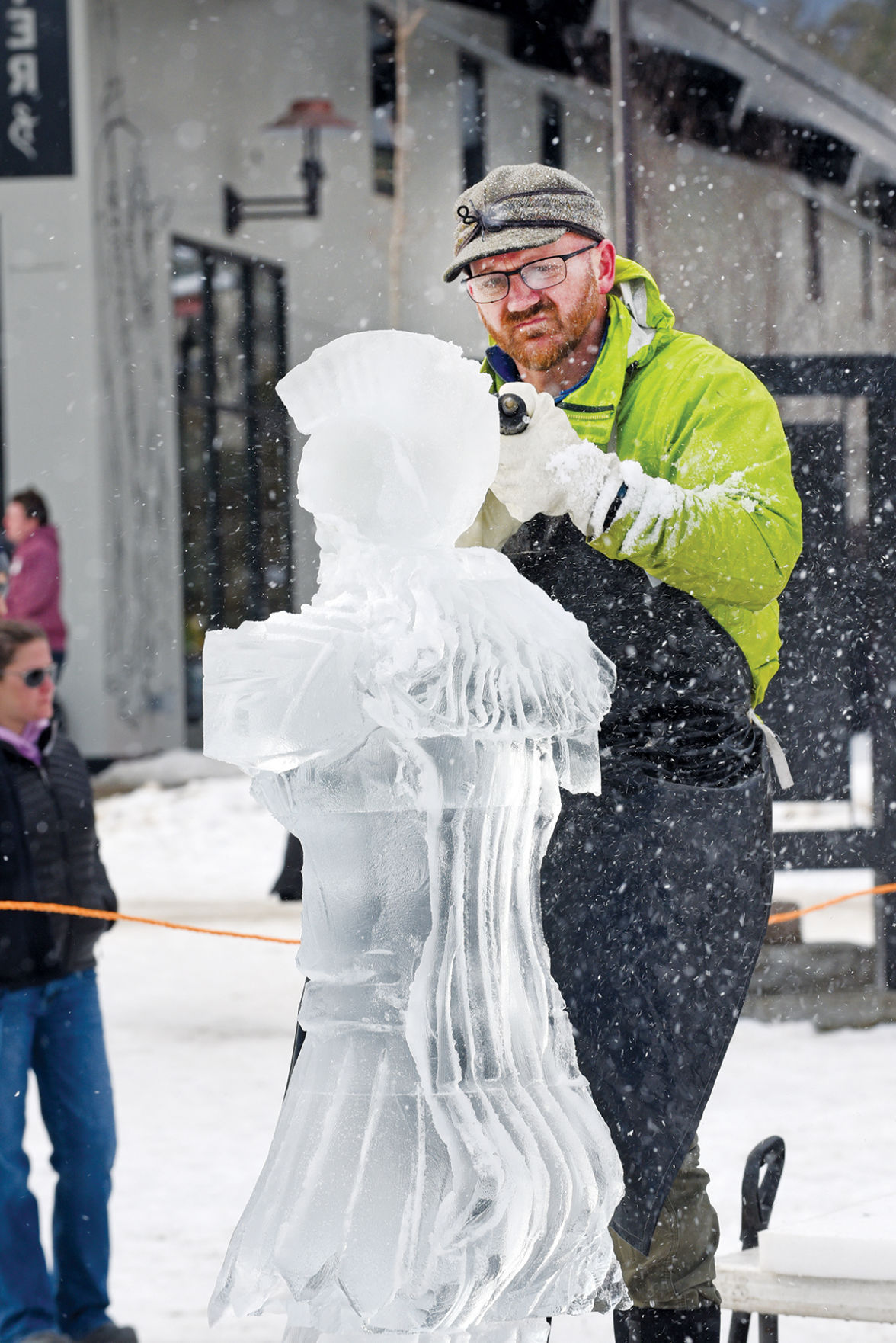 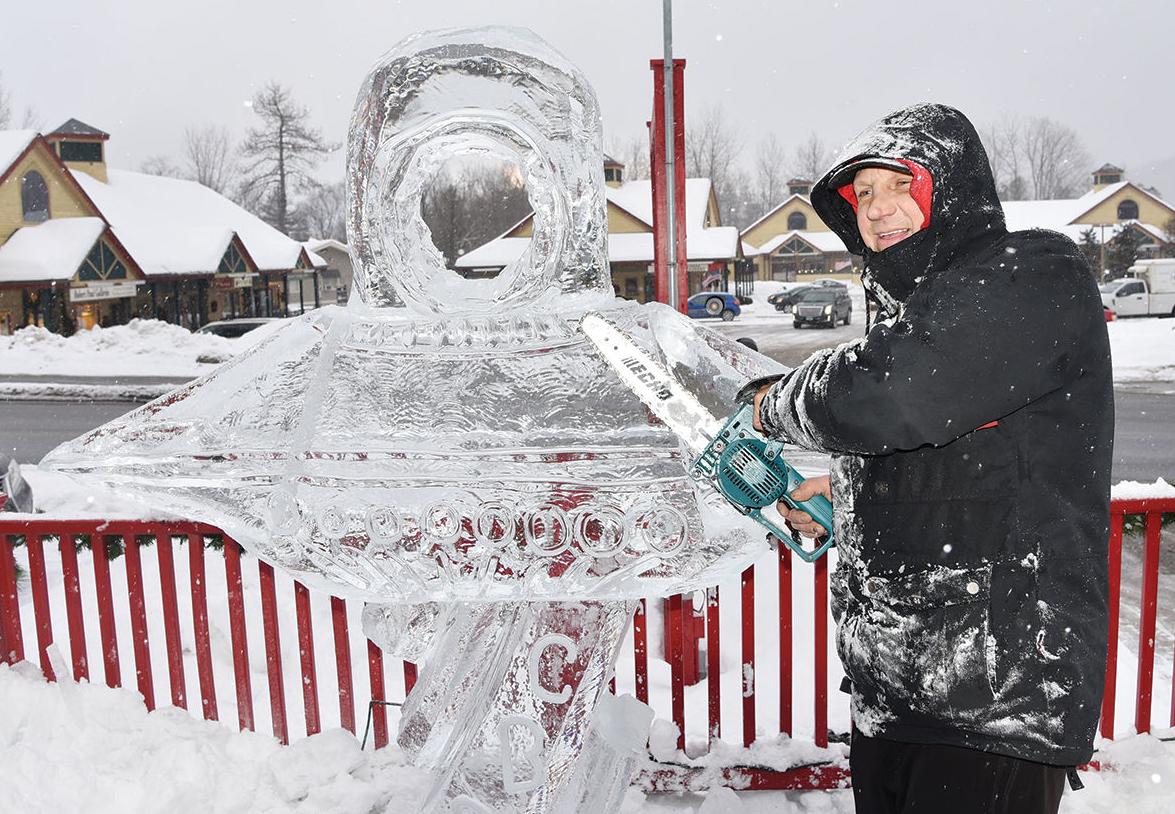 Rich Bubin of Pittsburgh poses with his ice sculpture on Mountain Road.

A group of kids enjoy checking out an ice sculpture in Stowe Village.

Rich Bubin of Pittsburgh prepares to glaze a sculpture on the porch of Elevated State on the Mountain Road.

Jeff Bleier starts a carving with all the raw materials needed — blocks of ice.

Erik Freay of Akron, Ohio, carves a piece in front of the Vermont Ski and Snowboard Museum on Main Street. He employs a mini chainsaw to create his intricate design.

Crouthamel, who hails from the Poconos region of Pennsylvania, has been to every one of them, as a competitor or ice deliverer, and this year as a judge. He said he’s optimistic the weather will be favorable for sculptures that stick around awhile, because most art doesn’t disappear when it gets warm.

“You know what? It’s a temporal art. You just hope it lasts ’til the end of the day,” he said. About competition carving, he added, “My joke is I intend for them to last until I walk away from them.”

Fellow carver Rich Bubin, a native Pittsburgher, knows Crouthamel outside the 16 years he’s been coming to Stowe. He said he thrives on the live aspect of the competition and aims to put a show on for the crowd.

Both artists carved out some time to talk about their vocation.

Not built to last

Ice sculptures are not permanent pieces of art.

Sometimes, the creation that is made at the competition is the first time the carver has done that piece. Crouthamel said he used to plan out every piece on paper, and cut to match that.

If it’s too cold, though, that can also have deleterious effects. Ice carvers often introduce heat to their pieces at some point during their construction, whether from a small blowtorch to purposely score and melt the material, or from the friction of a chain saw lingering too long in one spot.

Just like moving a glass casserole dish straight out of the oven into a cold-water bath, it’s a sudden explosion of shards.

“We warn people, if it’s too cold, to not use too much heat,” Crouthamel said. “Some guys will blow their pieces apart right when the time’s almost up.”

Crouthamel remembers one spectacular disaster. He was carving a speed skater for the Winter Olympics, athlete in full stride, really stretched out. He had just put some finishing touches on the skater’s leg, and stood up, forgetting he was wearing a cowboy hat. Hat, meet ice.

“It broke into a million pieces,” he said.

Crouthamel learned early that shattered dreams are a not-infrequent reality in his line of work. His very first piece, while at Johnson and Wales, broke.

It took him five years to try again, this time as a chef. And he hasn’t looked back since.

Out of the kitchen

Ice sculpting has its origins in the food world, which may make it unique in the art world. Say what you will about the beauty and whimsy of Auguste Rodin or Jeff Coons, but can they roast a chicken worth a damn?

Although fewer culinary schools now teach ice carving, most of them had it on the syllabus when Bubin and Crouthamel were starting out.

“After school, the only carvers I knew were chefs,” Crouthamel said. “Really, that was the start of my business.”

Bubin makes his own ice, and so do other carvers. But Crouthamel soon saw there was a market for companies, organizations and individual customers who needed ice sculptures for events, or for carvers who needed a reliable supply of ice. So, he formed Sculpted Ice Works, and the company has grown to the point it now employs 12 people year-round.

The company has a factory capable of churning out blocks for carvers to use, and has provided the ice for Stowe Winter Carnival for all but the first year of the ice carving competition.

Even though ice carving is Crouthamel’s main vocation, he hasn’t let himself stray too far from the kitchen. He and his wife run a resort in the Poconos, Buehler’s Idlewild Inn. It’s a “farm resort,” and grows what ingredients it can for its comfort food menus. Wife Mary tends to the gardens and bakes, while Mark does most of the cooking.

“We still serve three meals a day,” he said.

Bubin said about 80 percent of his work is food and beverage-related, with ice lounges and bars for events and ice martini glasses, beer mugs and shot glasses to drink from. Heck, he’ll even make you some ice to put in your glass. Would you prefer spheres? Diamonds? A 20-side Dungeons & Dragons die?

“You can make anything out of ice,” he said.

Bubin will go big, like a 15-foot-long dragon on a bike he called “Puff the Magic Biker,” or an ice maze made from 300 blocks, almost twice as many as will be used by everyone involved in the Stowe Winter Carnival.

He’ll also go small, but earn big smiles, by making souvenirs for the kids in the audience, like ice bracelets and ice lollipops.

“It gives them a cool memento to take with them,” he said. “That’s especially popular in the summer.”

The kind of ice you probably make in your freezer, or the kind you get in a bag from the gas station, wouldn’t satisfy a bartender at a high-end restaurant, much less a discerning ice carver.

As a general rule, the clearer the ice, the harder it is, although Crouthamel will gladly engage you in conversation about the exceptions, something about the molecular structure and the grain of the ice achieved through different types of, um, physics. There’s dense science talk on the subject, suffice it to say.

Simply put, clear ice is made by constantly circulating the water as it freezes, which releases the oxygen from the water. Oxygen creates bubbles. Bubbles create an opaquer ice, which is more likely to crack or shatter if handled wrong.

Often, a few bubbles here and there can be a good thing, and carvers will try to incorporate those parts of the ice into places in the sculpture they want to refract the light.

How far down the science hole can one go with ice carving? Crouthamel said, proving that most of society’s innovations have come from warfare and exploration, NASA once did a study for the government about the feasibility of creating ice bullets for the military.

Ice carving has increasingly entered the digital age, too, with computer-aided systems that can do things like print corporate logos onto ice, whether they be the large blocks emblazoned with Stowe business names that will be on hand this weekend, or a liquor company name on a bunch of ice cubes.

Crouthamel said the computer-aided carvings can be helpful for carvers learning new techniques. They simply take a precise and perfect computer-aided design and sort of reverse-engineer it, learning to replicate it using hand tools.

Bubin said there’s a similar thing going on with artists, whether the tools of your trade are brushes and Crayolas, or chain saws and blowtorches.

Said Bubin, “You’re programming something in your mind and sending that program to your hands to make what your eyes see.”

Waterbury Winterfest — a 10-day party for the community

In this photo collection: A Winterfest gate greets visitors to the skating rink; kids get tired after running around; youngsters shoot in the biathlon competition; a warm fire is good; biathlon competitors scoot quickly to the next shooting station; Winterfest president Roger Clapp opens the festivities; a fierce broomball game; and human bowling!