You are the owner of this article.
Edit Article Add New Article
Home
SCENE
Calendar
Special Publications
Multimedia
Marketplace
Classifieds
Contact Us
1 of 13 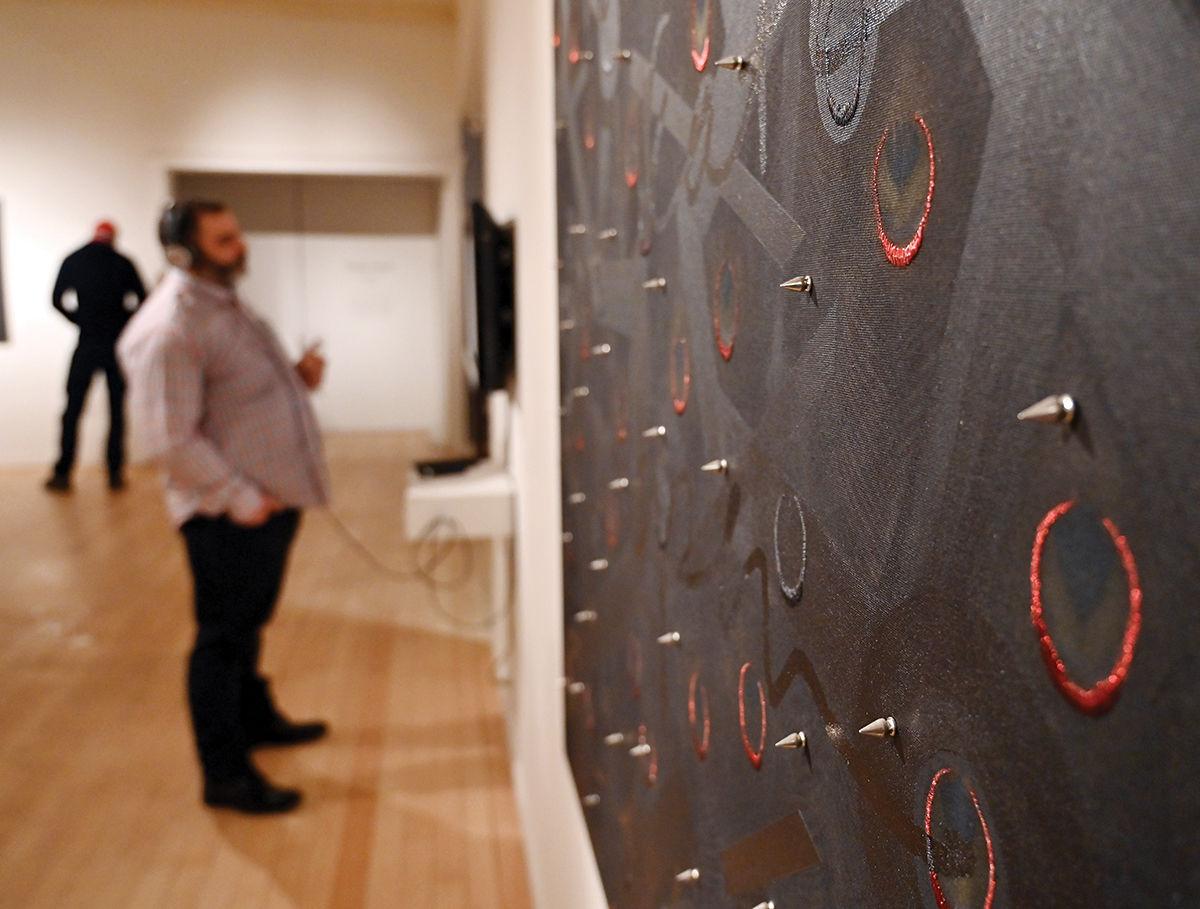 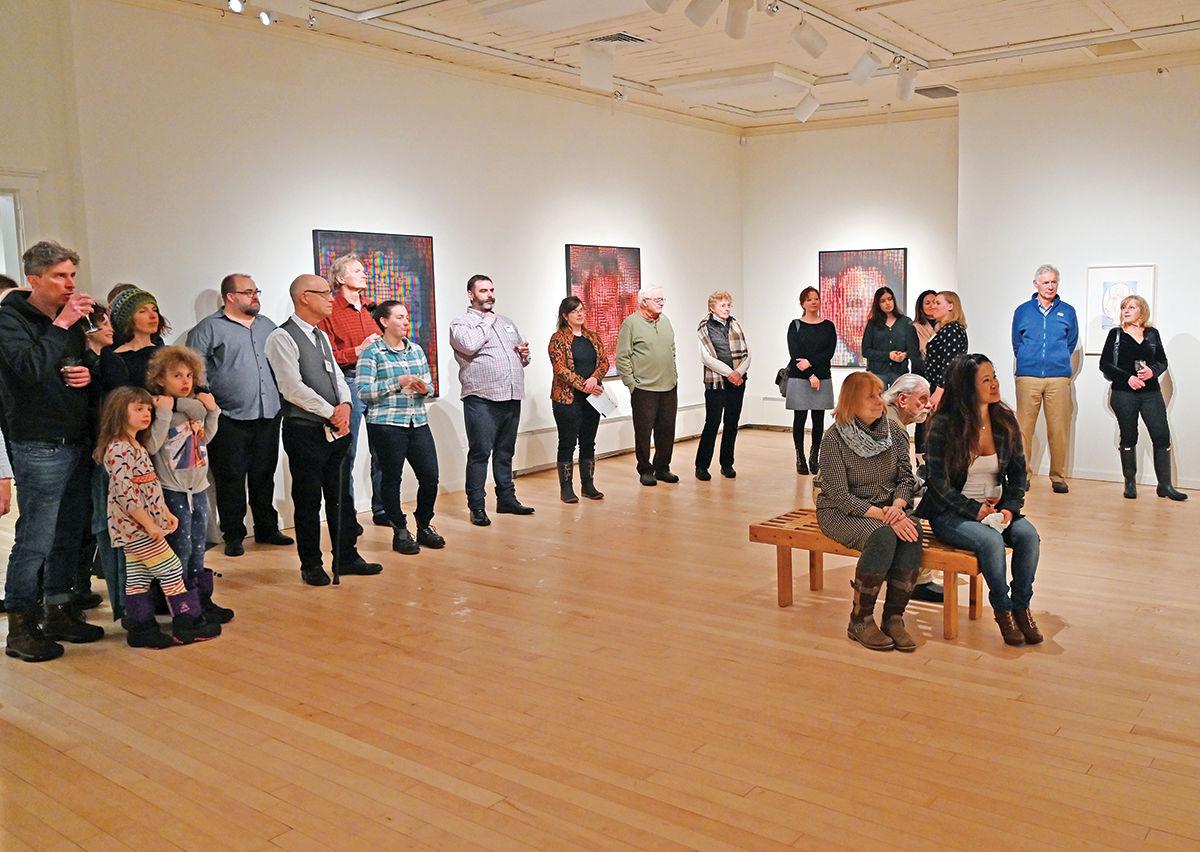 Visitors listen to a speaker at the opening reception of “Love Letters” at the Helen Day Art Center on Jan. 16. 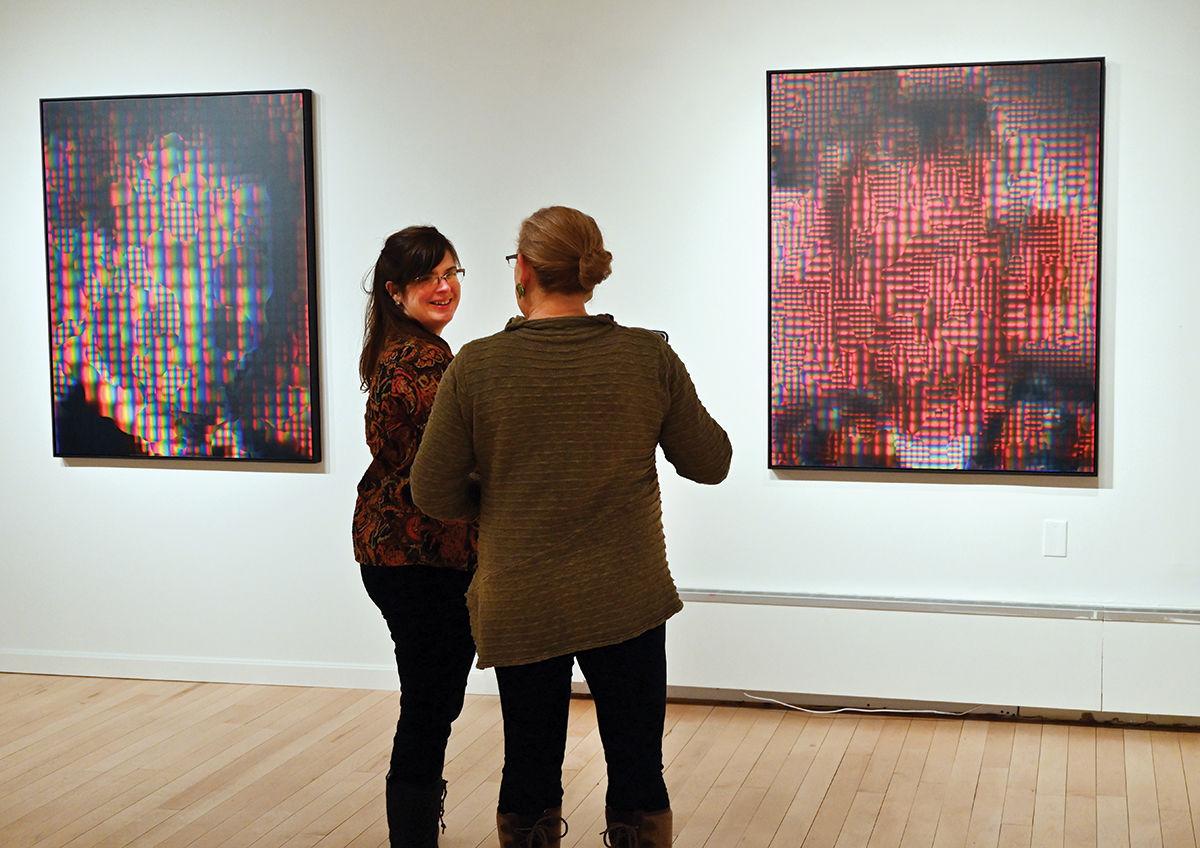 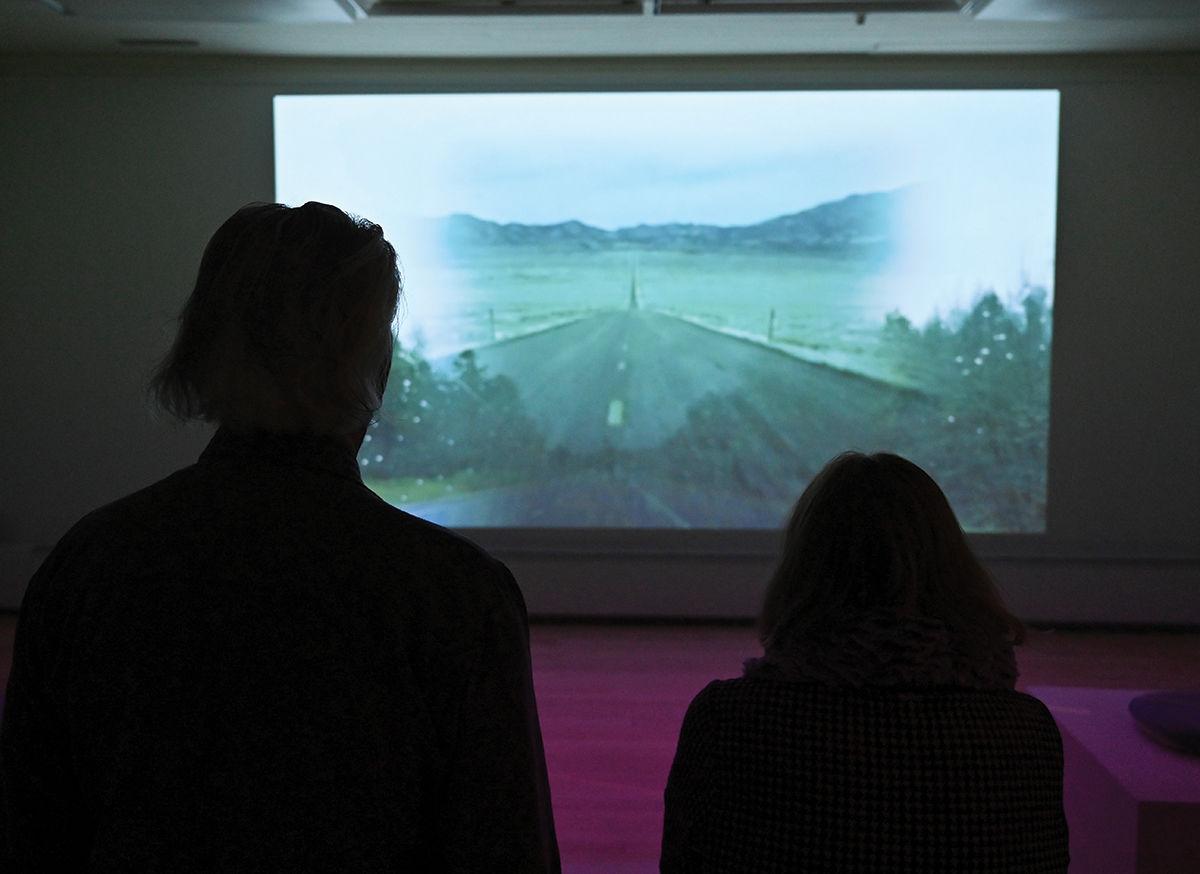 Footage from Molly Davies’s “Driving Dreams” of a road out west projected onto the wall. 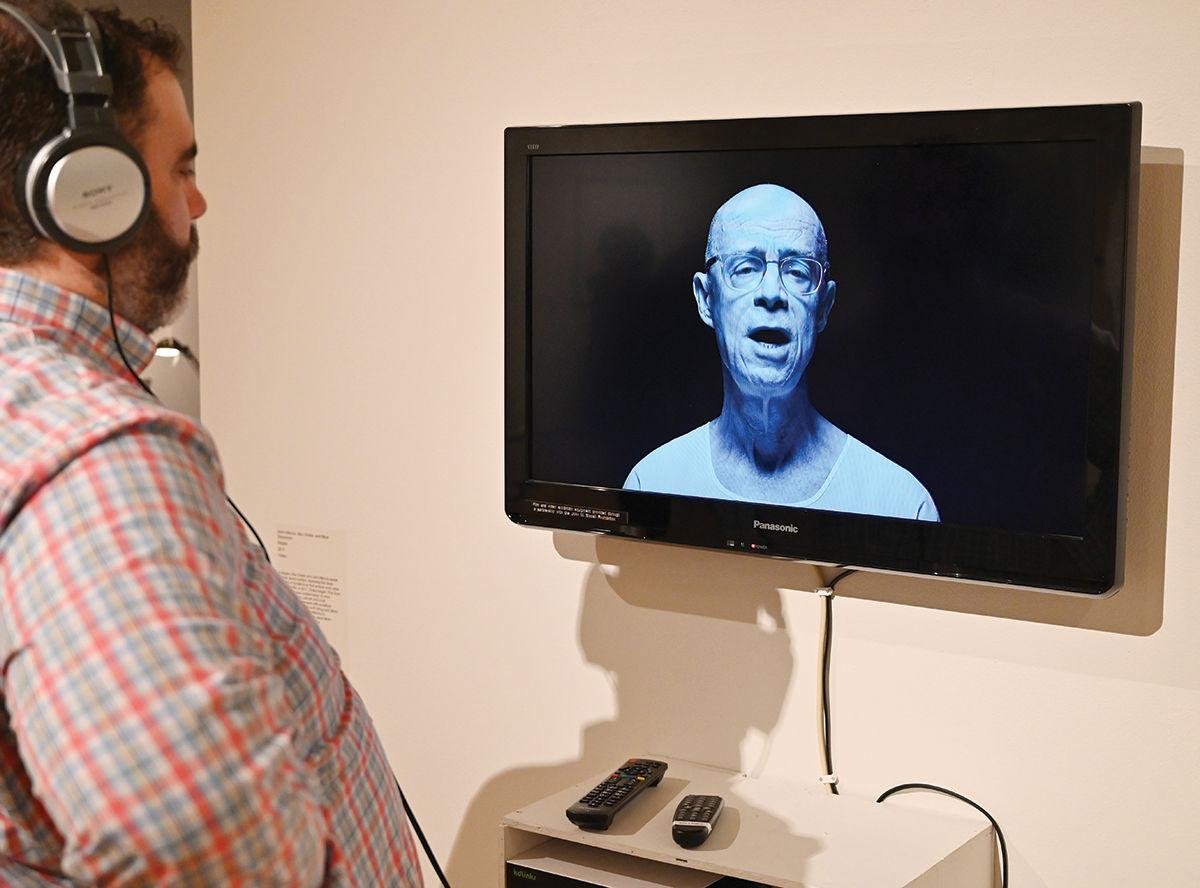 John Killacky speaks to his dead mother on screen in “Elegies.” 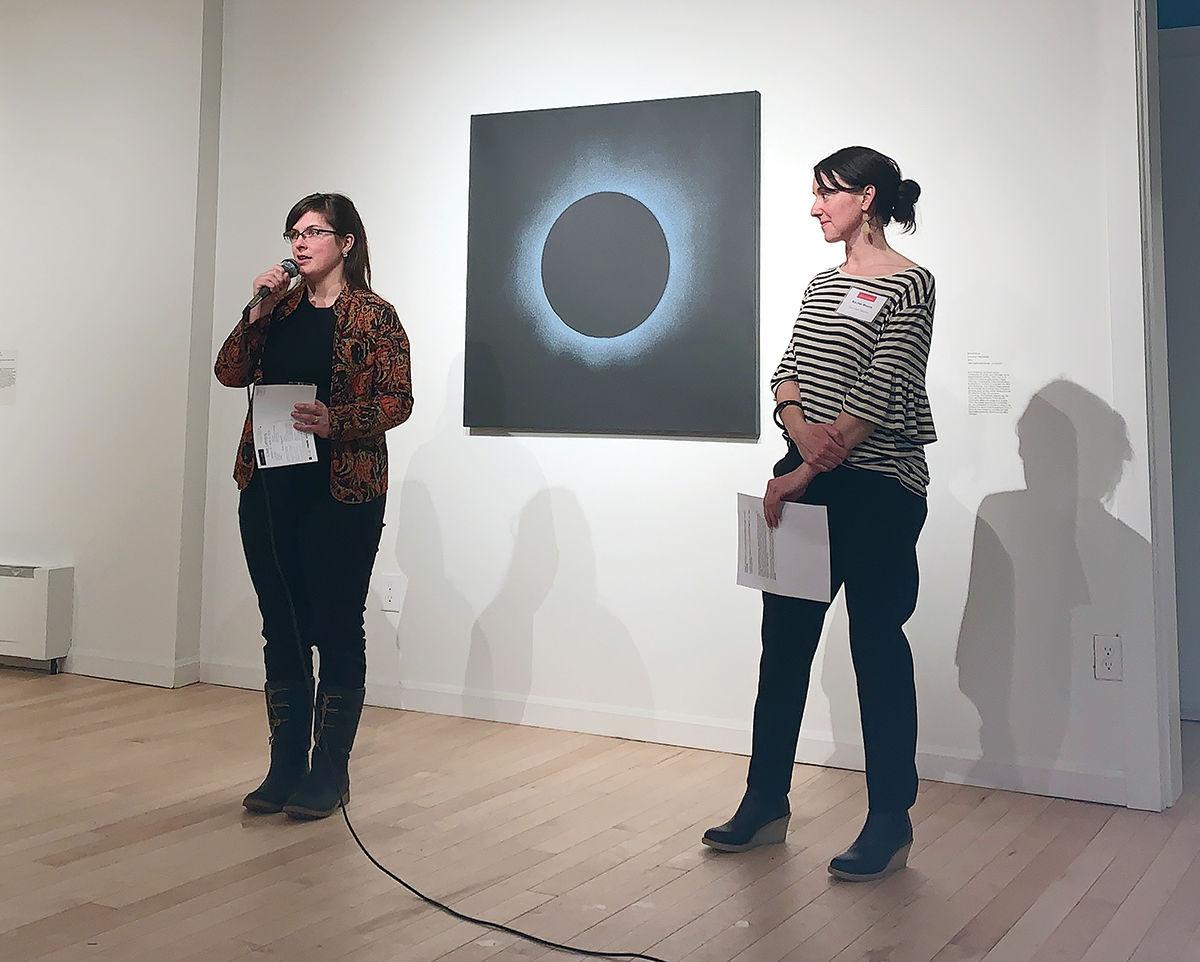 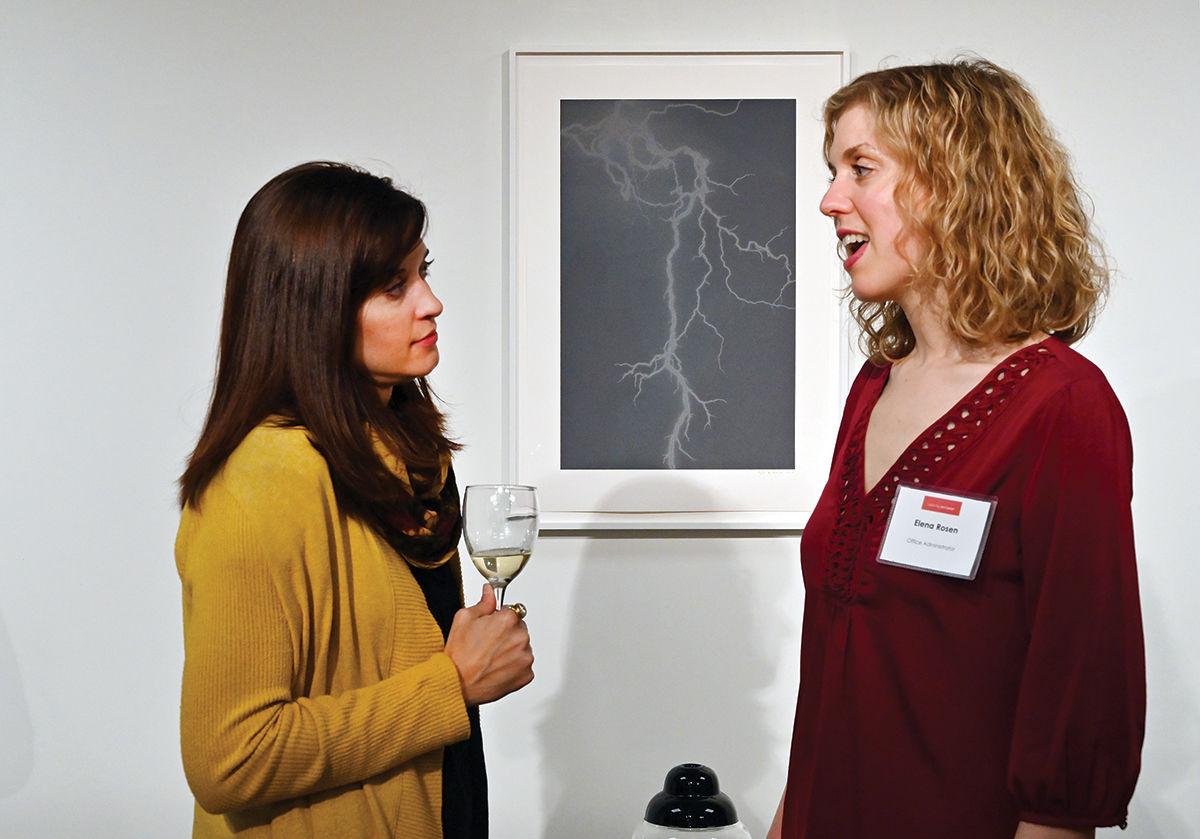 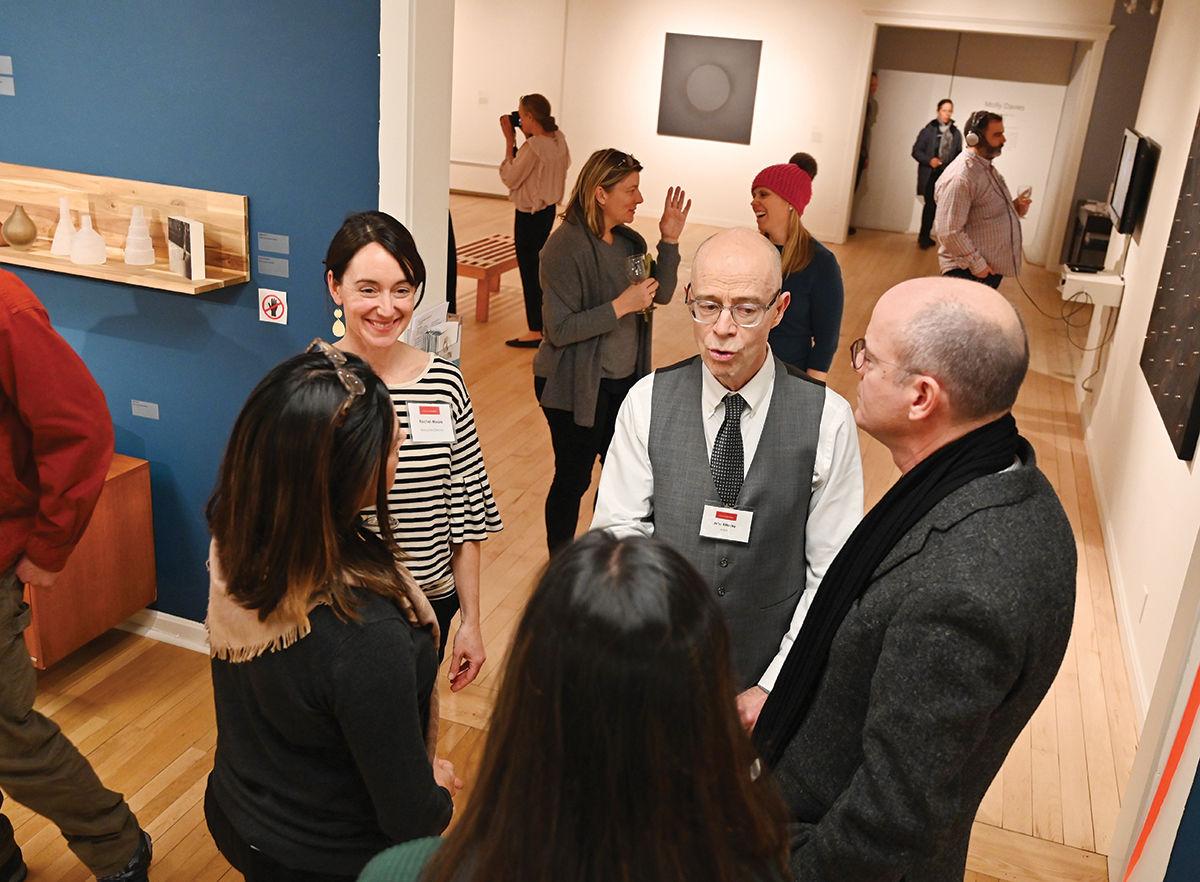 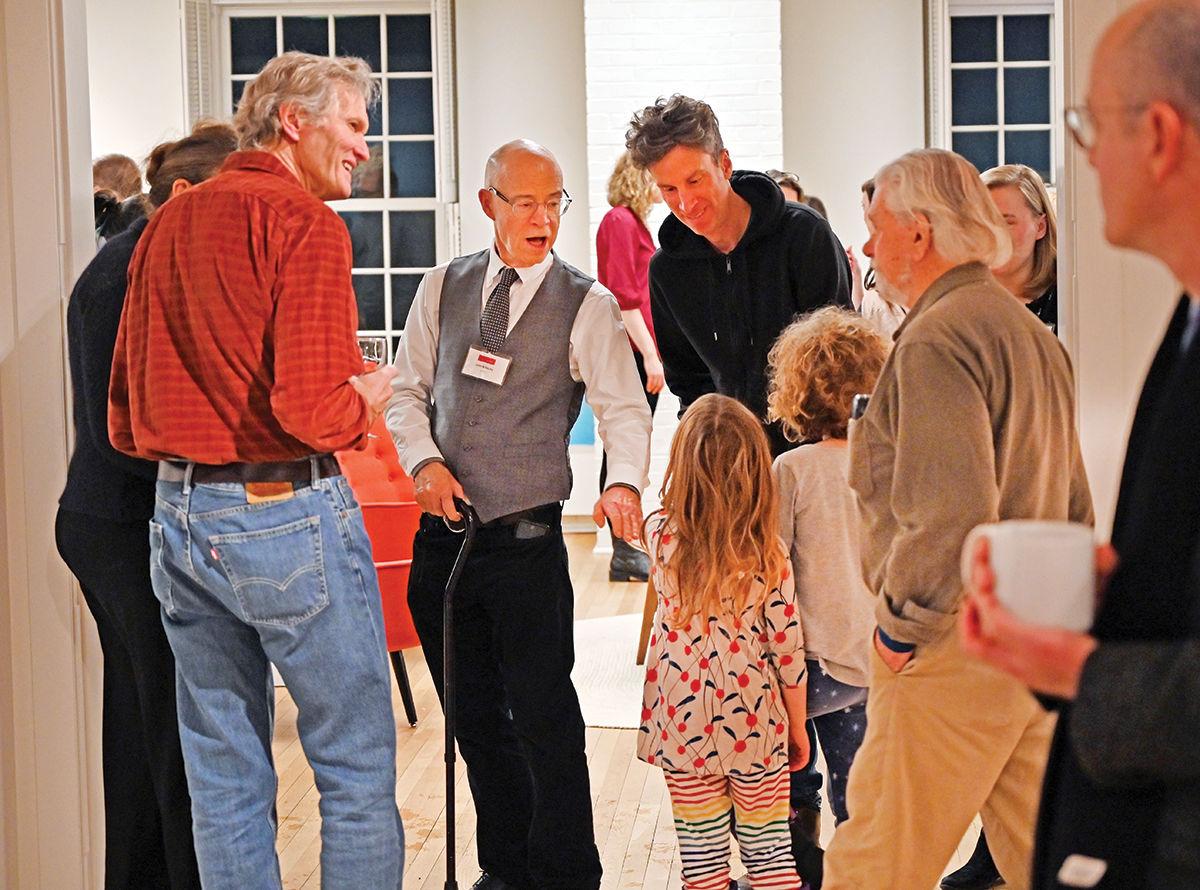 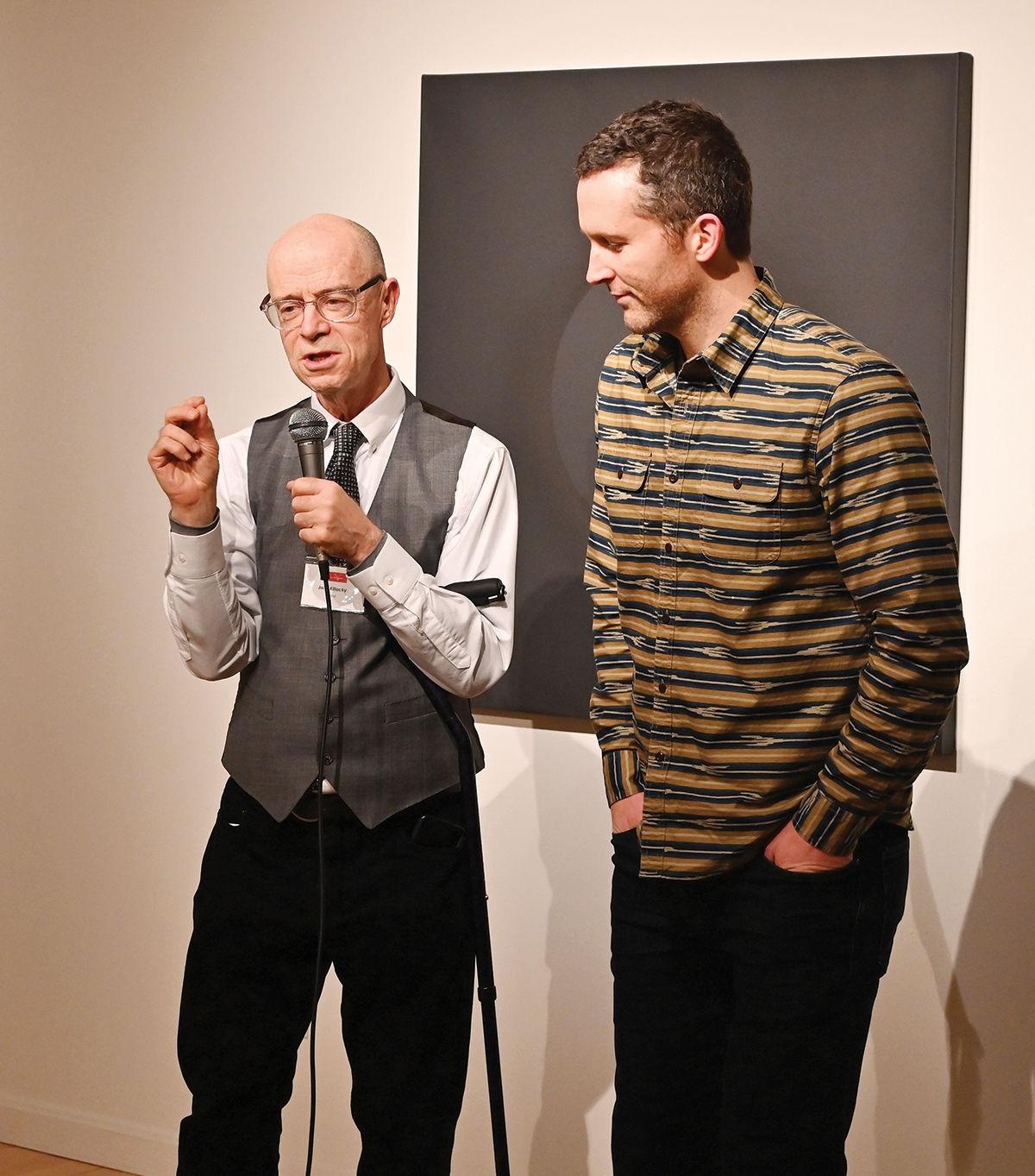 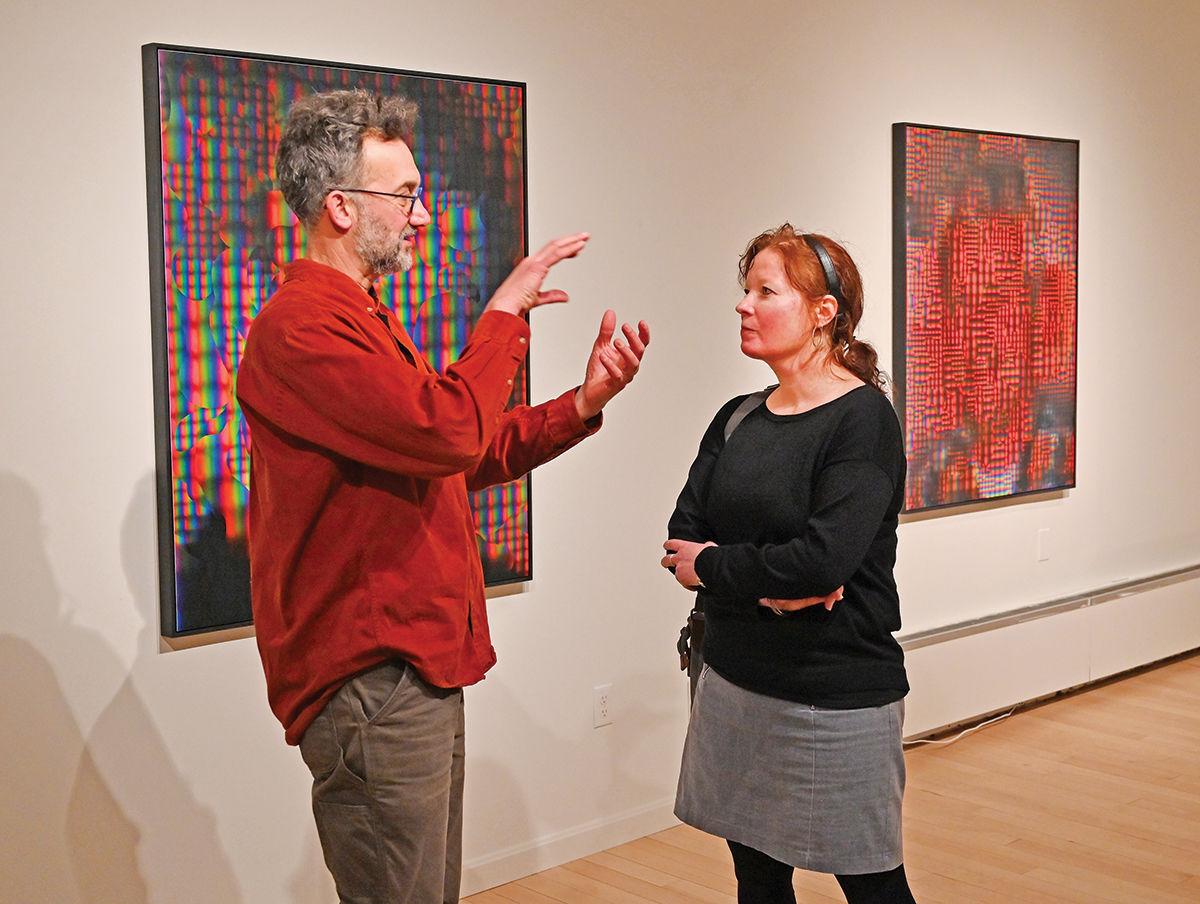 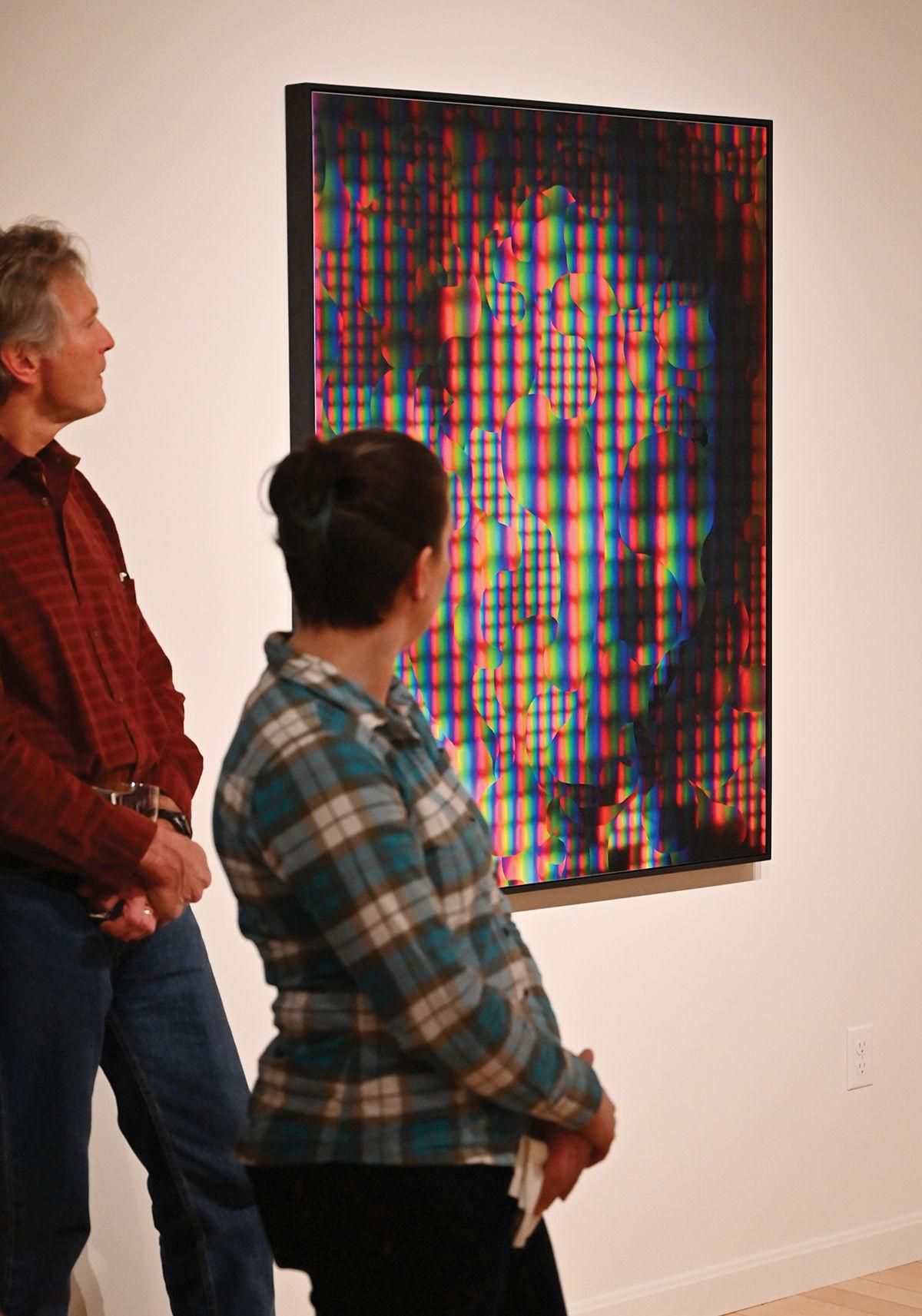 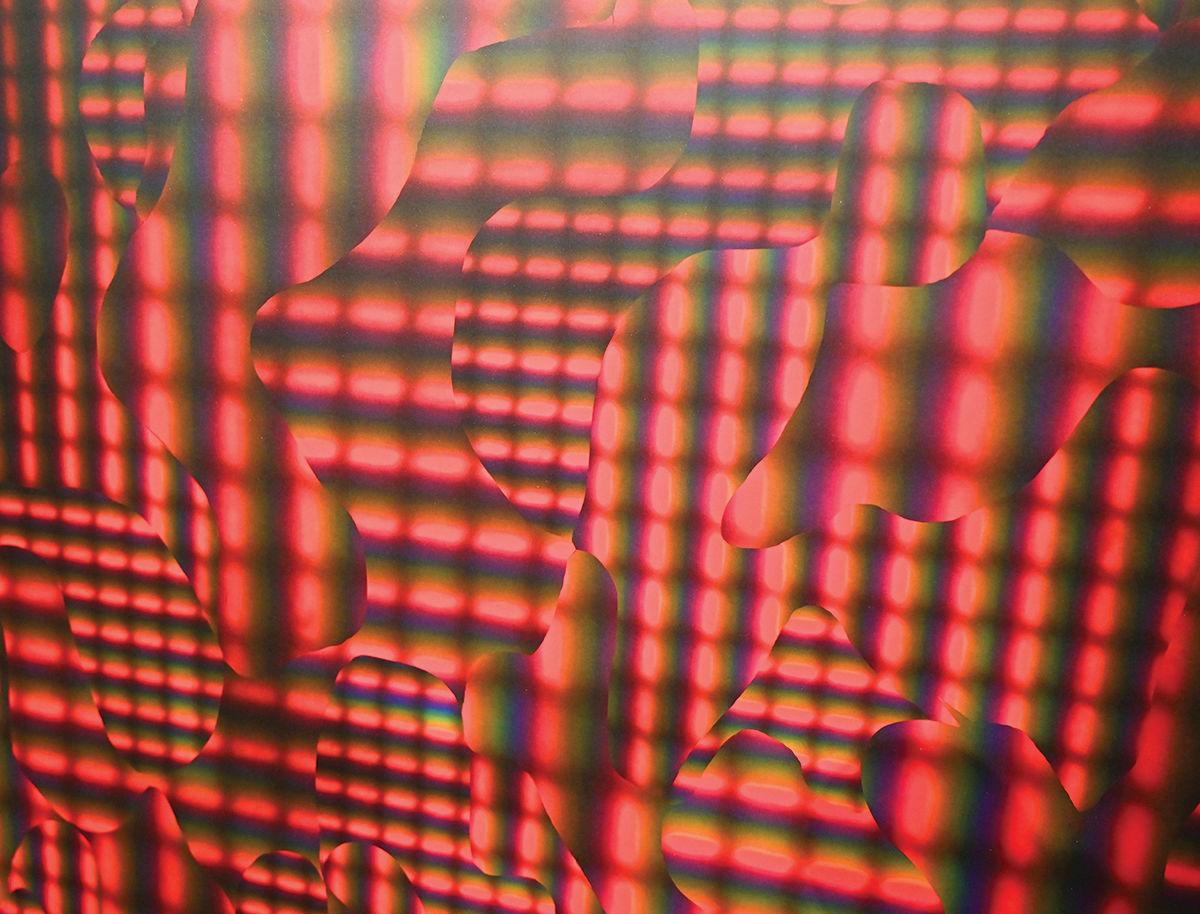 Visitors listen to a speaker at the opening reception of “Love Letters” at the Helen Day Art Center on Jan. 16.

What do liquid crystal display pixels, a solar eclipse, an elegy, a rainy Vermont highway and a scrap of paper found on a New York City sidewalk have in common?

Love, as expressed in the exhibit “Love Letters” at the Helen Day Art Center in Stowe.

The show features 11 pieces by nine artists working in different mediums that, together, express the feeling or concept of love. The scope is wider than a bond between two people, and the pieces delve into the loss of a loved one, a love unknown, and the pure splendor of nature as love.

With print, paint and video, the installations at the Helen Day evoke feelings through sight and sound.

This variety was curated with an underpinning theme of technology, in line with the Vermont Curator Group’s 2020 focus on bridging art with 21st-century tech.

“It’s just becoming such a digital experience,” said Rachel Moore, executive director of the Helen Day Art Center. People are inseparable from their phones these days, even while seeing art at a museum or gallery, and whether that’s a good or bad thing isn’t Moore’s focus. “Some encourage it and some don’t, but it always transforms the work.”

Some of the Helen Day pieces have a stronger connection to technology and love than others, but Moore said it’s the showing as a whole that expresses that undeniable emotion and “how love can be an undeniable change marker.”

These are a few of the installations, from printed portraiture, to abstract painting, to deep and conceptual video presentations.

Along the left wall are three portraits formed by enlarged red, blue and green pixels. Exaggerated and blotchy, these superimposed parts create a visceral whole. It’s clear there’s a face there, a person, but the more the eyes try to focus, the more the overgrown pixels pop and then meld into one another and then pop again.

“Unrequited Love 1,” “2” and “3,” by Jeroen Nelemen, a Chicago photographer and artist, are portraits of crushes he had in school. He looked them up on the internet and used the photos he found, enlarging portions until it left the subject unrecognizable, yet still undeniably human. A few steps back brings the details out — the face, collar and hair — but there’s still a distance there, like the visual representation of human connections from behind a computer screen. There are several degrees of separation between the viewer and the subject, the latter never clear or known to the former.

To the left of Neleman's work is a dark, square canvas. The black square is colored with thick, sweeping dark gray lines that resemble gears or wheels. The rest is covered in incomplete circles of sparkling crimson and metal spikes protruding from the fabric canvas.

What really grabs the viewer are the words written across the piece, in an inconsistent type between cursive and print, “1:45 am, eye’s open, full moon, last breath.”

Robert Buck, based in New York, found this written on a piece of paper on a New York City sidewalk shortly after his mother died, and the confluence of these events inspired his piece, “The Letter! The Litter (“1:45 am, eyes open, full moon, last breath)/South.”

It’s part of a larger series, in which Buck uses discarded writings he finds as the centerpiece of these stretched fabric canvases. The feeling is apparent. Between the red rings, the dark tone, and the literally sharp qualities of the work, it oozes pain from losing a loved one.

To the left of that is another painting by Buck. This black square has a dark gray circle in the center and the circle’s edges give off a slight sheen. It may look unassuming at a glance, but “iPainting (186230889)” has a lighter side. When photographed with a flash, the edges of the circle — made with light-reactive paint — are illuminated. The result is a monochromatic solar eclipse.

This is one of a larger series by Buck, all using alert paint — which contains tiny glass beads that refract light — to the same effect.

This, Moore said, was a more conceptual contribution to the exhibit. The viewer has to interact with the piece to witness it, and that interaction makes the painting whole. The viewer could see themselves in that eclipse, one of nature’s most visceral phenomena.

A letter to the dead

At the entrance of the exhibit is a television with a set of headphones. On the screen — in sharp black and white — are John Killacky, a Vermont legislator, and Eiko Otake, a New York choreographer. They’re dressed in plain white shirts and take turns speaking to the viewer in a video filmed by Brian Stevenson, a PBS production manager.

“Elegies” is a spoken-word letter to their dead mothers. Killacky talks about being with his mother while she was on her deathbed. He talks about his childhood, about how his mother always did her best to provide for him and his siblings. He talks about how she didn’t think she did enough, but was always there. She was someone he could count on, and she shouldn’t sell herself short.

Otake described her mother’s death, how she simply stopped eating and died naturally, “a good death.” Otake left Japan to work in the United States, and says her mother always understood that, when Otake visited, she couldn’t stay. She says her mother would wait for her calls, and how she failed her by not calling.

Killacky and Otake speak straight to the viewer. They barely break eye contact. It’s as if the viewer is their mother, and they’re making these confessions to the person behind the screen. The emotion is palpable.

Despite its melancholy matter, watching this son and daughter shed their guilt and show their love for their lost parents left an uplifting impression.

To the left again, tucked away in its own room, is a projector splaying a Molly Davies installation across the wall.

Davies has been shooting experimental videos for more than half a century, and “Driving Dreams” looks back at parts of that journey. This layered video shows transparencies of performance art, dancing, trains and a few other subjects prominently overlaying the windshield or window of a car driving down a Vermont highway on a rainy day. The only words are in the music, which is varied throughout the piece as the car keeps moving.

This piece is aggressively conceptual, but drives home an awareness of the past, present and future. The shots are often looking forward and back — through the windshield and the rear-view mirror — at that rainy Vermont road while videos of West Coast roads and the unmistakable Rocky Mountains are superimposed on that same shot. Trains and tracks are a large theme as well, possibly symbolizing a more strict route through life, bound to rails without the option to switch lanes.

“Driving Dreams” is as much about love as it’s about reflection, the journey ahead and the road behind.

• Thursday, March 12, 5:30 p.m., panel discussion of artists and scholars on art and technology.

The Julian Scott Memorial Gallery at Northern Vermont University-Johnson hosts a retrospective exhibit of mixed-media work by the late Cynthia Bowler of Vermont, through March 13, at 337 College Hill, Johnson.

Want to learn more about Stowe’s most recent, large land conservation deal? The conservation of over 750 acres in Stowe known as Brownsville helped to preserve 169 years of history of the farms, families and schools that formerly existed in Brownsville, now a mostly untouched wilderness at Stowe’s northern gateway.