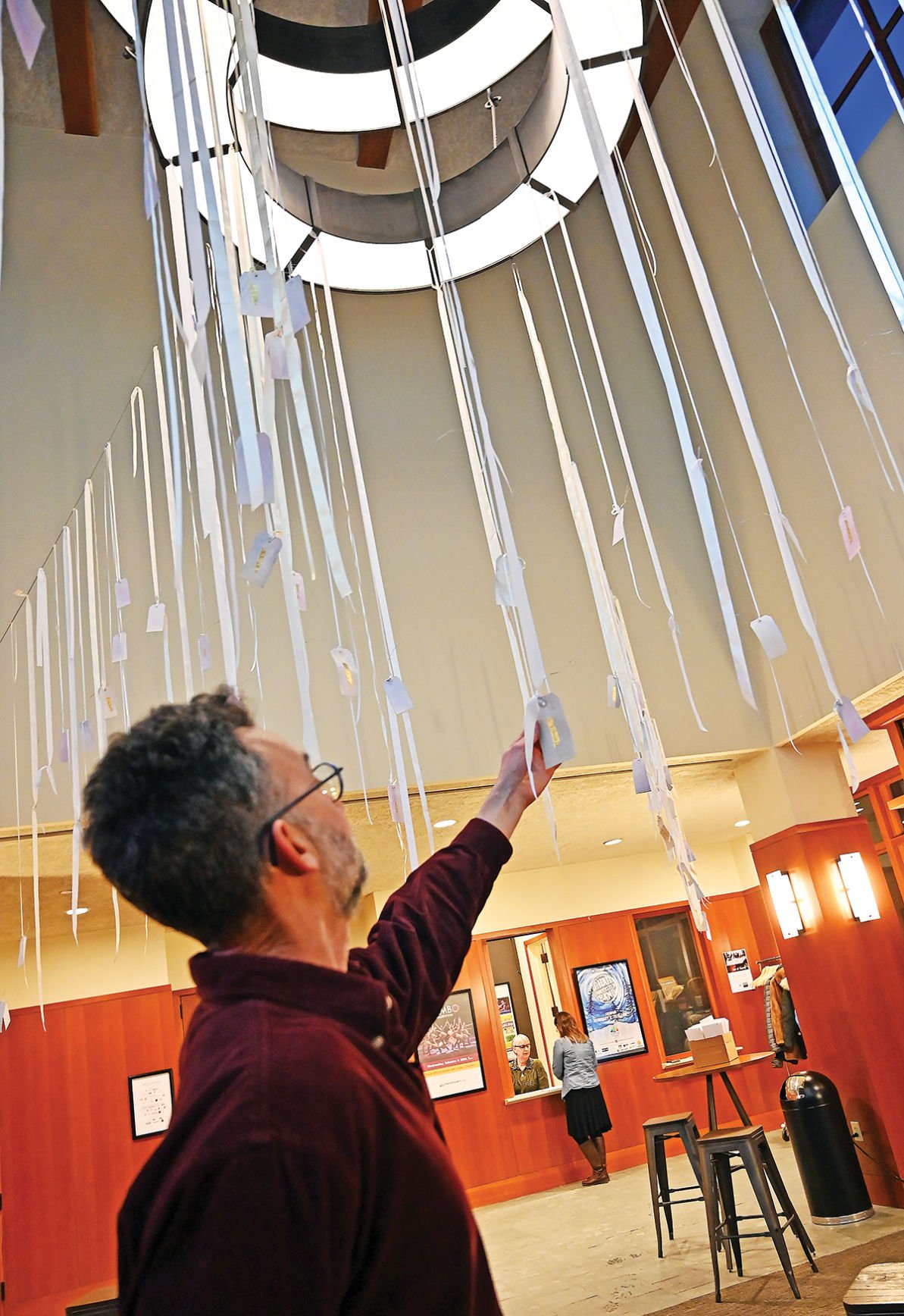 Susan Calza’s “Our Hour” breaks poetry down into individual strands. 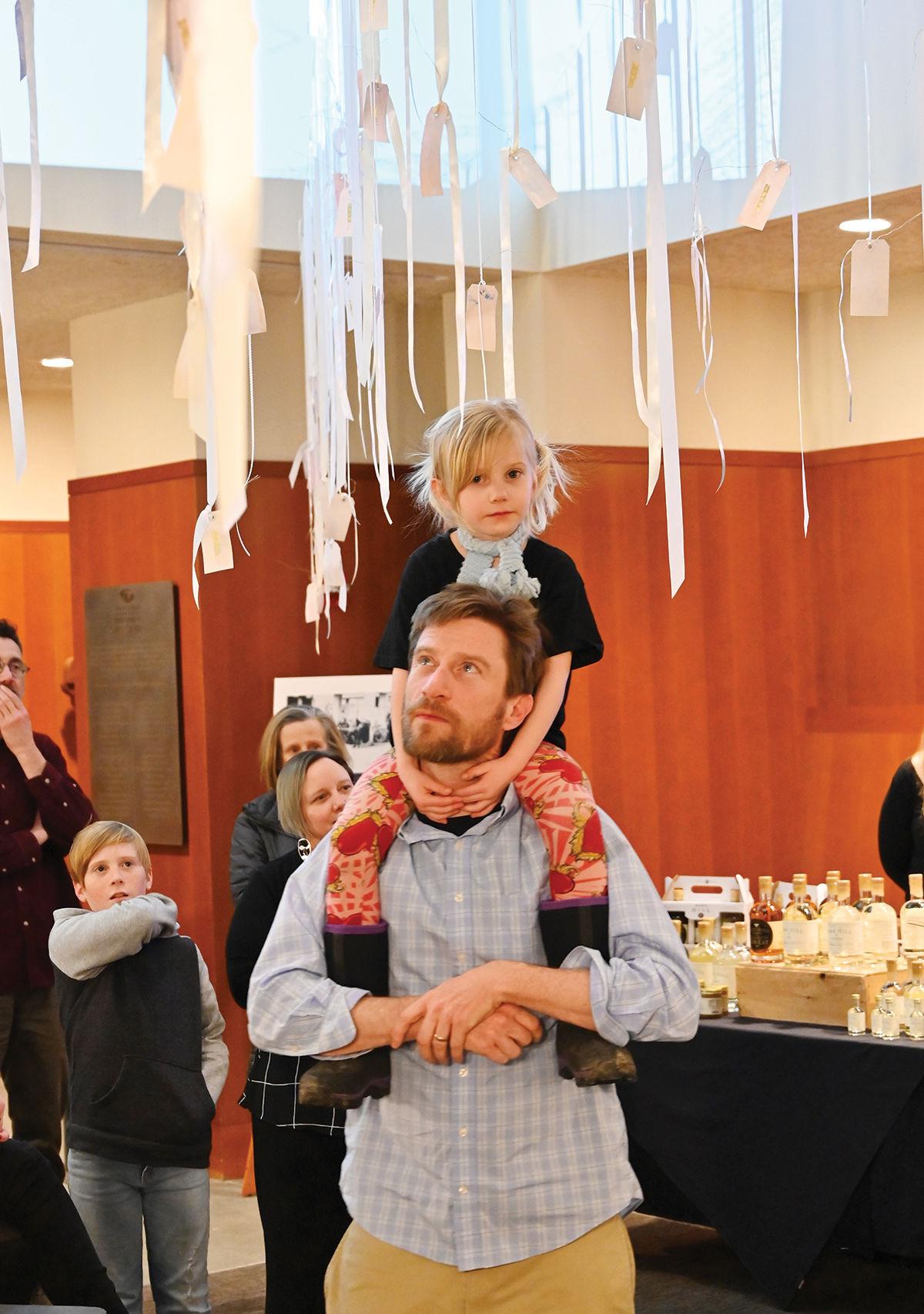 A young art fan with her head in Susan Calza’s “Our Hour.” 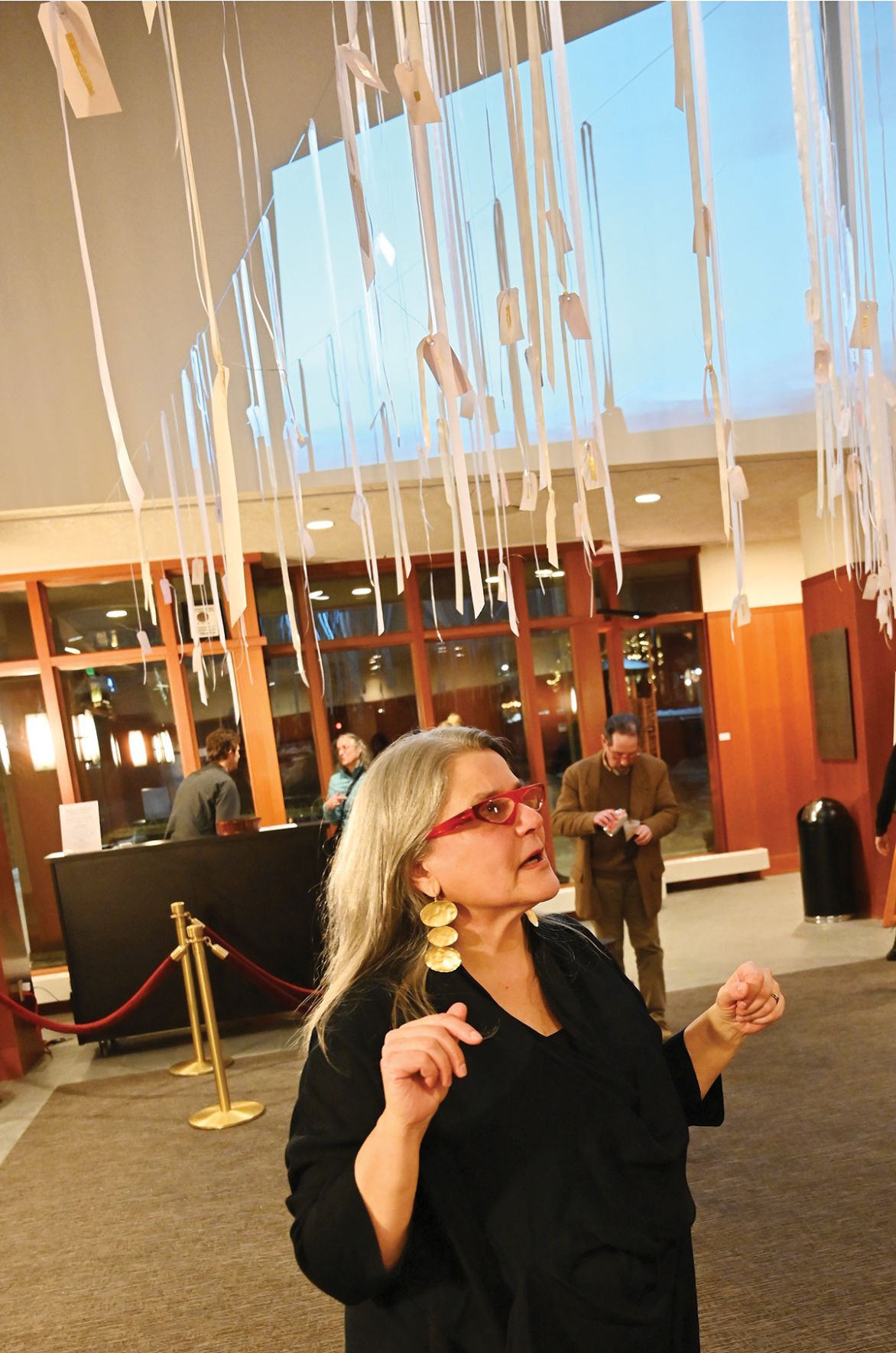 Susan Calza beneath her poem installation. 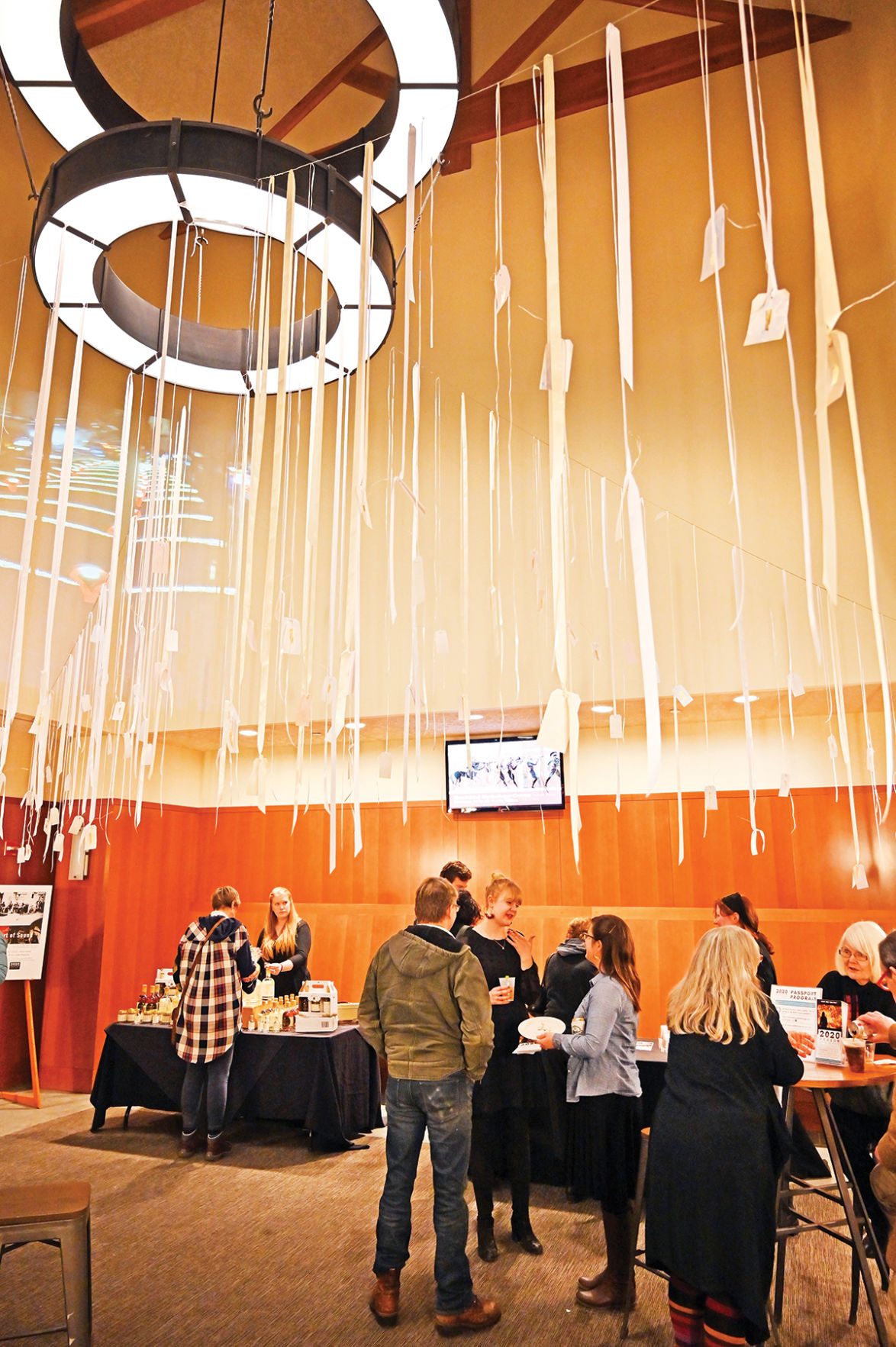 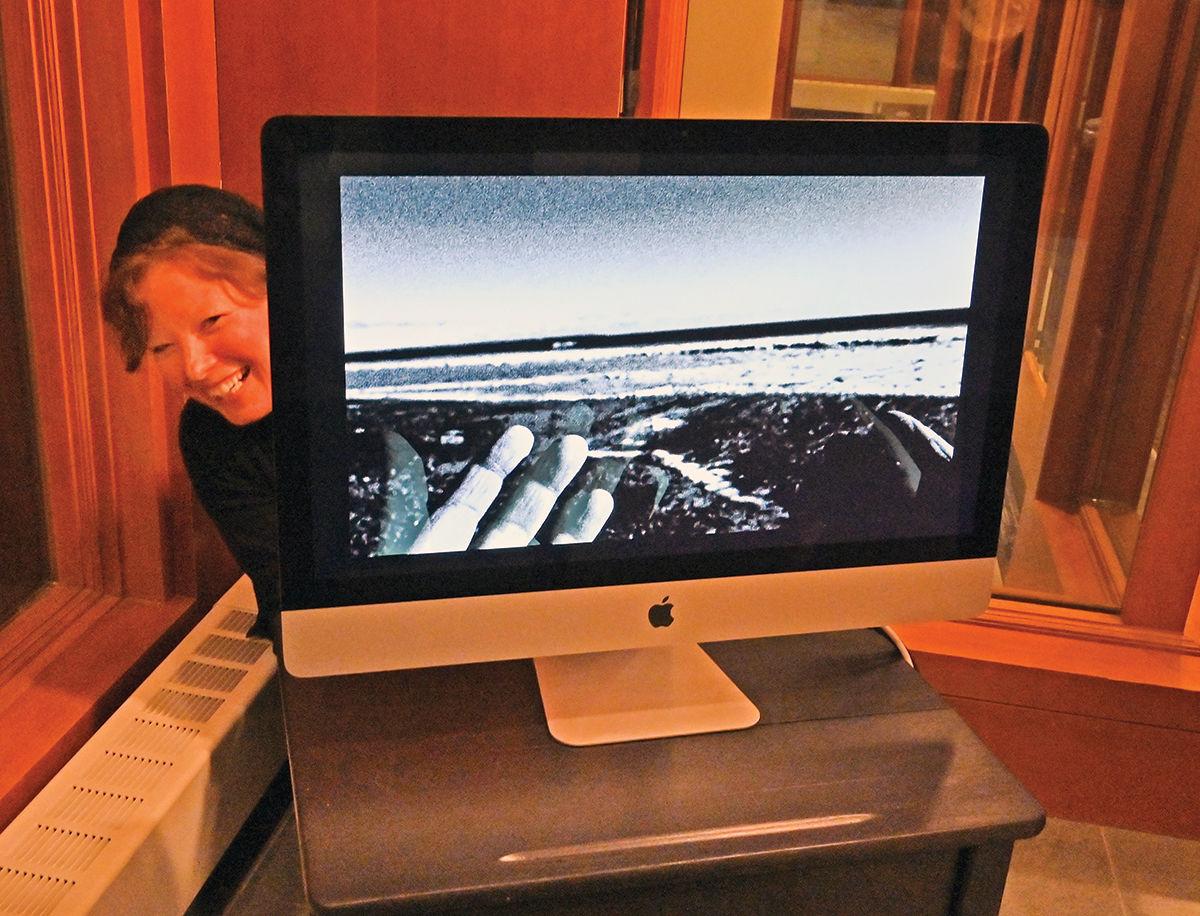 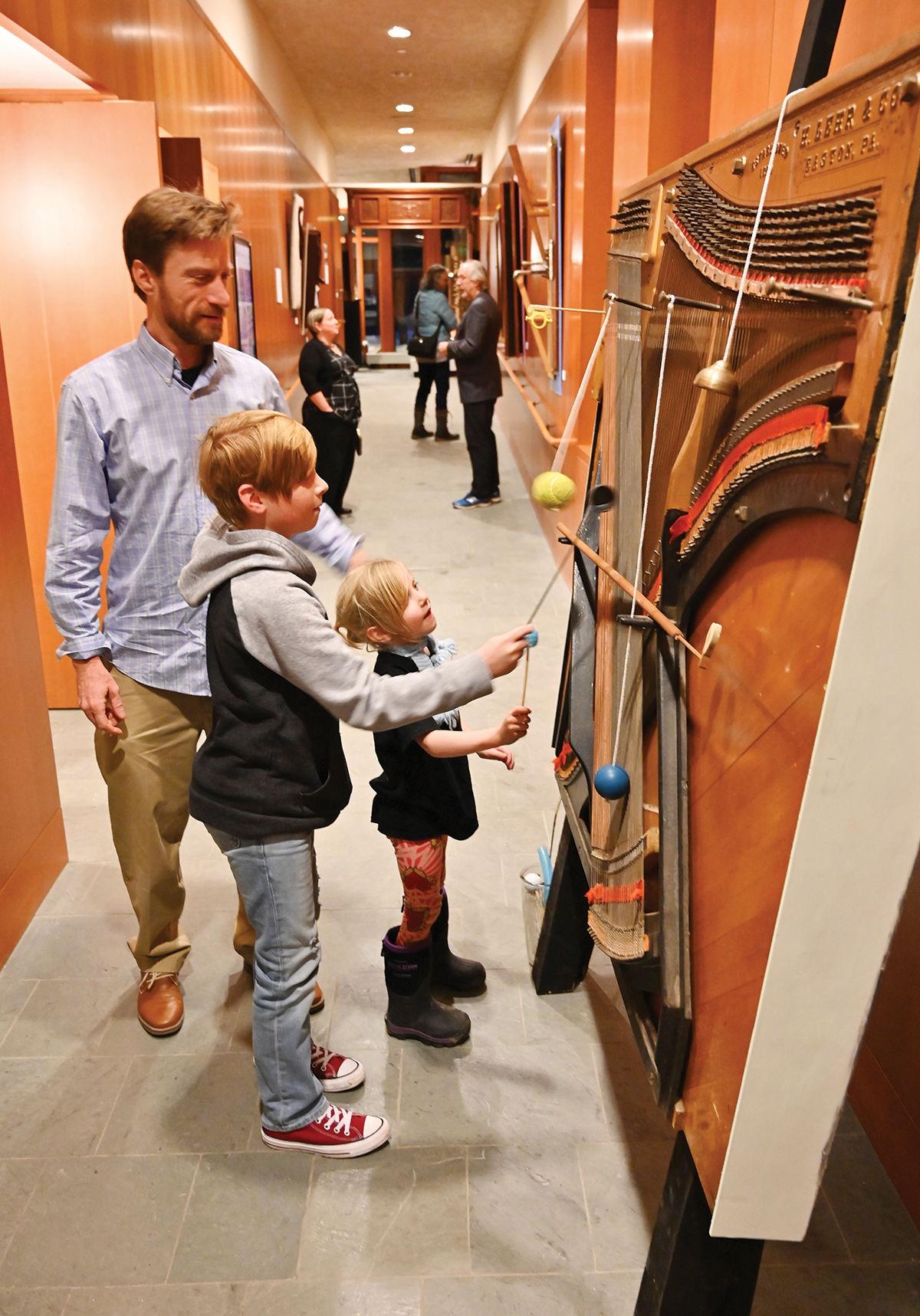 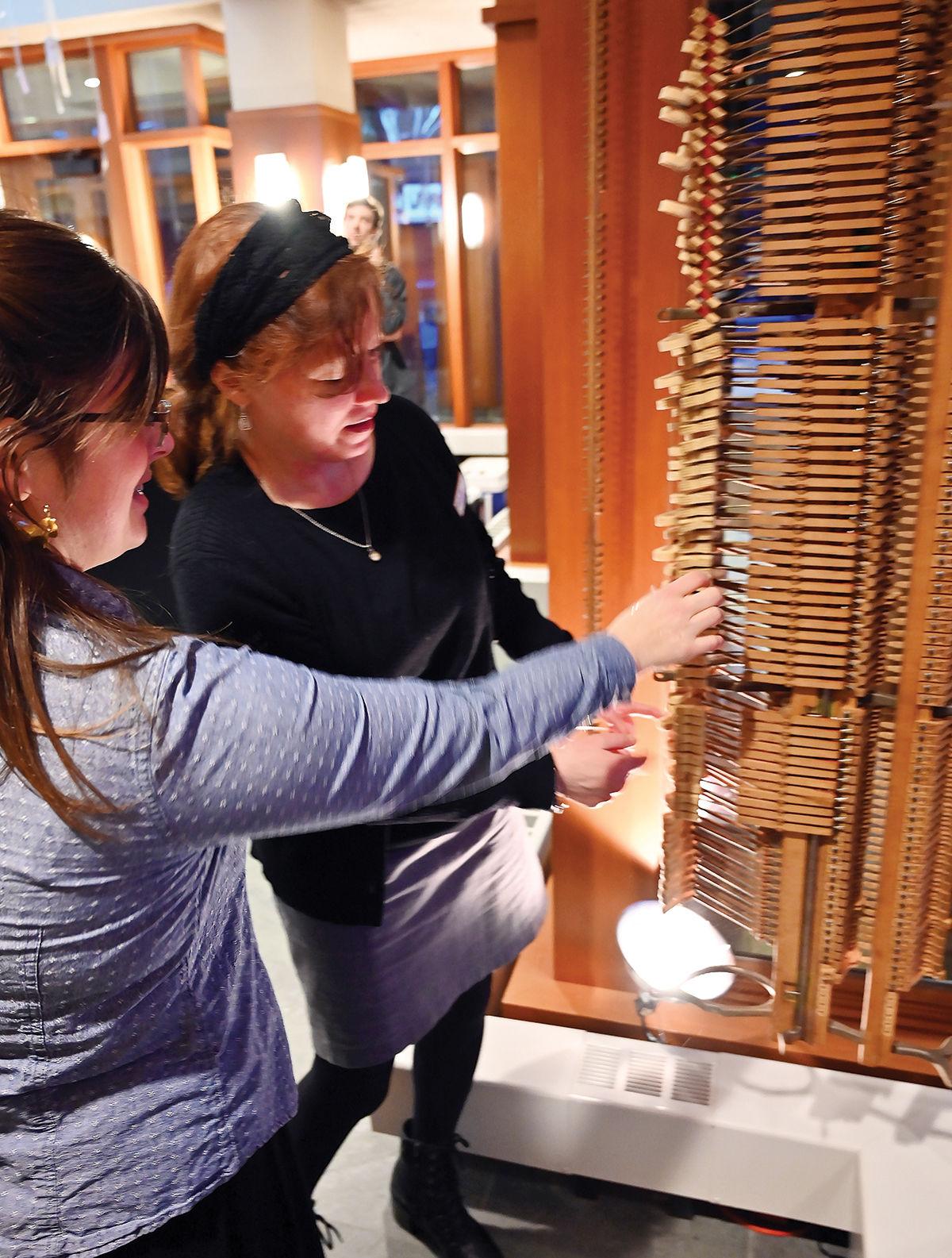 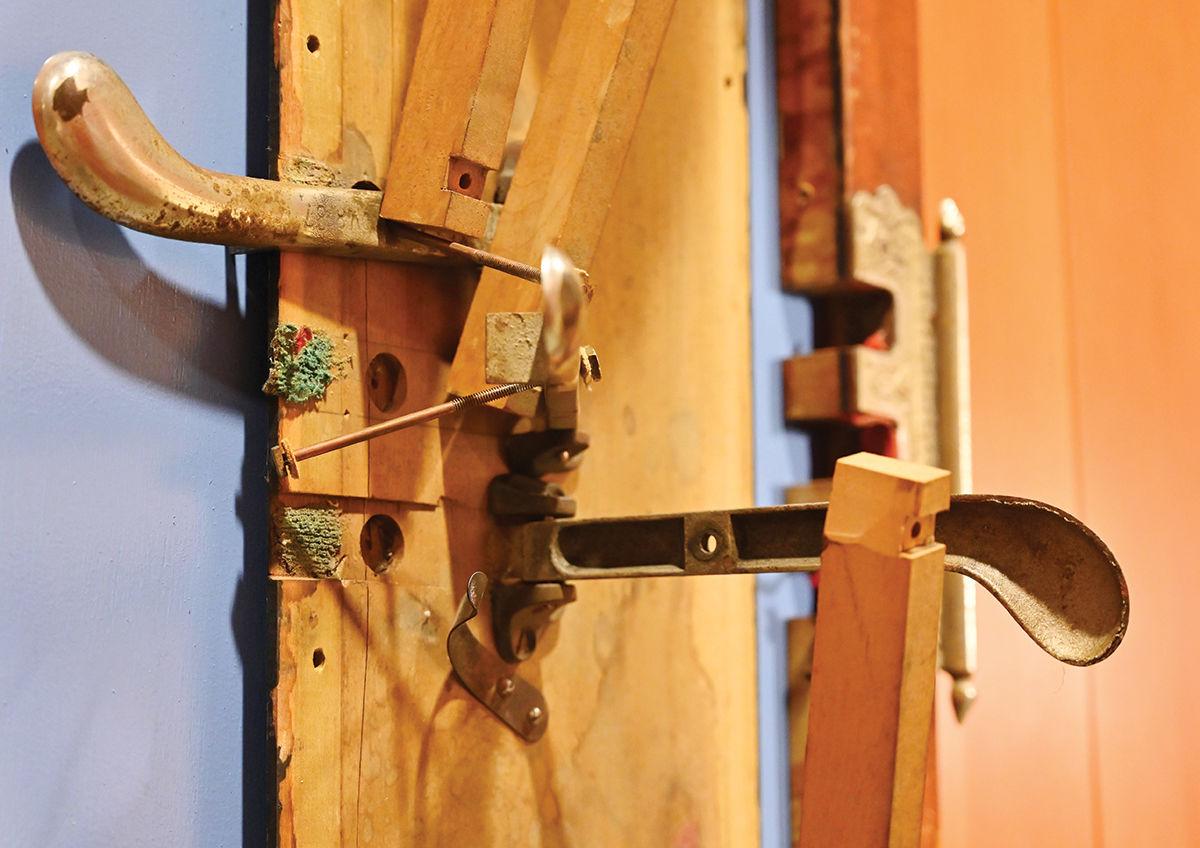 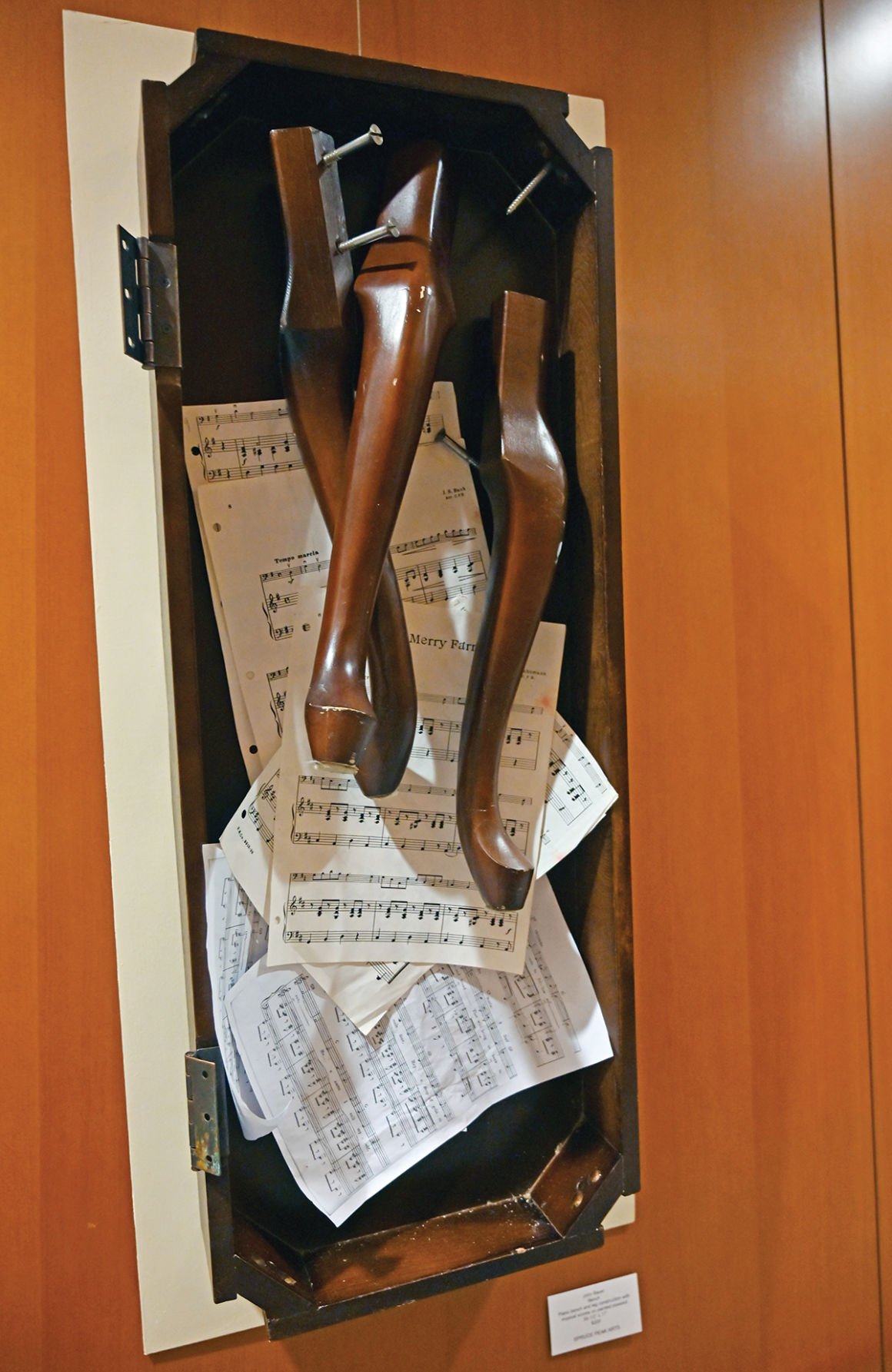 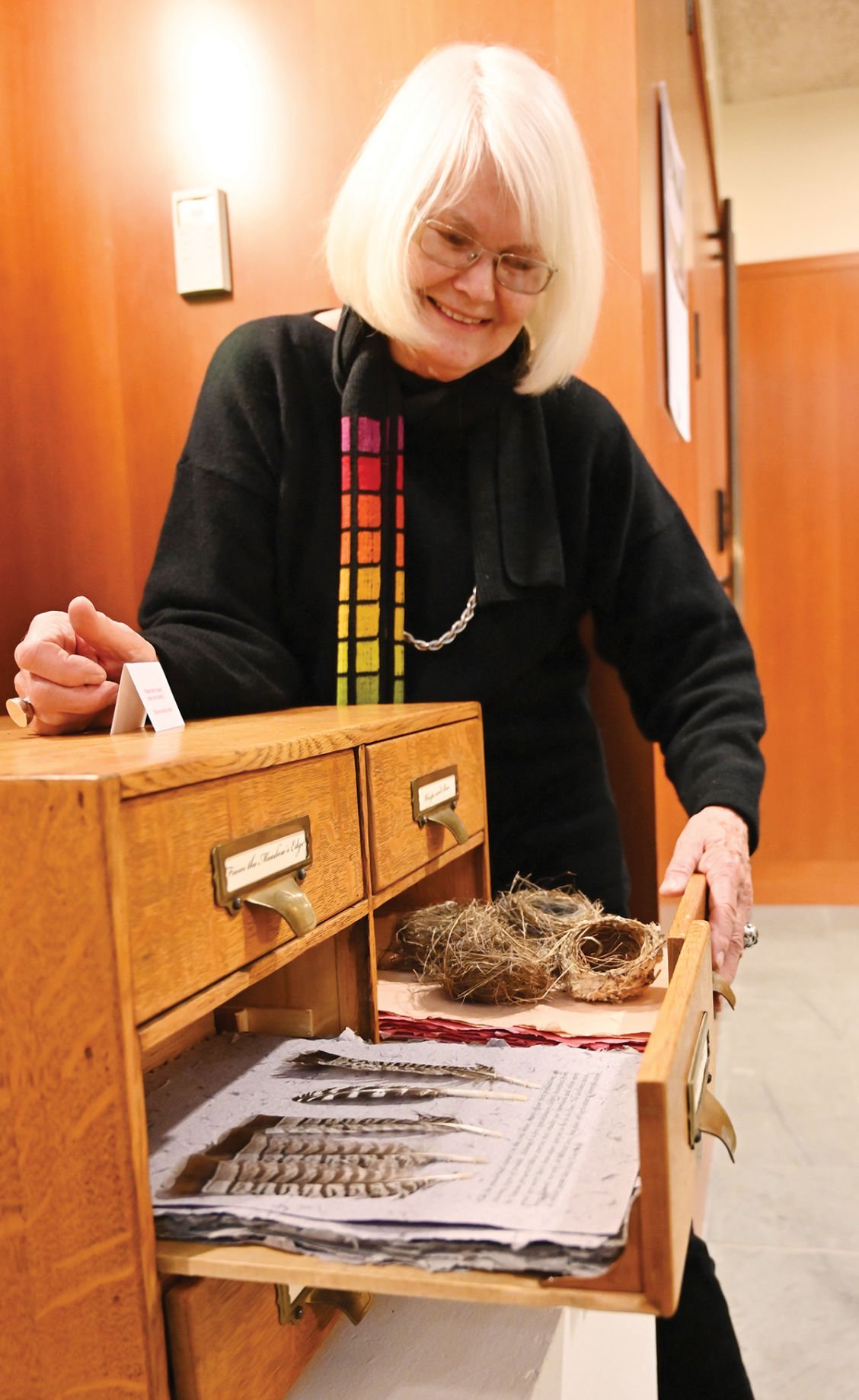 Taking a look inside Kathryn Lipke Vigesaa’s “From the Meadow’s Edge.” 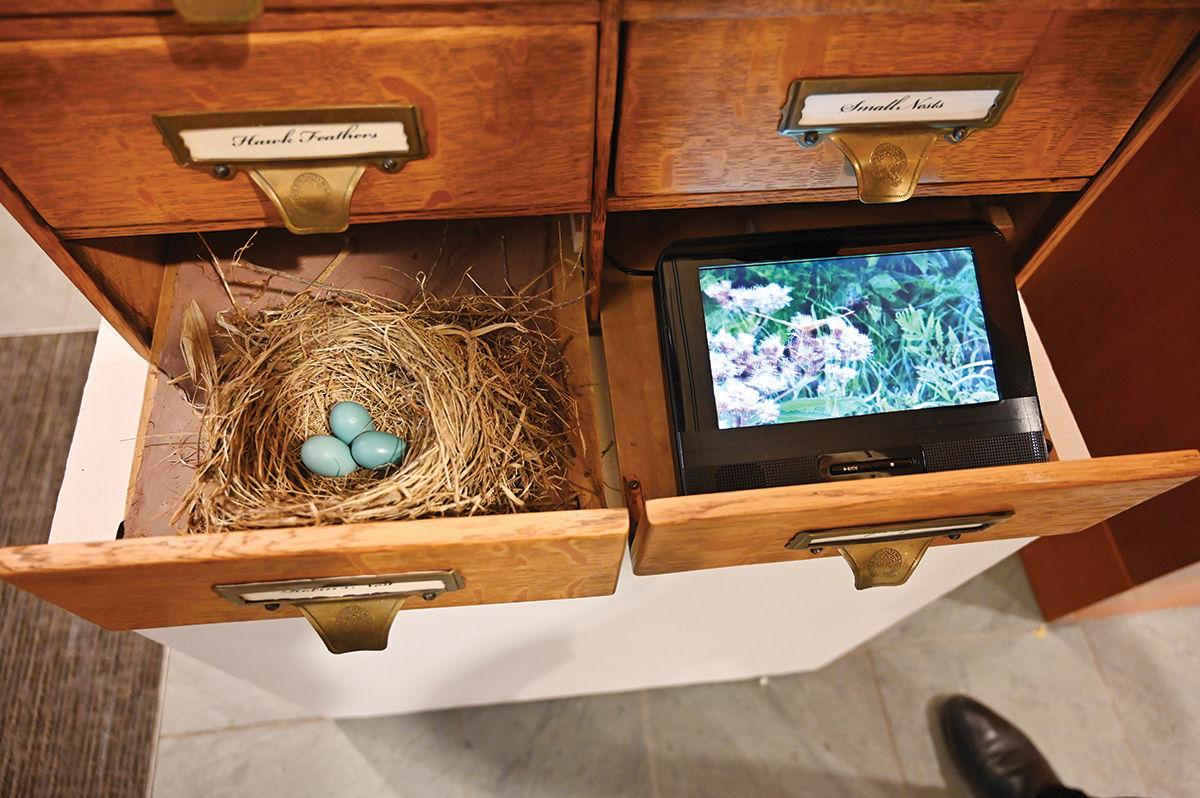 Susan Calza’s “Our Hour” breaks poetry down into individual strands.

A young art fan with her head in Susan Calza’s “Our Hour.”

Susan Calza beneath her poem installation.

Taking a look inside Kathryn Lipke Vigesaa’s “From the Meadow’s Edge.”

“The Art of Sound”

Or, wait, does it allow people to hear these things with their eyes?

There’s an old Indian parable about a group of blind men who come across an elephant, and try to describe what it is, based on their limited access to the large beast. Is it just the tusk, the trunk, the tail, the flank? Is it the sum of those parts? John Bauer’s piano is like that.

One part of the piano frames the hallway, a squared-off arch welcoming you to pass through into its working. The innards of the piano are strewn about, as if by a very orderly pack of coyotes with impeccable curatorial skills. The action, in particular, looks like the spine of a huge, mellifluous beast, like an elephant made of wood.

Bauer, in his artist’s statement, said his intention in deconstructing his instrument “is to bring a different attention to the piano by flattening it to be experienced in new ways.

The Art of Sound: Piano

An exhibit-goer plays with the inner workings of artist John Bauer’s deconstructed piano.

The payoff is truly experiential. Hidden from sight inside a piano are more strings than any stringed instrument, but the instrument remains part of the percussion family. That whole network of steel strings is displayed here, with a racquetball and a tennis ball, and a small metal bell, hung from strings and ready to swing out and bounce back against the bass and treble strings.

A jar of everyday implements sits nearby for viewers/listeners to play the art piece. Spruce Peak education and services director Julianne Nickerson shared a video on her phone of a young girl plucking out Beethoven’s “Ode to Joy” on the strings. Nickerson said the girl simply, through trial and error, figured out how to play the piano piece without seeing the black and white keys.

In another piece, artist Kathryn Lipke Vigesaa has filled an old library card catalog — there are no new such things. Each card drawer features a small installation representing different bits of nature along with foreboding observations on nature’s endangerment.

One installation consists of five feathers affixed to homemade paper with a paragraph noting, in a matter-of-fact tone, bird populations are in decline because of human agricultural practices.

A scene in another drawer features snatches of paper, a wasp nest and a dead honeybee, along with another observation that the “hyperfocus” on the decline of honeybee populations misses the larger picture, which is the plight of other pollinators, such as butterflies, bats and hummingbirds.

A drawer that remains open contains a tablet playing a loop of nature sounds and imagery. Close that drawer, and the art piece becomes muffled, all but silent.

Another exhibit, at the dead-end of the gallery hallway, is a rusty old barrel that artists Sean Clute and Otto Muller call “Rural Noise Ensemble.” As the exhibit description notes, the artistic elements include a barrel of Tuff-Kote sealant and a tree branch, both harvested from a creek bed in Woodbury, “automated in perpetual friction.”

The Art of Sound: Rural Noise

At the dead-end of the gallery hallway, is a rusty old barrel that artists Sean Clute and Otto Muller call “Rural Noise Ensemble.” As the exhi…

The result is a constant whirring and scraping, as the junk turns and turns and turns, not quite scraping the bottom of the barrel, but not far from it.

The artists’ inspiration seems to stem from “a projected edgespace” between the human-made concepts of civilization and nature.

“On one scale, these edgescapes encompass entire communities and cultures,” the artists’ statement reads. “On a smaller scale, these edges exist as a matrix of forgotten lines, marked with discarded tires and rusted fuel cans: the line where some forgotten dweller decided ‘up to this point is my yard. Beyond it, my junk pile.’”

If “The Art of Sound” is, ultimately, a paean to the noises that humans make, Susan Calza is there to remind us we haven’t been doing it very long.

A poem by Calza, “Our Hour,” notes that humans — and their voices — have been around for only 0.0033 percent of the Earth’s existence, “kind of a miracle and it’s not miraculous at all.”

“Our Hour” already plays with sound in its homophonic title, an internal echoing of a morpheme. As part of the exhibit, Calza is heard reading the poem over snippets of looped video, mostly black and white, featuring panning shots of trees, static shots of snow falling, water running, wind blowing, birds alighting and taking off from a rooftop TV antenna, a dropped-camera’s-eye-view of a church or cathedral ceiling. There are long moments of silence, punctuated by short bursts of sounds, punctuated further by Calza dropping a line or two of her poem.

“It’s a short time that we’ve been here. We’re still here. For a short time,” the poem begins and ends.

“Our voices are the texture of our lives,” Calza recites somewhere in the middle. “They are fleeting notes entering air and penetrating our consciousness.”