You have permission to edit this article.
Edit
Home
State And World
Calendar
Special Publications
Multimedia
Marketplace
Classifieds
Contact Us
Follow Us
Donate
1 of 3 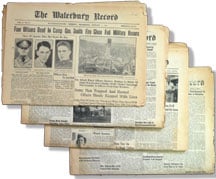 The Stowe Reporter company is launching a new community weekly newspaper in Waterbury at the end of January, and in the process it is reviving a historic name.

The newspaper, the Waterbury Record, will be published Thursdays starting Jan. 25 and will be mailed to every home and business in Waterbury, Waterbury Center and Duxbury. It will have an initial circulation of 4,000.

The Waterbury Record is not new to central Vermont journalism. In 1895, a weekly by that name was established, with Harry C. Whitehill as editor and manager. Whitehill later became the owner of the paper, and started WDEV radio.

In later years, U.S. Sen. Patrick Leahy’s parents published the newspaper until they founded Leahy Press in Montpelier in 1946.

“Friends in Waterbury know that I’ve wanted to do this for a number of years, but anyone who knows me also knows that I won’t make it a halfhearted attempt,” said Biddle Duke, publisher of the Stowe Reporter. “Waterbury is a great community and deserves a good paper to match. Doing it right required careful planning and good people, and we’re on target with both those things now.”

Maria Archangelo will be editor and publisher of the new paper. Archangelo, the former editor of the daily Barre-Montpelier Times Argus, was the editor of a chain of community weeklies in Maryland that were owned by The Baltimore Sun.

For Archangelo, the new paper is chance to return to journalism that “connects with the community.”

“Waterbury is a vibrant, growing community that deserves a weekly newspaper that reflects that reality,” she said. “We want to bring readers the news that touches their daily lives — births, wedding announcements, information from community meetings, neighborhood news and high school sports.”

The paper will also run letters to the editor and local editorials.

Archangelo joined the Stowe Reporter in October as the paper’s associate publisher and executive editor. One of her first duties was the planning and launch of the new newspaper.

She said she hopes to bring the Stowe Reporter’s level of commitment to community and journalistic excellence to the Waterbury paper. In the past three years, The Stowe Reporter was named best weekly paper in the state once and was awarded second place twice.

“The award-winning Stowe Reporter is the perfect example of how to maintain strong journalism at a community newspaper,” Archangelo said. “It has a solid base of readers and advertisers who contribute mightily to the content of the paper each week. We are striving to build those same kinds of relationships with the readers and advertisers in the Waterbury Record.”

She said she is looking for free-lance writers and local columnists for the new paper. Anyone who is interested can e-mail Archangelo at marchangelo@waterburyrecord.com or call 802-253-2101, extension 29.

Archangelo has hired Monica Mead of Duxbury to be the Record’s first full-time reporter. Mead has worked as a free-lancer covering Waterbury for the Times Argus and is a regular contributor to Strictly Business, a monthly business newspaper.

Ken Squier, owner of WDEV radio, says his station was “spawned” by the Waterbury Record.

“Whitehill, the DEV founder, and editor-publisher of the weekly Waterbury Record, believed that an informed local community was essential to what he held dear,” said Squier. “He wrote most of his editorials. He energized local politics. He used his paper and his radio station to promote Vermont and what he believed it stood for.”

Squier said he hopes Whitehill’s “devotion to stories that were relevant to the community will continue to foster that sense of caring and concern that makes Vermont towns and villages so worthwhile, so special.”

He said he is pleased to have the Waterbury Record back in town.

“Waterbury is a wonderful place. It’s nice to think it has its weekly Record back,” Squier said.

For financial reasons, for the first several months at least, the Record’s offices will be located at the Stowe Reporter in Stowe.

Archangelo said she is interested in having an office in Waterbury after the paper gets established, perhaps leasing space in an existing office for a receptionist/classified ad-taker.

“We don’t need a lot of space, but we want to have a physical presence in the community,” she said.

The Waterbury Record will be part of an advertising partnership with the Stowe Reporter and the Valley Reporter. It will also be part of the Burlington Area Newspaper Group, a group of community newspapers, including Williston, Shelburne, South Burlington and Charlotte, that cooperate on advertising sales.

Archangelo and Mead have been meeting with community members and business leaders to get their ideas and support for the new newspaper. The feedback has been encouraging.

“This is exciting for Waterbury and for those of us who are doing it,” said Duke. “Launching a paper is a wonderful thing for a community. The paper will be a dynamic work in progress, and that’s part of the thrill. If it’s working right, every week the pages will reflect the conversations, letters, thoughts, ideas and, yes, even complaints of the people who’ve taken the time to contribute to their paper. Because, in the end, weekly papers belong to their communities.”

Archangelo encourages anyone with story ideas or news for the paper to contact her.

“We want readers to know that we want to be part of the Waterbury community,” she said. “It is their newspaper, too, and we are anxious for them to be a part of it.”

It is hard to believe that we started the Waterbury Record nearly a year ago. During that time we — perhaps I in particular — have learned a l…