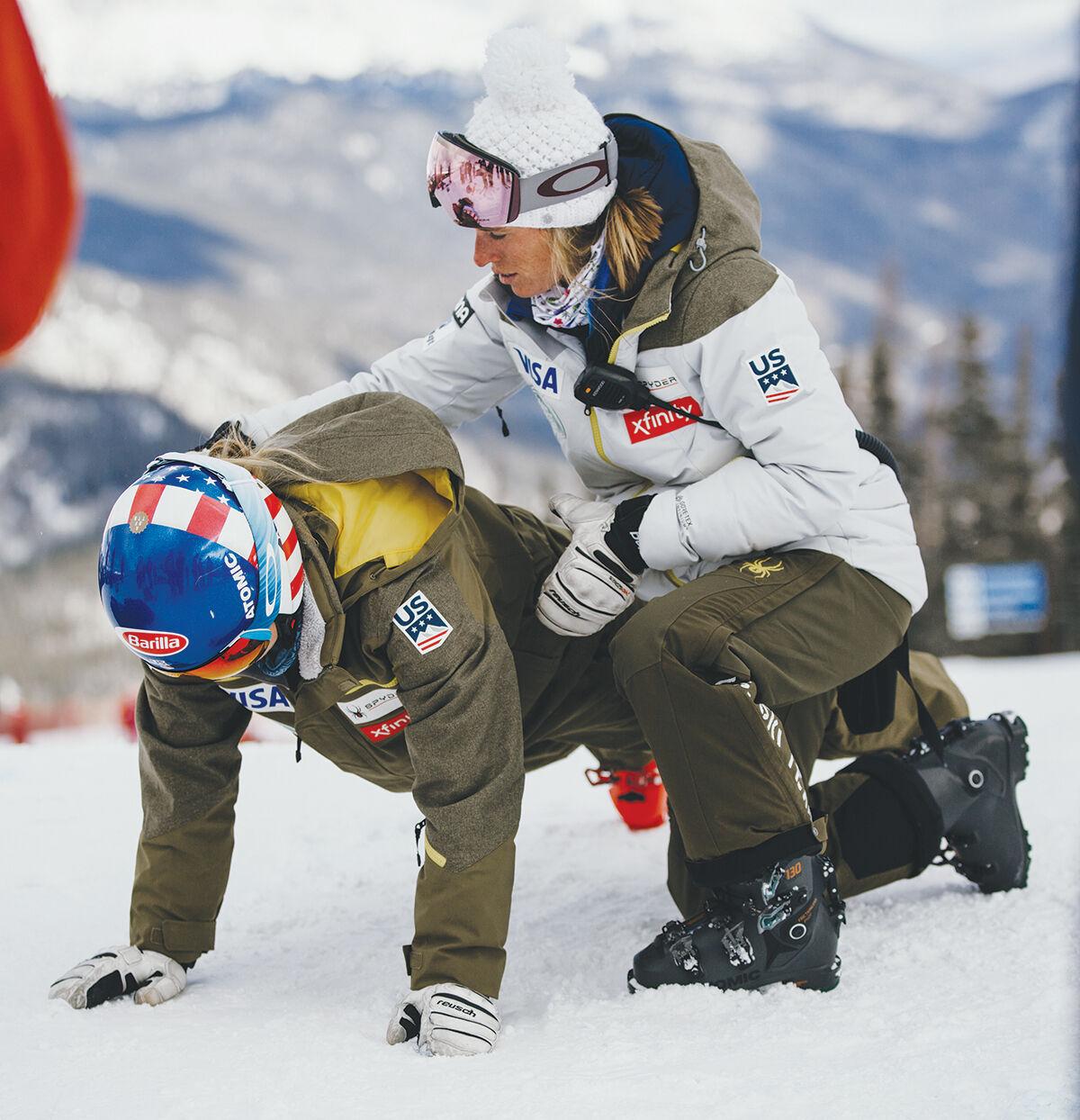 Regan Dewhirst works with Mikaela Shriffin in Copper, Colo., during a warmup session at a November training camp.

The two were performing a reactive core activation drill where Shriffin had to respond to unpredictable forces. 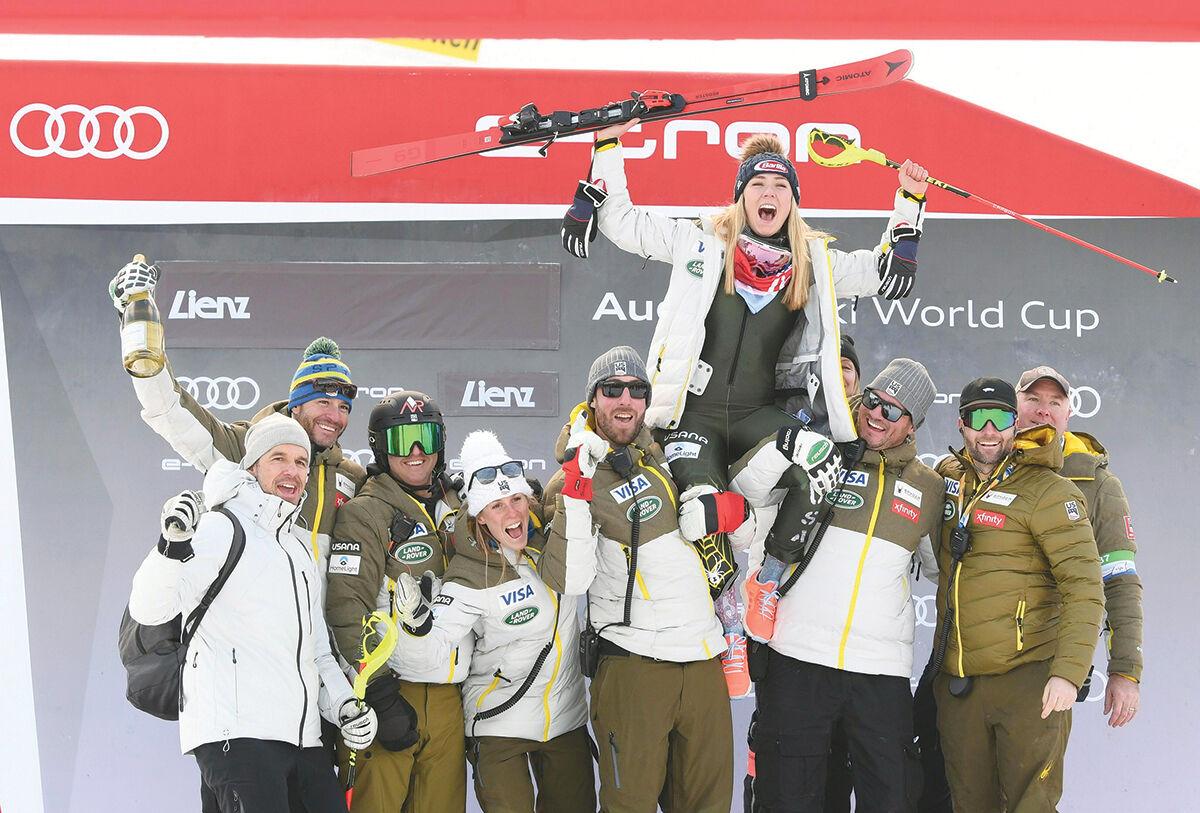 Regan Dewhirst works with Mikaela Shriffin in Copper, Colo., during a warmup session at a November training camp.

The two were performing a reactive core activation drill where Shriffin had to respond to unpredictable forces.

Regan Dewhirst was three years into a career in physical therapy when a childhood friend called her with a job opportunity.

It changed her life.

That childhood friend was Mikaela Shiffrin, the world’s best Alpine skier and star of the U.S. ski team with deep connections to Vermont and New England.

The job opportunity? Join Shiffrin’s team of coaches and staff who help the two-time Olympic gold medalist as she works through the nearly year-long grind of a season and career that takes her all over the globe.

“She asked if I’d be interested in joining and helping her out for a bit,” Dewhirst said. “You can’t really say no to that.”

A native of Hanover, N.H., — that’s where she first met Shiffrin when the pair were children — Dewhirst graduated from the University of Vermont with a bachelor’s degree in exercise science in 2013 and her doctorate in physical therapy in 2015.

Dewhirst was working at South Burlington-based VASTA Performance Training and Physical Therapy when she got the call in 2018 about joining the Shiffrin team. She immediately accepted and headed off to tour the world with one of the best skiers in the history of the sport.

Now, after two years helping Shiffrin, Dewhirst is coming home and plans to pick her career back up in Vermont. She lives in Waterbury.

“I loved the atmosphere, the team dynamic. It’s super hard to say goodbye,” Dewhirst said. “It’s awesome to be working around the athletes, the staff, all giving 110 percent, all working on a common goal. When it comes together there’s really nothing like it.”

Shiffrin is now one of the most well-known winter-sport athletes in the world, and at only 25 she’s already rewriting the record books.

Millions have watched Shiffrin win Olympic gold and others follow her exploits on the World Cup circuit, but Dewhirst was one of the first people to ever see her ski.

“We trained together a lot. We have a similar work ethic, but she was way better than I was, even at a young age,” Dewhirst said. She remembers going over to the Shiffrins to snowmobile, play on the trampoline or just have dinner.

Shiffrin had apparently kept tabs on her childhood friend as her own alpine career took off, and after Dewhirst completed college and her residency program, Shiffrin reached out.

Once she signed on, Dewhirst said it gave the old friends a chance to not only relive old memories, but to make new ones.

“It was kind of fun to bring that all back together, 15 years later,” she said.

A day in the life

As the physical therapist on Shiffrin’s team Dewhirst faced both routine and plenty of uncertainty on a day-to-day basis.

“It was a little bit of everything, you never really knew what you were going to get,” Dewhirst said.

Mike Day, Shiffrin’s coach and the leader of her team, said, “Regan is a highly skilled therapist, and she managed day-to-day maintenance of balance, posture and flexibility. Race day preparation included dynamic mobility and reactive work to ready Mikaela to perform at her highest level.”

She was also part of the critical response team if Shiffrin suffered an injury.

“In the rare and unfortunate times, when Mikaela was dealing with injury, Regan was steadfast in her pursuit to discover what would brink Mikaela back into balance,” Day said.

On a somewhat typical practice day, Dewhirst would work with Shiffrin in a morning gym session and warmup.

“A lot of mobility work, get her going, really,” Dewhirst said. If they’d all just gotten off a flight the day before, she’d work more on activities meant to jump-start Shiffrin’s mobility.

“Making sure she wasn’t tight, and was moving the way she wanted to,” Dewhirst explained. Other days, they’d focus on activities that got Shiffrin’s heart rate up in preparation for a more active day.

After that they typically headed out on the hill, where Dewhirst’s job was more “acute management.” Along with some logistics — staying in contact with ski patrol and having an emergency action plan — Dewhirst also focused on making sure “everything was firing right.”

“Then, stay out of the way,” as the day really got rolling, Dewhirst said. “Most days were pretty low key.”

Day’s end meant working with the strength coach to help keep an eye on Shiffrin as she wound down. Finally, the pair would go in for an actual physical therapy session, which focused mostly on recovery and making sure she’d be ready for the next day of training or an actual race.

“Getting her muscles ready, or joint mobility,” Dewhirst said, and they’d finish with exercises that helped to promote recovery.

“How can we get you moving as best we can, keep you as fit as possible while those little nagging injuries heal and you recover,” Dewhirst said.

She said her work with Shiffrin also allowed her to encounter some of the leading experts in her field.

“I co-treated with a PT in Norway, I worked with a strength coach in Sweden,” Dewhirst said. “Picking different teachers, picking their brains, learning different theories from around the world. It was all really cool.”

Life on the road

Outside of training and competition, Dewhirst and the rest of the team all played their part in making sure the entire unit ran smoothly, particularly as they followed the World Cup tour during the peak of the season.

“It could be anything from packing bags to getting reports, juggling anything you could possibly imagine to get a team of seven people from country to country very quickly,” Dewhirst said.

Those treks from one World Cup site to another actually provided some of Dewhirst’s most memorable moments with the team.

“Weather was always a factor. You might think you have a plan that works perfectly, then a massive snowstorm rolls through.”

Those she’s a slalom specialist, Shiffrin competes in all disciplines of alpine skiing, including giant slalom and downhill, which truly makes for a schedule that “is amazing and insane all at the same time.”

“The fact that she’s able to juggle that is super impressive,” Dewhirst said, but it means her team also works almost non-stop.

The World Cup season starts in early October and goes for six months. After a quick trip home in April the team usually heads to Colorado or California for spring snow, then follows the snow.

“A few weeks at Mount Hood in July,” Dewhirst said about this past summer. “The summer before we were in Argentina and Chile for about a month.”

“The last two years, it was about 280 days on the road,” Dewhirst said. Trips home can be tricky, even pre-COVID.

After 18 months of the work with the team, she decided to make a change.

“It was an amazing experience,” she said. “It’s a lot of time on the road, and this past summer I decided I was ready to be home. I wanted to spend time with my family, have holidays with my family, and be part of this community.”

Dewhirst wrapped up her last trip to Europe with the team in October and came home to quarantine and get back to work with VASTA.

While she’s excited to be back in Vermont, Dewhirst knows she will miss working with Shiffrin’s team.

“Hopefully at some point I’ll be able to cover trips again, my goal is to at least help with domestic camps if they need it,” she said. “I want to help Mikaela when she needs it.”

Now back in Vermont, Dewhirst has moved to Waterbury where she’ll be one of the staffers at VASTA’s new Waterbury location opening later this year.

“One thing I loved and appreciated being on the road with those guys was the immediate communication with other coaches, the medical team, the nutritionist, other PTs,” Dewhirst said. “You have the perfect bubble of everything you need to make people better.”

She wants to bring that same atmosphere and opportunity to local athletes in Vermont.

“We can provide that for athletes here too, coordinating that care,” Dewhirst said. “I feel really passionate about that.”