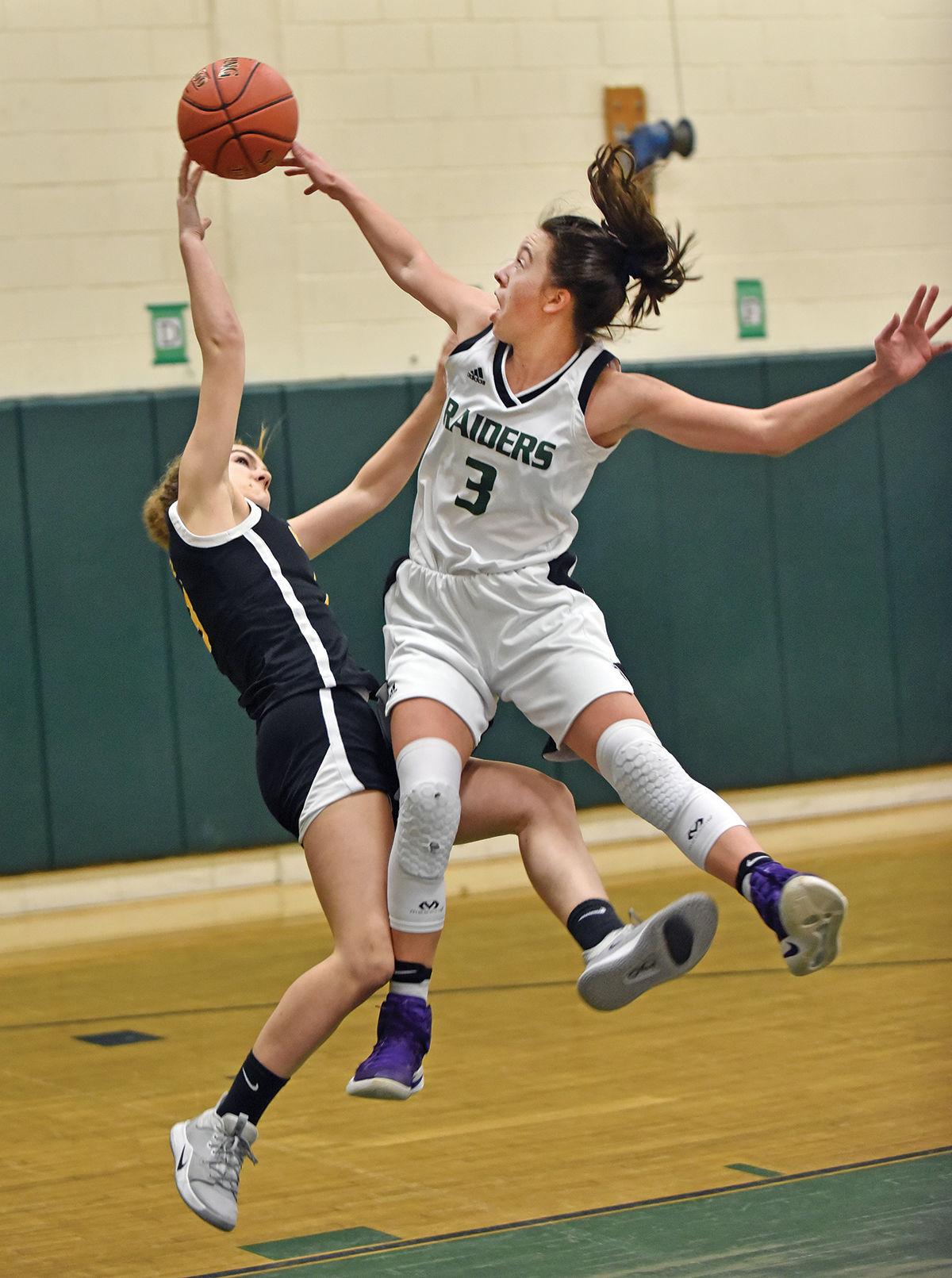 Stowe High’s Abby Lehman blocks a shot by a Winooski player. The Stowe team has a 3-2 record so far this season. 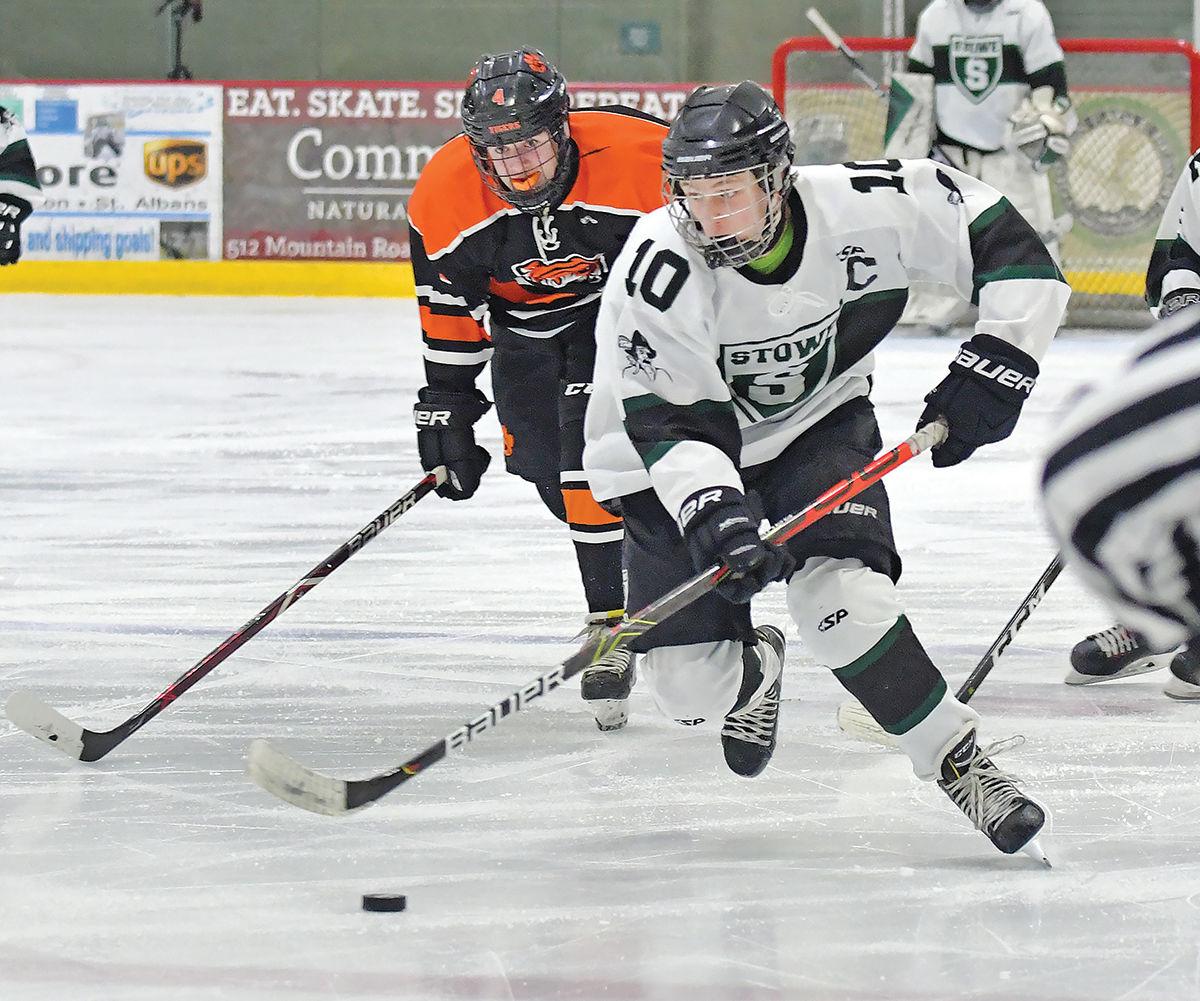 Atticus Eiden had the only goal for the Peoples Academy-Stowe boys hockey team in a 3-1 setback to Middlebury. 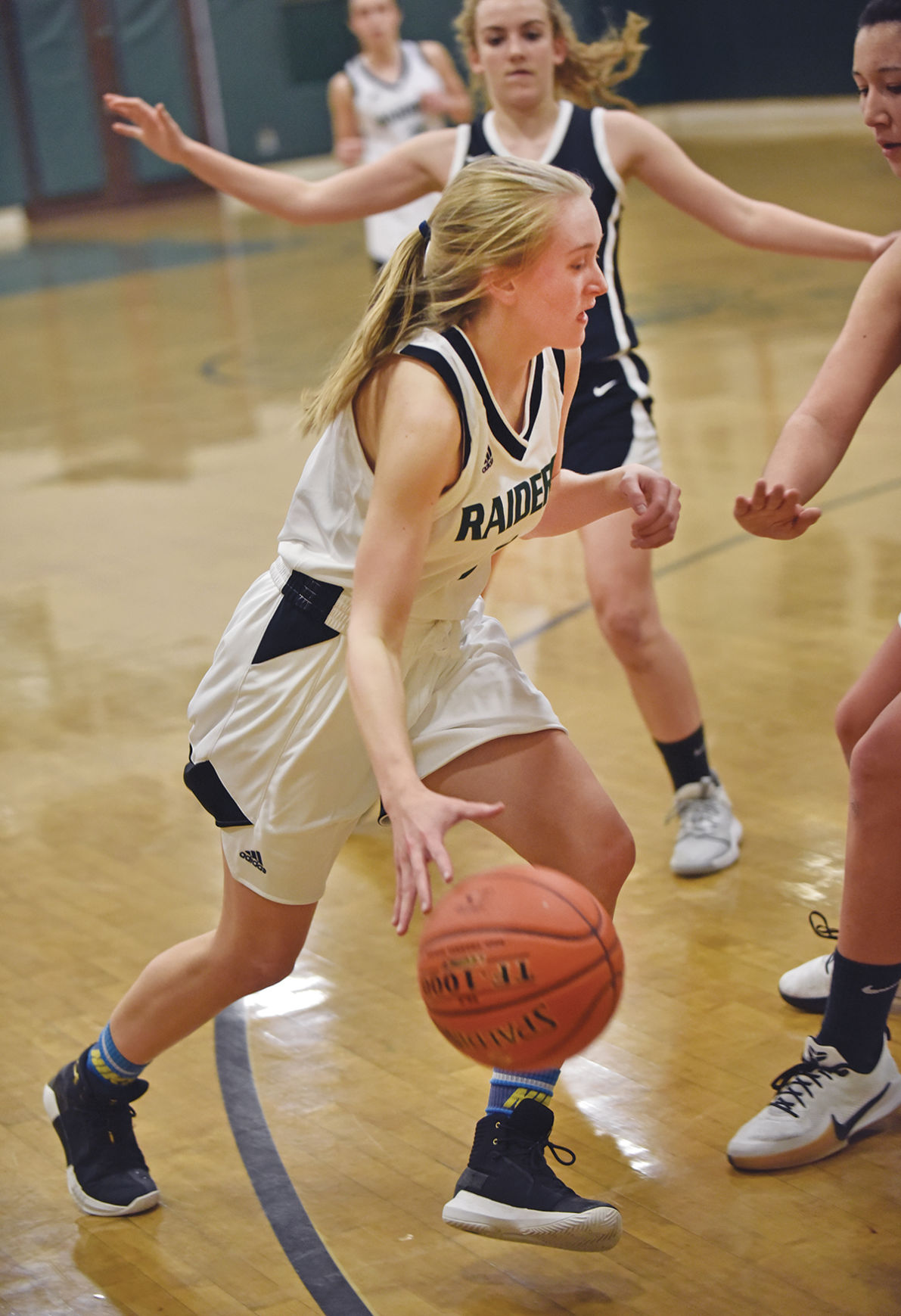 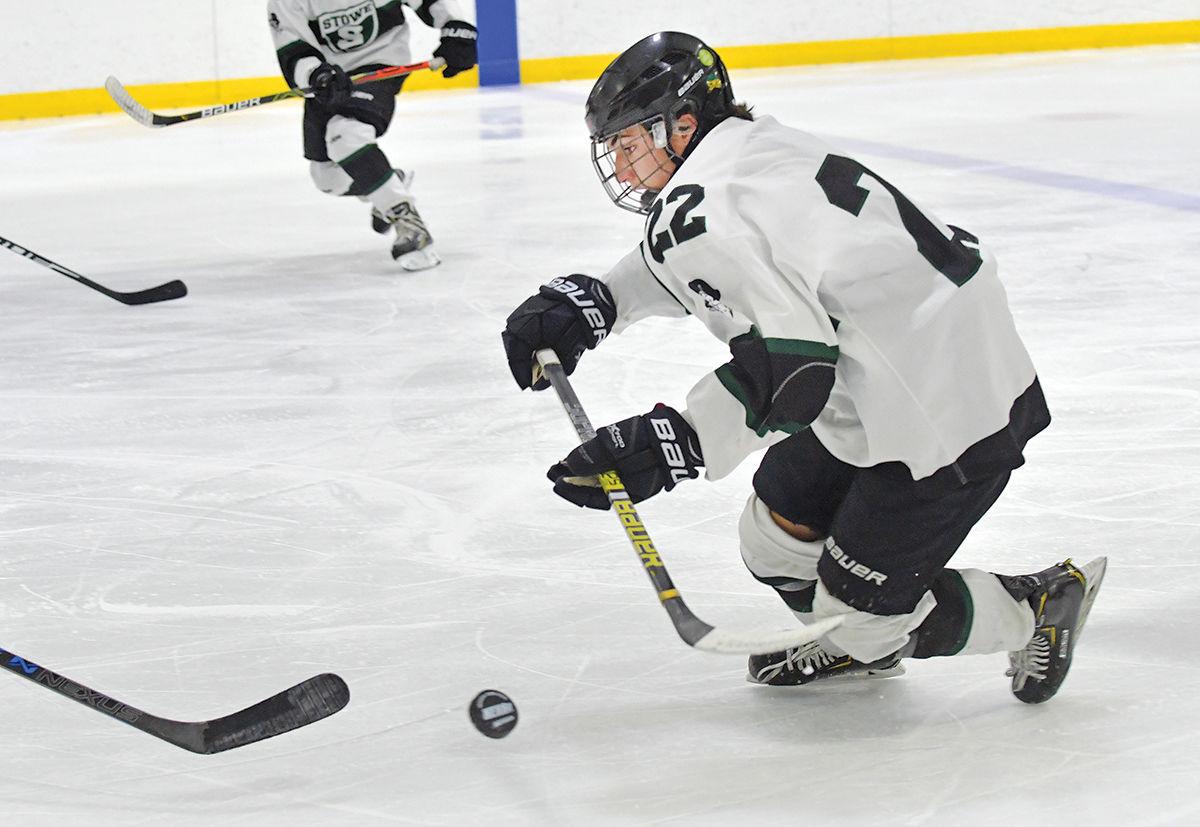 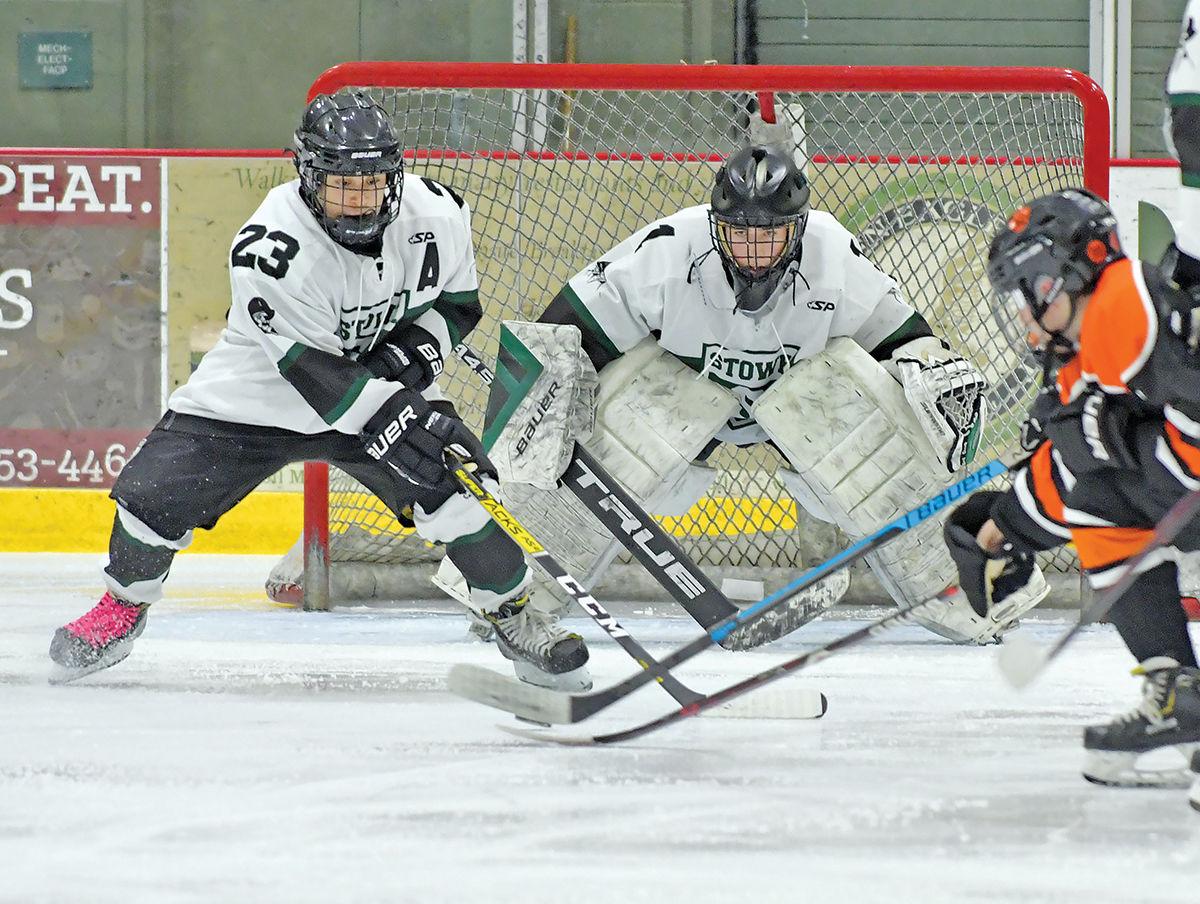 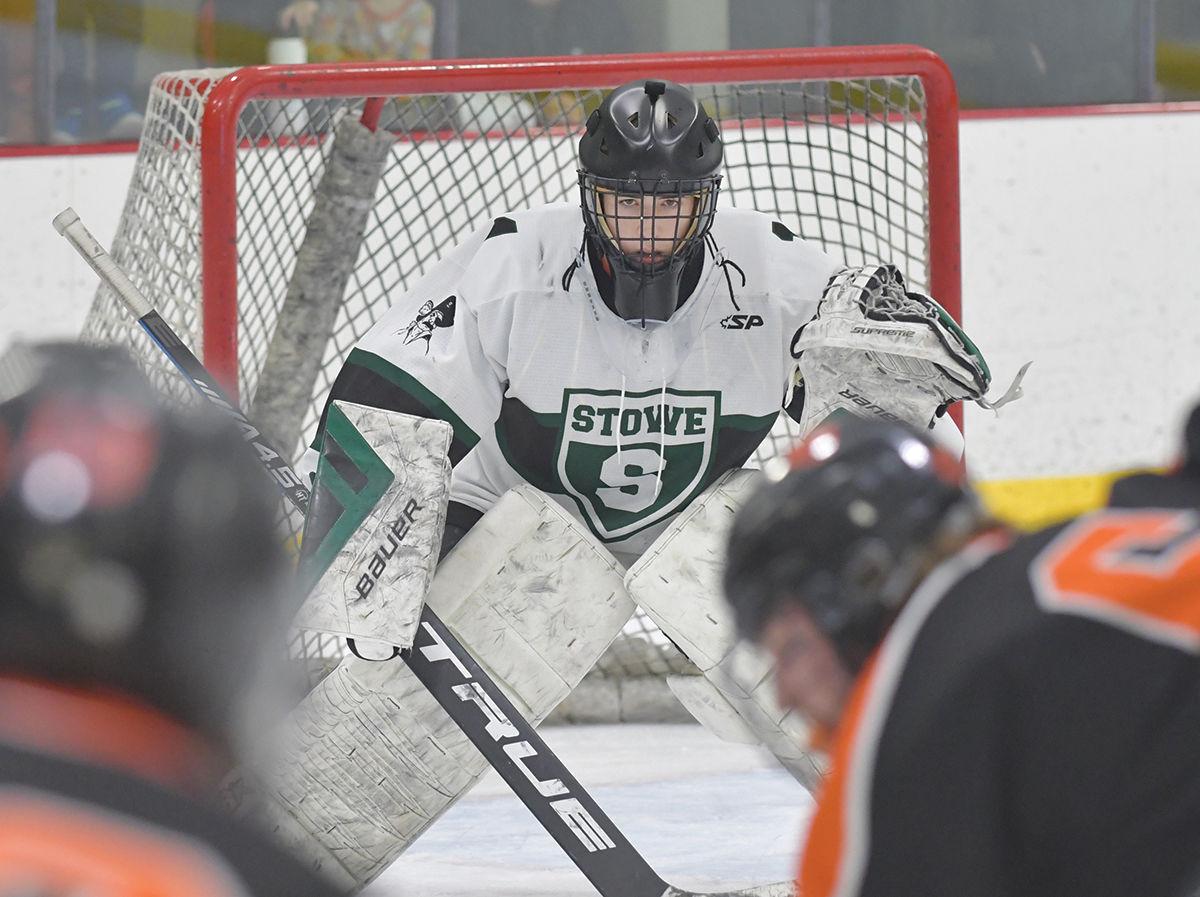 Stowe High’s Abby Lehman blocks a shot by a Winooski player. The Stowe team has a 3-2 record so far this season.

Atticus Eiden had the only goal for the Peoples Academy-Stowe boys hockey team in a 3-1 setback to Middlebury.

Carter Hill led Hazen with 14 points, Tyler Rivard had 11 and Isaiah Baker had 10.

Hazen beat Winooski in its next game and is now 7-1, in first place in Division 3 near the midpoint of the regular season.

Stowe, 4-3, is one of several squads with two or three losses that are chasing Hazen and battling for playoff position.

Fairfax came out on top in a tight matchup with Stowe.

Playing on their home court, Cam Meunier and Kolton Gillilan led Fairfax with 14 points apiece and Carl Bruso had 10.

Harwood led 24-4 at halftime, and kept up the pressure in the second half in a road win over Stowe.

“Our rotation defense was so quick,” said Harwood coach Tommy Young, as the team piled up double-digit steals and deflections for the game.

“This game was definitely one to learn from and will only make us stronger as we get into the heart of league play,” Stowe coach Marcy Falcone said.

Abby Lehmann was the top scorer for Stowe with five points and Rachel Cunningham had nine rebounds.

Harwood, now 6-0, is one of three unbeaten teams in Division 2 at the quarter-point of the season; the others are Springfield and Fair Haven.

Burlington-Colchester ran its record to 8-0 with a win at Peoples Academy-Stowe.

Six players scored for Harwood-Northfield. Reese Clayton and Louisa Thomsen had two goals and one assist apiece and Rachel Fernandez scored once and assisted on four other scores. Clara Griffin and Hailey Brickey each had a goal and an assist, Olivia Kaplan also scored and Kailie French, Halle Joslin and Molly Yacovoni has single assists.

Owen Lawton, Tucker Stevens and Hale Hescock scored for Middlebury, Ryan Madeau had an assist and Jeff Stearns turned back 25 shots in goal.

Atticus Eiden scored the goal for PA-Stowe on an assist by Alex Tilgner and Ethan Brown stopped 26 of the 28 shots he faced, as Middlebury’s final goal was an empty-netter — the Raiders pulled Brown for an extra skater in the final minutes, trying to tie the score.

Alex Tilgner and Atticus Eiden provided the firepower for host PA-Stowe. Each scored two goals and assisted on a goal by the other.

Henry Paumgarten piled up three assists, including one to Eiden, who scored an empty-netter after Colchester pulled goalie Hunter Baker for an extra skater, trying to tie the score.

Will Spencer and Jack Corman scored for Colchester and Alex Rublee had two assists.

Stowe High skiers John Lackey and Andrea Jackman were among hundreds of competitors in the annual three-stage Tour de Chittenden.

Lackey skied to 10th place on day one of the event with a time of 7:37 at a race in Colchester. Lackey was just seven seconds out of the top five.

Lackey was 22nd on day two of racing at the Ethan Allen Firing Range in Jericho and 23rd at the hill climb at Cochran’s Ski Area.

Skiing on the first two days of competition, Jackman was 47th out of nearly 200 skiers in Colchester and then came in 79th on day two in Jericho.