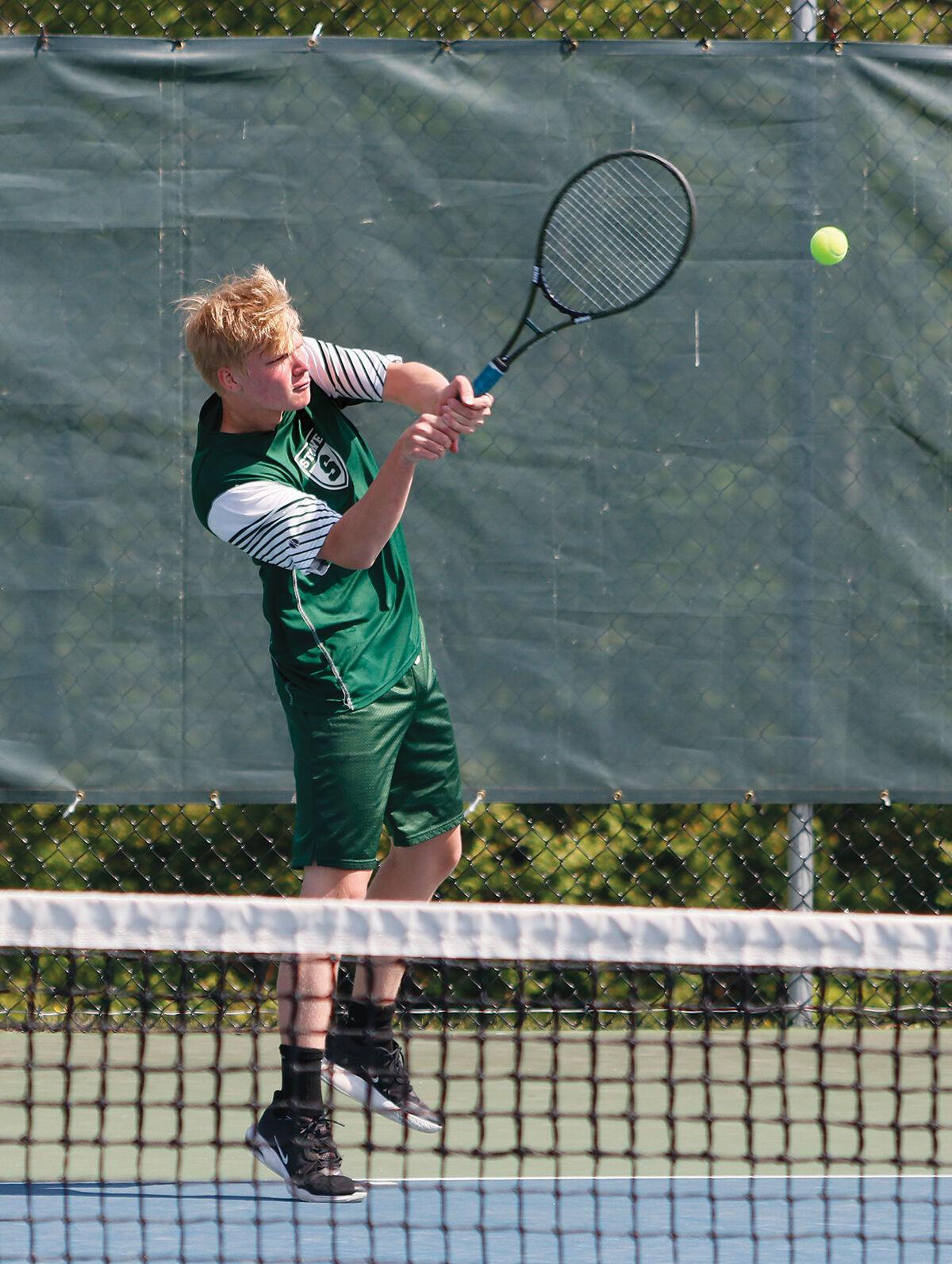 Stowe’s boys’ tennis and lacrosse teams started their quest to defend their 2019 titles Tuesday, with each winning their first-round matchups. Nick Daliere won a grueling three-set match in the team’s overall victory over Essex. 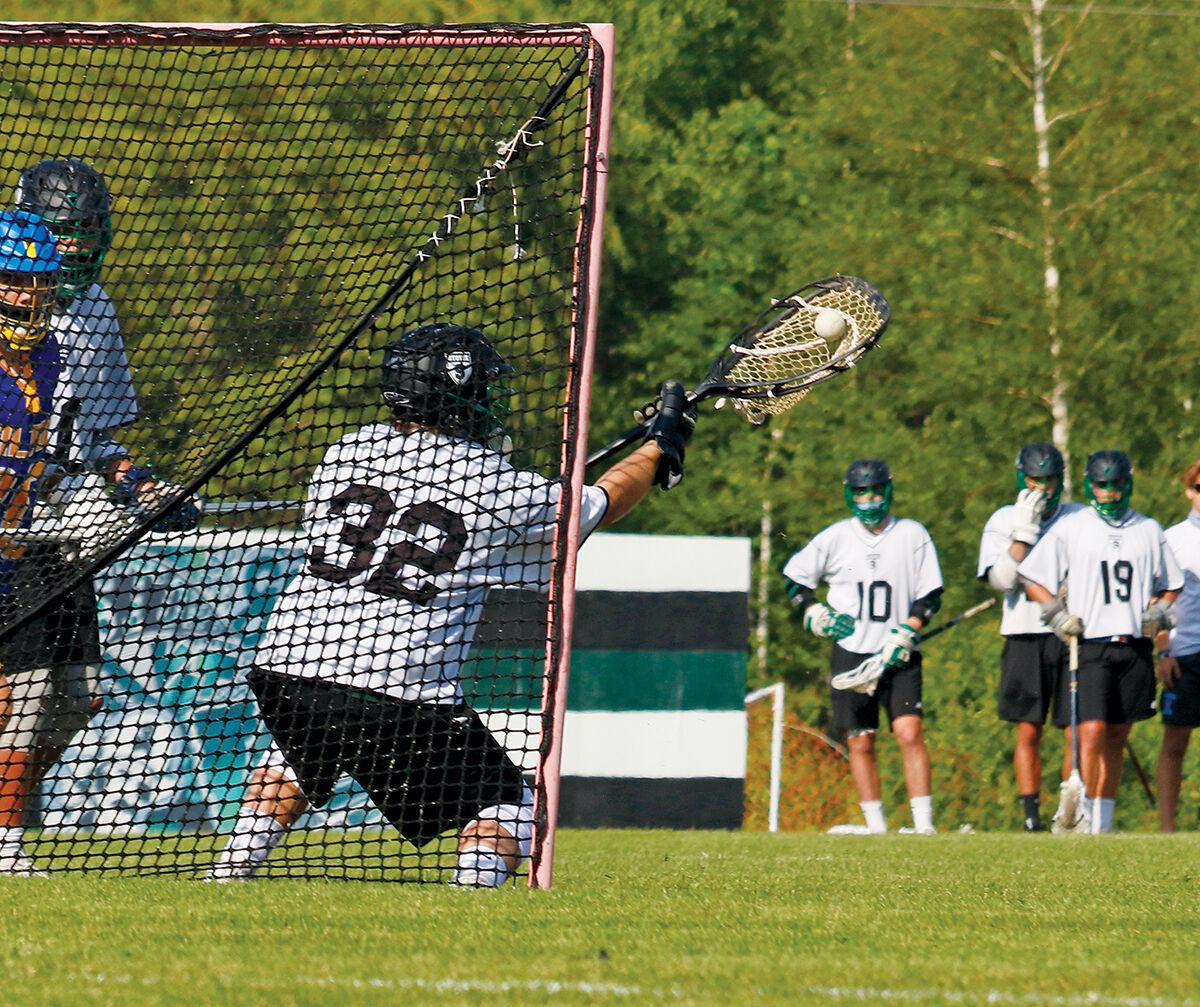 Stowe’s boys’ tennis and lacrosse teams started their quest to defend their 2019 titles Tuesday, with each winning their first-round matchups. Goalie Connor Dunne minds the net for the Raiders in their win over Milton.

Stowe’s boys’ tennis and lacrosse teams started their quest to defend their 2019 titles Tuesday, with each winning their first-round matchups. Nick Daliere won a grueling three-set match in the team’s overall victory over Essex.

Stowe’s boys’ tennis and lacrosse teams started their quest to defend their 2019 titles Tuesday, with each winning their first-round matchups. Goalie Connor Dunne minds the net for the Raiders in their win over Milton.

Stowe girls’ tennis coach Joanna Graves said, to the best of her knowledge, no Stowe tennis player has won an individual title in the sport. Saturday, May 29, her team nabbed its first, and added a doubles crown to match.

Skyler Graves, the second-ranked girl in the state entering the three-day individual tournament, bested the top-ranked player in straight sets, 6-4, 6-4. And the duo of Gabby Doehla and Kate Tilgner won the doubles match, the first for the school since 2009.

Both titles came against Burlington High School opponents. Senior Graves defeated senior Ruby Wool in a familiar matchup — according to coach, and mom, Joanna, the two have been playing each other since they were 7 years old. Skyler had set up a goal her freshman year of winning the indy title, and only had three years to ascend, after the 2020 season was canceled because of the pandemic.

“It has been the greatest thing for both players,” the coach said. “Skyler and Ruby have been fierce competitors who are generous and kind to each other and very fair on the court. It’s been a great friendship that they have developed over the years. This past weekend Skyler played a more flawless tennis match which is why she edged Ruby.”

Doehla and Tilgner are normally singles players when Stowe competes in the regular season and in the team tournament that starts this week. Graves said they figured out how to play together in the most high-stakes way possible.

“Kate and Gabby grew as a doubles team daily throughout this tournament,” Graves said. “They had to learn different strategies which they adapted to quickly. Once they gained their confidence they rolled!”

Graves was asked Tuesday how she compartmentalizes being Sky-ler’s mom and coach. “Truthfully, you never do. But honestly, I feel like I have a team filled with daughters. This is the greatest team.”

Next up is the team tournament, and Stowe gets home-court advantage the entire way, by virtue of its No. 1 ranking and its 9-0 record. The first match is Saturday at Stowe High, at 3 p.m.

“I think our crowd energy can get a team fired up. I truly believe our depth as a team and our strength as a group will carry us far into the state championships,” Graves said.

The second-ranked, and defending champion Raiders, opened up their playoffs with a 5-2 win over Essex Tuesday.

Essex’s top two singles players bested Stowe’s top two — Aiden Jensen def. Henry Paugarten 6-1, 3-6; and David Knickerbocker def. TJ Guffer 6-1, 7-6 (7-2) — but the Raiders secondary made up for those losses, punctuated by a grueling three-setter in the No. 3 spot.

Stowe hosts Woodstock Friday afternoon in the second round. The match starts at 3 p.m.

Remember that 2019 state boys’ lacrosse championship that PA/Stowe won? The rematch is this Friday, in the second round of the playoffs.

The Raiders won their opening round in their quest to defend their title at home against Milton. And next up is second-ranked Harwood, the Raiders’ foe in 2019. Harwood has the better record on paper, at 9-2, which includes a 15-1 drubbing of PA/Stowe on May 22, the day after the Stowe prom.

Coach Neil Handwerger said Tuesday’s game was a showcase of “non-stop grit and hustle” and a complete team effort.

“For the first time all season, I felt that the boys played four full quarters of great lacrosse,” Handwerger said. “I feel that we have hit our stride at the right time.”

He said senior attackmen Will Macintosh and Rowan Pinkham were back from injury, and just in time. Junior Luke Farley has peaked at the right moment, Handwerger said, and joins a powerful midfield composed of Reed Taylor, Jules Gershwin, Eames Eiden and Case Bradbury.

He said goalie Connor Dunne is one of the best in the state.

The road game in Harwood on Friday might be the marquee game, and the boys are hungry for revenge, which tastes a bit like ... well, let Handwerger explain.

“The theme for yesterday’s game was to EAT FRUIT, meaning the fruits of our labor, sacrifice, time spent together as a team, etc.,” he texted the morning after the Milton game. “Eat fruit, they did. And they will need to eat more on Friday.”

This opening round game between Lamoille County rivals came down to the wire, as Lamoille withstood a late rally from PA/Stowe, which had chipped away at a five-goal deficit until the Lancers won the last draw in the final minute and kept the ball away from the Raiders until the final whistle.

Stowe coach Amanda Nowacki said after the loss that it was very well-played by both teams, but Lamoille was able to capitalize on some missed Raider passes.

Nowacki said there are no seniors on this year’s squad, so there’s a chance this entire team could be back next spring, joined by a new crop of this year’s eighth-graders. She would like to keep in touch with the girls over the summer and hopes they keep in touch with each other, too. Nowacki is the assistant field hockey coach, so she’ll see some of the same girls next fall on that team.

“I am truly excited for next season and to see where this team can go,” she said. “The team came so far this season and I think next year with our experience we are going to be an unstoppable team.”

The Wolves (9-3-1 on the regular season) could enjoy home field advantage for at least the first three rounds before they might have to deal with No. 1 Thetford in the semifinals, who they haven’t seen yet this year.

First things first, though. Peoples played Mill River Wednesday after press time. The winner of that game will go on to face the winner of Wednesday’s matchup between No. 7 Green Mountain and No. 10 Woodstock. The second round game is Saturday at 4:30 p.m.

Peoples entered the first round of playdowns the lower seed against Vergennes and entered Vergennes just in time to take the field. A tardy bus trip meant the girls had to warm up in real time, according to coach Art Lilley.

“We got there very late and didn’t have time to take batting practice or a complete infield practice,” Lilley said. “But the girls got focused and played well.”

The Wolves had 16 hits in the game, including a seven-run seventh inning to tie a bow on things.

Felica Poirier led Vergennes in scoring, going 3-for-4 at the plate with 2 RBI and 2 runs.

Peoples travels to No. 2 Oxbow Saturday for round two. Game time is 3 p.m.