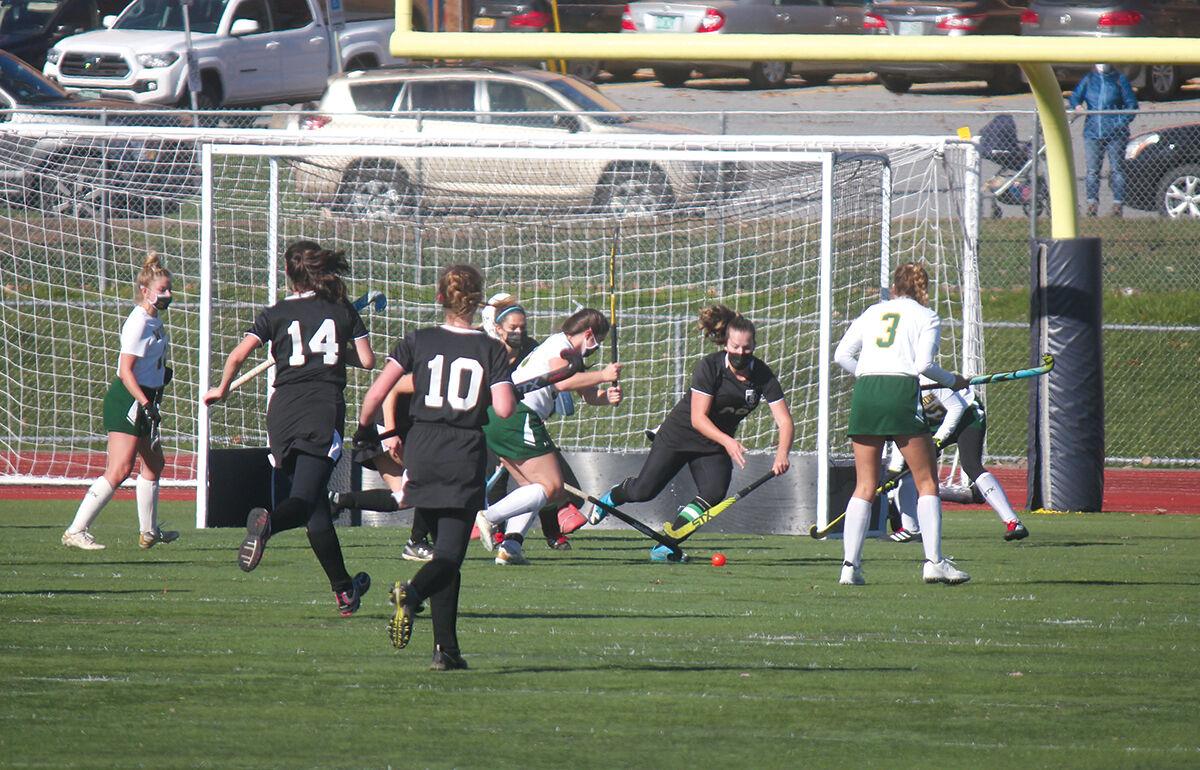 The Stowe field hockey team dropped a close one to Windsor in the Division 3 state championship game on Saturday. The Raiders, ranked No. 2 in the division, lost the state title game to No. 1 Windsor for the second year in a row, 2-1. The Stowe defense swarms a Windsor player about to take a shot. 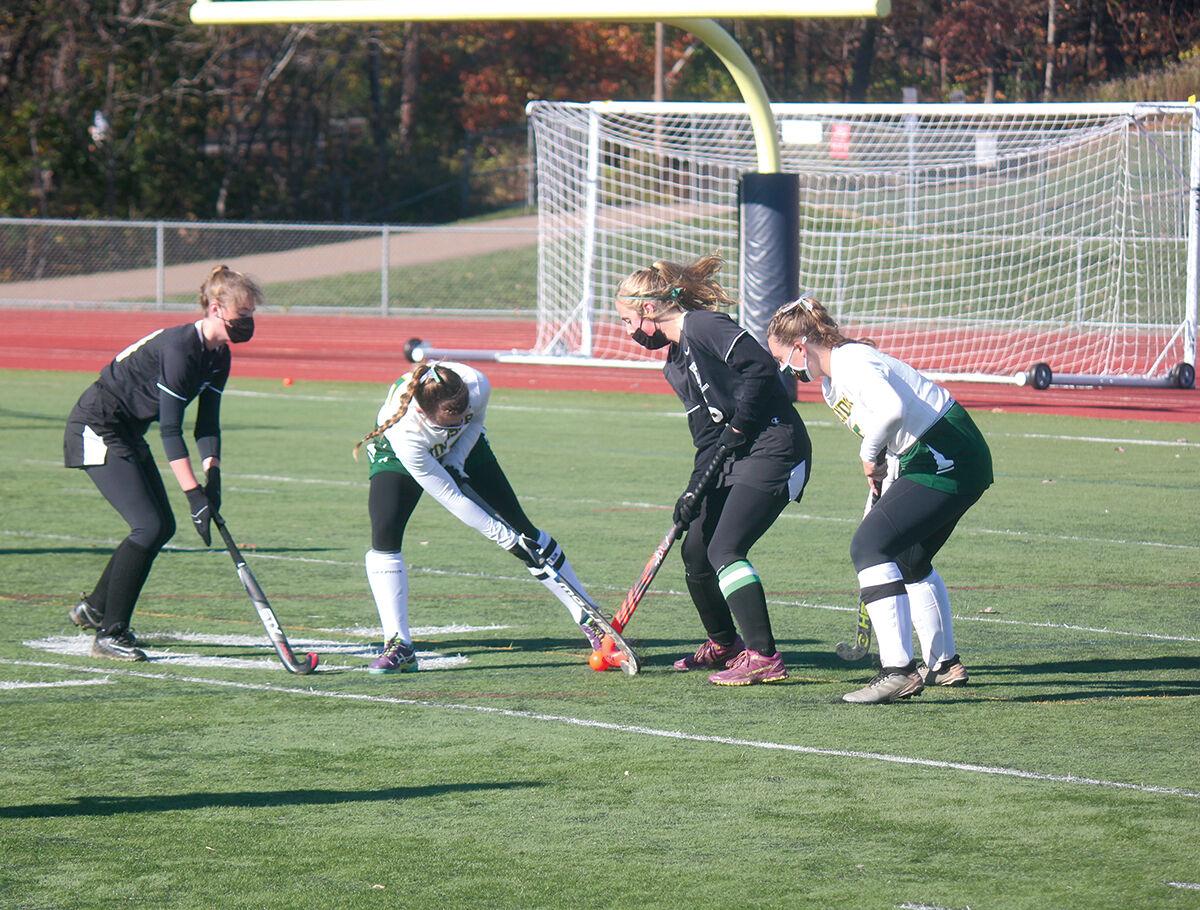 A pair of Raiders battle for possession against two Windsor players

The Stowe field hockey team dropped a close one to Windsor in the Division 3 state championship game on Saturday. The Raiders, ranked No. 2 in the division, lost the state title game to No. 1 Windsor for the second year in a row, 2-1. The Stowe defense swarms a Windsor player about to take a shot.

A pair of Raiders battle for possession against two Windsor players

The third time wasn’t the charm — and the fourth wasn’t either — as the Raiders came up short against Windsor, losing 2-1, in the Division 3 field hockey state championship game on Saturday, Oct. 31.

It was the second year in a row that Stowe was unable to get past the Yellow Jackets and lift the championship trophy. Stowe also lost the 2017 and 2018 D-3 title games, to Lyndon and St. Johnsbury, respectively.

There were even the same number of goals scored this year as last year, with Windsor slotting two past the Stowe defense and the Raiders only able to net a single goal in the second half to provide the final 2-1 margin.

“I think this is the best they’ve performed at states. I don’t think the score reflects at all what the game was,” Stowe head coach Justina Wentworth-Reichelt said about her team’s performance on Saturday. “It was a great game. We had as much of a chance of winning as the other team as far as level of play.”

Last year, Windsor beat Stowe 3-0 for the D-3 crown in a much more lopsided contest. The contest Saturday was much closer, with Stowe dominating play for much of the second half. But the 2-0 hole that Stowe found itself early in that second half proved to be too deep to climb out of, as the Raiders scored once but were unable to tally the game-tying goal over the final quarter and a half.

The first half of the game was mostly about defense as Stowe was unable to make any meaningful attacks into Windsor’s defensive circle and the Yellow Jackets were able to score their first half goal on a fast counterattack midway through the first quarter.

Players Rachel Ramos and Alex Forbes were the biggest attacking threats for Stowe down the flanks but they couldn’t get the ball into the dangerous central areas to threaten the opposition’s goal.

The second half started off badly again for Stowe as Windsor stormed down the field in the opening minutes of the third quarter and scored their second goal of the game. But the Raiders responded quickly, with an outstanding individual effort by Reagan Smith, who beat Windsor goalie Glenna Ricard for the goal two minutes later to halve Stowe’s deficit.

From that moment on, Stowe dominated possession of the ball and constantly threatened the Yellow Jacket goal with waves of players sweeping forward but just couldn’t put it past Ricard.

“We just didn’t finish today,” Wentworth-Reichelt said. Still, she credits her squad for shutting down what has been a high-powered Windsor attack all season. Windsor scored at least four goals in five of its six regular-season games and had a season high of nine goals in one game.

“On corners, defensively, just the way we were able to shut them down was really impressive,” she said.

“Even though we have a smaller number of girls we’re still able to keep up with the big teams,” senior Skyler Graves said.

Fellow senior Natalie Doehla said, “The group of players that we’ve had, we’ve always had a super strong team dynamic.”

Hannah Wood led the Windsor attack with a goal and an assist and Karen Kapuscinski had the other score. Ricard finished with three saves for Windsor; Stowe goalie Abbey Casavant made five saves.

Stowe was only able to field 16 players, six of them graduating seniors, but their coach was impressed with their effort against a team used to dominant victories.

“They are pretty used to winning 5-0, 6-0, 7-0 and that wasn’t the case today. I am actually surprised that we didn’t end up going into overtime,” Wentworth-Reichelt said. “It was just about everybody being on the same page and pulling in the same direction and I feel like the Raiders have nothing to be ashamed of.”

Stowe finished the season 8-2. Windsor wrapped up its second-straight championship season with a perfect 9-0 record.

Andrew Martin contributed to this story.