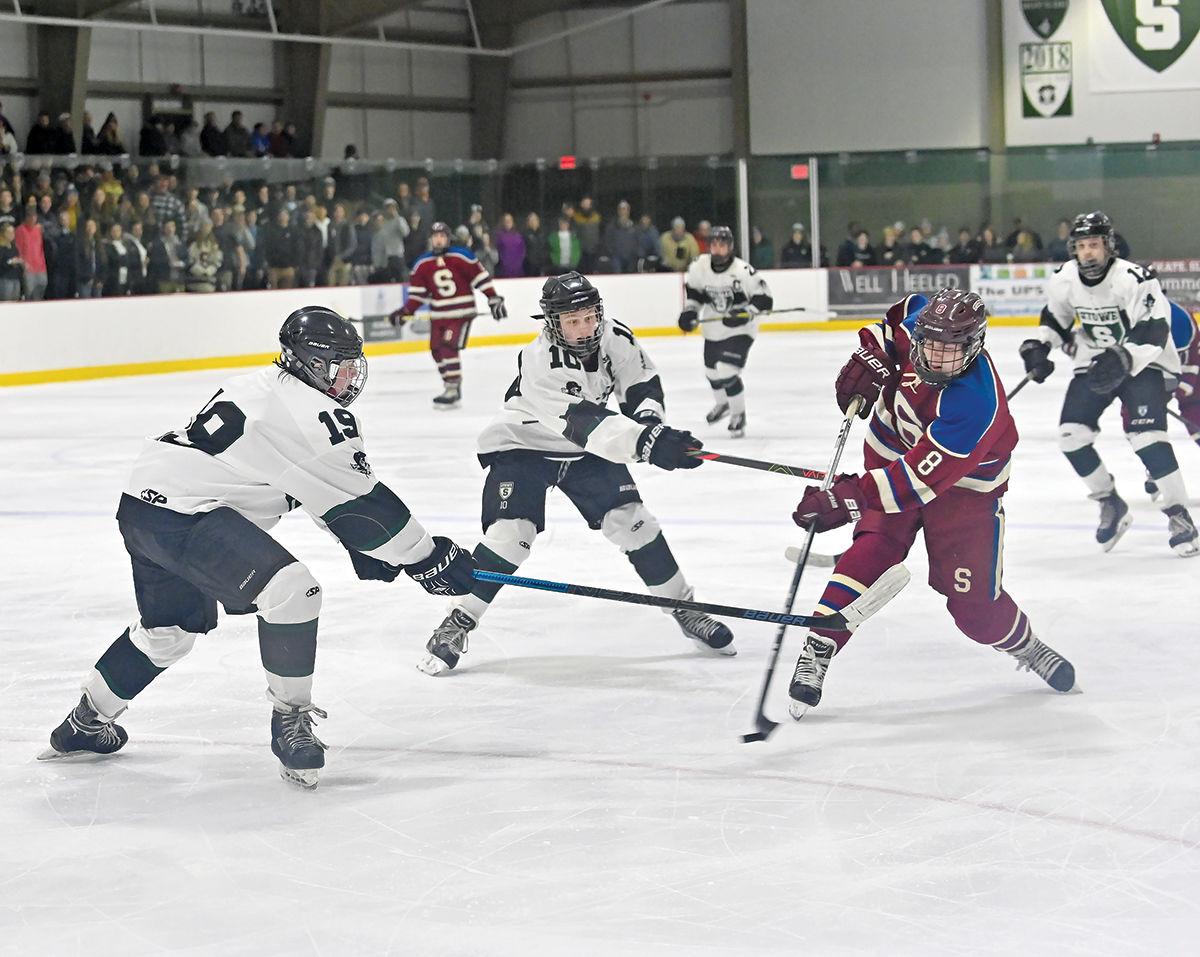 Eames and Atticus Eiden harass a Spaulding attacker in Stowe High’s win in the Division 1 quarterfinals. 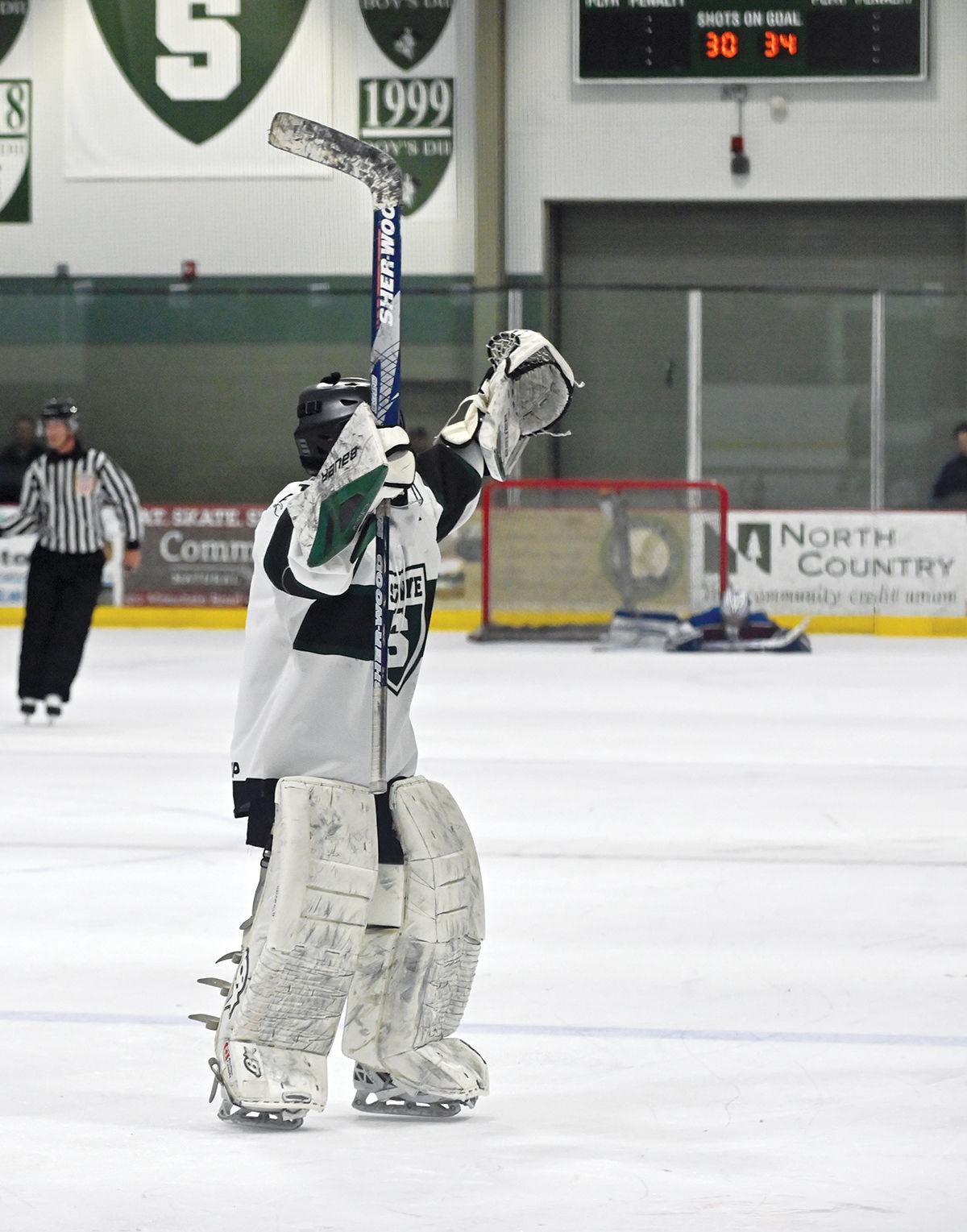 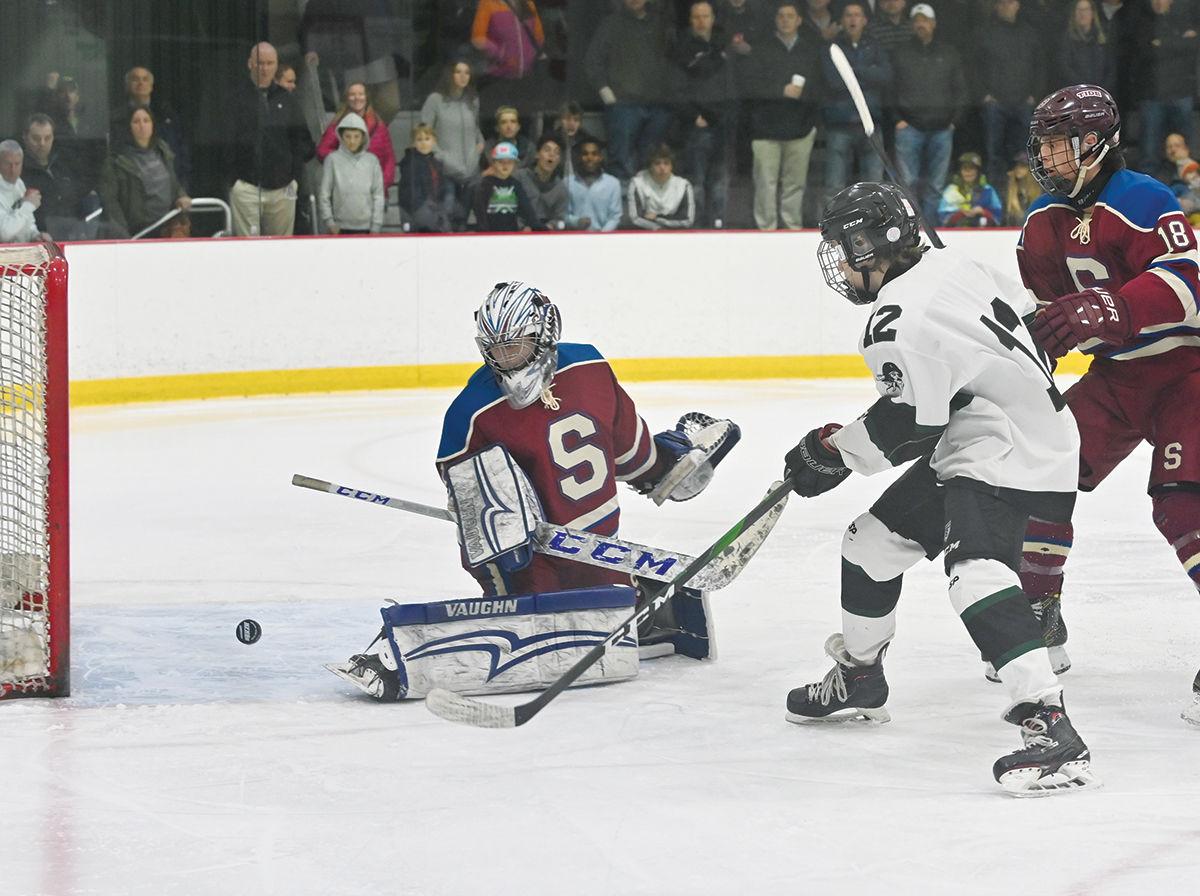 Henry Paumgarten scores one of his two goals against Spaulding. 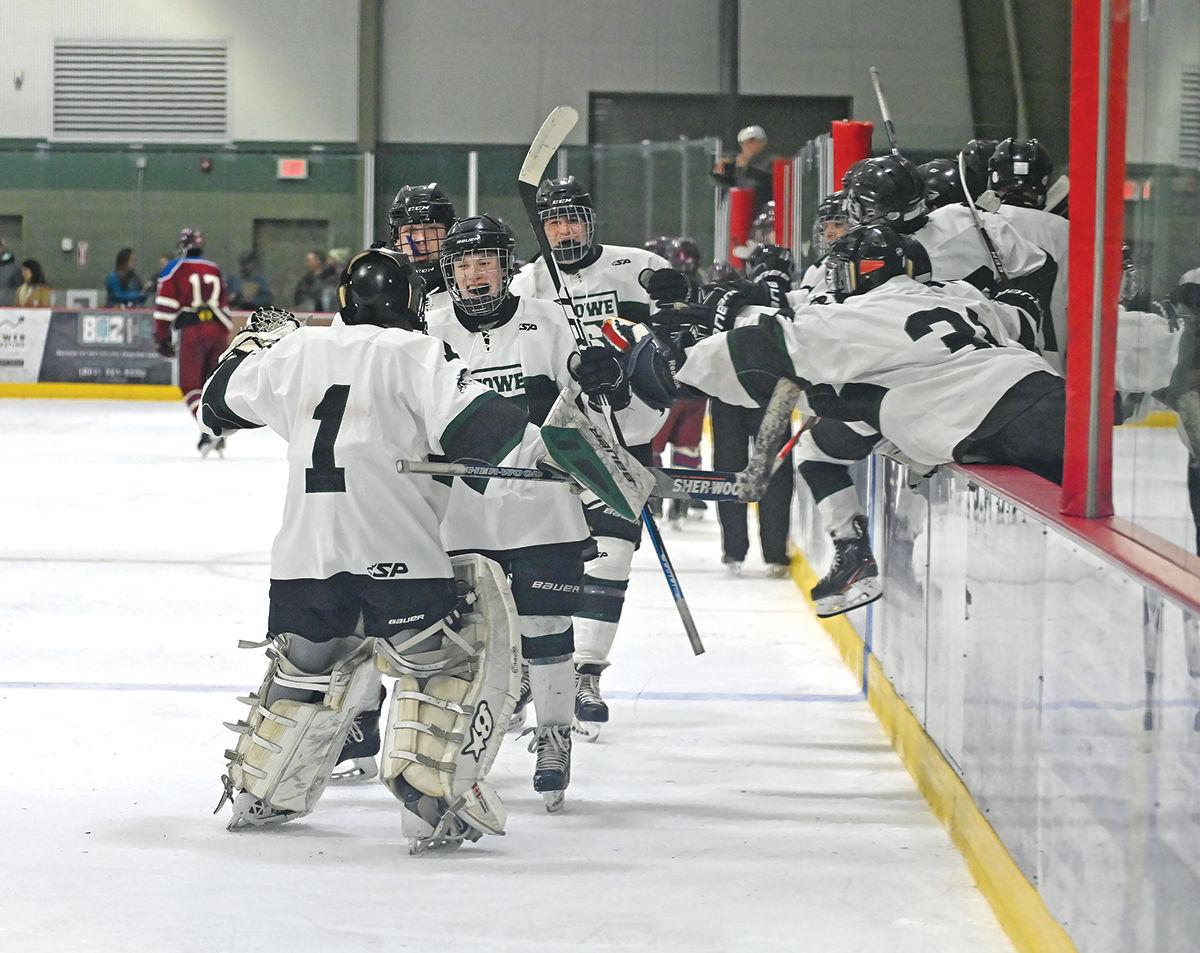 The Stowe High bench erupts after beating Spaulding in the quarterfinals. Stowe went on to defeat No. 1 Essex in the semifinal, and played No. 2 BFA St. Albans for the championship on Wednesday night, after the Stowe Reporter went to press. 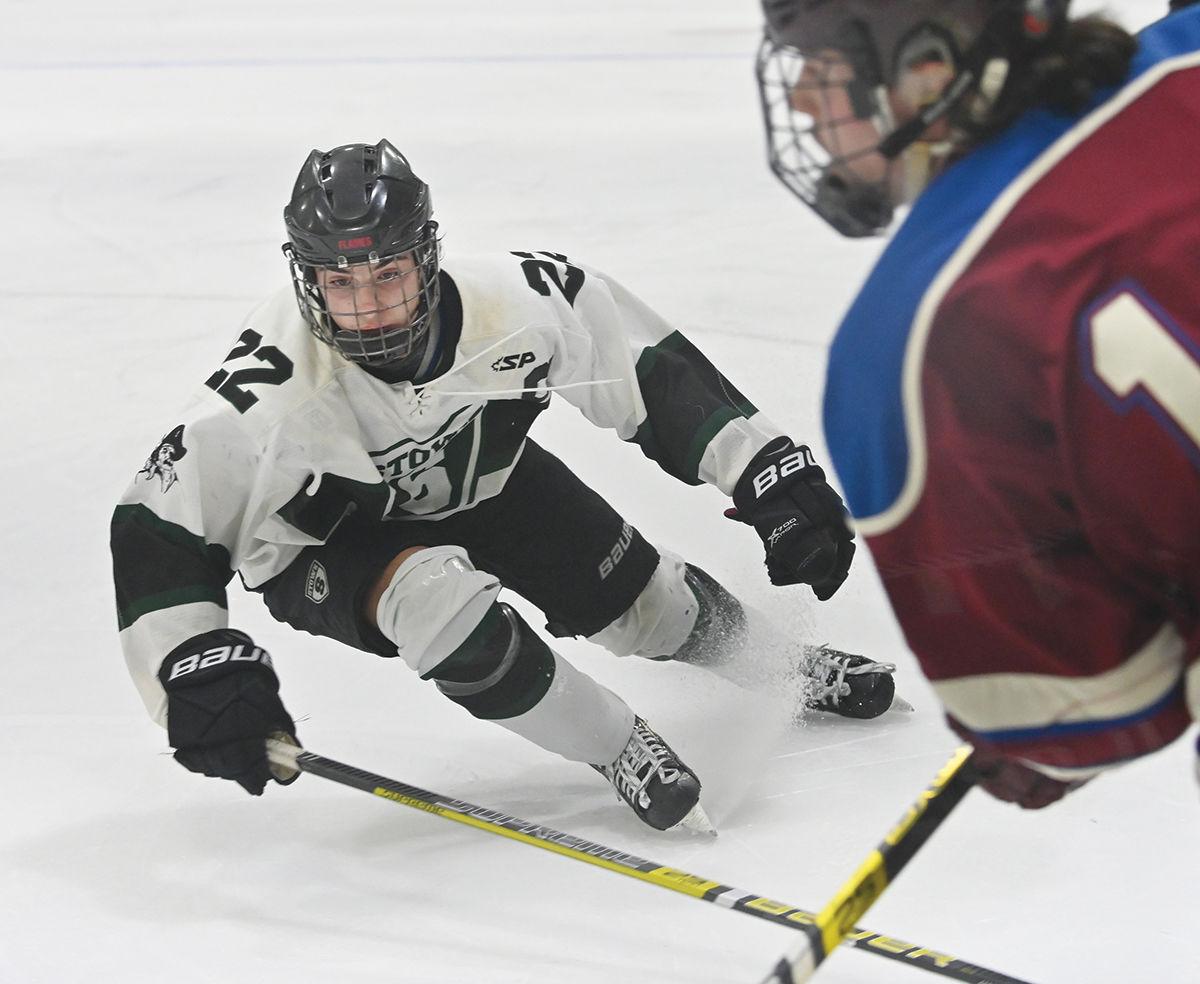 Eames and Atticus Eiden harass a Spaulding attacker in Stowe High’s win in the Division 1 quarterfinals.

Henry Paumgarten scores one of his two goals against Spaulding.

The Stowe High bench erupts after beating Spaulding in the quarterfinals. Stowe went on to defeat No. 1 Essex in the semifinal, and played No. 2 BFA St. Albans for the championship on Wednesday night, after the Stowe Reporter went to press.

Peoples Academy-Stowe used a stifling defense and an opportunistic offense to upset No. 1 Essex 2-1 in the Division 1 semifinals on Saturday.

That springboarded No. 4 PA-Stowe into the championship game against No. 2 BFA St. Albans at the University of Vermont’s Gutterson Fieldhouse Wednesday night, after the Stowe Reporter went to press.

Atticus Eiden and Alex Tilgner each scored an unassisted goal, all the offense Stowe would need.

Essex actually took an early lead when Ryan Clark scored off an assist by Justin Prim, but PA-Stowe quickly answered, as Eiden collected a loose puck and swooped in to beat Essex goalie Paul Gordon.

The two squads stayed tied 1-1 until Tilgner beat an Essex defender and Gordon for the game-winning score with eight minutes left to play.

A five-minute major penalty against Essex then tipped the scales in the Raiders’ favor, and PA-Stowe goalie Ethan Brown and the Raider defense kept Essex at bay, even after it pulled its goalie for an extra skater in the final two minutes.

Brown finished with 24 saves for PA-Stowe; Gordon had 18 saves for Essex.

PA-Stowe lost to Essex twice in the regular season, but the games were close and another tight game was no surprise. Essex was the defending state champ and finished the season 19-2-1.

Henry Paumgarten scored twice to lead PA-Stowe past Spaulding in the Division 1 quarterfinals.

Eames Eiden and Rowan Keller also scored for PA-Stowe, Atticus Eiden had two assists and Raiders goalie Ethan Brown made 29 saves. Keller’s goal came on a penalty shot with less than two minutes left to put PA-Stowe up one, and the Raiders scored again before the end of regulation to ice the game.

Christian Day had a goal and an assist for Spaulding and Jamison Mast also scores.

Bleda-Vilalta was second in a two-run giant slalom on day one of competition and third in slalom on day two. Overall, the Stowe boys finished third as a team and the girls were seventh.

The giant slalom was held March 2 at Killington; the slalom was the next day at Suicide Six.

Bleda-Vilalta came close to winning the giant slalom championship; his time of 1:31.70 was an eyelash behind Dylan Roussel (1:31.55) of Rutland.

Shea Lyden had the best finish of any Stowe girl at the championships: 12th in giant slalom.

Overall, the Stowe boys finished in third with 125 points. South Burlington won the boys team title with 95 points and St. Johnsbury was second with 99.

The Stowe girls were seventh overall with 217 points. Mount Mansfield won a tight three-team race for the girls team title with 88 points, Burr & Burton was second with 95 and Woodstock third with 98. The Harwood girls finished behind Stowe, in eighth with 250 points.

Here’s how Stowe skiers did individually across the two days of competition, plus a recap of the top three skiers in each event. Skiers are listed by finish, name, school and time. In a scoring quirk, girls scoring was determined on day two by averaging the two runs of each skier, rather than adding them together.