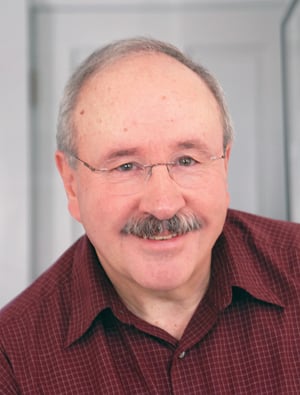 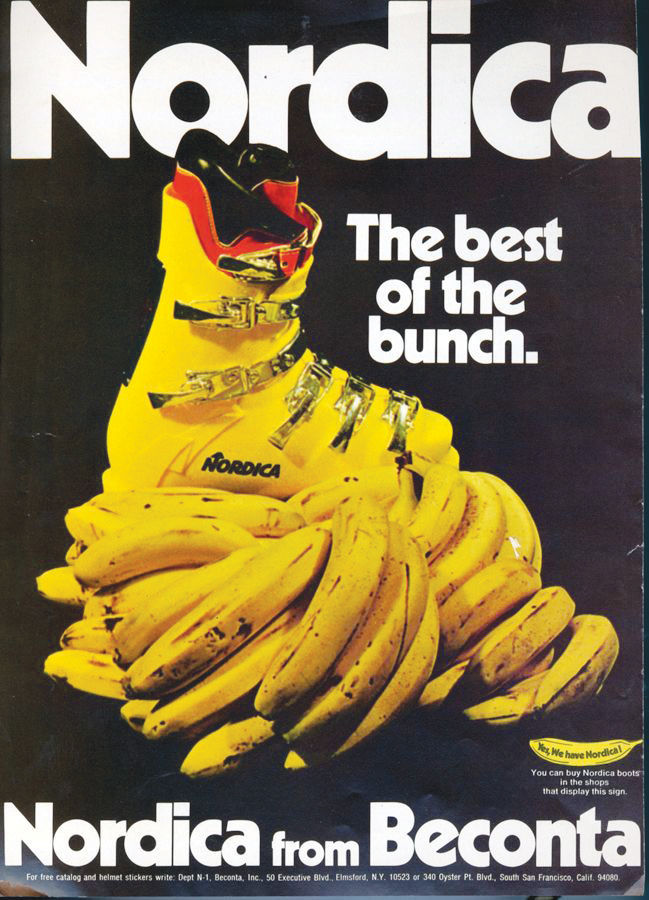 There were lots of correct answers to last week’s trivia question. The “yellow banana” ski boot was made by Nordica.

David Carter was the first to respond, followed by John Thurgood, Ivan Spector and Chuck Perkins. Chuck says they sold a few pairs of those “bananas” in the Alpine Shop.

I also heard from Bernadette Wyman and her daughter Lori. Bernadette’s late husband (Lori’s father), Bill Wyman, had a pair of the Nordica banana boots that he skied on for years, managing to repair the plastic as it got brittle with age.

The “yellow banana” was actually the Astral Slalom model, which was introduced in 1972. Its bright yellow color caught people’s eye and, of course, generated the nickname that people still recall.

Nordica smartly picked up on the nickname and used it in its advertising campaign. But there was more to the boot than just a pretty face. It was a performance boot that racers at all levels appreciated, but also became popular with recreational skiers. As a result, Nordica would sell over 400,000 Astral Slaloms, which set a record for a specific ski boot model that may still stand today.

The boot was designed by Sven Coomer and featured a leather removable liner with a high, two-piece plastic shell wrapped around it and five buckles for closure. In other words, it was the same design a majority of alpine ski boots still follow today. Although today we’ve been able to reduce the number of buckles.

I had a pair of the Astral Slaloms and loved them. They came up higher than any previous boots I owned and had more built-in forward lean. The combination made them difficult to walk in, but definitely helped my skiing. And as I recall, they produced less shin bang than other ski boots. (Original Lange owners remember the term “Lange Bang” that described this.)

Nordica was founded in 1939 by brothers Adriano and Oddone Vaccari in Montelluna, Italy. Initially they made high-quality leather footwear for general use. However, after World War II, in response to the increased popularity of skiing, they began making hand-stitched leather ski boots.

I tried to get this column into 2019 so I could point out Nordica is celebrating 80 years as a company, most of it making ski boots. As we know, the company has expanded to include skis and some soft goods as well.

When Nordica started making ski boots, it consulted with Italy’s star alpine racer Zeno Colo. Colo would help design performance into the ski boots. Colo won two golds and a silver in his Nordicas at the 1950 World Championships held at Aspen. Colo would also win gold in the downhill at the 1952 Oslo Olympics.

Colo’s success put Nordica on the world map as a ski boot for the serious skier.

Through the years, Nordica was quick to adopt ski boot technology innovations. In 1960, the Nordica people put out their first buckle boot. My first buckle ski boots were Nordicas that I bought in April 1966 at the Carroll Reed Ski Shop in North Conway, N.H. I paid $39.95 for them. Before you compliment me on my memory, I found the receipt while cleaning out my parents’ old house in New Hampshire this summer.

Of course, they were leather buckle boots, so I had to break them in. I went to Wildcat for a spring skiing day with buddies. At noon, when we went in for lunch, my feet were throbbing so much, I took my boots off. To get back into my boots I ended up taking my ski socks off and skiing in bare feet.

Nordica started producing plastic boots in 1966, which ultimately led to its success with the “banana” boot. By 1974, Nordica would capture 30 percent of the ski boot worldwide market.

Since then, the company has continued to produce successful performance-oriented ski boots. In the 1990s, racers on Nordica’s Grand Prix model would win more than eight Olympic gold medals. Bode Miller and other racers in the 2000s had success on Nordica Dobermanns.

Nordica began marketing a line of skis under its name in 2000. In effect, they were the former Kastle skis; Kastle had gone out of the ski business in 1999. Nordica has expanded the ski line to produce a spectrum of skis from racing to freeride.

Happy New Year to all Retro-Skiers! Hopefully the new year will bring us some snow.

Looking at ski resorts’ future, it’s best to stick with the experts

First, Dave McCoy, founder of Mammoth Mountain, died Saturday, Feb. 8, at age 104. He lived a long and productive life and I’ll have to dedicate a future column to his life.

This winter’s short of great, but there’s 60 inches of snow

Good ski conditions over the last several weeks have only improved in this latest stretch of winter. Some snow has fallen on most days and, heading into this past weekend, locals and visitors alike were blessed with what may have been the heaviest snowstorm of the season.

This past weekend, the U.S. Masters Cross Country Ski Championships were held in conjunction with the Craftsbury Marathon at the Craftsbury Outdoor Center.

This winter’s not exactly epic, but it’s holding its own

The lift-served portion of the ski season has now entered its fourth month, as February has arrived. The epic powder days of last winter remain a distant memory but that is not to say that this current winter has been without highlights.