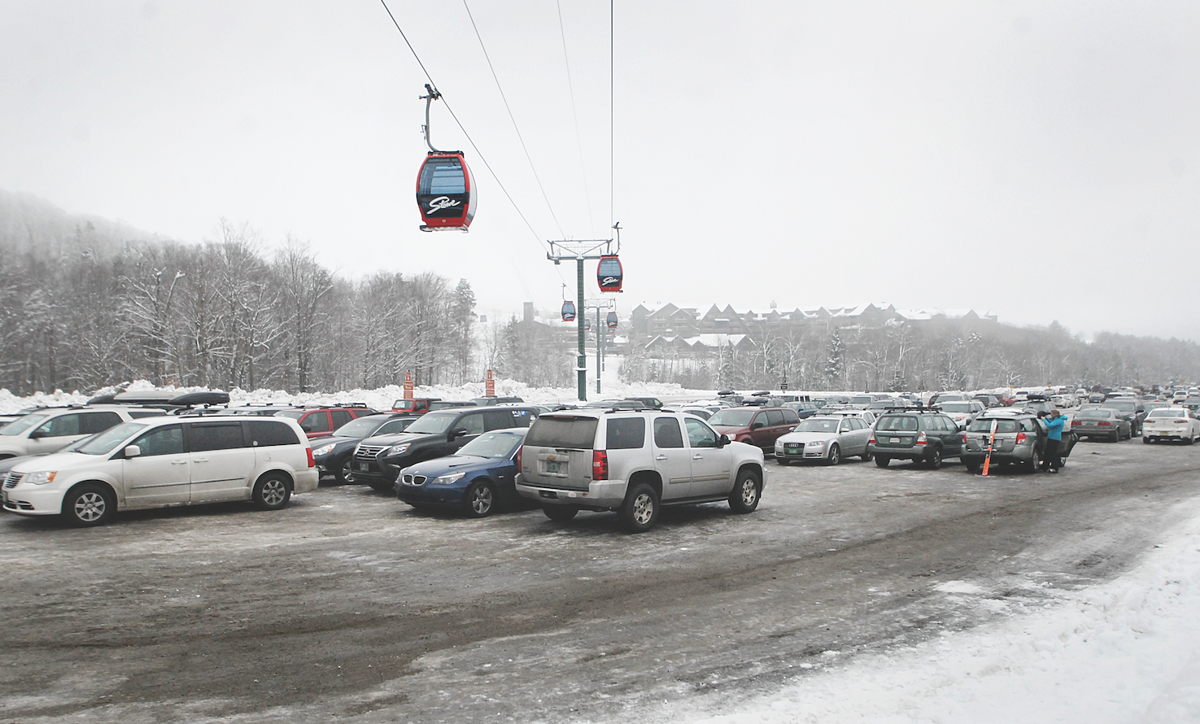 The Over Easy gondola connects the Mount Mansfield parking area at Stowe Mountain Resort to Spruce Peak, the buildings seen in the distance. Now that public parking has been eliminated at Spruce Peak, the gondola and shuttle buses will ferry people to the ski slopes, Spruce Peak Performing Arts Center, and the bars, restaurants and stores on the Spruce side. 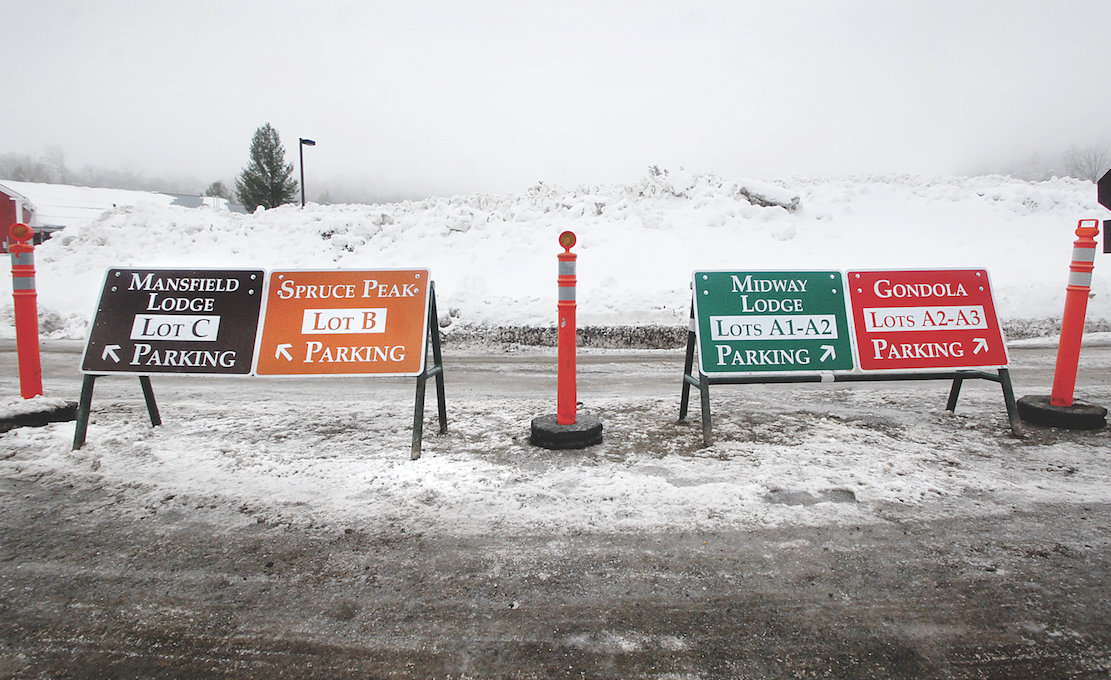 Signs near the Mansfield entrance point the way to parking areas.

The Over Easy gondola connects the Mount Mansfield parking area at Stowe Mountain Resort to Spruce Peak, the buildings seen in the distance. Now that public parking has been eliminated at Spruce Peak, the gondola and shuttle buses will ferry people to the ski slopes, Spruce Peak Performing Arts Center, and the bars, restaurants and stores on the Spruce side.

Signs near the Mansfield entrance point the way to parking areas.

Parking at Stowe Mountain Resort is suddenly a lot tighter — and it’s going to stay that way.

The resort has eliminated all public parking on the Spruce Peak side of the two-mountain resort.

Spruce is where the resort built its 312-room hotel and restaurants, the Spruce Peak Performing Arts Center, and its biggest base lodge, and where the Adventure Center and Stowe Mountain Club is getting a 108,000-square-foot expansion.

The 250 public parking spots at Spruce Peak have been eliminated.

“For all intents and purposes, there’s no public parking at Spruce Peak anymore,” Michael Colbourn, the resort’s vice president for marketing, sales and communications, said last week. “We want to let guests know upfront that there’s a potential for a parking problem.”

All cars will have to be parked on the Mount Mansfield side, across Route 100 from Spruce Peak. Anyone who wants to cross the road will have to take either a gondola ride or a shuttle.

At designated times, the resort will allow parents to drop off their children if they’re enrolled in resort programs.

But people who want to attend a show at Spruce Peak Performing Arts, ski the terrain on Spruce, or enjoy a little après-ski at Stowe Mountain Lodge will be expected to park on the Mansfield side.

The adventure center building will have a 150-space underground parking garage, but the only people who can use it will be guests at Stowe Mountain Lodge, Spruce Peak condo owners, and members of the exclusive Stowe Mountain Club, where memberships start at $15,000, with annual dues starting at $4,000 a year.

Colbourn said that, on busy ski days, 2,200 cars park at the resort. There are about 1,600 parking spots at the base of Mansfield, he said.

The resort says skiers come in waves, rather than all at once, and it hopes the Mansfield parking will be sufficient.

The Spruce Peak Performing Arts Center is a nonprofit arts organization; it owns its building within the Spruce Peak complex, but doesn’t have any say over roads or parking there.

Lance Olson, the art center’s executive director, said his organization will keep people up to date on any parking and access developments.

He said theater-goers in cities are already used to finding places to park, and not many of them get to enjoy a gondola ride to the show.

“This is something we’ve brought on ourselves, because we want to have a car and bring it everywhere,” Olson said.

Colbourn said it’s not uncommon to have a ski mountain without parking right at the base, especially out West, but Stowe Mountain Resort is working to make the tightened parking situation easier on guests who drive to the resort, and easier for people to ditch their cars and still get to the mountain. He referred to the Spruce Peak expansions as part of the evolution of Stowe Mountain Resort.

The resort has reconfigured the Mansfield parking areas and updated its website to show all the new parking lot sections (the website notes, “Parking is just the start of a great day at Stowe.”).

“We want to give the guest a clue book, pre-arrival,” Colbourn said.

The resort has also added five chairs to the Easy Over gondola, the main means of travel between Mansfield and Spruce Peak, increasing capacity by 30 percent per hour. And it is now running five shuttles counterclockwise throughout the resort all day.

The Stowe Planning Commission has been worrying about the resort parking situation.

Commission member Mila Lonetto said at the group’s meeting Dec. 1 that the town should make it easier to use public transportation or carpool, but it will be a tough sell for tourists and locals to give up their cars.

“We want that number to go up,” Wise said.

The resort has also developed a smartphone app for the transit agency that shows exactly where each of the Mountain Road shuttles is located at any time. The app is in beta test mode right now, but should be ready to launch officially soon.

Wise said the app will be a game-changer, since waiting for a bus in the cold can get annoying — and so can missing an extra run down the slopes, or maybe having a beer.

“Waiting one minute in the winter is like waiting 20 in the summer,” Wise said.

Winter bus service up and down Mountain Road could get better and faster, according to draft plans from Green Mountain Transit.