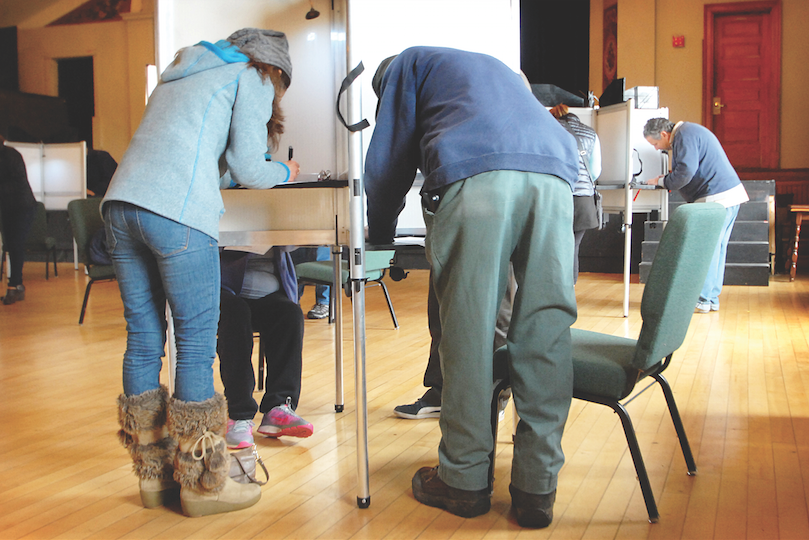 In a shocker, Scott Milne nearly upset Vermont Gov. Peter Shumlin in Tuesday’s election, and because neither of them got 50 percent of the vote, the Legislature must pick the next governor.

Election handicappers figured Shumlin had an easy road to his third two-year term, as Milne, the Republican nominee, was very late in entering the campaign, had little money, didn’t get much help from the GOP, and, as a first-time campaigner, made some missteps.

However, Milne’s criticism of Shumlin got surprising traction, as he blasted the Democratic governor’s “experiment” on single-payer health care that has run into major problems.

The vote was so close that both candidates went to bed Tuesday night not knowing who had won. Results continued to trickle in from towns that hand-count ballots, rather than use counting machines, and with all but two precincts reporting Wednesday morning, Shumlin led by fewer than 2,500 votes, but Milne said he thought the governor would get more votes in the remaining precincts than he would.

Libertarian candidate Dan Feliciano got more than 8,000 votes in the election; had those votes gone to Milne, he would be governor-elect today.

Locally, Milne won in Duxbury, Stowe and Morristown, while the governor carried Waterbury.

By law, if no candidate receives 50 percent of the vote in a general election, the Legislature chooses the winner. Shumlin is certain to get the nod, as Democrats hold a huge majority in both the House and Senate, and since 1853 the Legislature has always chosen the candidate who received a plurality.

• State senator, Lamoille County: Richard A. Westman of Cambridge, who won both the Republican and Democratic nominations in the August primary election, was unopposed Tuesday.

• House incumbents elected with opposition: Heidi Scheuermann, a Republican from Stowe, and Bernard Juskiewicz of Cambridge, who won both the Republican and Democratic primaries in August.

• U.S. House of Representatives, one seat: Incumbent Democrat Peter Welch of Norwich cruised past Republican Mark Donka by more than a 2:1 ratio.

• Auditor of accounts: The incumbent, Democratic/Progressive nominee Doug Hoffer of Burlington, was unopposed.

• State’s attorney, Paul Finnerty of Huntington, nominated by both the Democratic and Republican parties; he beat Democrat Christopher Moll in the primary. Finnerty will succeed Joel Page, a Democrat who has been the Lamoille County state’s attorney for 32 years. Page was elected Tuesday to be one of the county’s two assistant judges.

Typical of a mid-term presidential election year, voter turnout was lower than in a presidential year, unless there was something juicy on the ballot.

In Hyde Park, 62 percent of the 2,027 registered voters came out, drawn by a controversial $18.3 million bond proposal to build a new school. Town Clerk Kim Moulton said it absolutely accounted for the turnout: 1,256 people casting ballots.

In Morristown, with four people running for two House seats, voter turnout was 57 percent, based on a voter checklist of 3,403.

And in Stowe, where the local House and Senate candidates were unopposed, voter turnout was about 38 percent.

Justices of the peace

On the flip side of the Stowe ballot, 17 civic-minded Stoweites were vying for a dozen justice of the peace positions, that venerable catch-all of Vermont elected offices.

Justices of the peace do everything from count ballots and determine tax appeals to administer oaths and make marriages official.