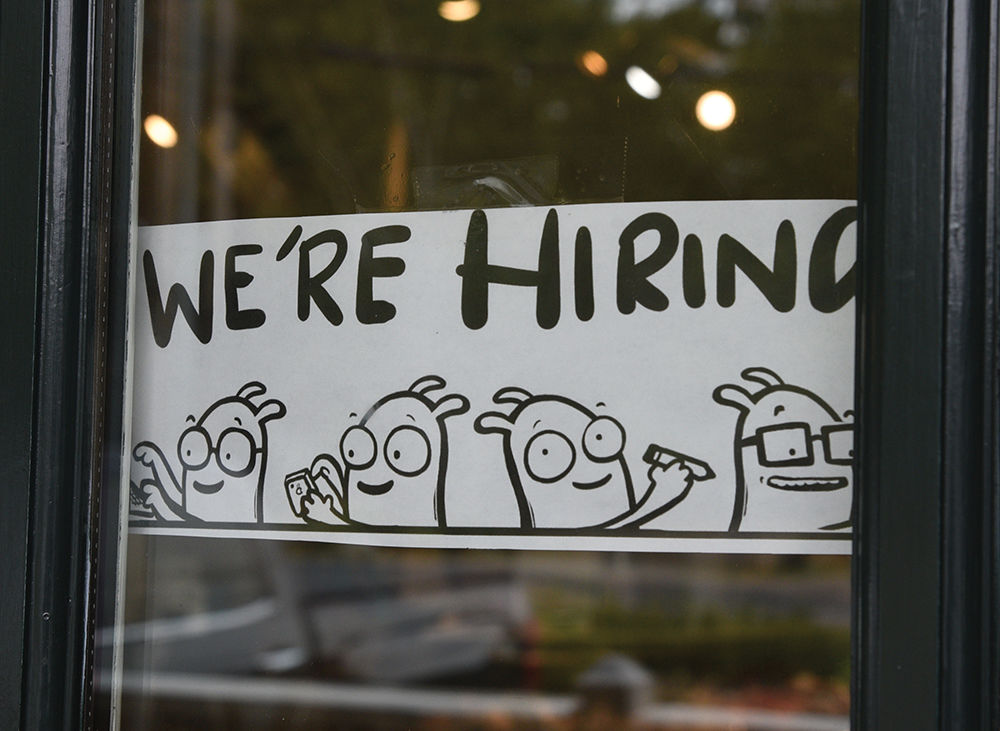 Harvest Market has cut its former seven-days-a-week schedule down to Wednesdays through Sundays for the fall season, and it’s not alone. Below, crowds at McCarthy’s Restaurant still need to be waited on, despite a labor shortage in town, so owner Diane McCarthy finds herself filling coffee cups and directing people to their seats, too. 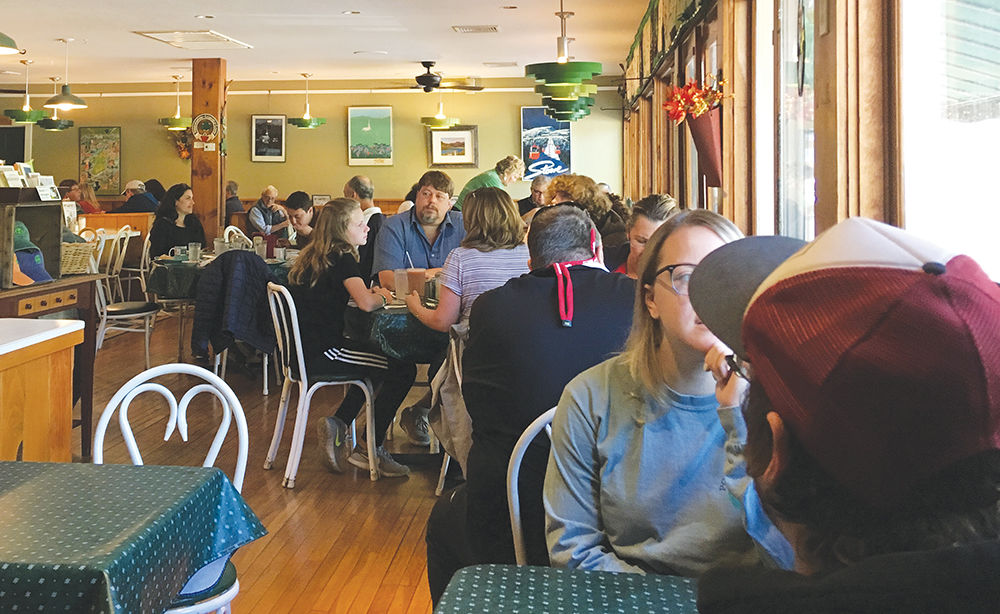 Harvest Market has cut its former seven-days-a-week schedule down to Wednesdays through Sundays for the fall season, and it’s not alone. Below, crowds at McCarthy’s Restaurant still need to be waited on, despite a labor shortage in town, so owner Diane McCarthy finds herself filling coffee cups and directing people to their seats, too.

All these signs saying “Sorry, but we’re closed,” all the way down the Mountain Road, and the rest of town too, show a common theme — there are no workers to be found, and it’s taking a divot out of business.

Harvest Market’s new fall hours are listed as Wednesday through Sunday, rather than seven days a week.

The Whip Bar and Grill, which had offered lunch and dinner throughout the week, is now closed for dinner on Wednesdays.

There’s just not enough staff to keep up a seven-day-per-week schedule, said Patti Clark, innkeeper for the Green Mountain Inn, which houses The Whip.

“We really cannot run at the level we need to, and be successful for our customers. It’s terrible. I’ve been here 30 years and we’ve never closed the restaurant” except sporadically for deep cleaning, Clark said.

“That was a very tough decision we made about two weeks ago. We’re hoping it’s temporary.”

Clark says she has about 100 employees on payroll, and needs up to 20 more to run at full capacity, from experienced line cooks to waitstaff to housekeepers.

“All summer, we’ve been understaffed in those departments. It’s put a lot of pressure on the operation and meeting the guests’ expectations. It’s stressful in the workplace for coworkers taking on additional load to provide the service that we expect to give our customers,” she said.

With The Whip’s Wednesday closures, people have to look someplace else to have dinner, and Clark could refer up to 200 people a night to other restaurants.

“McCarthy’s closed recently (temporarily). Our breakfast numbers rose drastically, and again, it put a lot of pressure on our operation, because our staffing levels are such that to incur so many additional covers because of somebody else being closed really impacted us,” Clark said.

‘A lot of extra hours”

She’s feeling the labor pinch, too.

Throughout her conversation with a reporter, McCarthy was filling coffee cups and directing breakfast customers to their seats.

She works “pretty much every day,” she says, because she doesn’t have the staff she needs.

“Everybody is putting in a lot of extra hours,” she said.

So far, she hasn’t had to change her standard operating hours, but her staff doesn’t have the time to craft signature weekend specials or creative menu options right now.

It keeps her up nights.

“I’m an optimistic person,” she said, and she likes to think hiring woes will get better, “but when absolutely no one applies, or you ask them to come in and they don’t show up, it’s pretty frightening.”

McCarthy has about 15 people on staff, and needs about 20, especially in the back of the house, such as line cooks or dishwashers.

“Difficulty would be an understatement. It’s the worst I’ve ever experienced in town as far as the need of help,” Handwerger said.

He’s fortunate because many of his employees have been with him a long time, and turnover is low, but he knows firsthand that other restaurateurs are even worse off than he is.

Handwerger is working almost every day, and says the ads he places online aren’t netting people he wants to bring into his kitchen.

“Anytime you stretch yourself too thin, you’re not at your best,” he said.

At the Green Mountain Inn, Clark says she pitches in from time to time, but as a manager, it’s hardest for her to make sure all her departments have what they need to function.

“I’m kind of worried about the whole company and trying to fill those positions,” she said.

Summer and fall are the busiest seasons for Green Mountain Inn, so things will likely slow down for a bit once the foliage starts to drop off the trees, Clark said.

Unfortunately, that slow season makes it hard for the inn to hire workers from foreign countries here on visas, since, to justify their employment, she needs to prove need, and this year, she wasn’t able to do that, since things slow down so much in the early spring.

Next year, since she’s short so many staff members, she thinks she’ll be able to justify as many as eight visa workers, but that doesn’t help Clark fill the ranks right now.

“People are not applying. Those that are, are lackluster,” Handwerger said. “I’m having a hard time finding bodies, let alone capable bodies.”

McCarthy advertises for employees on Craigslist, Facebook, Front Porch Forum, job boards out of state and word of mouth, but says some of the nibbles on her hooks aren’t from the right fish.

Sometimes, people set up interviews and don’t show up, or call back and say they’re not interested in the job anymore, she said.

Not many people apply to her job postings, either, she said.

She thinks people today take a “laissez-faire” approach to employment.

“I don’t know if they really take it seriously enough,” McCarthy said.

Clark said she still won’t hire anybody without a background check and work references, but admits she can’t be as discerning as she has been in the past.

“We’re not going to hire somebody who we feel is not the best fit for the company, but we don’t have a lot to choose from right now,” she said. “We’ve had people (who) have set up interviews and then they’ll call and say, ‘I found a job somewhere else.’ I find (in) the hiring climate, if you’ve got a live body applying for a job, you’ve got to grab them then or they’re going to go next door.”

McCarthy and Clark agree: Something has to be done on a larger scale than simply placing ads for new hires.

Signs on the door aren’t working anymore, and McCarthy said that’s because the problem is statewide.

The state’s low population means everyone is responsible for a larger tax burden, and the Legislature’s consideration of raising the state’s minimum wage to $15 per hour by 2024 means businesses will have to raise prices and alienate customers or further thin employee ranks.

“This is a tough state to do business,” McCarthy said.

She thinks the lack of affordable housing in Stowe is part of the problem; if people can’t live where they work, it can cost a lot to fill gas tanks to get them to work, and they might not be willing to commute up to an hour to get there.

“I hate to look to the future and see what’s happening,” McCarthy said.

“It really needs to be discussed with the business community. What resources do we have in each business that we can work together on in improving our staffing levels?”

Clark is thinking of the possibilities of working with an employment agency with other Stowe businesses, sharing workers with other businesses or pooling resources to provide busing to parts of the state with higher unemployment levels.

“We have to be creative and think outside the box a little bit. Placing ads is just not driving enough employees in our direction,” she said.

“We’re not alone in this. I’ve had other properties calling me and wanting to share employees, pretty much stating that they’re desperate, too,” Clark said.

“I just hope we can have some resolution,” McCarthy said.

It’s the end of a delicious era: McCarthy’s Restaurant will close its doors after one last day of service — and a party — today, Oct. 31, 2019.