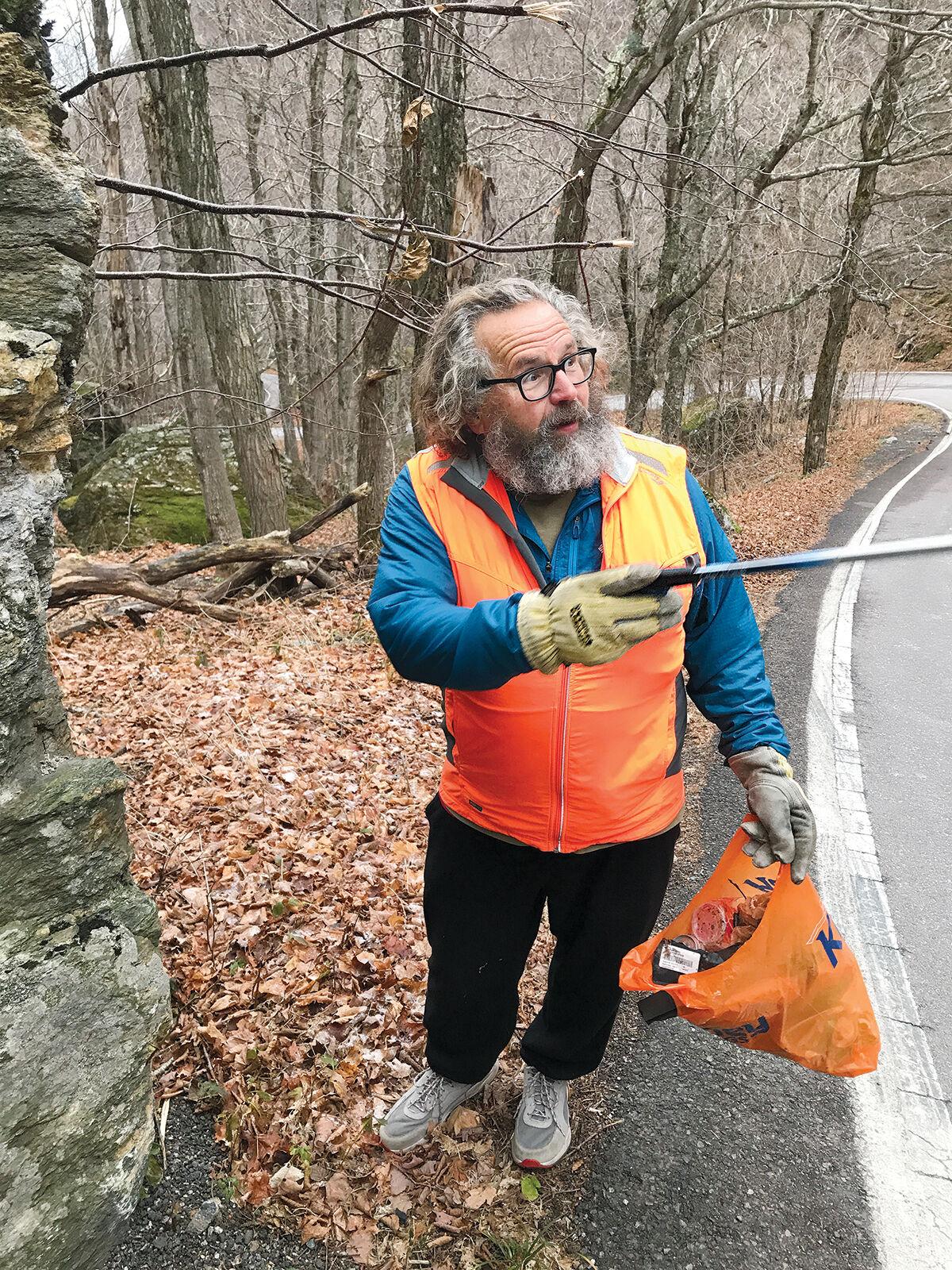 Paul Sakash is a regular fixture in Smugglers Notch where he walks and picks up other people's trash. 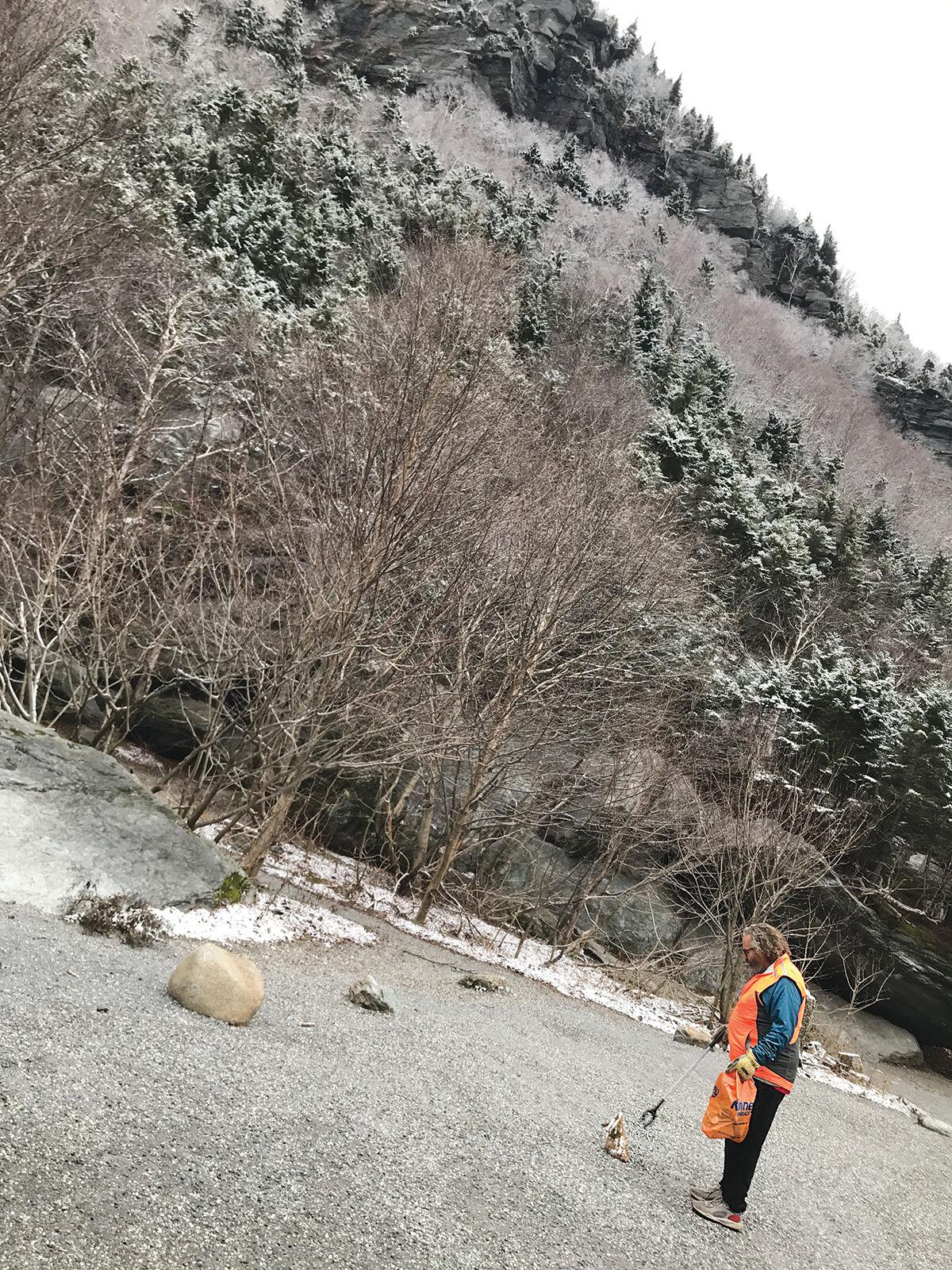 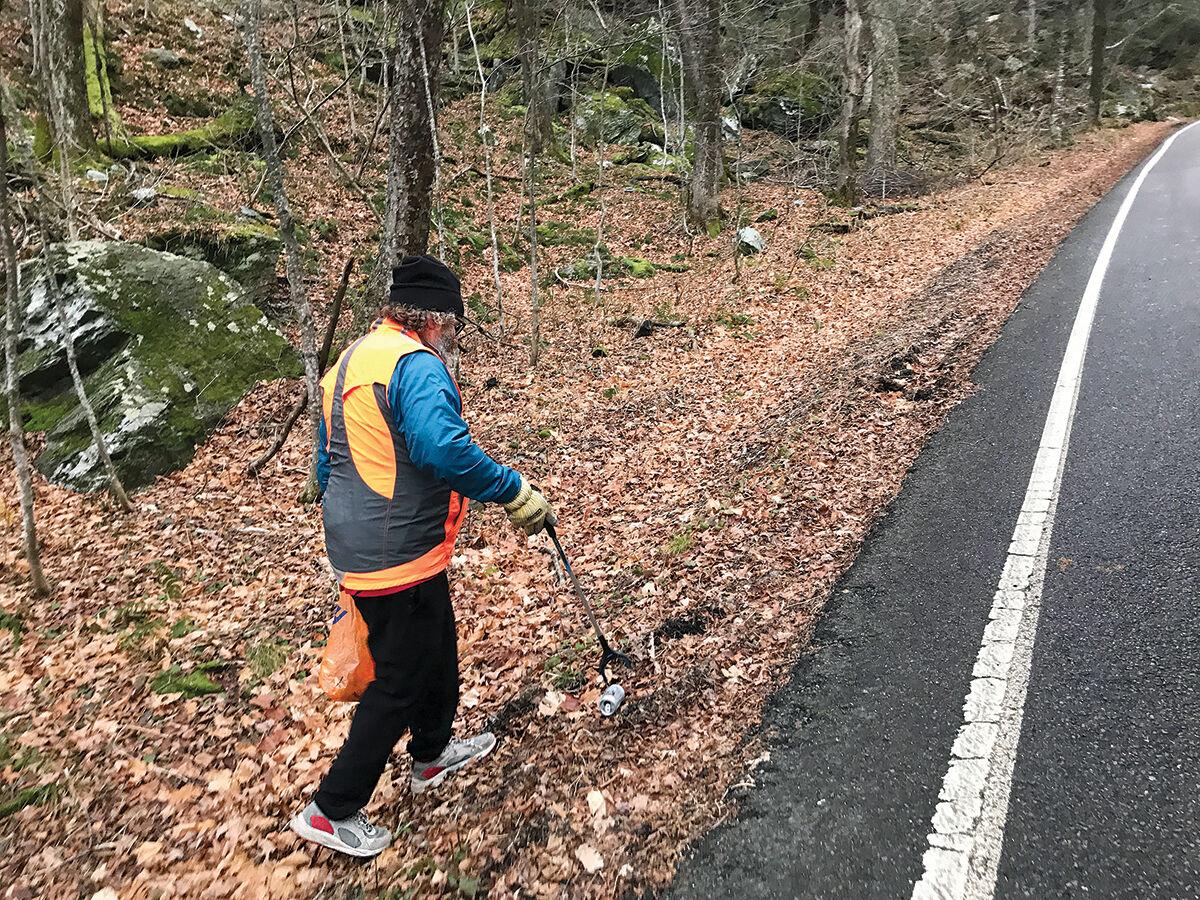 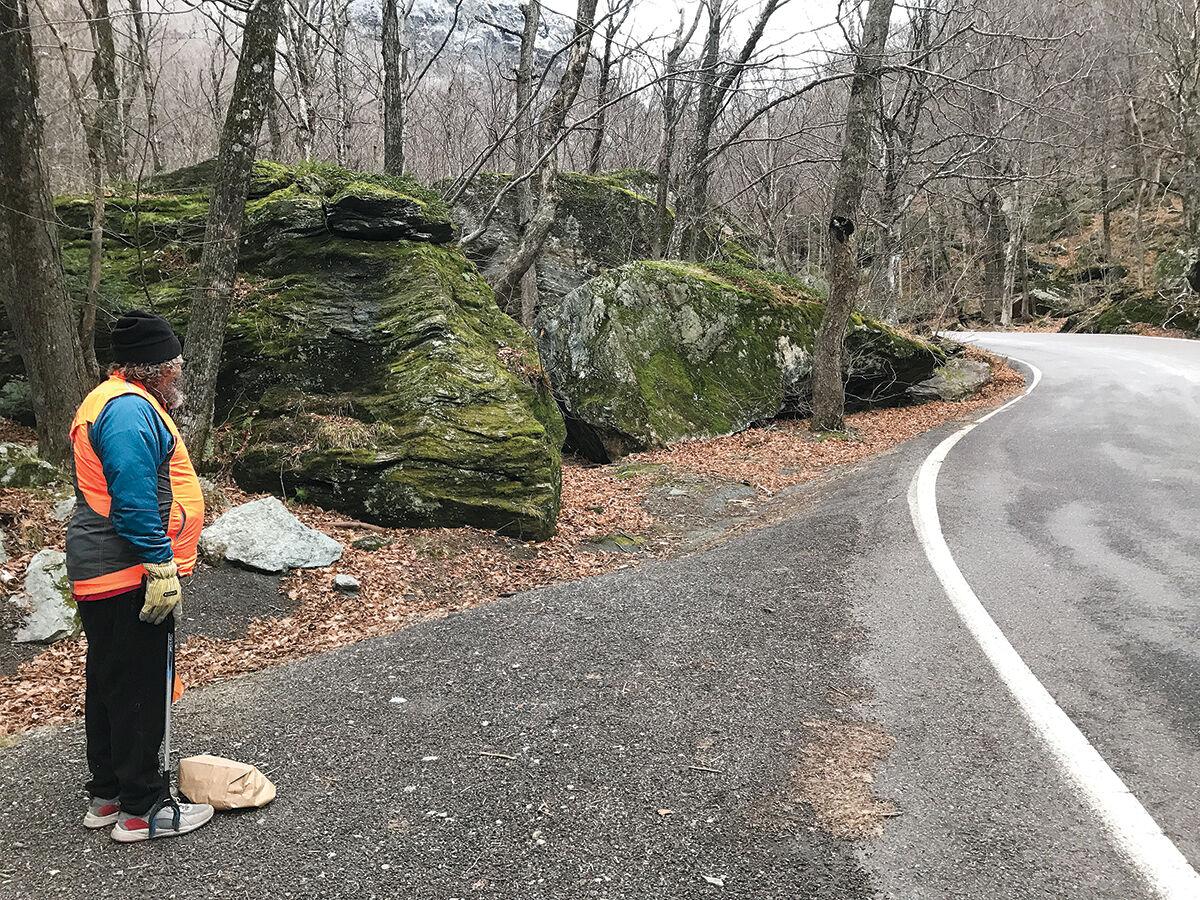 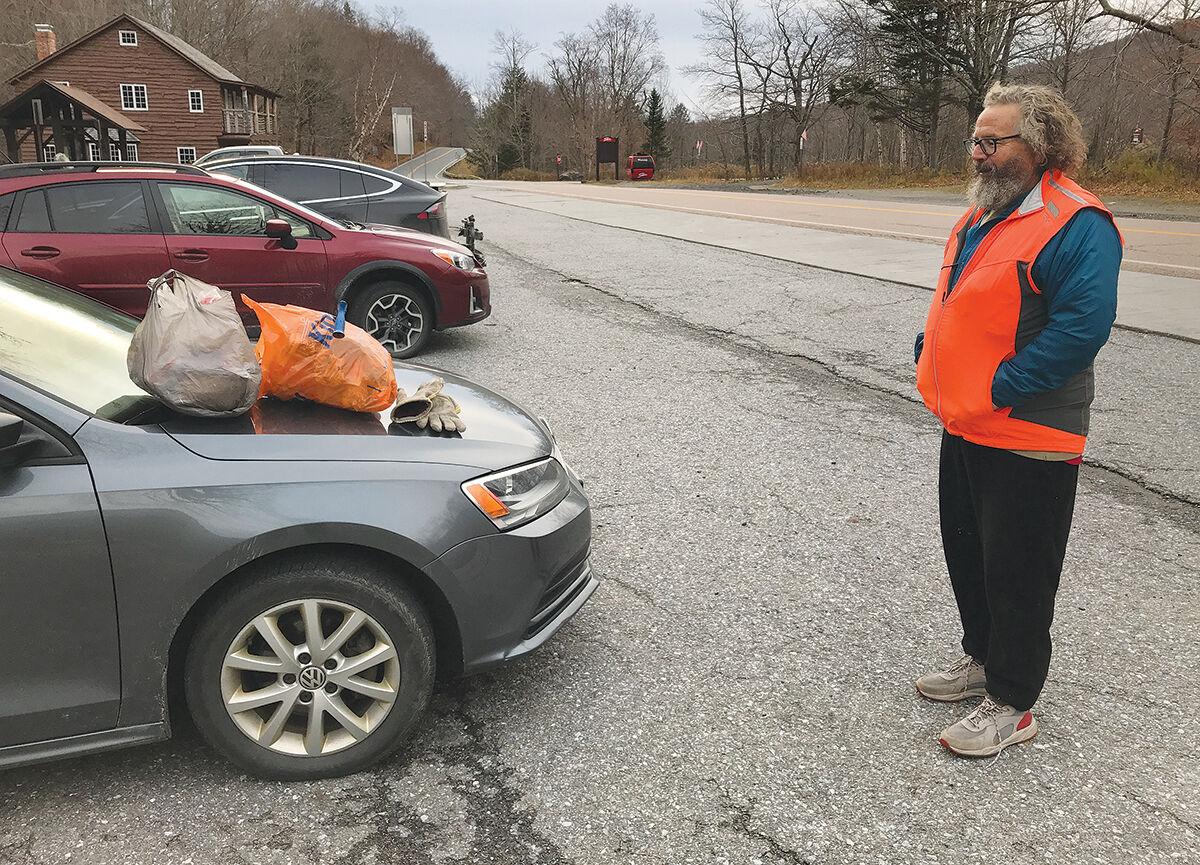 Paul Sakash is a regular fixture in Smugglers Notch where he walks and picks up other people's trash.

Paul Sakash gets out of his Volkswagen in the parking lot of Barnes Camp, the Route 108 entry to the steep and twisty turns of Smugglers Notch, puts on his work gloves, his bright orange vest, and pulls out his tools: a bright orange Kinney Drugs bag and his trusty Grip’n Grab tool, breath visible in the chilly 7:30 morning air, two days before the clocks will insist it is 6:30.

And then, he walks to the top of the Notch and back, stopping every time his sharp eyes see a bit of trash, using his Grip’n Grab to grip and grab it and put it in his bag. Like he did a couple of days before, like he’s done just about every day on Stowe’s roads since last spring. In three days, the Election Day storm will close the Notch road, but temperatures should soon be in the 60s, so the walks will continue.

And as the bags of trash will continue to get filled, because if there’s one truism about human beings, even in Vermont, it’s their propensity to trash their surroundings.

“I’m not saving the world or anything like that,” he said, more than once on his walk last Friday. “I’m just doing my part.”

Sakash has gone for his walks around Stowe — either the four-mile up and back from Barnes Camp or a three-mile loop from his home at the base of Brush Hill through the village and back, or both — for more than 200 days this year. He had a streak of more than 180 days somewhere in there.

His burly beard and long curly hair, combined with an orange vest and trash bag sometimes get him confused with, well, other hirsute people with orange vests picking up trash on the side of the road.

That is, unless you grew up in Stowe, like Sakash did.

“He makes me smile every time I see him,” said Mary Skelton, who lives on Pleasant Street. She was in school with Sakash’s older sister Debbie.

She saw him just the other day as she and some friends were prettying up the Peace Park, that triangle slice of green formed by Pleasant and Maple streets, across from the church. She’s just one of the people who called or emailed the newspaper and said, “You know, there’s this fellow …”

Sakash is an easy conversationalist and only once does politics come up during Friday’s four-miler, despite it being just a few days before an Election Day that still hasn’t been decided. And even then, the politics are about the power lines being buried in town. He doesn’t think the town should have borrowed $3 million for them, that’s all.

There is plenty of pontificating on the sociological observations gleaned from picking up other people’s castoffs. The top three alcohol containers are Twisted Tea and Mike’s Harder in various sugary concoctions, followed by trusty old blue Bud Light 24-ouncers. But those spiked seltzers are starting to catch up.

There was a diaper once. He picked that up. But dog poop in bags? C’mon, people.

“Luckily, I’ve only found one syringe,” he said. “I ended up putting that in a bottle.”

After a few years of these walks, Sakash started picking up cigarette butts, which are even more ubiquitous than Twisted Teas and harder to see than Mike’s Harder. Unless, that is, you walk by a place where a road-work stop-sign flagger had posted up for a previous day’s job. It’s like the scattering of sunflower seeds around a Major League Baseball manager.

Sakash sees cigarette butts the same way a forager will see morels. On this cold Friday, some of the butts are frozen and stuck to the road. He uses his gadget to make a couple grabs at them, but lets them be when they prove too stubborn.

Maggie Morrissey, who also grew up in Stowe, hanging out with her friend Heidi Scheuermann, another Stowe native and the town’s representative in the Vermont House, said Sakash told her recently about his relatively recent attention to cigarette butts.

He doesn’t get angry about it much — although he amicably rants about whoever left the 12-pack of Corona empties off the side of the road and a bit over an embankment. There’s something very 2020 about that find.

“I’m past being pissed off about it. I just get a little depressed,” he said. “There’s so much up here, and people just don’t think twice about it.”

To many people driving through Stowe, whether via Route 100 from Morristown or Waterbury, or up and over the Notch on Route 108, Sakash has become a fixture on Stowe’s highways.

To many others, Sakash has been a fixture in town all his life.

Sakash’s friend Rusty Dewees — known around these parts as Rusty but around the rest of Vermont and beyond as The Logger — said of Sakash and his siblings, “You could call them old Vermonterish in that they are very, very, very steady.”

Dewees said when it comes to folks like Eric Adams, or recently-departed Stoweites like Dale Percy, Ken Strong or David Stackpole, he’d know where to find them during the day if he wanted to drop in and chat. He said Sakash is like that.

Now, if you want to find Sakash, just go for a ride through Stowe, and you’re likely to see him.

Dewees thinks he could keep it up for decades if he wanted. “If everyone had a little bit of Paul Sakash in them, there might be little more community action. He’s a Stowe guy and he’s always been a Stowe guy. It’s the old, ‘I’m not gonna complain about it, jeezum, I could do something about it.’ ”

Sakash hasn’t seen his girlfriend Lucie since the pandemic was declared. She lives in the Eastern Townships of Quebec, and when the border closed, they were stuck on their respective sides.

Lucie’s not fond of all the hair, which he started growing out last November, aiming to do it for one year as a way of marking his entry into retirement.

She can’t surreptitiously trim it while he’s sleeping, as she is wont to do, so it grows as it will. They communicate on Zoom.

He leaves unanswered a question about whether that’s why he fills his days with seven miles of walking, if he’s restless or lonely. But Sakash doesn’t cut a fidgety figure. He’s just steady.

He started his daily walks as many other people do, to lose some weight and get in shape. He’s not tall and he’s not slim, but he’s lost 30 pounds and he motors along with steadiness, geniality and modesty. He’s a bit like a hobbit, and that’s a compliment.

Larry Lackey, another Stowe longtimer — his parents owned the village variety store with the same name for decades — has joined Sakash on his walks through the Notch. A runner and cyclist, Lackey once rode his bike up Mountain Road and saw Sakash walking, plopped his bike in the woods, joined on the walk, and rode back home.

Lackey has been friends with Sakash since junior high, playing basketball together. Lackey likes exercise, but he marvels at Sakash’s consistency, and the bonus trash removal that goes along with it.

“If it were me, I think I’d be so frustrated, to pick up trash one day and there’s more right behind it,” Lackey said. “And the Notch? That’s something.”

When Sakash started his village loop this year, he couldn’t even make it all the way from his house at the base of Brush Hill to midway down Maple Street before filling a bag. The next trip, he made it further, but still didn’t finish the loop.

Eventually, he was able to do a whole village loop without running out of bag space.

When he modestly says “I’m not saving the world or anything like that,” he’s technically telling the truth.

But, it’s pointed out to him, he has made a discernible dent in the amount of roadside trash in Stowe village.

What was once an insurmountable quantity of motorized humanity’s castoffs is now manageable, and that’s because Sakash keeps walking.

“Maybe it’ll inspire people to do it, too, maybe adopt a little stretch of road somewhere else,” Lackey said. “I think a lot of people think picking up trash is something you only do on Green Up day, but litter always happens.”