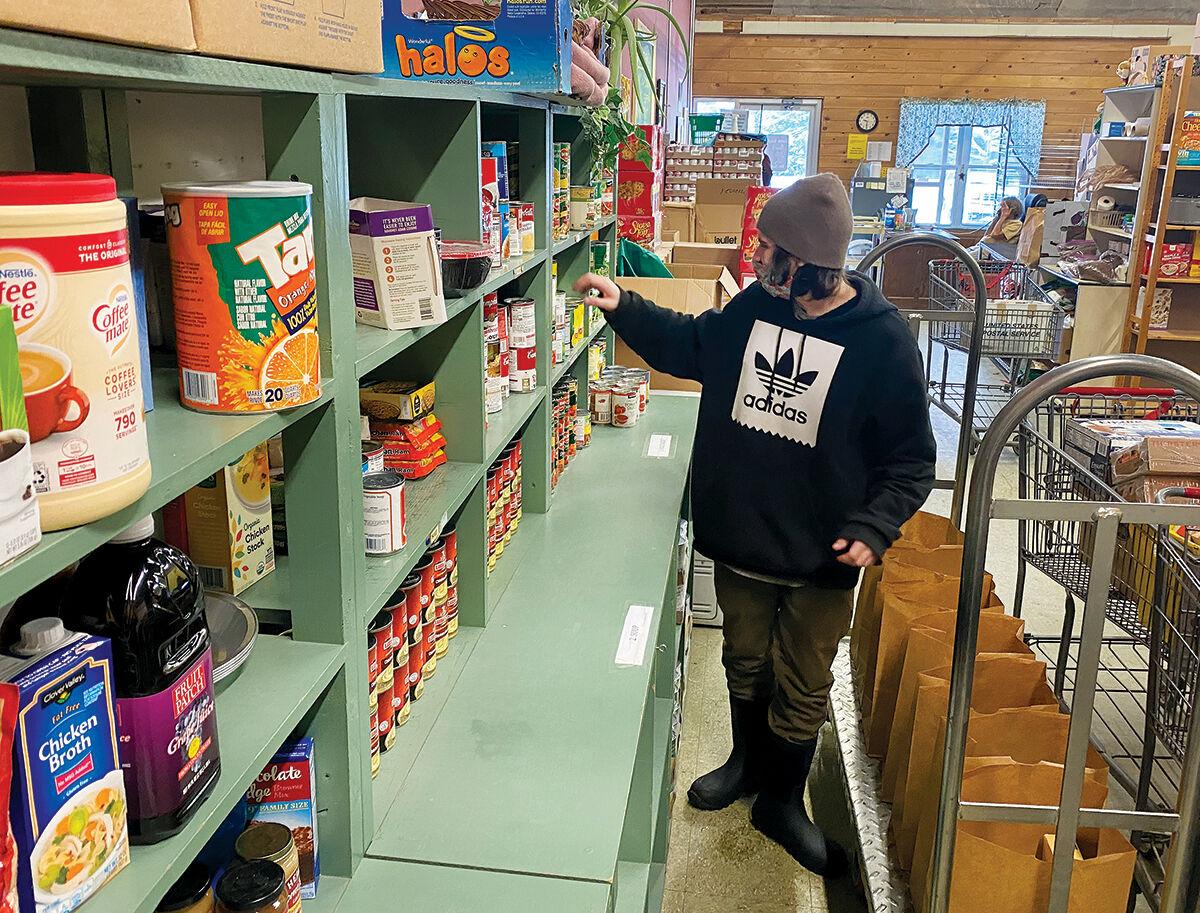 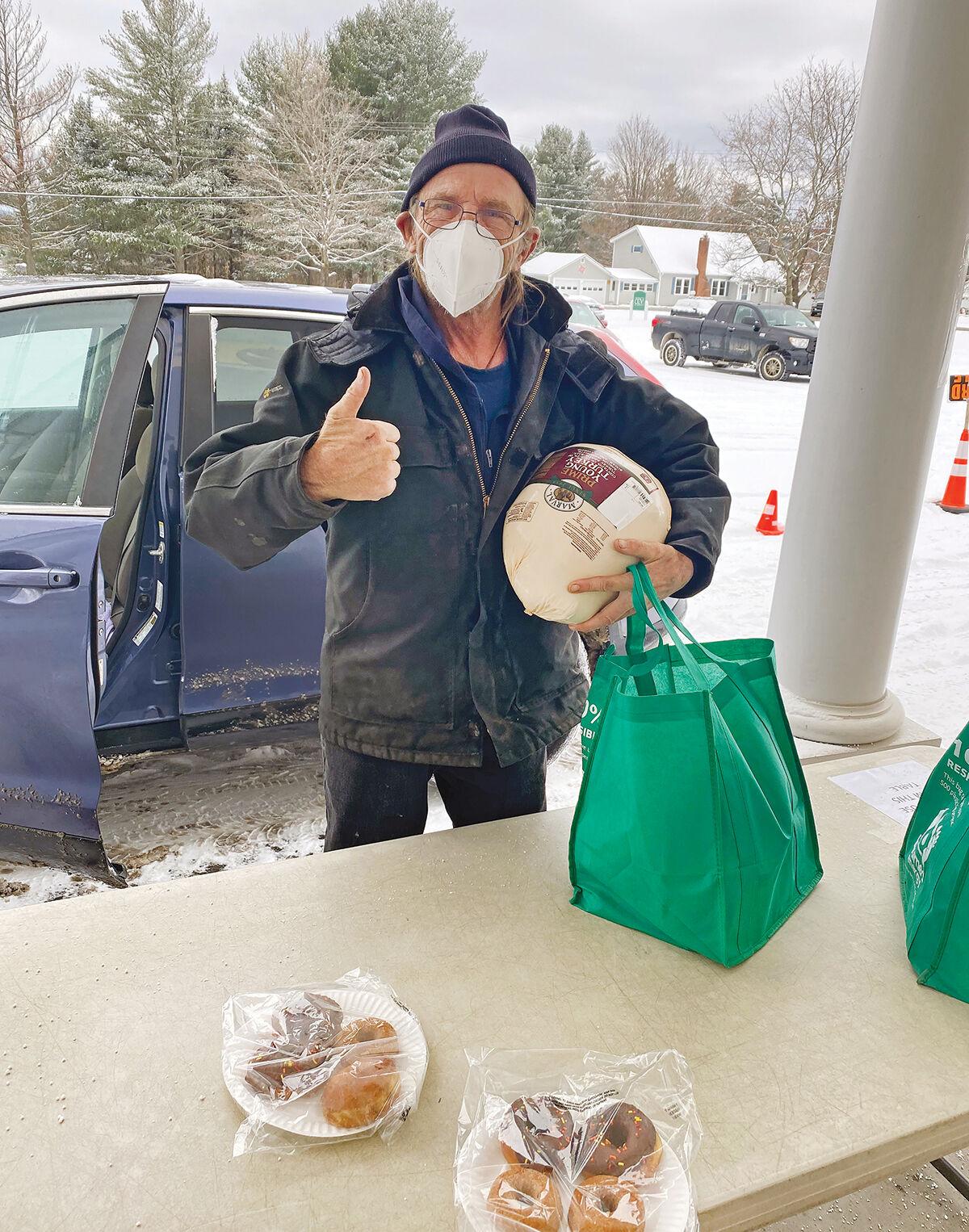 Larry Lathe is appreciative of the turkey and other items he picked up before the Thanksgiving holiday. 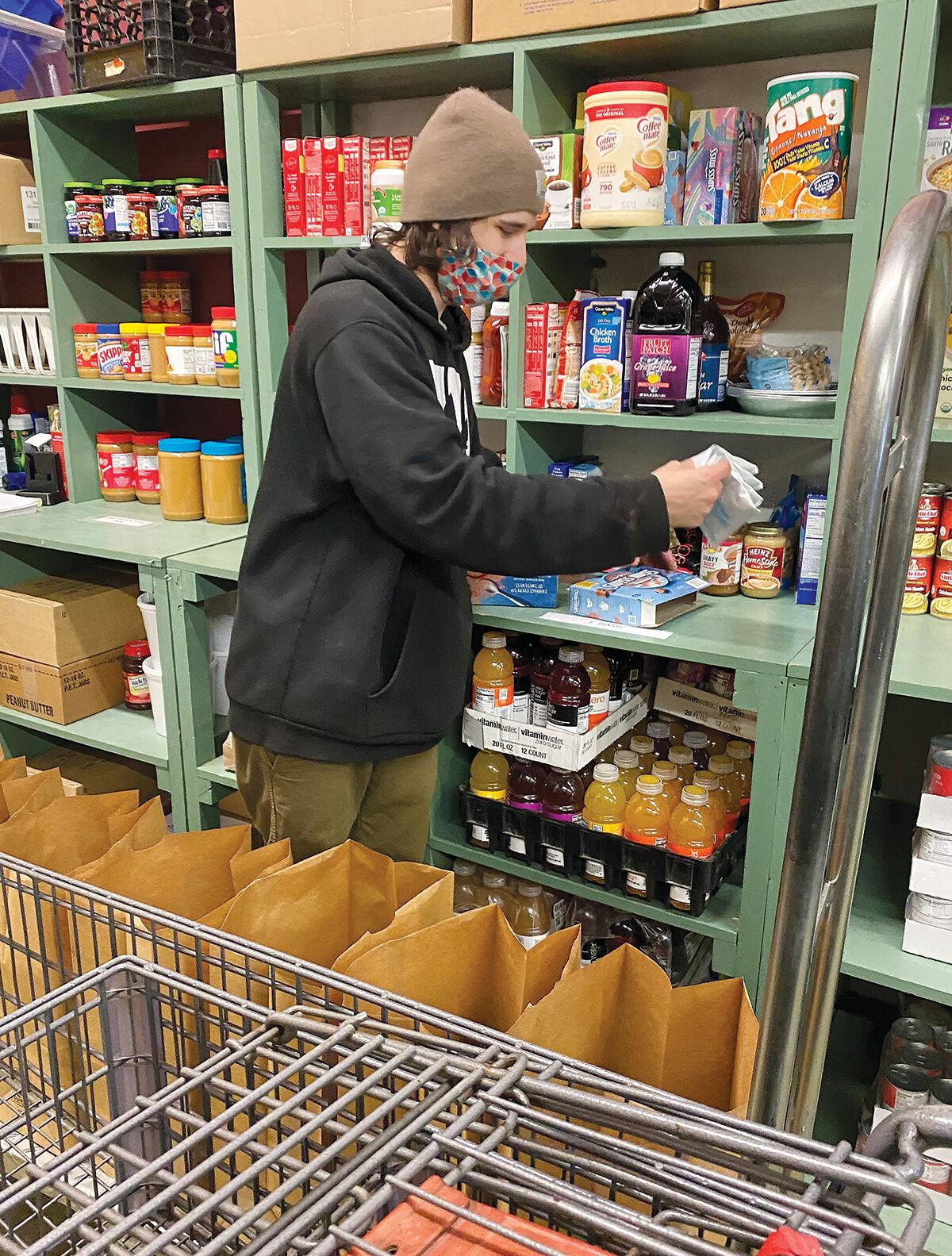 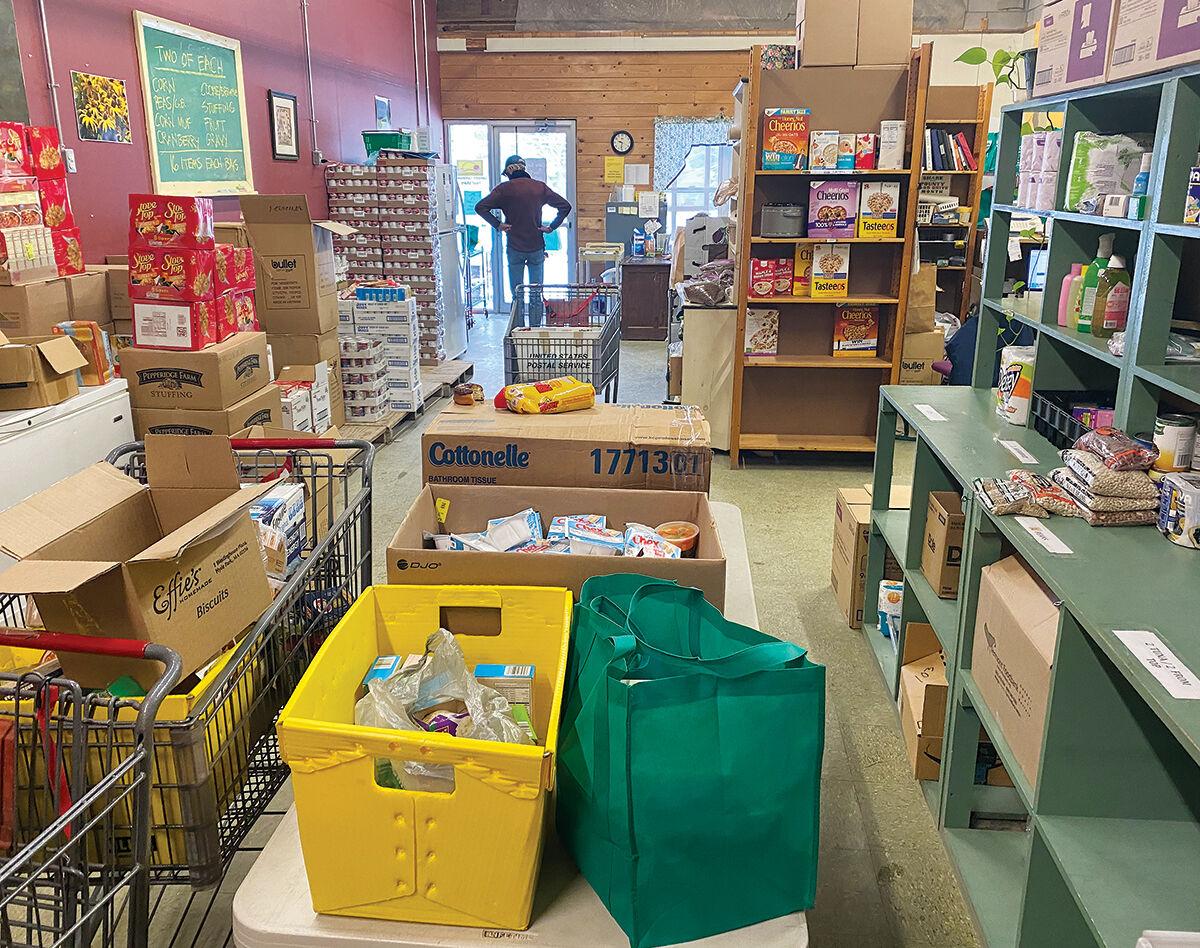 The Lamoille Community Food Share has its sights on making sure people have plenty of food to celebrate the holidays this month.

Larry Lathe is appreciative of the turkey and other items he picked up before the Thanksgiving holiday.

The Lamoille Community Food Share has its sights on making sure people have plenty of food to celebrate the holidays this month.

The Lamoille Community Food Share served 791 area families turkeys and all the trimmings for Thanksgiving this year, and now has its sights on making sure people have plenty of food to celebrate the holidays this month.

Meanwhile, Meals on Wheels of Lamoille County signed up more than 40 new people in the past month, and worked through a coronavirus scare, to make sure more people than ever have food delivered to them.

They’re just two of the local organizations working to fight hunger in Vermont in the midst of a raging pandemic, wondering if the provisions in the federal Coronavirus Aid, Relief and Economic Security (CARES) Act will expire at the end of December and leave them high and dry.

“There will be a huge impact of thousands of meals just ending,” Susan Rousselle, outreach manager for the Food Share, said.

Fifteen years ago, Veronica Clarke had to rely on the social safety net that is largely sewn together by volunteers in order to feed herself and her two young children. Now, she’s working and taking classes and helping people who are now in similar situations.

“I think we’re pretty lucky here, that when things are really bad, there are a lot of people who want to help,” Clarke, of Morristown, said. “It’s like someone yelled ‘fire! fire!’ and people want to all come and help put it out.”

Clarke is helping out with the Lamoille Community Food Share’s efforts to make sure people don’t go hungry.

She said it’s the least she can do for a like-minded organization that helped her get on her feet.

Back in 2005, Clarke was living in Addison County, escaping a bad relationship, caring for two daughters, ages three and five, and driving a car that was about to give up the ghost. She was cleaning houses when she could find work, but that was only bringing in about $600 a month.

With the help of various community organizations, she was able to find a place to live — first a hotel and then an apartment.

During that time, she would go at least once a week to the local food shelf. That sustenance allowed her to gradually carve out a life for her and her girls.

She took classes at the local high school tech center, and learned some skills over the next decade that recently landed her a good job in Morristown. Now, she has a new husband she’s happy with and has two more kids, but the pandemic has slowed the family’s ascent out of economic insecurity.

Rousselle said she worries about what will happen when many of the provisions in the federal CARES Act expire, since that funding has greatly helped the Food Share and the Vermont Foodbank, either directly or indirectly. For instance, people’s CARES-funded enhanced unemployment benefits will end, unless Congress passes another aid package.

“We keep thinking the other shoe is going to drop, but then there will be an extension,” Rousselle said.

Enter people power. Rousselle said every time concern has crept in this year, people around the community and state have stepped up with help.

“The generosity of the community has been unbelievable,” she said.

She said she’s seen a 40 percent increase in visits to the food shelf, and it would be higher without all the myriad other events taking the pressure off food insecurity, from those massive food distribution events at airports around the state to the 25 holiday food baskets that the Hyde Park Second Congregational Church helped the Lamoille Family Center pack with holiday wreath sales.

She said donations are also up, but declined to say how much because, quite frankly, it’s never enough and she doesn’t want people to think the Food Share is all set.

Betty Whitcavitch lives in North Hyde Park, and has been receiving food from Meals on Wheels of Lamoille County since the beginning of pandemic, after the organization’s community meals in Morrisville were shut down.

Whitcavitch’s husband died 25 years ago, and she’s been living on her own ever since. Now 77, she says Meals on Wheels has given her a human connection she doesn’t get very often. She had been going to the community meals at the Lamoille Civic Center in Morrisville for the past 15 years, and she and a friend would play cards before dining together.

Now, her human contact comes mainly from her daily phone call with her friend and a visit from Meals on Wheels.

She says the solitude doesn’t affect her as much as some. Still, the visits are nice.

“It breaks up my day and I see a human at least once a day. I have a dog to talk to, but he don’t talk back so much.”

“It breaks up my day and I see a human at least once a day,” Whitcavitch said. “I have a dog to talk to, but he don’t talk back so much.”

Whitcavitch said she is “not the healthiest person in the first place.” She’s had cancer a few times and she’s aware that puts her in a compromised position when there’s a pandemic surging invisibly across the nation.

Thus, she avoids the grocery store.

Whitcavitch gives the food quality good marks, but she’s not picky. She doesn’t do much of her own cooking.

“I guess I’m what you call a farmer’s cook. I’m a meat and potatoes kind of person,” she said. “My husband would like things like spaghetti, but of course he did more of the cooking in the house. I did the dishes.”

“The challenge we face is just making sure we can maintain that safety net,” Grisgraber said. “People naturally want to go into homes and make sure people are OK.”

When the pandemic forced people to work from home, there was an unexpected boon for the organization: more people signed up to volunteer and deliver meals. And, while most drivers are retirees, many of new volunteers are younger professionals with a little more time to spare.

“So, our volunteer base is more diverse than ever,” Grisgraber said. “Now, we have people who can take an hour off from work and help out.”

The recent surge in COVID-19 cases has also had effects. Grisgraber said last week that in the previous 31 days, there were 49 new clients seeking meals, a spike the group hadn’t seen since March, when the pandemic was first declared.

At the same time, the Thanksgiving holiday and the two-week quarantine requirements for people who gathered for multi-household dinners led to a temporary gap in route coverage. Grisgraber said half the routes were open last week as people were about halfway through their quarantine period.

On Nov. 10, someone at the new Meals on Wheels Munson Street location “had close contact” with someone who tested positive for the disease, and the group had to shut down for a few days, “out of an abundance of caution,” Grisgraber said. Everyone was prepared for that, however, and they had shelf-stable meals prepared ahead of time that could still be delivered by volunteers who hadn’t been in the building.

“It just goes to show you how much people rely on this,” Grisgraber said. “It affected 200 elders who didn’t get their regular meals.”

Family, homes and gatherings are synonymous with holidays. So, this time of year can be an emotional obstacle course for people, like senior citizens, who may be isolated from their families, alone in their homes and secluded by social distancing.