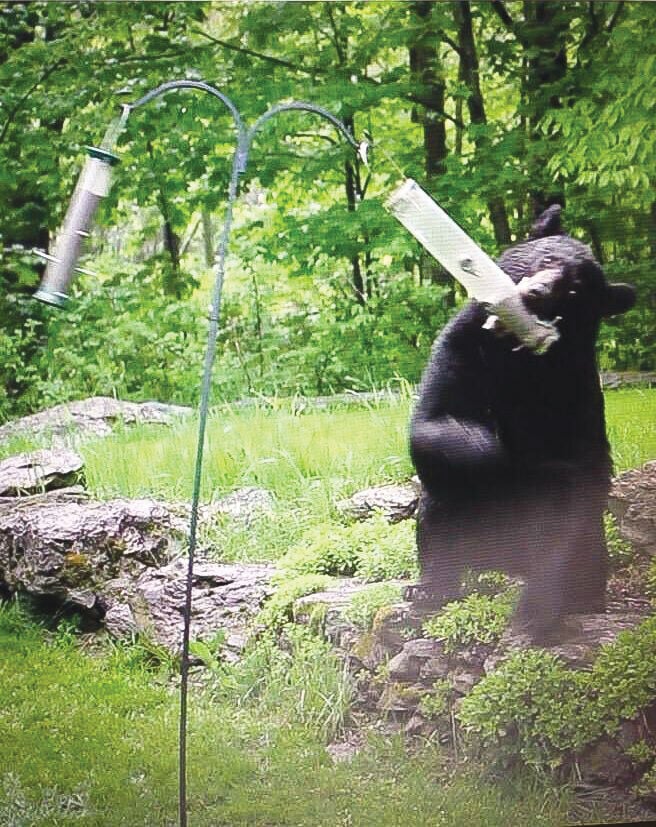 Officials warn Vermonters not to hang bird feeders during months when bears are not in hibernation. 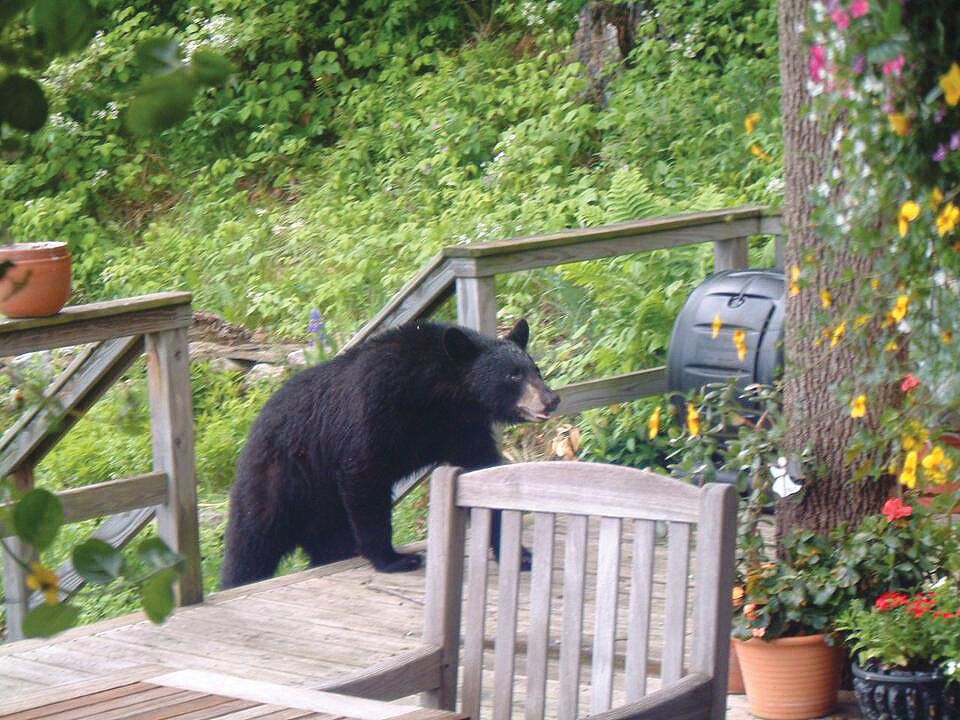 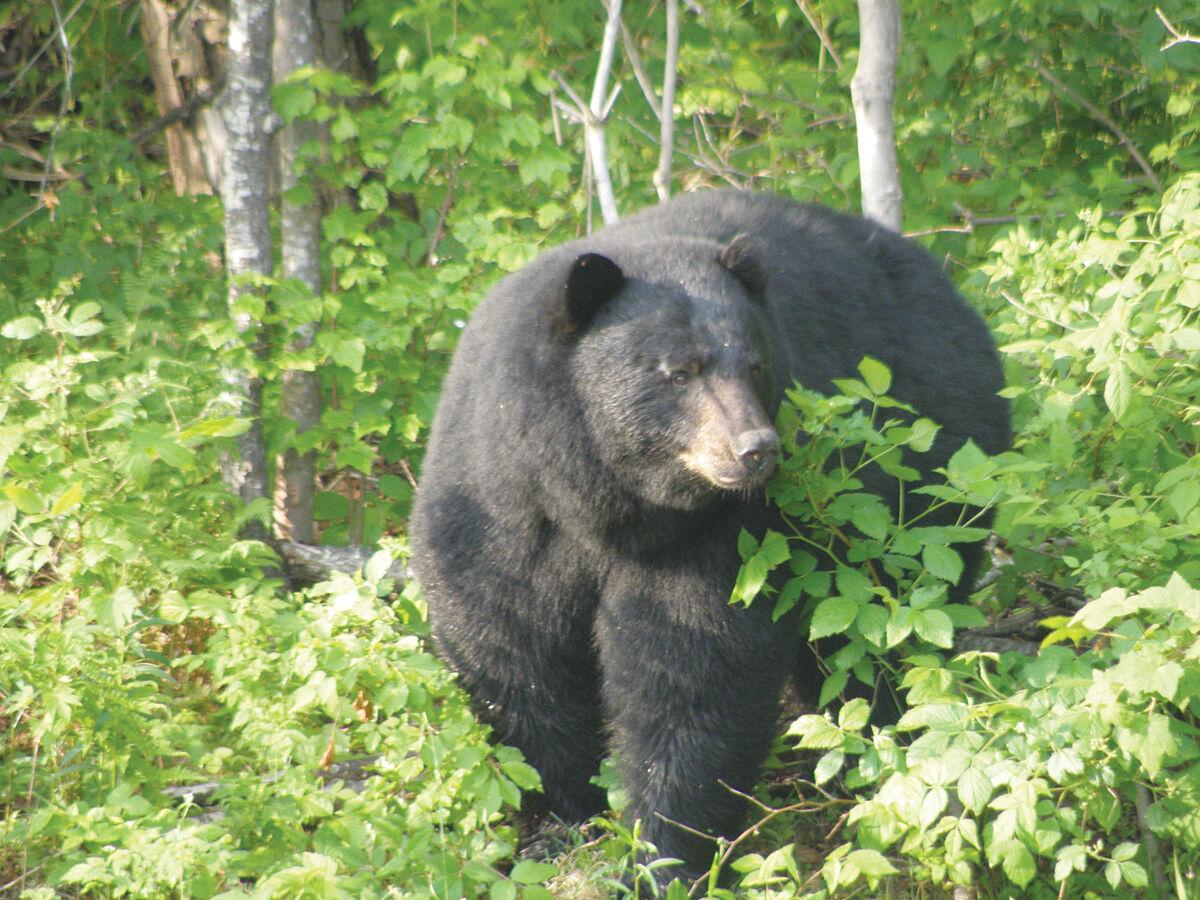 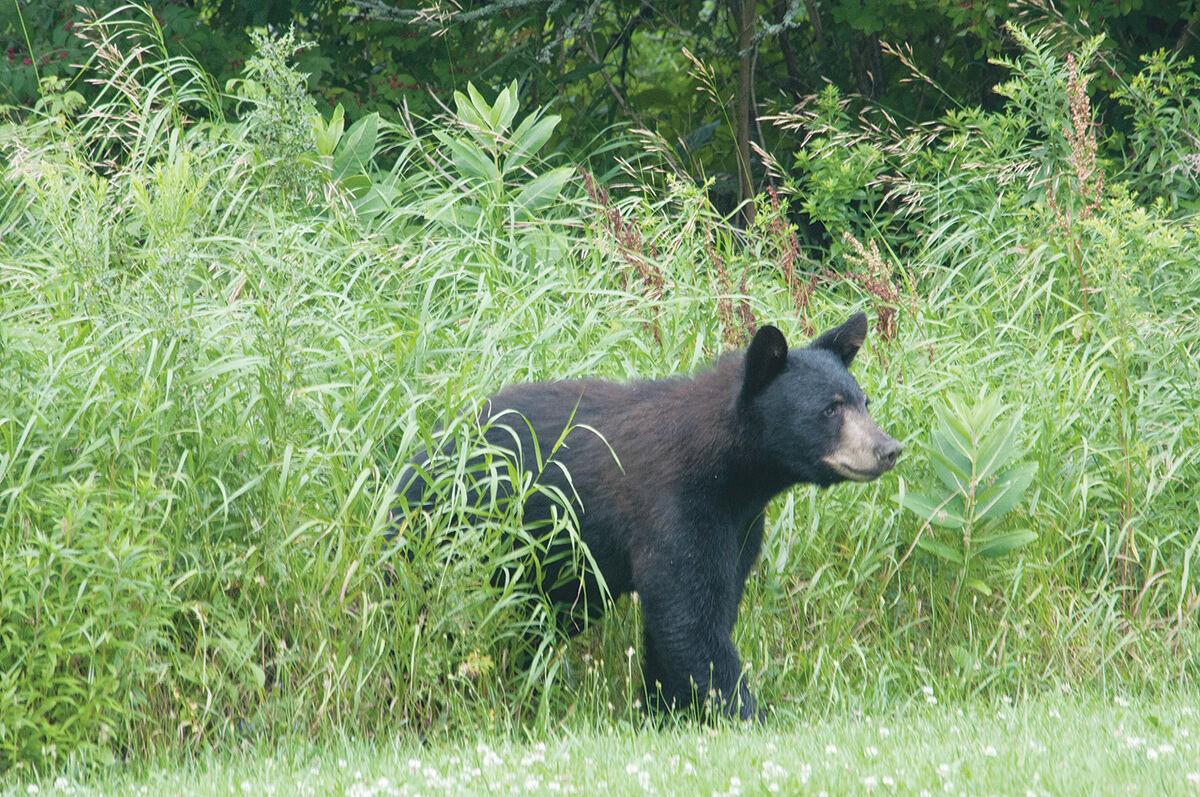 Officials warn Vermonters not to hang bird feeders during months when bears are not in hibernation.

Stowe has a reputation for a being something of a foodie town, with eateries catering to all manner of appetite.

Word appears to have spread to the state’s bear population.

Sgt. Chad Barrett, a game warden with the Vermont Fish & Wildlife Department, has never heard of as many black bear sightings in Stowe as he has this year. He said normally, by this time of the year, the bears have retreated back into the woods, where there’s more food for them.

But if you need to take in a few thousand calories a day, are you going to “truck up the side of a mountain” for a few apple trees, some raspberry bushes and beechnuts? Not when humans set out veritable buffets on their properties.

“Why do that when I can feed out of five Dumpsters, three restaurants and a handful of bird feeders and I don’t have to go more than 500 yards,” Barrett said.

He said the problem has been exacerbated this year because bears’ natural food sources have been in short supply. First, April and May were hotter and drier than usual, so the window for those early season succulents that bears like — think skunk cabbage, fiddleheads, dandelions and clover — literally dried up.

Second, this is an off year for apples and berries and other late summer and early fall food sources. So, they’re hungry.

And yes, Barrett partly blames the coronavirus pandemic for this problem, too. At least, it’s a theory. He said fish and wildlife experts think people leaving the city to come to Vermont — particularly Stowe — aren’t used to dealing with bears and other wildlife, and are just leaving odiferous and tasty trash out, instead of securing it.

“We do think a piece of it is COVID-related,” he said.

Bears on the move

You know you’ve got a black bear problem when two town government officials discussing the issue have to get off their Zoom call to shoo bears away from properties.

“We have a little boy and little girl who must be on their first summer without their mom, and they’re just cruising our area all the time,” said Brian Hamor, a member of the Stowe Conservation Commission who was one of those who had to get off a recent call to get rid of the young ‘uns, even as the commission was discussing bears and the new state law banning food scraps from the trash.

Hamor’s place is right on Mountain Road, abutting the Stowe bike path, a busy road next to a popular recreational feature in a tourist town. If bears are there, that’s alarming.

“These being young cubs, I think they’re just trying to find their way around,” Hamor said. “But we’ve never had bear activity before.”

Barrett said bear sows breed every other year, and if they go into the den healthy, they may have two or three cubs. And if mama is teaching those cubs that the best food is in the trash behind that popular new restaurant, then those cubs will pass that information on to their young.

“They learn very quickly what they can get away with,” Barrett said. “This has been brewing for a decade now, and they’ve bred five times in that decade.”

If they learn that humans are essentially giving away free food, they’ll make their way there.

Barrett, who lives in Waterbury, normally covers the region that contains Bolton, Camel’s Hump and the Sugarbush/Mad River Valley area. That’s prime bear country, the most active ursine area in the state.

Stowe is right next door, just a ramble through the Shutesville Wildlife Corridor on Route 100 between Stowe and Waterbury. From there, it’s a short trip on to Stowe Hollow, and, eventually, down into the village.

“An average bear in their own territory will cover five miles. A breeding bear will cover 20 miles,” Barrett said. “That’s like Morristown to Moretown.”

Vermont’s game wardens are assigned a handful of towns to patrol, although there’s plenty of overlap among contiguous coverage areas.

“All three of us have been extremely busy in Stowe this year, more than any other year,” Barrett said.

Stowe town planner Tom Jackman, also the staff support person for the conservation commission, said the town is researching bear-proof containers for the trash and recycling bins at the trailheads for the Stowe Recreation Path, at places like Thompson and Chase parks. They can get pricey, though, as much as $2,000 per unit for the high-end bins.

Jackman said some have called for the town to adopt an ordinance requiring people use bear-proof containers and order them to take down their bird feeders after winter, but the town has opted to go for an outreach and education approach.

For all the preservationist proclivities natural to game wardens, ultimately, when it comes down to a wild animal’s life or a human’s, it’s time for the beast to be put down. And few things bother fish and wildlife professionals more than the otherwise unnecessary killing of an animal.

Barrett has had to destroy innumerable bears, two of them in Waterbury Center earlier this summer. They had been getting into refuse at Cold Hollow Cider mill, a nearby apartment, and eight or nine houses on Maple Street. They’d become accustomed to easy food, and got aggressive when shooed away.

“I hated shooting both of those bears. I really did,” Barrett said. “I don’t like having to do that in those circumstances. It shouldn’t be done because of a nuisance.”

Also this year, he had to put down a bear that had broken into several houses near Sugarbush, one of which was occupied by an 80-year-old woman with a walker.

Another time, he recalled one bear had broken into 16 cars. It had gotten so adept at it that Barrett was reminded of the scene in “Jurassic Park” when the velociraptors figured out how to open doors.

Once, four or five years ago, a bear managed to get inside a Subaru and somehow close the door behind it. Barrett had to shoot that one in the car.

“It goes right back to that bumper sticker,” he said, the one that says “A fed bear’s a dead bear.”

“It goes right back to that bumper sticker,” he said, the one that says “A fed bear’s a dead bear.”

He did say that bears can be re-trained to stay away from humans, as long as humans stop giving them free lunch. The most basic rules apply, and start when there’s still snow on the ground: take in your birdfeeders.

Then, learn how to take care of your food scraps. It is, after all, the law now.

“They aren’t going to starve themselves,” Barrett said. “If people did what they need to do, they’ll say, let’s go back to our natural food sources.”

Elly Ventura is in charge of outreach for the Lamoille Regional Solid Waste Management District. In years past, she’s engaged in education about things like not putting Styrofoam in the recycling, and why wax-lined cardboard containers have to be trashed.

This year, it’s all about food scraps and compost; the state enacted a law July 1 that had been gradually rolled out over the past half dozen years that bans organics — coffee grounds and pineapple crowns, chicken wings and other edible things — from the trash.

The Stowe Conservation Commission is also on the education offensive, distributing tips on composting.

Ventura is a little distressed at the notion that people might start blaming compost and food scrap laws on black bear sightings. She said she doesn’t want “to make that logical leap” that bears are going to use your compost pile “as a Ponderosa.”

Instead, she urges people to dispose of their food scraps properly, and urges them to ask the waste management district for help. The district has an advanced composting operation available, Lamoille Soil, and takes buckets of food scraps for a dollar. They’ll also help with the tools and knowhow for people who want to compost at home.

“Compost in and of itself does not attract bears, and there are strategies and techniques to compost well,” Ventura said.

One of the most basic techniques that beginner composters forget to do is “manage your recipe.” This means for roughly every bucket of food scraps you add to your pile, or tumbler, or bin, you add three same-sized buckets of brown materials — such as dry grass, sawdust, shredded paper or cardboard, dead leaves.

This does two things. First, it gives the microorganisms the food they need to fire up their processes to break down food into compost. Second, it tamps down the smell.

“They’re what we call a ground shark. They’ll smell a trash can from a mile away,” Barrett said. “They use their nose, and not only will they follow smells, they’ll smell other bears, thinking they found food, and follow them, too.”

No bear hugs: Be aware of woodland neighbors