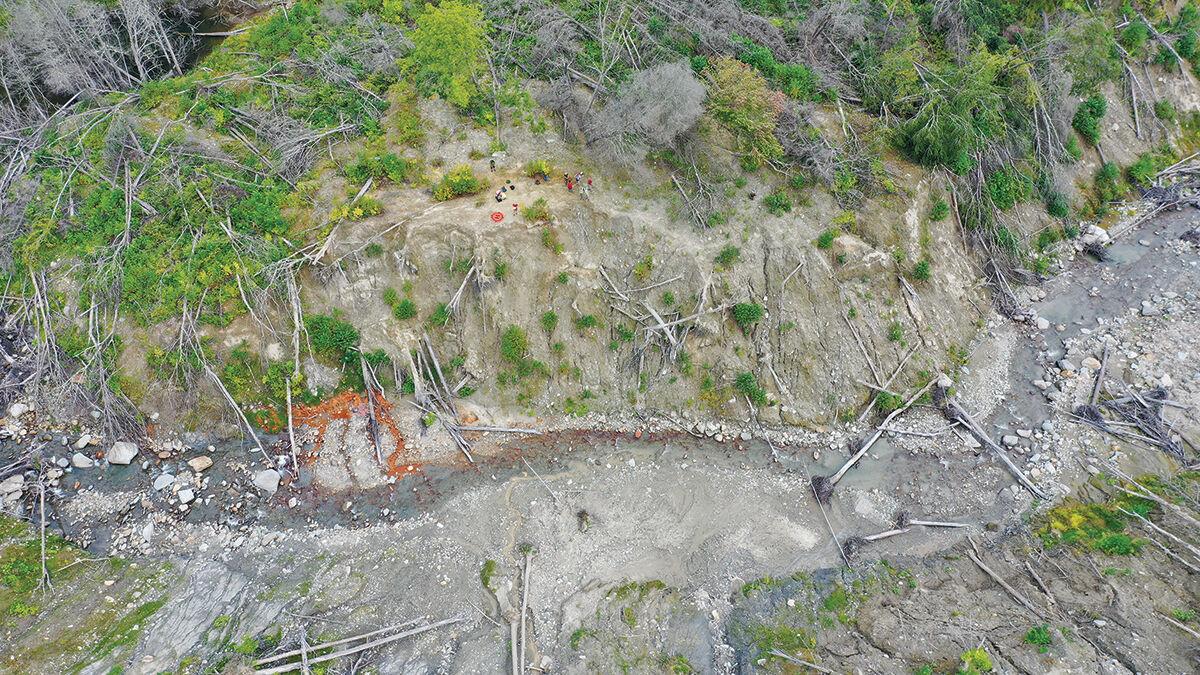 The Cotton Brook once again winds its way toward the Waterbury Reservoir, after cutting its way through incalculable tons of debris dumped by a 2019 landslide.

Geologists — seen from far above in this drone photograph from the Vermont Transportation Agency — visited the site Aug. 24 to see how much the landscape has changed two summers later. 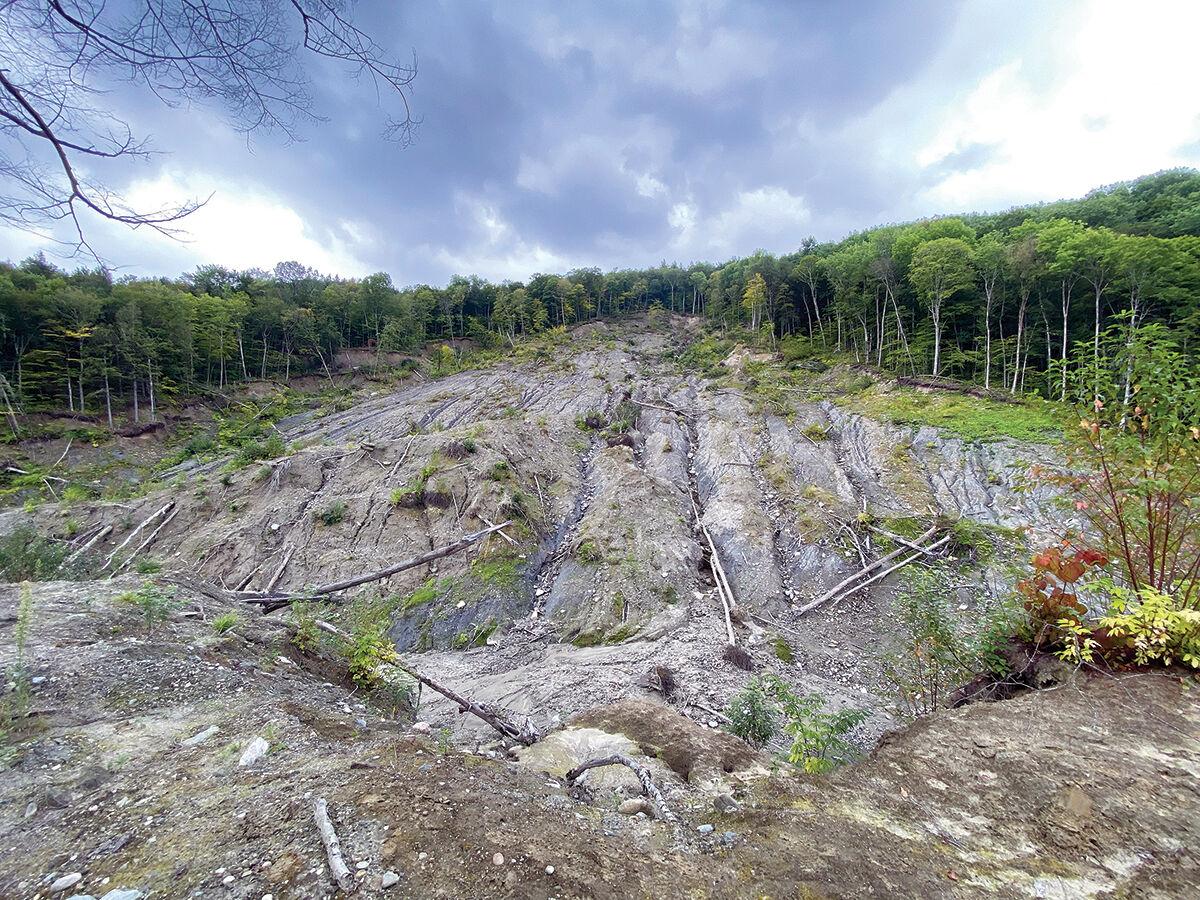 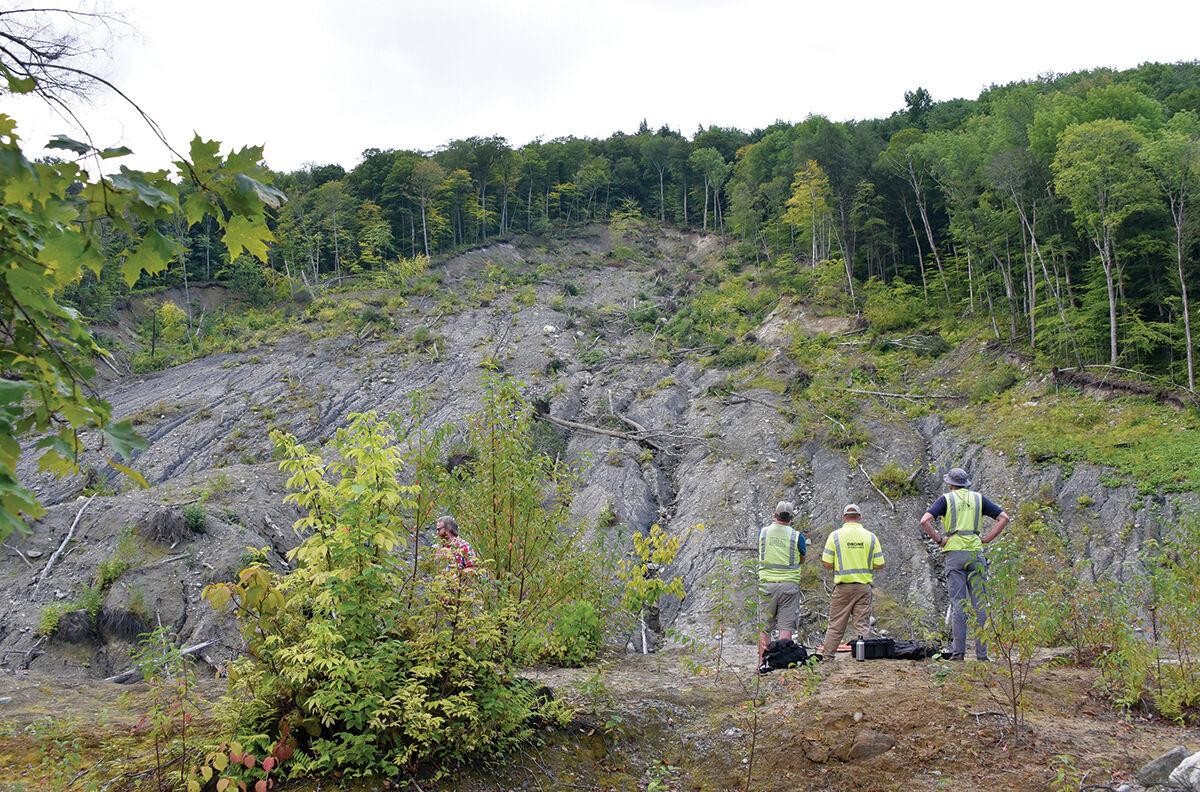 Geologists visited the site Aug. 24 to see how much the landscape has changed two summers later. 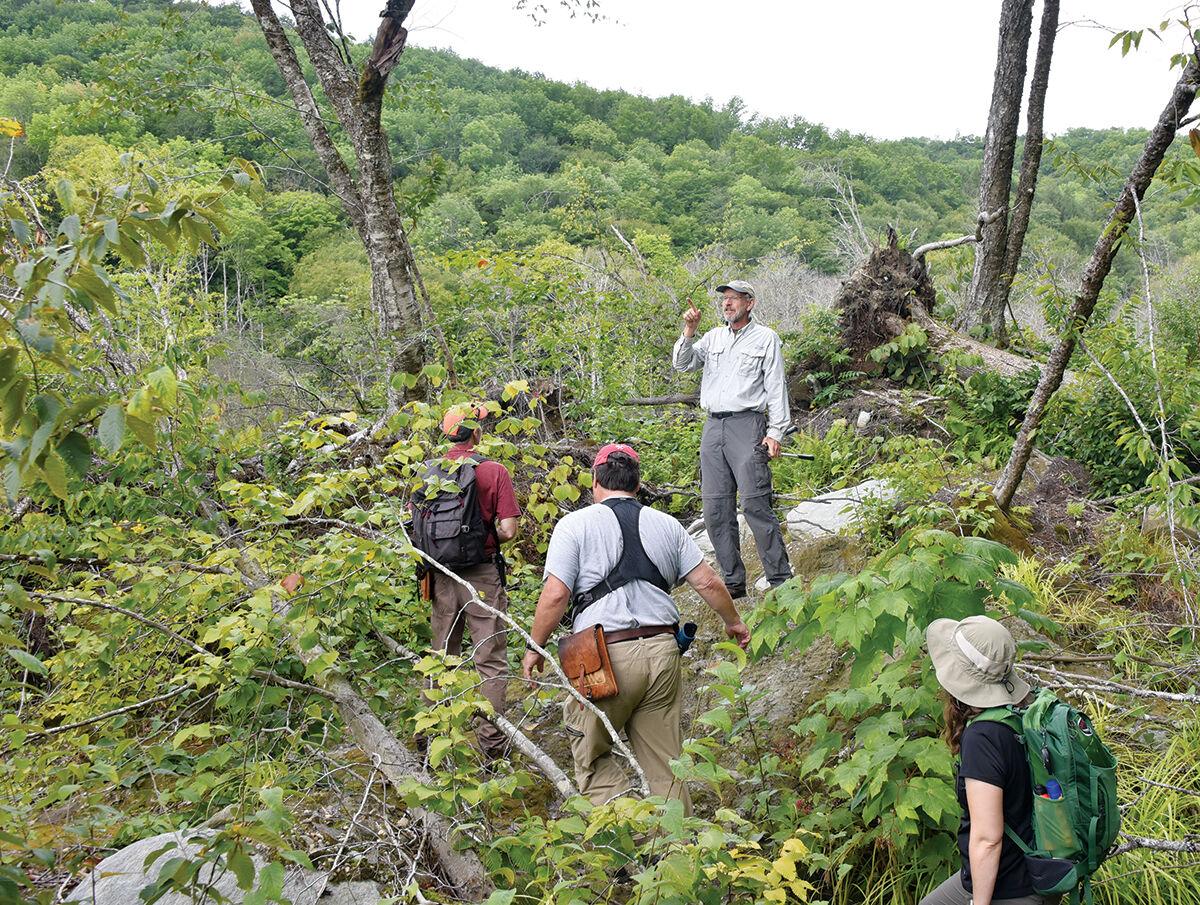 George Springston, a Norwich University geologist, stands on the “toe” of the Cotton Brook landslide on an Aug. 24 site visit, pointing out features from the 2019 slide. 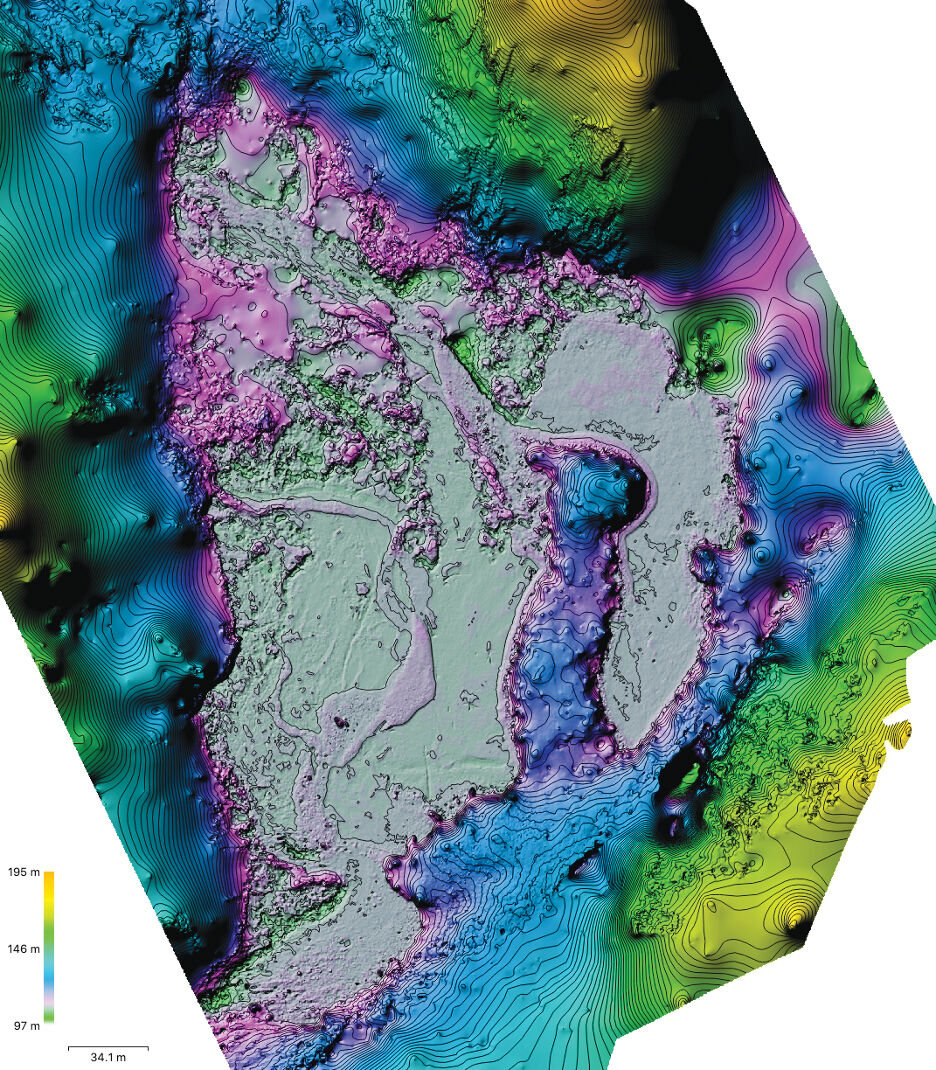 The Cotton Brook once again winds its way toward the Waterbury Reservoir, after cutting its way through incalculable tons of debris dumped by a 2019 landslide.

Geologists — seen from far above in this drone photograph from the Vermont Transportation Agency — visited the site Aug. 24 to see how much the landscape has changed two summers later.

George Springston, a Norwich University geologist, stands on the “toe” of the Cotton Brook landslide on an Aug. 24 site visit, pointing out features from the 2019 slide.

Geologists continue to study a 2019 landslide in the Cotton Brook area that wiped out a hillside and dumped tons of material into the waterway, to learn more about what causes such swift change and destruction, and to hopefully better predict when and where such phenomena could happen again.

Although they are looking at an event that occurred two years ago, the Cotton Brook landslide offered geologists a glimpse even further back.

On a recent trip to the landslide site — about two and a half miles up Cotton Brook Road from the parking area off Stowe’s Nebraska Valley Road — geologists from the Vermont Department of Environmental Conservation, Norwich University and the University of Vermont took stock of the landslide, which appears to have settled down. Mostly.

“The first time we went there in June 2019, we saw a landslide that was changing not by the hour but by the minute,” George Springston, a Norwich geology research associate, said. “Each time we went back, it looked different.”

Springston said although the best estimate is that the landslide happened abruptly on May 30 or 31 of that year, the slide remained active all that summer. The slide spanned about 12 acres — with another two or so coming down in dribs and drabs over the ensuing months — destroying the popular Fosters Trail and slamming incalculable tons of material into the side of the bank along which Cotton Brook Road runs.

The continued activity throughout the summer of 2019 concerned state officials and scientists, who strongly discouraged the general public from exploring the area.

“We were worried that something else big might happen,” Springston said.

The place has mostly settled down enough to walk on, but state officials aren’t encouraging people to explore the slide area.

The slide completely covered up Cotton Brook, a major feeder for the Waterbury Reservoir, forming a new pond upstream from the slide and sending enough sediment into the brook that it resembled Willy Wonka’s chocolate river for most of that summer.

Another natural phenomenon that year, the Halloween storm that flooded areas and flattened trees all over northern Vermont, also helped let loose that upstream pond, which allowed the Cotton Brook to better cut its way back through the clay and mud and debris that formed the “toe” of the landslide.

The result is something that resembles a new canyon — from the edge of the landslide toe down to the river is about 35 feet — with Cotton Brook separating a relatively flat landing pad as thick as a three-story building separated from the steep slope of a naked hillside rife with cracks and gullies, boulders and scree.

Also along for the Aug. 24 site visit was an aerial drone crew from the Vermont Agency of Transportation. Evan Robinson, the agency’s Unmanned Aerial System manager, said the drones scan the entire swath, taking innumerable digital photographs, which will later be stitched together like a mosaic to produce 2D and 3D maps of the area.

State geologist Jon Kim said the VTrans crew has been invaluable in 2019 and 2020 in capturing a comprehensive photographic survey of the slide.

Julia Boyles, a geologist at the Department of Environmental Conservation, said, “This is the slow part of science, analyzing the data.”

Added Springston, “I’m intrigued to see what Evan and his crew find.”

Back to the future

If waiting to get some high-tech drone and GIS data to crunch seems like a long time, how about waiting more than a dozen millennia for something to happen? That might be the case with Cotton Brook.

Springston said the landslide has revealed layers of the earth that offer a glimpse of an ancient past. And the resulting geological history lesson may prove helpful in predicting future events like the 2019 slide.

The Cotton Brook area, and indeed all of Canada, New England and much of the northern tier of the United States, was covered during the Ice Age by a massive slab of ice — as thick as two miles in some parts — known as the Laurentide Ice Sheet.

In Vermont, it completely covered the Green Mountains — really, everything — but toward the end of the epoch, as the ice sheet retreated across the area, it left behind ice-dammed glacial lakes.

The lake covering this area was known as Glacial Lake Winooski and was formed about 13,500-14,000 years ago. This is significant because while geologists often find glacial lake deposits in the bedrock of larger rivers, they don’t often see those deposits at higher elevations. Unless, that is, everything on top slides off.

“I’m wondering why this didn’t break off thousands of years ago,” he said.

That’s one question worth pondering but, meanwhile, the slide may provide other answers. Boyles and Springston said geologists read the landscape differently than the typical jogger, hiker or cyclist, taking in signs like the slope of a hill, the type of soil underfoot, and the presence of nearby bodies of water. Yet, the Cotton Brook slide came as a surprise.

Luckily, it was in a remote area and no one was hurt, but it would be valuable to take lessons from it and apply it to areas closer to human activity. Springston pointed to a landslide that occurred almost 20 years ago in Hardwick, along some S-turns on Route 15 just a few hundred feet outside the village limits. Crews did a great job of repairing the side of that hill, but it was a close call.

“The Cotton Brook landslide was so large and it’s now so well exposed, we can see all the layers and what’s left behind,” Springston said. “We hope it will help us understand other landslides.”

Most natural phenomena aren’t isolated neatly into small, self-contained areas, and Cotton Brook is no exception. As spectacular as the damage is at the site of the slide — where boulders, perilous pine and spruce windowmakers and 30 feet of clay were simply plopped down in a matter of minutes — the effects are felt far downstream.

All that clay and dirt and other soil and sediment has, for the past two years, been swept downstream by the brook, which feeds into the Waterbury Reservoir.

Users of the popular recreational area and hydro-power source quickly noticed it was being practically terraformed by the landslide miles upstream, as a large delta began to form at the mouth of the brook — a popular boating access — where it enters the reservoir.

Keith Klepeis, a geology professor at the University of Vermont, was astounded at how quickly the delta formed. By last summer, it had grown so large that the sand, silt and clay had almost completely cut off the northern edge of the reservoir from the Little River and Cotton Brook.

Klepeis had a term for that landscape-changing event: “From source to sink.”

This year, things changed. When Klepeis and company checked out the delta earlier this summer, they noticed it was starting to recede; the very same waters that deposited the sediment there was now eroding away the delta, breaking it up.

“It had changed significantly since 2020,” Klepeis said. “There’s even vegetation coming back.”

Springston said it comes as a relief that Cotton Brook seems to have adapted to the landslide and is getting back to its normal course, running clearer and even undoing some of the damage it did. Turbid chocolate-colored water is not good for any life form.

“You impact the habitat for the small invertebrates, and you impact the suitability for fish. And if you affect that by filling in the gravel with sediment, that makes it worse,” Springston said.

Again, that sediment must go somewhere, and water and soil from the Cotton Brook landslide has now made its way into Waterbury Reservoir, and Klepeis and Springston said water and soil scientists have even registered sediment as far downstream as the Winooski River. That does not worry them, though. There’s plenty of water along the way to spread things out.

“As huge as the Cotton Brook landslide was,” Springston said, “that individual event was dwarfed by the size of the reservoir.”

The crowds are gone from the Waterbury Center State Park, but a late-spring landslide upstream of the popular Waterbury Reservoir at the center of the remains active.