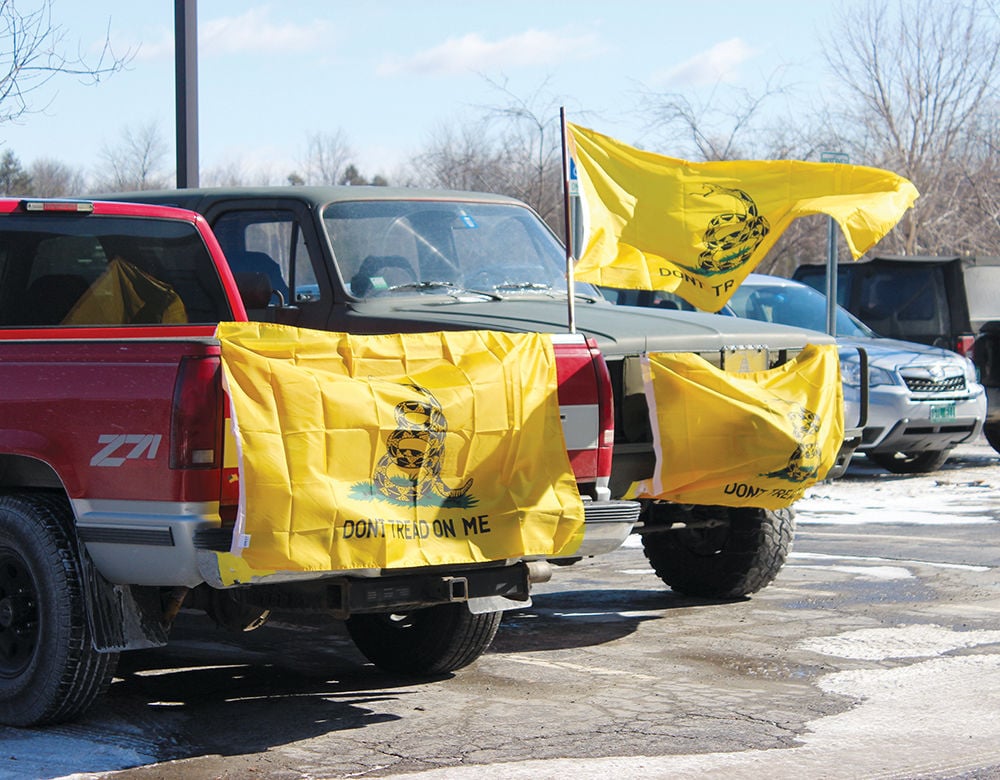 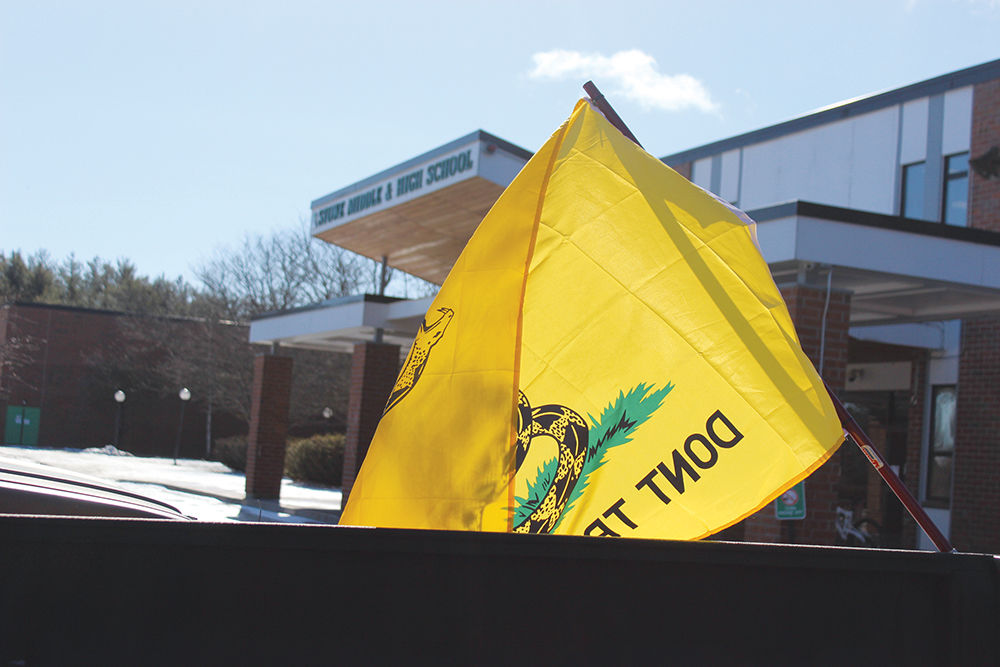 A yellow flag emblazoned with a coiled rattlesnake under the phrase “Don’t tread on me” catches the wind and slowly unfurls from the back of a truck parked in front of Stowe Middle/High School the morning of April 5 — a silent protest of the Vermont Legislature’s passage of new gun control laws.

Another Gadsden Flag adorned the front of that truck and a second vehicle parked right next to it.

Inside the school, the phones wouldn’t stop ringing, as some parents viewed the flag as racist, said history teacher Norm Williams.

One parent said “children who are black or Jewish should not have to walk by that flag on their way into school.”

The Gadsden Flag was created during the American Revolution as a protest to “taxation without representation,” and the use of a rattlesnake has ties to a satirical commentary by Benjamin Franklin. Great Britain used to send convicted criminals to the Americas, so Franklin suggested that the colonies thank the British by sending rattlesnakes — native to America — to England.

By the 1970s, it had some traction in Libertarian circles, favoring minimal government involvement in the daily lives of Americans.

The flag was flown by the Tea Party movement, which was affiliated with conservative Republicans in 2010.

In recent years, it has been co-opted by white supremacist groups, laid on the bodies of two Las Vegas police officers who were shot.

In Stowe, “the boys who flew the flag are not Tea Party affiliates, and they were trying to be tremendously respectful (in their protest). I think they were surprised by the reaction they got,” Williams said.

Williams teaches both boys, who were asked by school administrators to take the flags off their trucks. By midday, they had done so.

The two students hold a minority opinion in Stowe when it comes to gun rights, and thought their rights had been trampled on during the recent school walkout in support of gun control laws. They just wanted to speak out in a quiet way, Williams said.

“I have them both in my class, and they didn’t say anything to me about the flags, nor did I to them,” Williams said.

“The students were trying to find ways to engage in a way that was productive and democratic, but they did not understand the connotation that the flag might have for others,” said school Superintendent Tracy Wrend. “In no shape or form do we think the kids were trying to convey a view in support of anything other than the Second Amendment.”

The two students were unavailable for comment before press time.

After the students were asked to take down the flags, a petition circulated through the school in support of allowing them to express their views.

“We, the students of Stowe High School, believe that the two students who peacefully protested the recently amended gun laws in Vermont deserve to have their voice heard at an equal volume to those who expressed themselves during a walkout last month. By silencing one side of the gun control argument, our school has taken a clear political stance,” the petition read.

The petition goes on to say that by calling the school and demanding the removal of the flags, some parents “encouraged the students of Stowe High to ignore and neglect the arguments” of people with opposing views, creating deeper divides in both the school and the community.

The flag, according to the student petitioners, is a symbol of protest to government overreach and is not a Nazi salute or Ku Klux Klan-affiliated.

“Just because the alt-right uses it does not mean that it is racist or an intolerant symbol,” the petition states.

The students dismiss its use by white supremacists, stating that the Gadsden Flag as a symbol of government overstep is “not shaken off by the few extremists that use it.”

The petition “was signed by students at SHS as we stood by our two classmates who hung the Gadsden flag on their cars,” said Alex Pelletier, a Stowe High junior. “My classmates and I collected these signatures in one school day.”

The petition was filled with 65 names and signatures of students in grades nine through 12 — 25 percent of the student body.

“I am really proud of the way students are handling this with such maturity,” Williams said.

In response, the high school principal, Chris Oleks — who did not want to comment for print — is working with the administration to provide student gun-rights advocates the same opportunities to speak as the students who walked out last month without stepping on anyone else’s rights.

See more on the community’s perception of this incident in the opinion section.