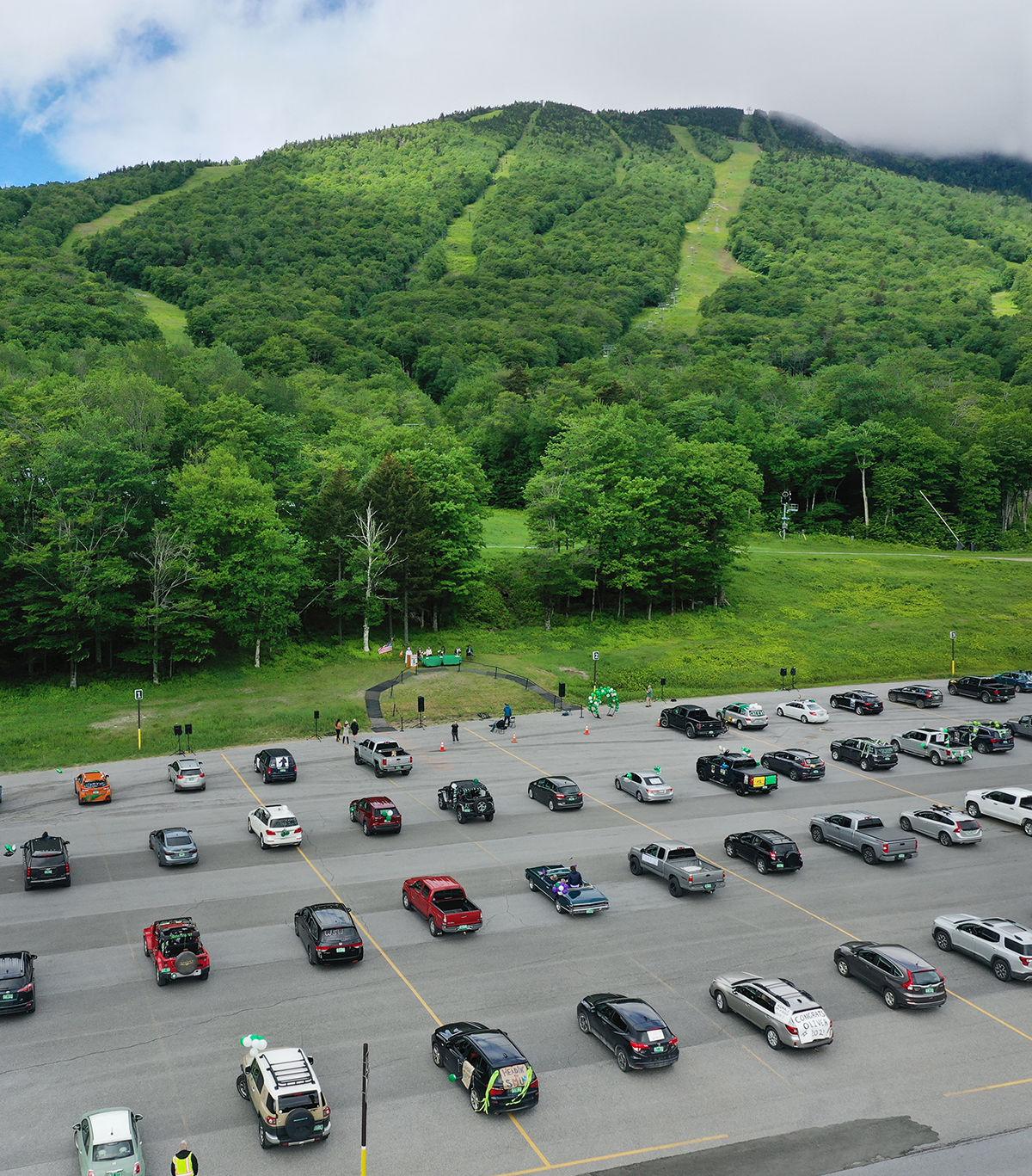 A drone photo shows the Stowe High School graduation’s parking-lot formation is much like a drive-in movie, except that instead of a screen, there’s a 4,393-foot mountain. 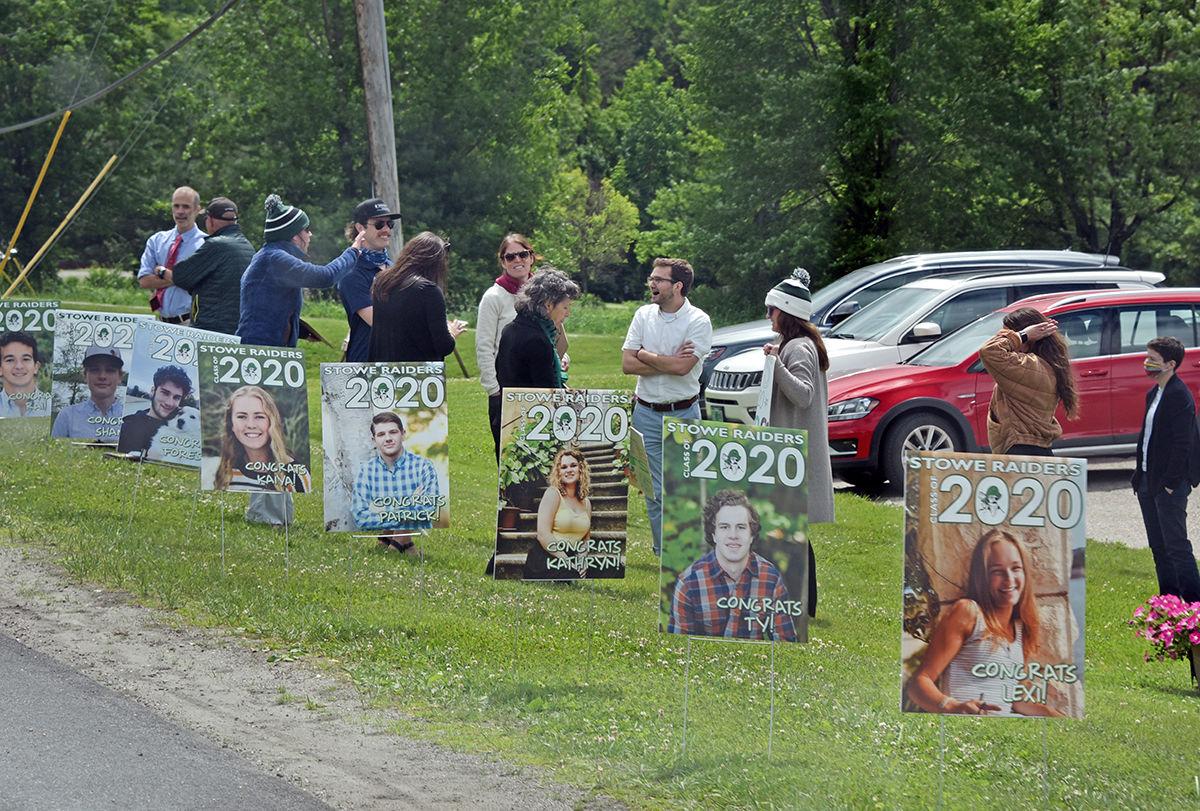 Teachers wait by class-members’ photo-signs to wish them well after commencement. 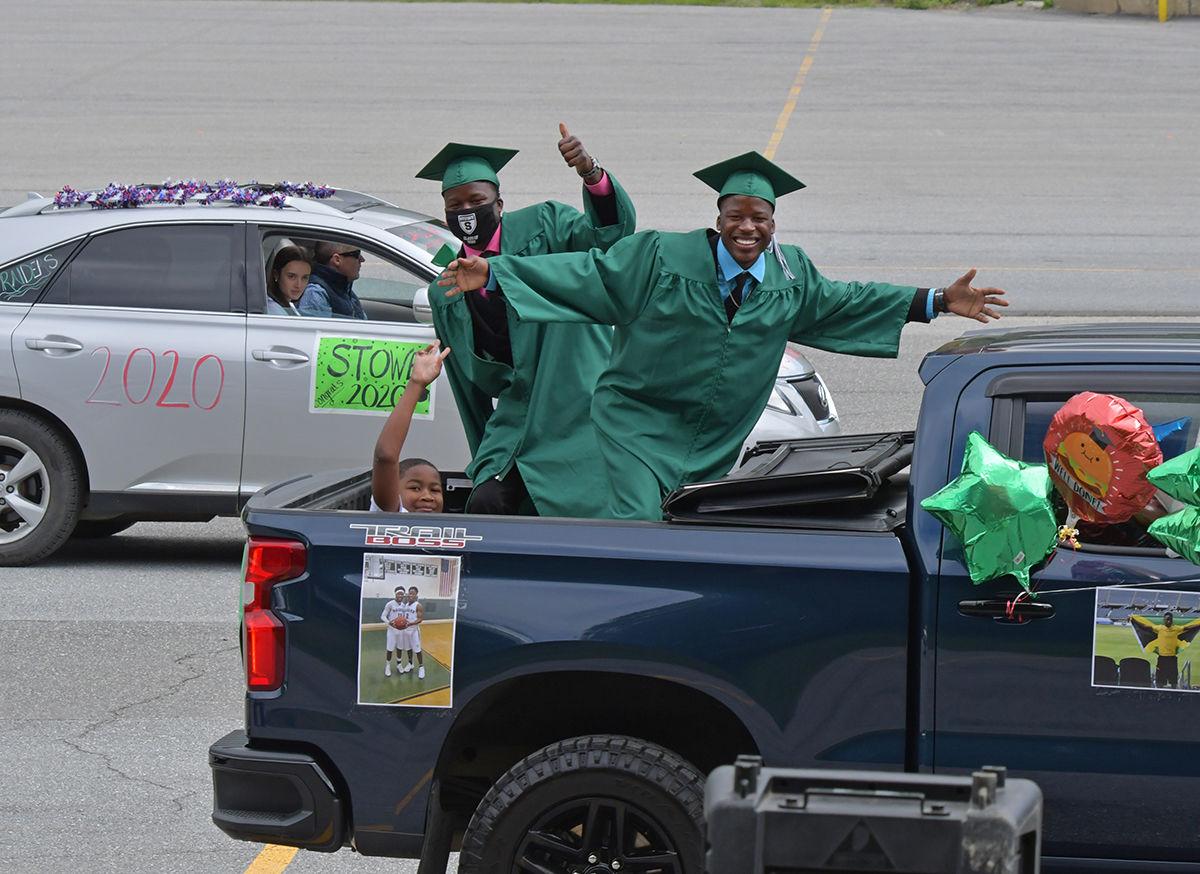 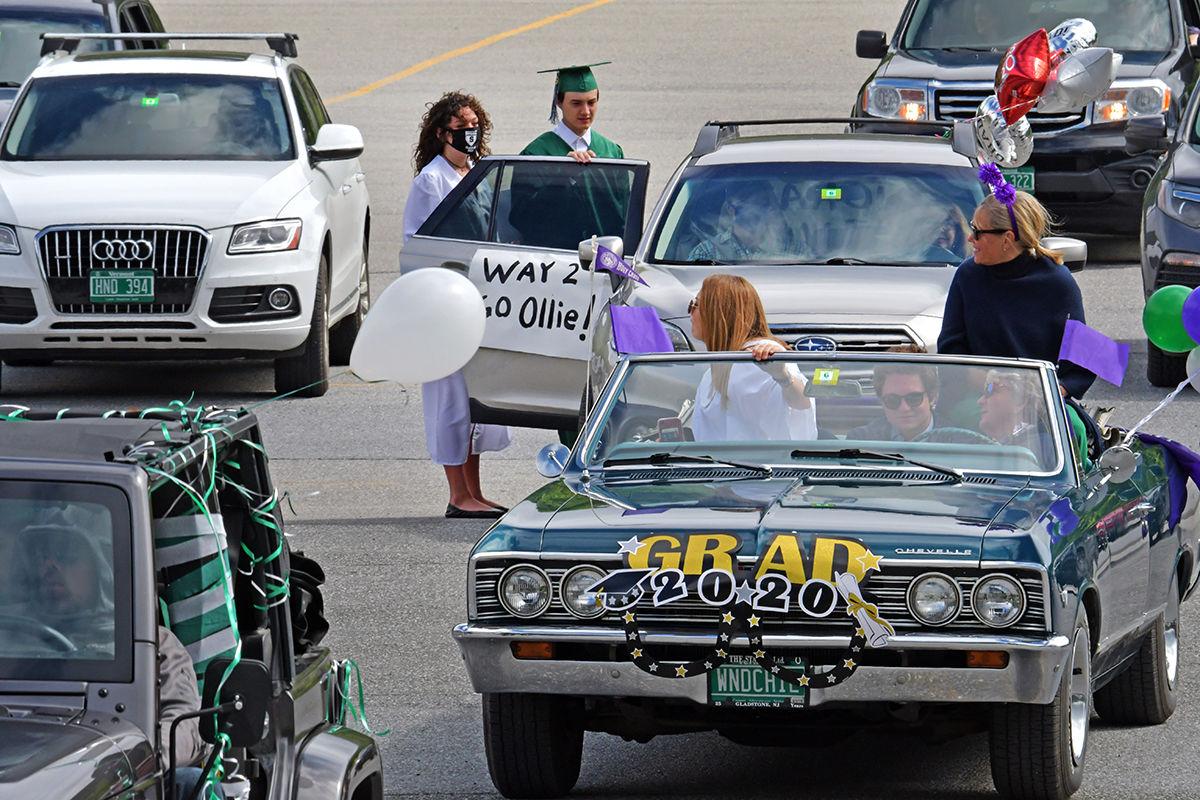 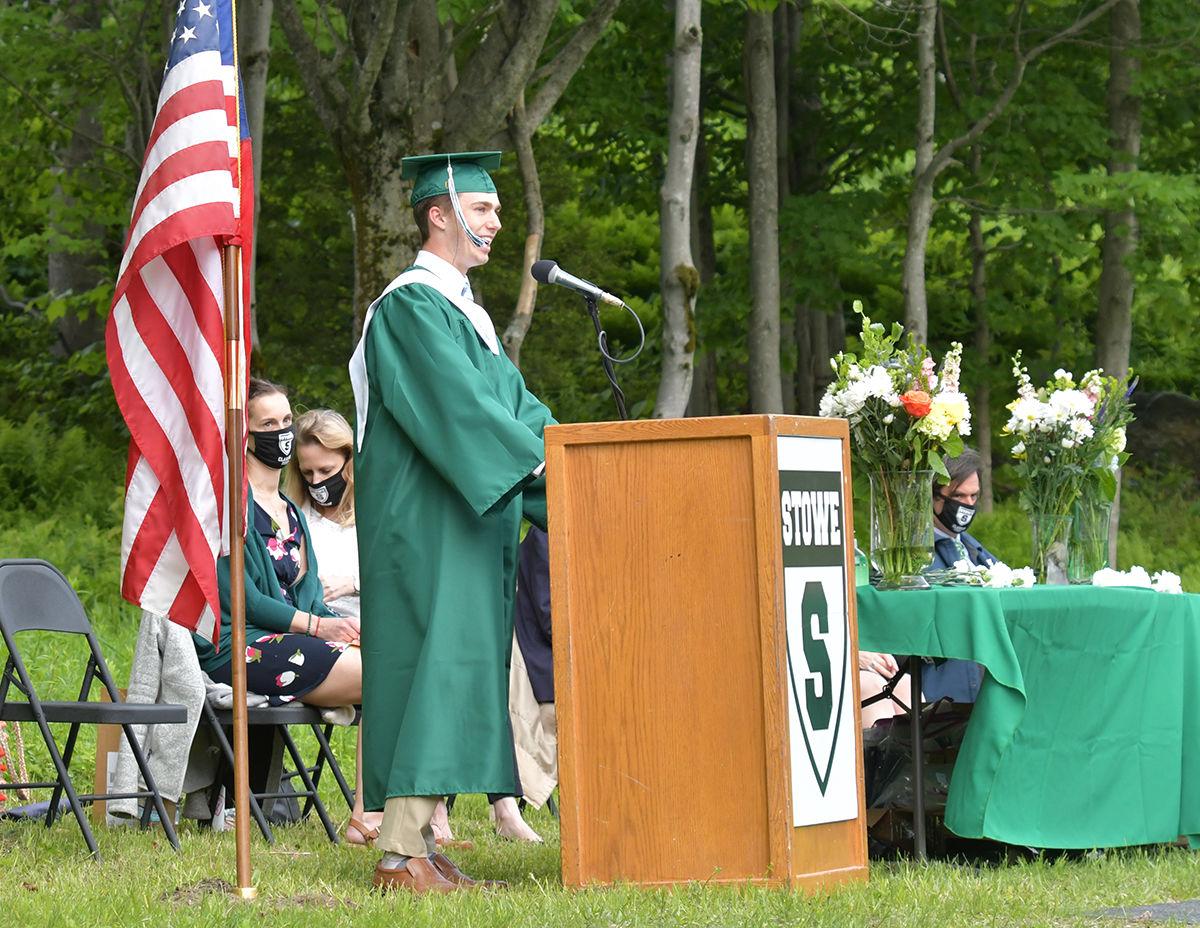 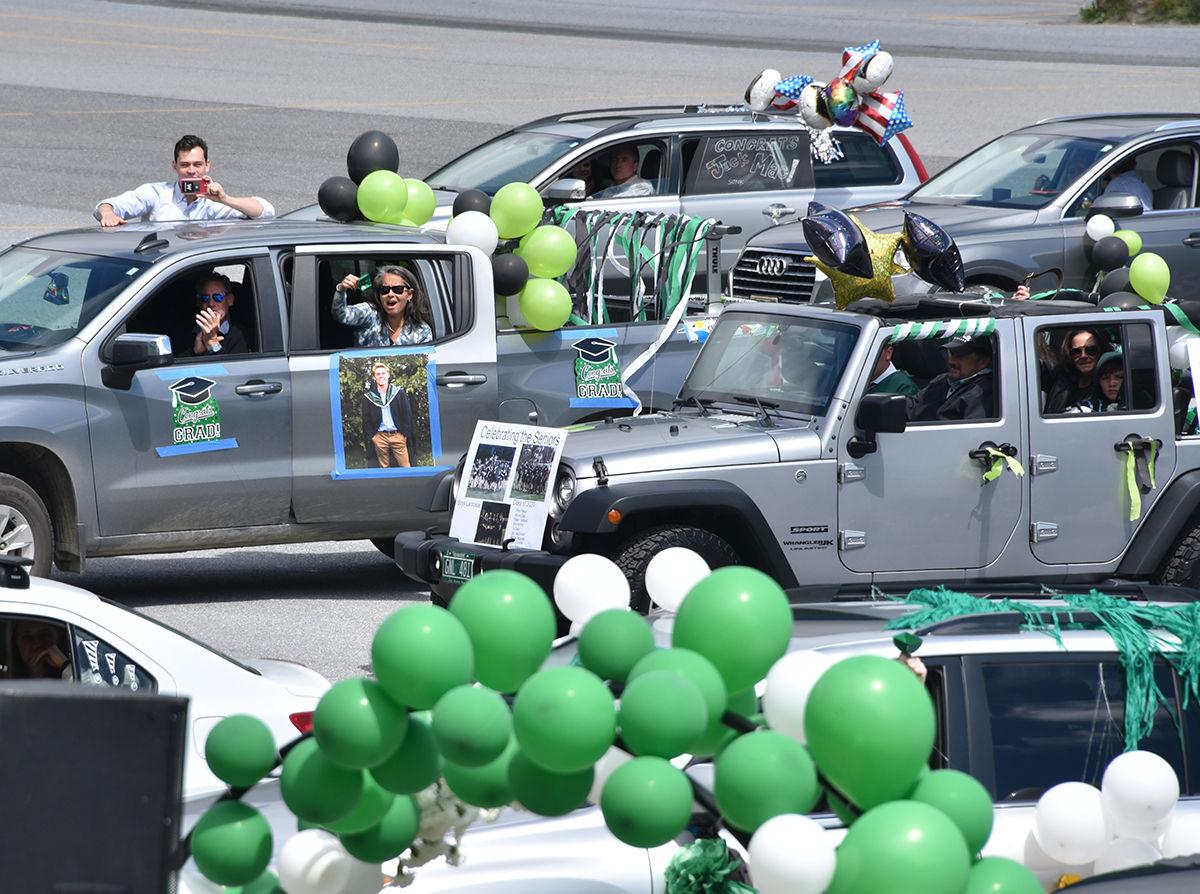 The Stowe High School parking-lot graduation had a party atmosphere, but with social distancing and 6 feet of separation. 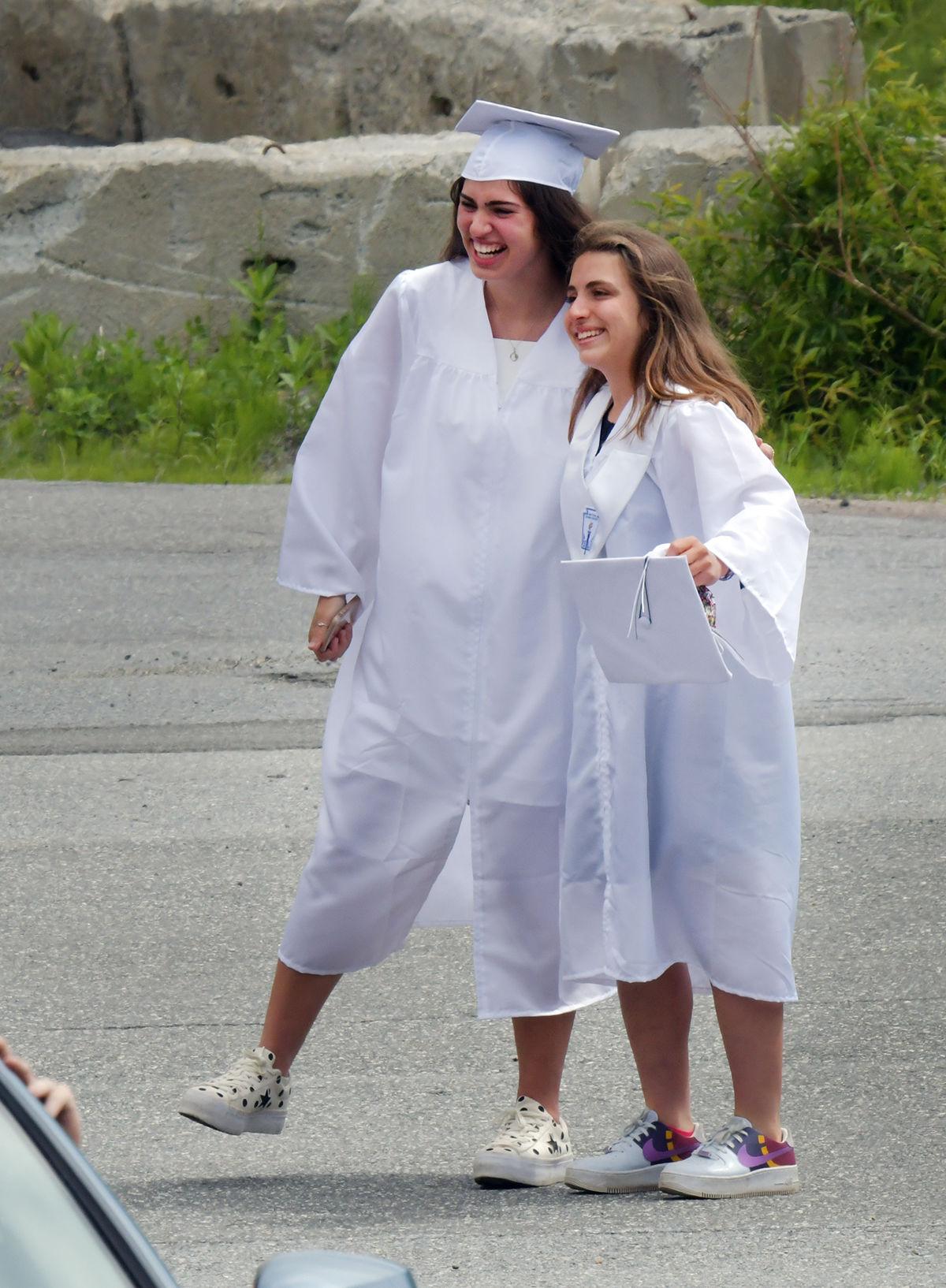 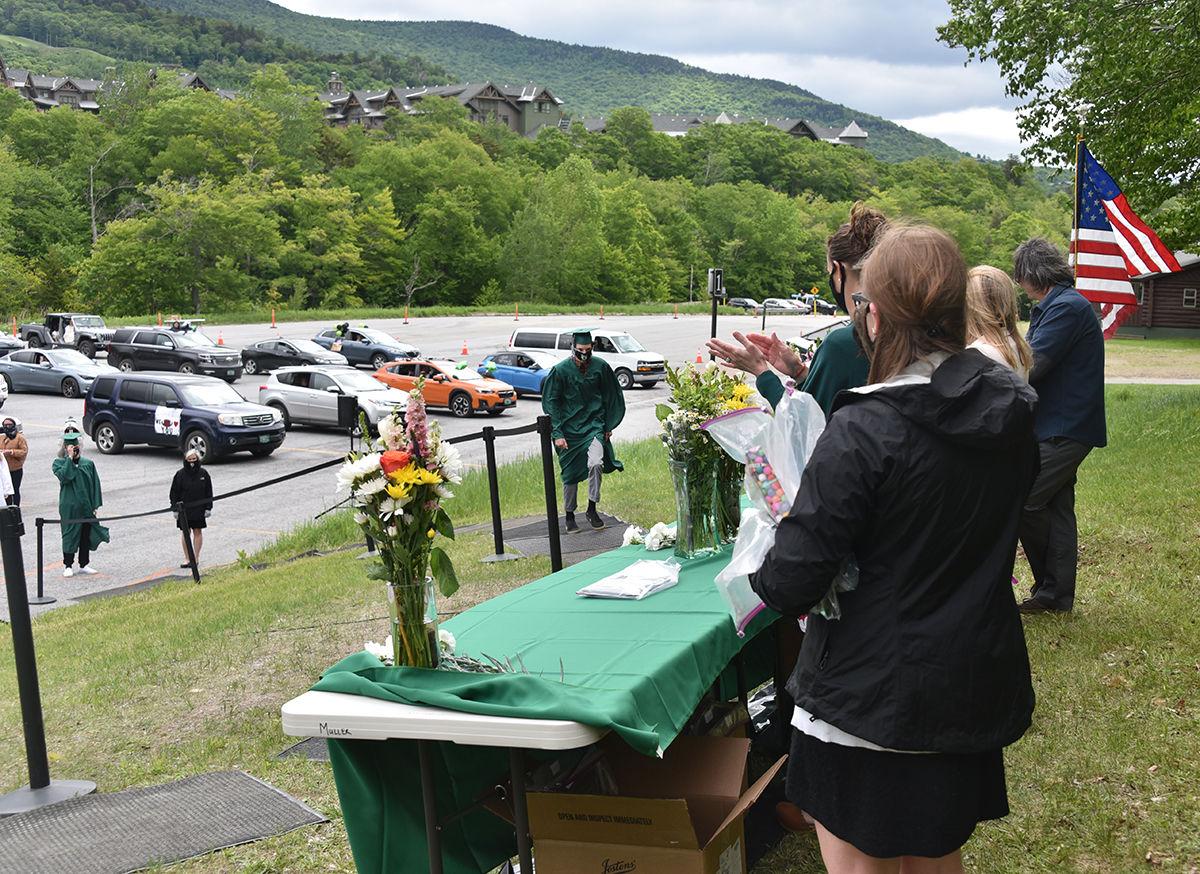 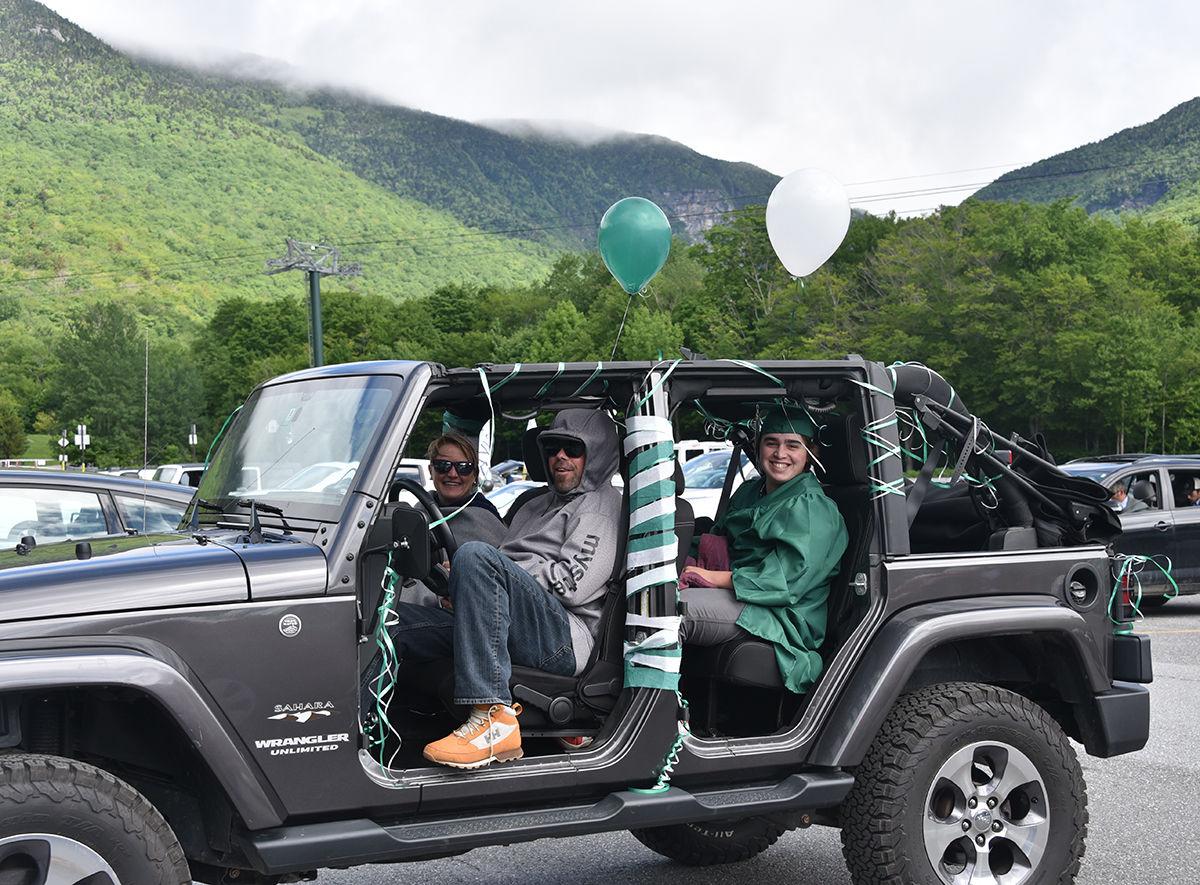 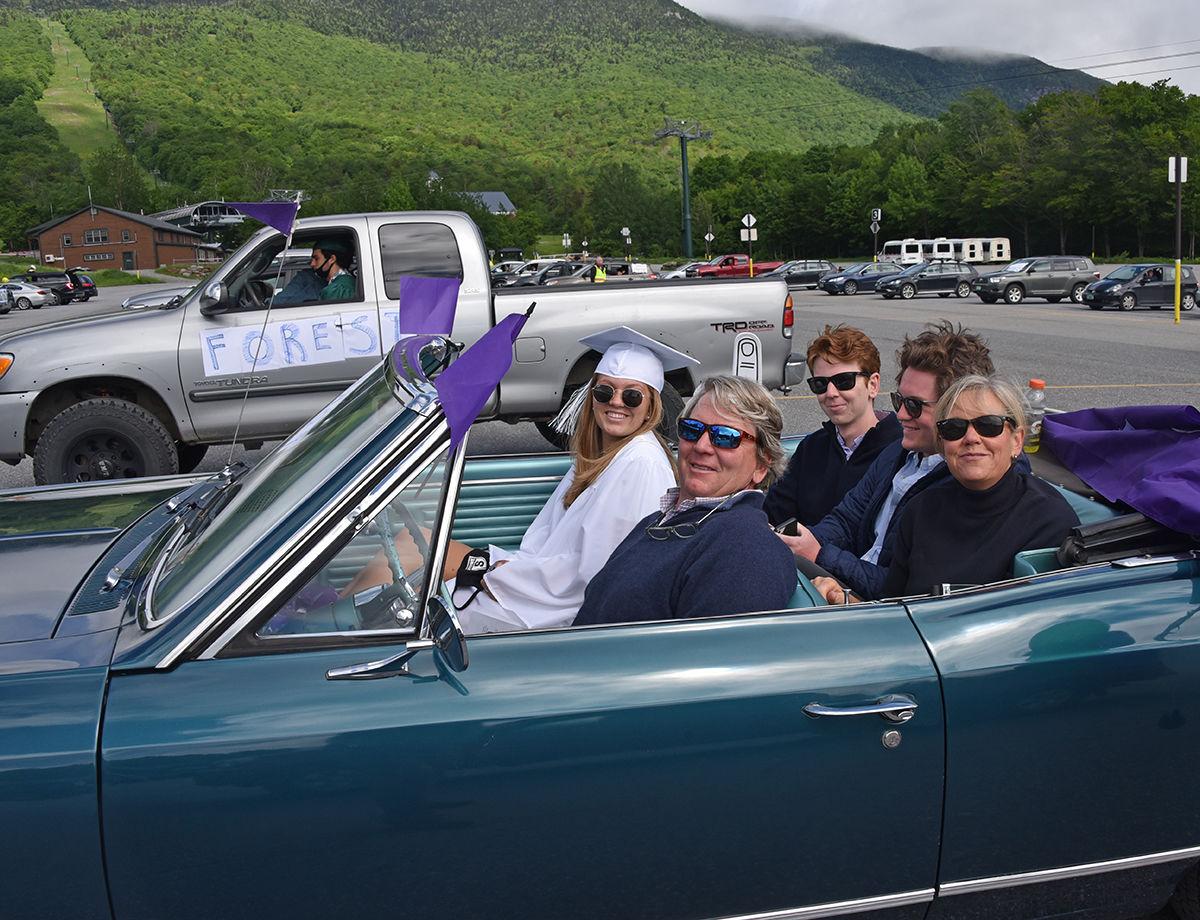 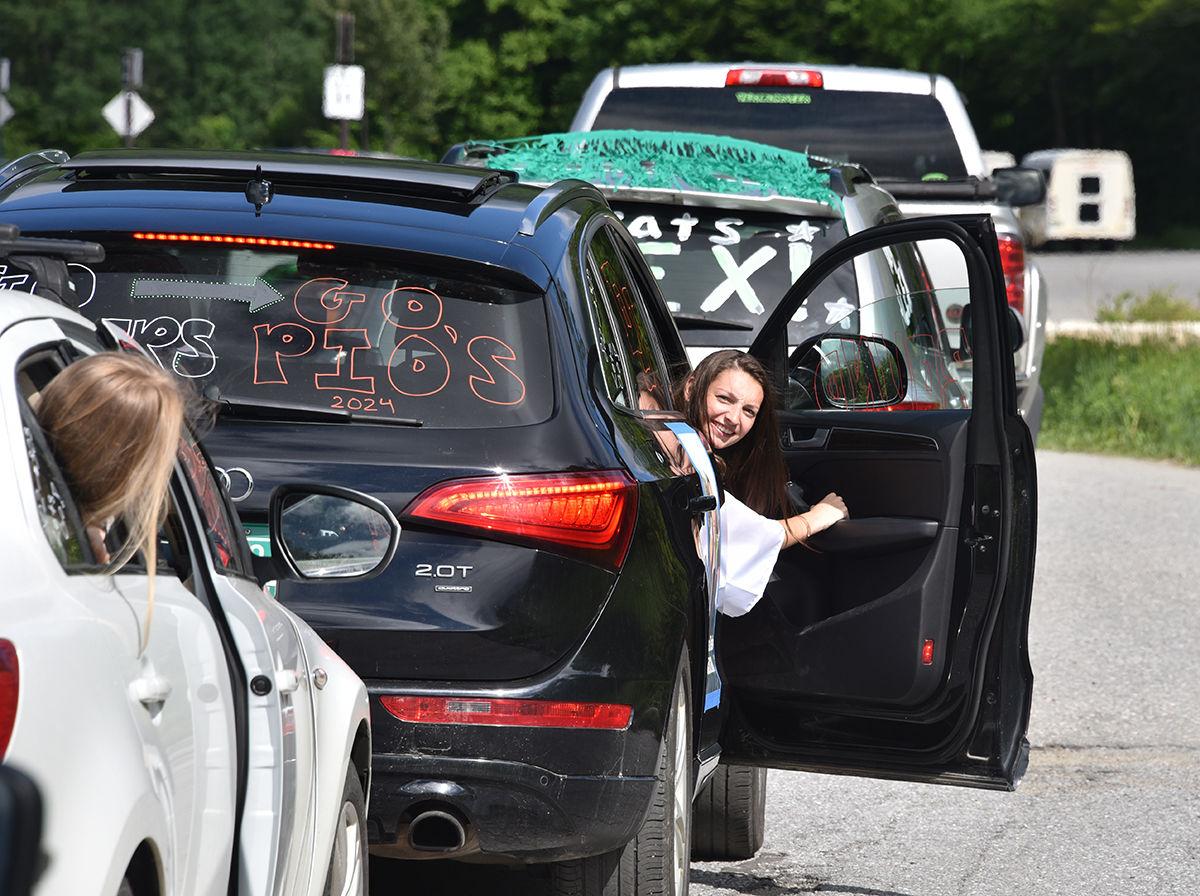 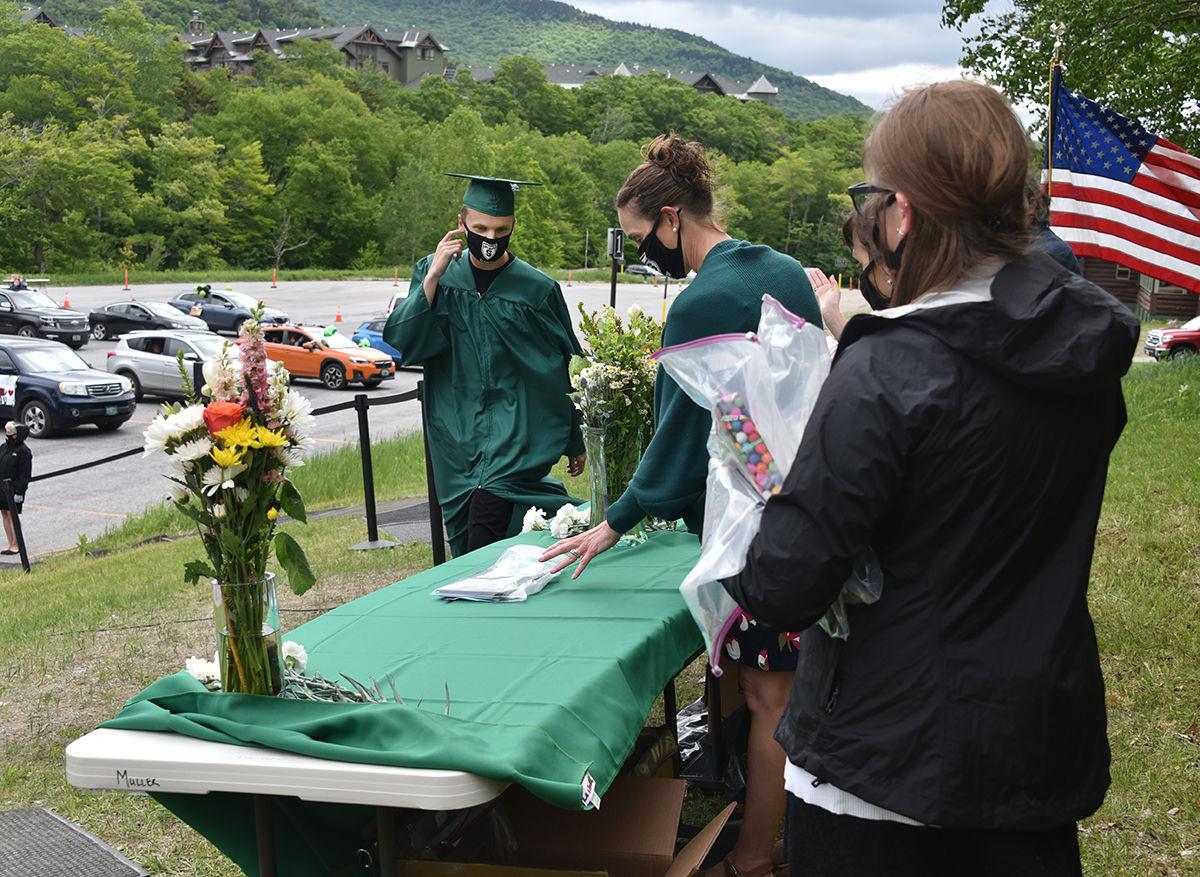 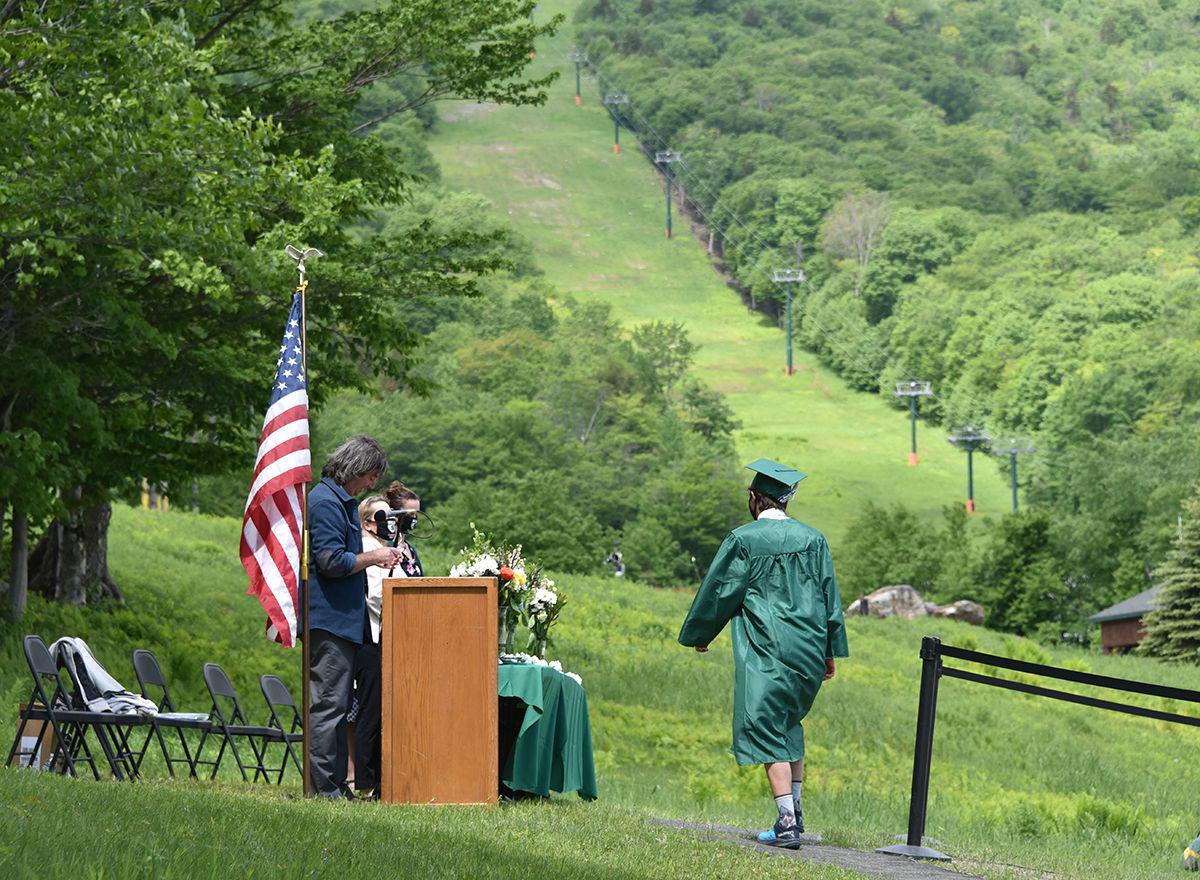 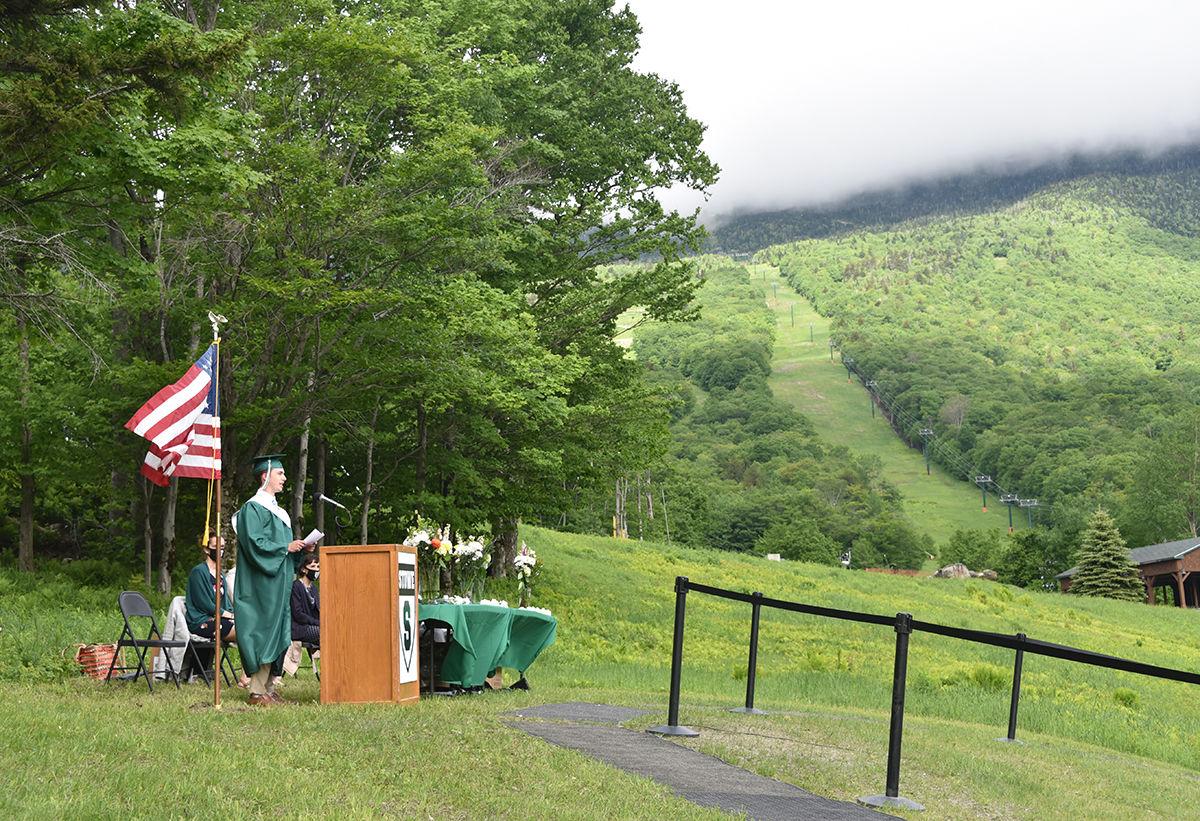 A drone photo shows the Stowe High School graduation’s parking-lot formation is much like a drive-in movie, except that instead of a screen, there’s a 4,393-foot mountain.

Teachers wait by class-members’ photo-signs to wish them well after commencement.

The Stowe High School parking-lot graduation had a party atmosphere, but with social distancing and 6 feet of separation.

The hills were alive Saturday with the sound of cowbells.

On a blustery cold June day at the base of Vermont’s highest peak, 64 Stowe High School seniors, one by one, made their way to a makeshift dais and received their diplomas. They were cheered on by a chorus of honking cars and trucks parked several feet apart as if they were at a drive-in movie.

The event was held at Stowe Mountain Resort, and graduates and their families received Raider green cowbells to accompany their car horns. Class president Max McKenna, at one point in his speech, called for “a round of cowbells.”

The first three laps of the race are going great, good pace, still plenty left in the tank. But then suddenly, in the last quarter-mile, someone places the hurdles willy-nilly onto the track, and someone else re-directs the throwing events so javelins, discuses and 12-pound shot are raining down on you. And the spectators have all disappeared and everyone in the race is spaced out at least 6 feet apart so you have no idea what kind of time you’ll post when you get to the finish line.

The Stowe High graduates made it to the finish line Saturday, capping the oddest school year in memory, when the global coronavirus forced students and teachers to complete the final three months of the school year quickly adapting to a remote learning environment.

In a fairly quick ceremony, the three student speakers and the principal all referred to COVID-19 and its effects on the school year.

McKenna noted that just graduating during a pandemic doesn’t make a class special; what’s special is the perseverance his classmates show.

Principal Gretchen Muller ticked off a list of traditional senior year activities that had to be sacrificed — concerts, prom, class trips, sporting events.

“The things you missed have shaped you into tougher individuals,” Muller said. She said that toughness will come in handy, because their generation will be called to step up and lead.

Valedictorian Andrea Jackman and salutatorian Bjorn Westervelt didn’t stop with coronavirus as a challenge the class of 2020 has faced over the years.

Jackman cited the “radical new grading system” known as proficiency-based learning, and the departure of the school’s principal before the end of last school year. Westervelt went even further, noting the class has had three principals in four years of high school.

McKenna summed it up: “It is nothing short of remarkable, what we’ve accomplished.”

Stowe High School’s 2020 commencement exercises will be available on the school’s website in the near future: bit.ly/stoweschools2020grad

The school also did its awards ceremony remotely, and that is already available for viewing: bit.ly/stowehigh2020

Graduation: A salute to the Stowe High School class of 2020

Congratulations to the Stowe High School class of 2020, who on Saturday will be part of a graduation ceremony that seems much like a drive-in movie, made necessary by the coronavirus.