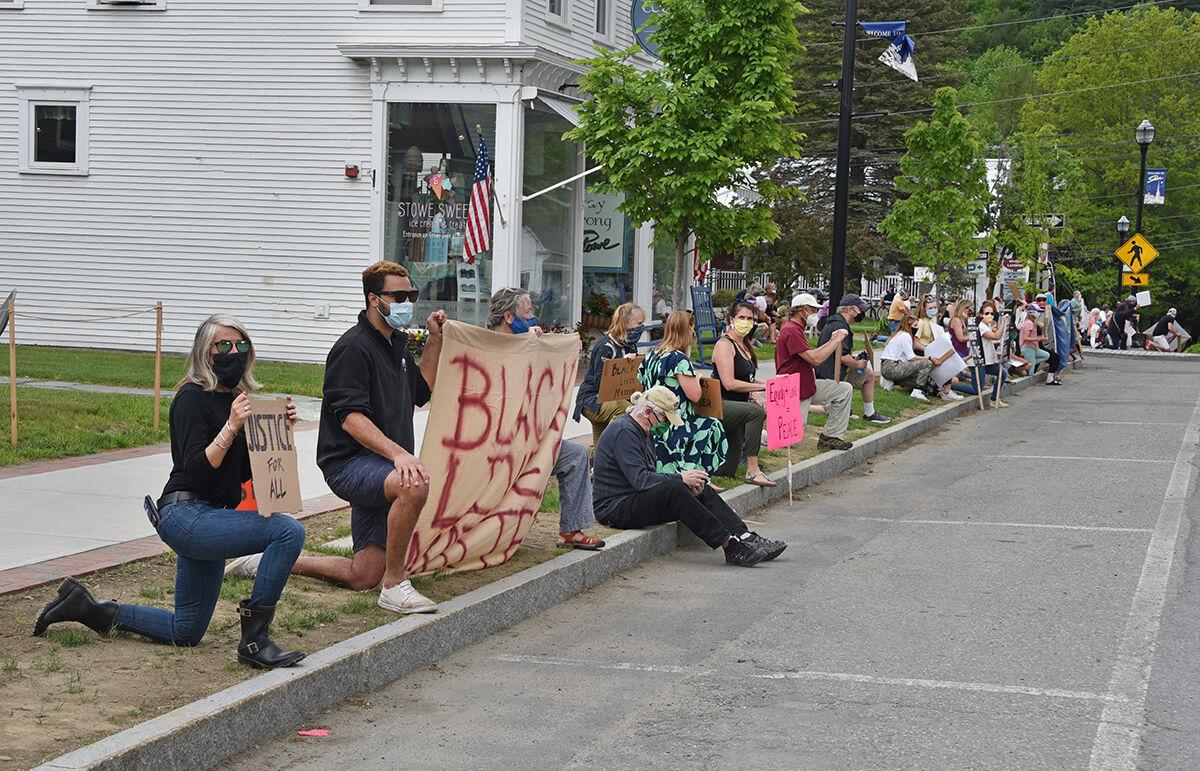 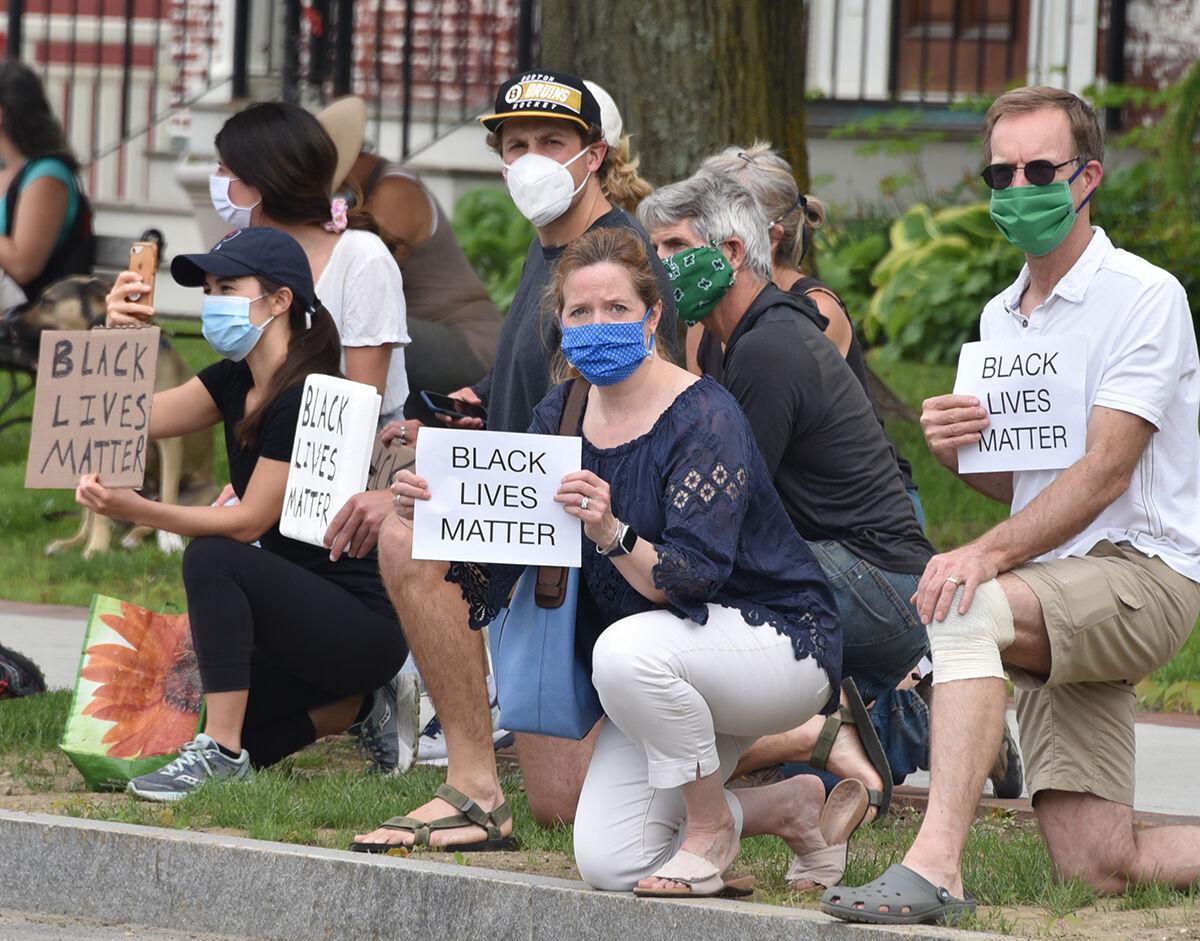 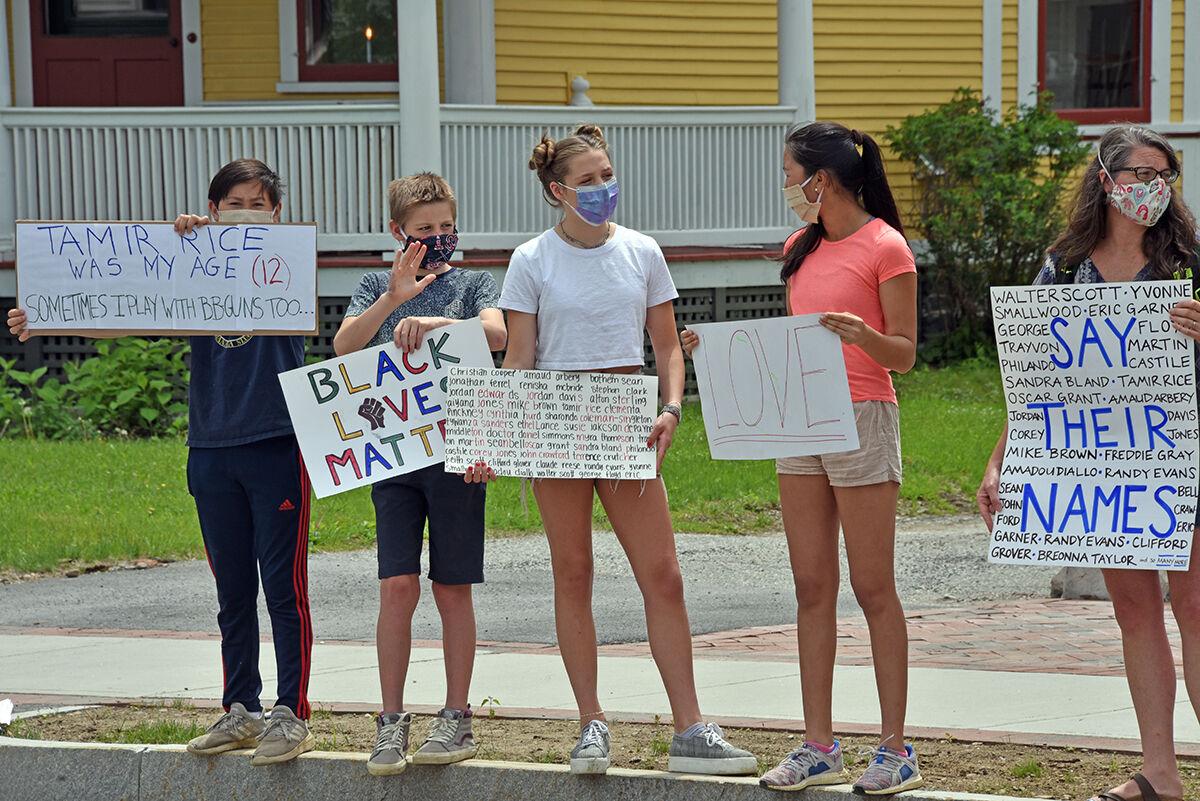 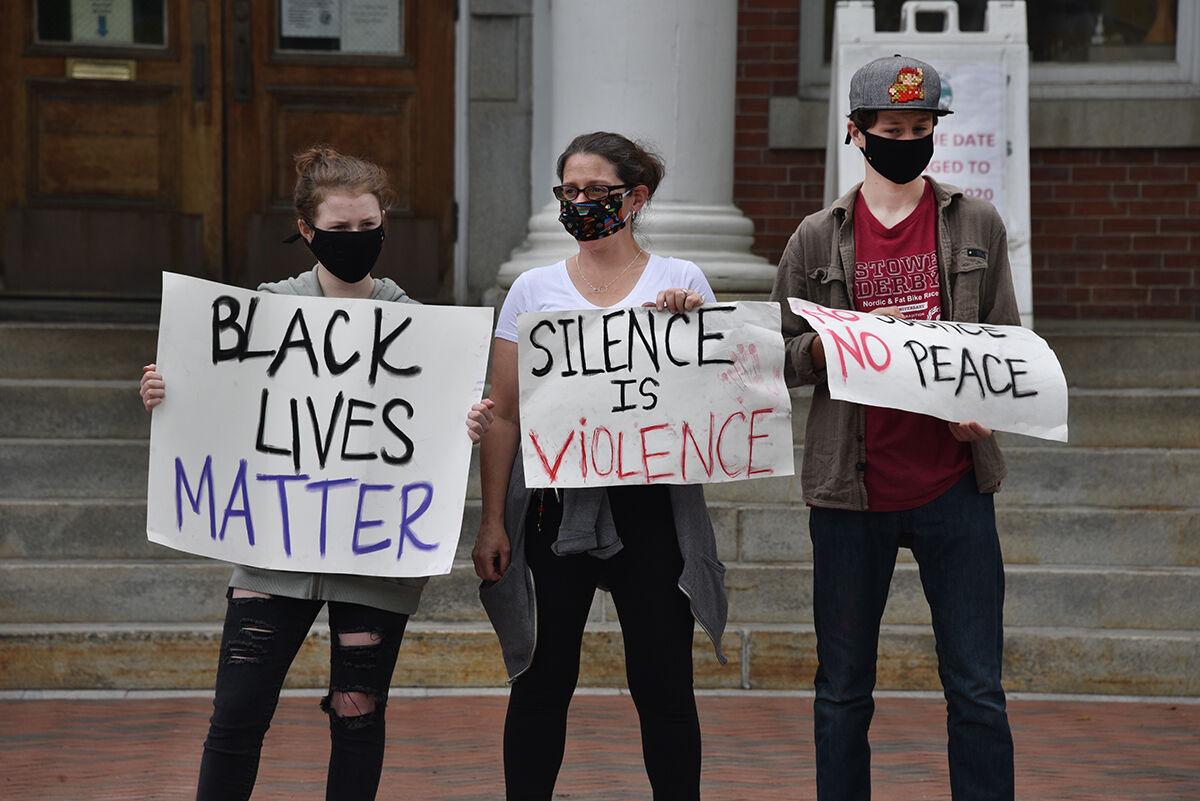 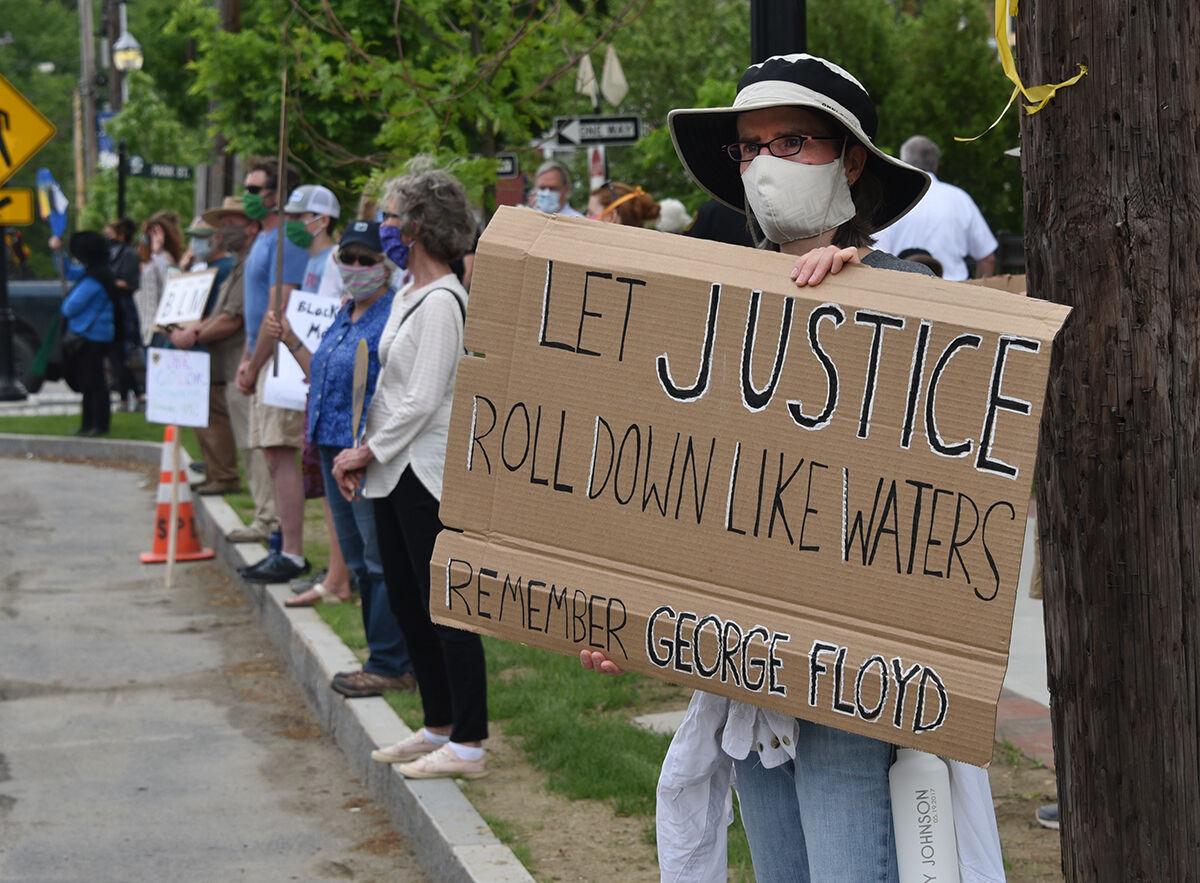 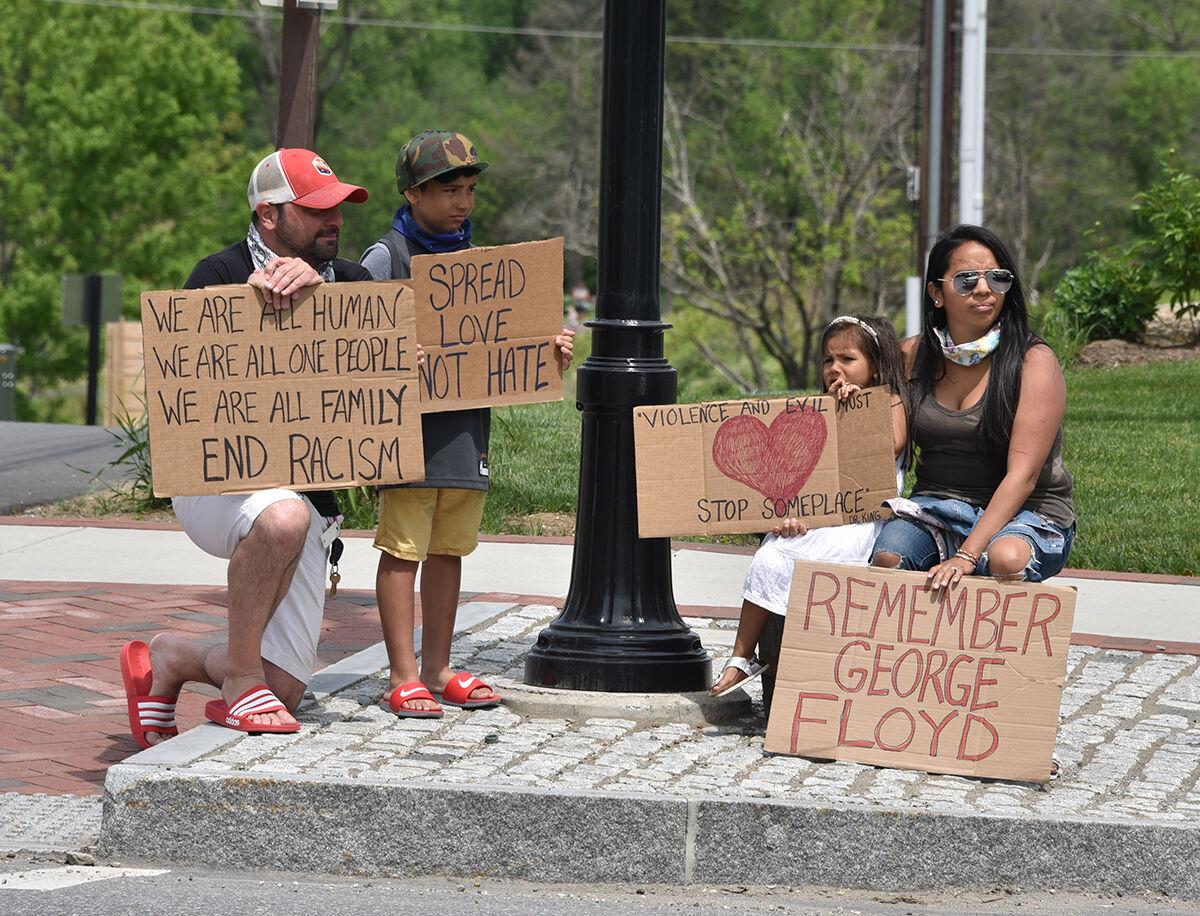 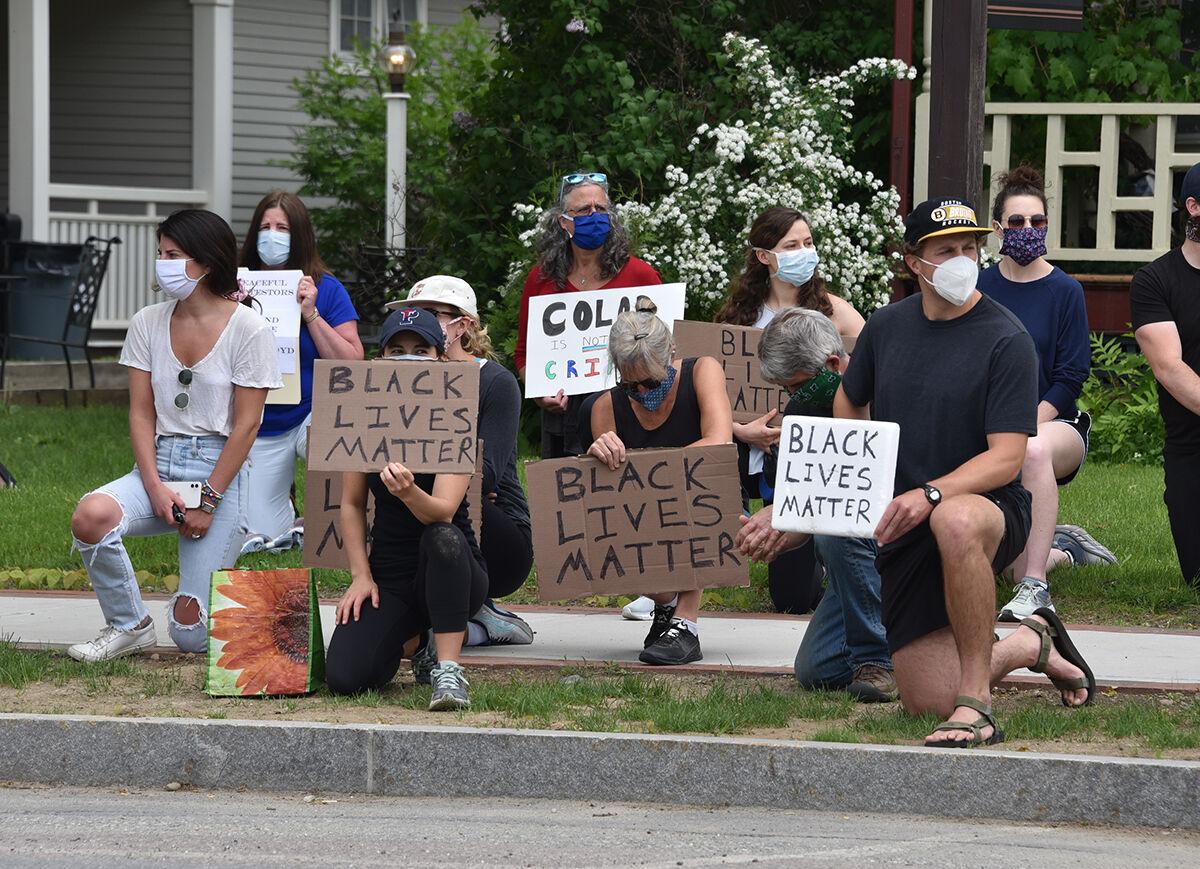 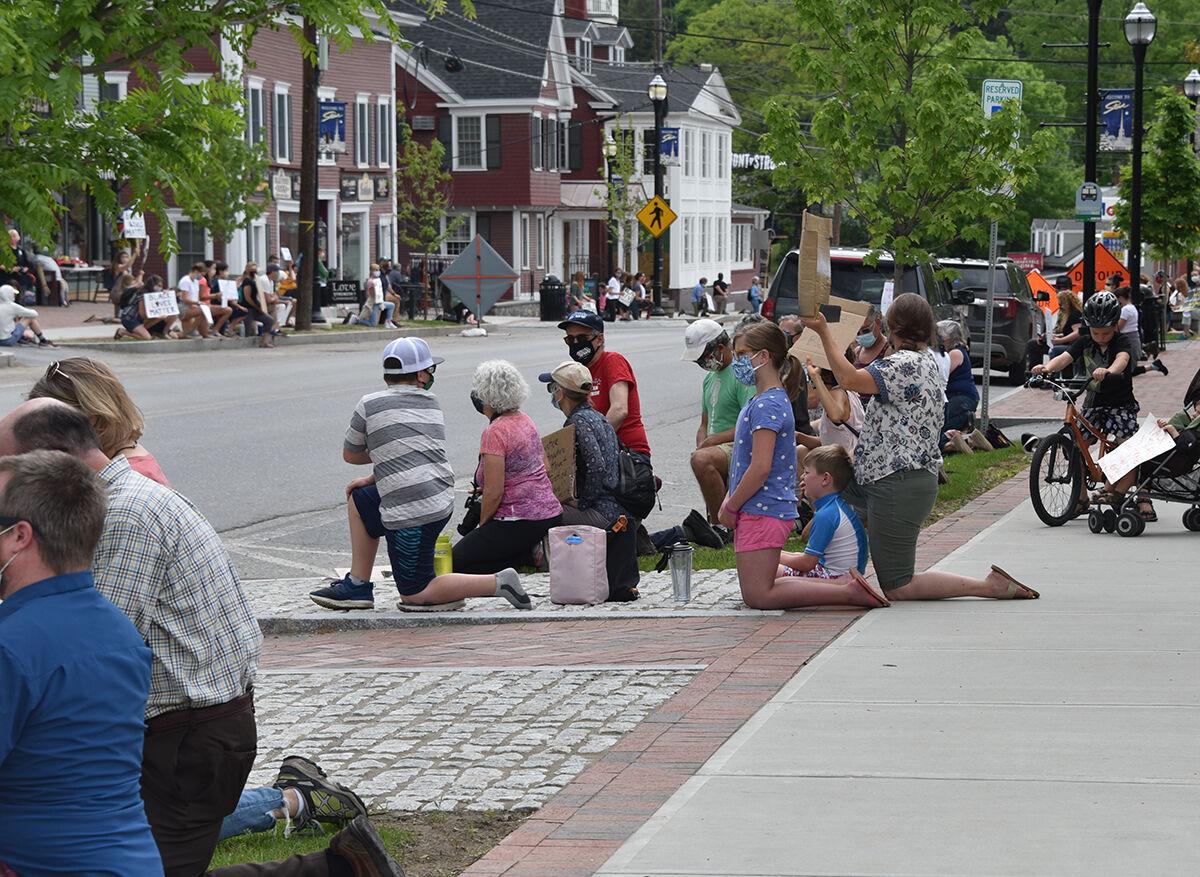 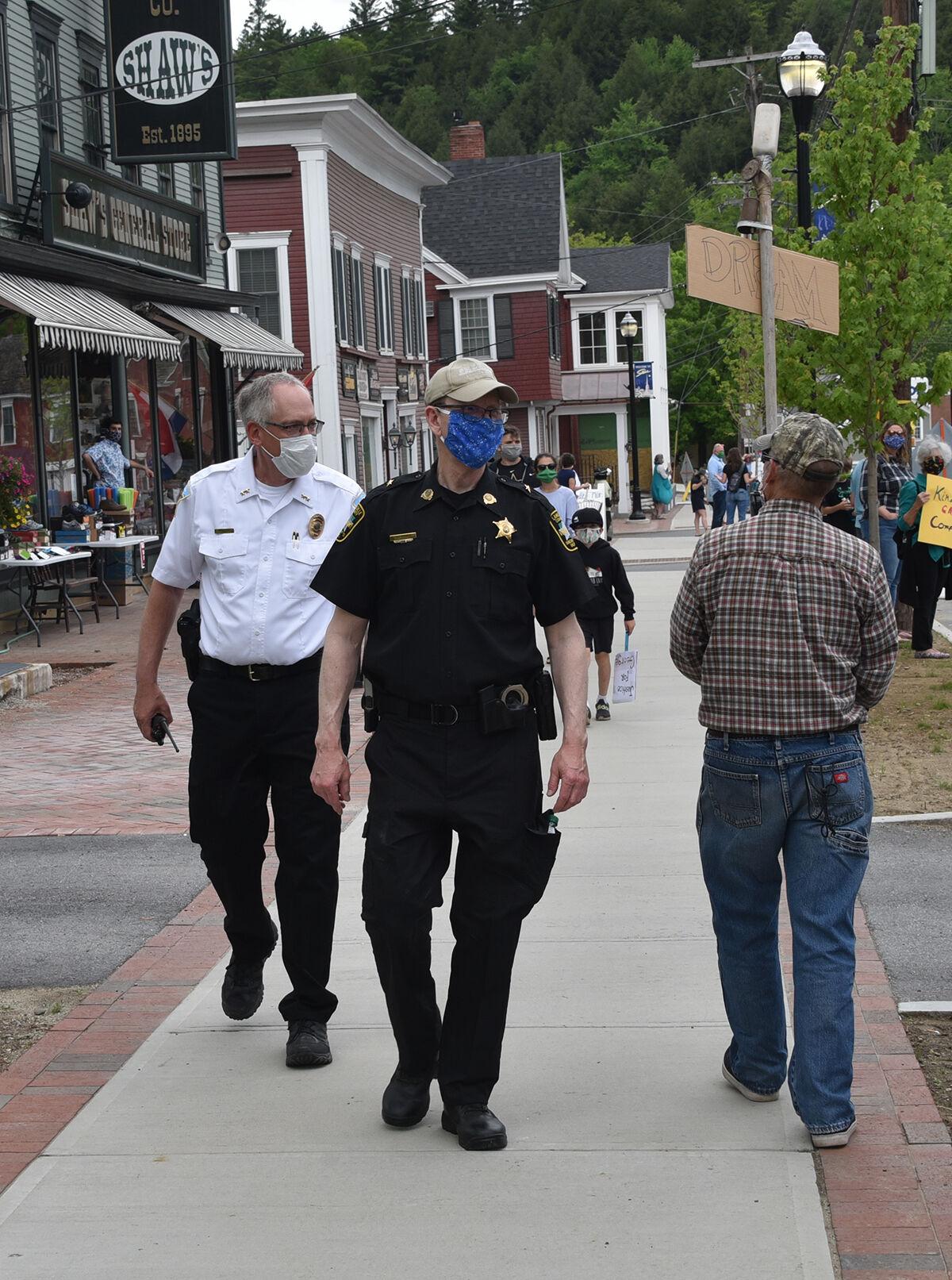 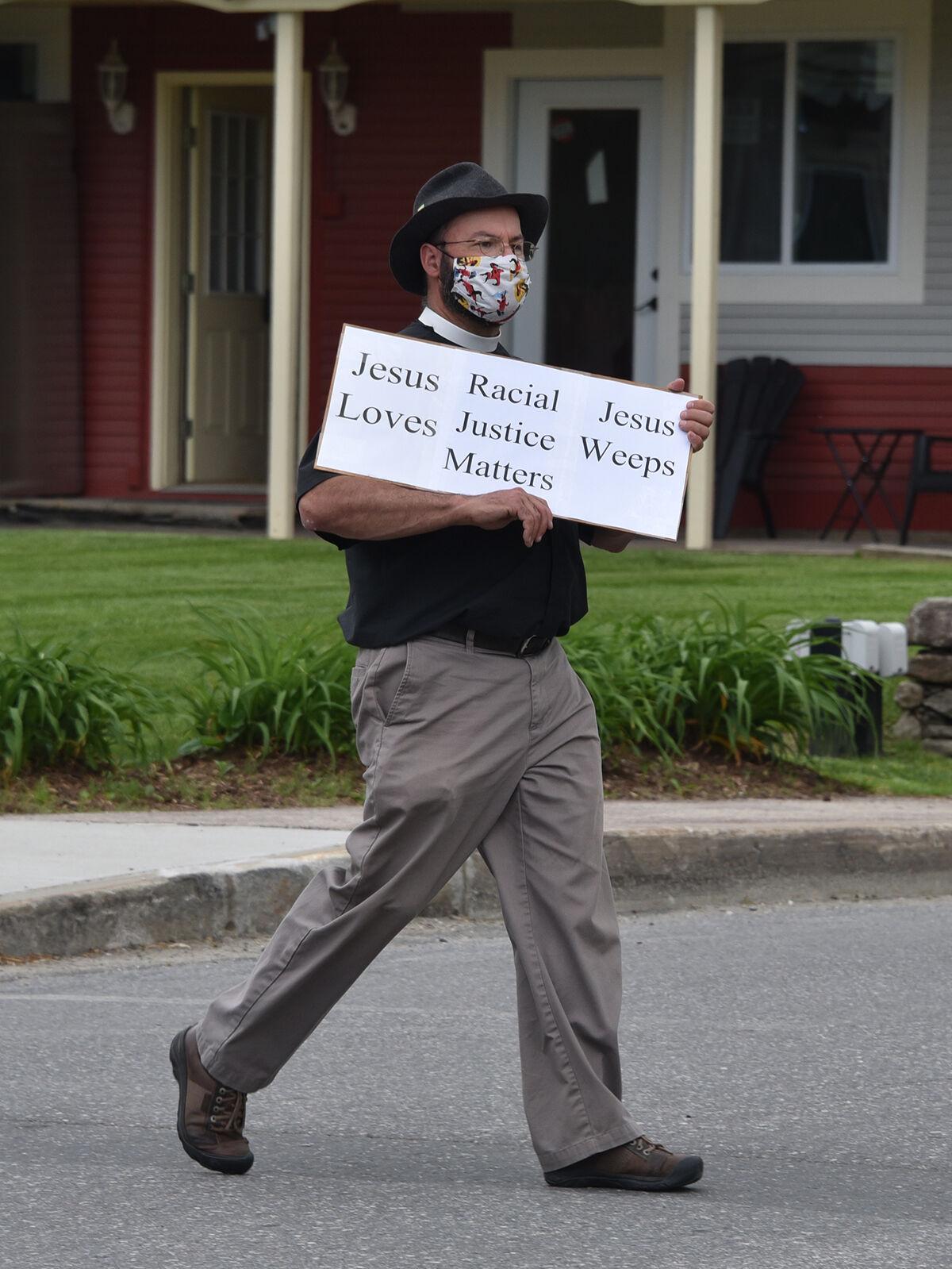 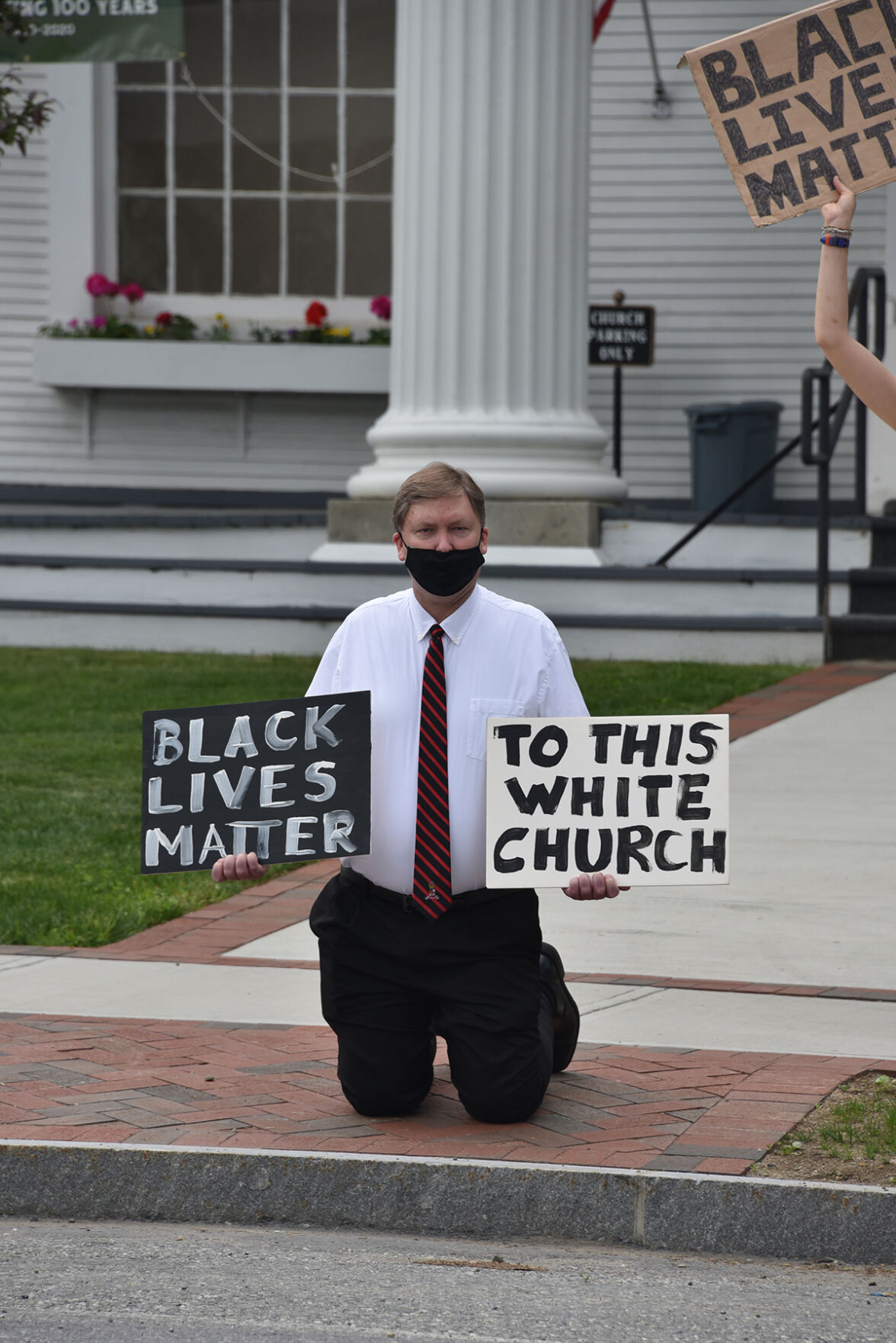 More than 200 people lined Stowe’s Main Street last Thursday for a Vigil for Racial Justice, part of the national reaction to George Floyd’s killing by a Minneapolis police officer.

Floyd was killed by Officer Derek Chauvin on May 25. Responding to a report of a counterfeit $20 bill, Chauvin pressed his knee into Floyd’s neck for 8 minutes and 46 seconds, killing the handcuffed man as three other officers watched and Floyd wheezed, “I can’t breathe.”

Chauvin has been fired and charged with second-degree murder and manslaughter. The other officers were also fired and are charged with aiding and abetting the crime.

The Vigil for Racial Justice was organized by the Rev. Rick Swanson of St. John’s in the Mountains Episcopal Church in Stowe. Swanson circulated an email just before noon the day before, asking people to gather the next day — in a respectful manner, with no divisive signs, raucous chants or marching — and to bring their friends.

Families, friends, couples and individuals lined the Main Street sidewalk. Some held signs; others were simply present. Some expressed outrage and thoughts about Floyd’s killing and state of policing in the country. Other people talked quietly to those next to them, but returned their eyes to the street as cars passed, with many honking in support.

Then it went silent.

At 12:30, the entire crowd took a knee for eight minutes and 46 seconds — the length of time Chauvin had his knee on Floyd’s neck. The low rumble of conversation ceased immediately. Only the ambient noise of Stowe was left — birds chirping and the occasional car passing, driving more slowly than those before it.

There was a palpable sentiment in the air that held an inexplicable weight. People bowed their heads.

Swanson’s head was bowed from the start, his hat on the ground beside him, his hand clasping his forehead.

He was overwhelmed by the attendance at the vigil, organized on a day’s notice. He was happy to see support for the cause. “No matter how small the step, it’s worth it,” Swanson said.

Voices in the crowd

Jayson and Mily Willette brought their two children, Lucca, 9, and Ari, 4, to the vigil.

“The whole theory ‘silence is violence’… I want to teach (Lucca) to speak up,” Jayson said. “His best friend is African American.”

Don Hull, the Stowe police chief, and Roger Marcoux, Lamoille County sheriff, were there too. They and the Morristown police chief, Richard Keith, had issued a joint statement condemning the police conduct in the Floyd case.

“It was good community support, and it was great to be here to show support,” Hull said.

Marcoux said it was good to see the community show support in a peaceful way, and people here know the difference between police forces in small Vermont communities and those in heavily populated areas.

“We feel angry and disappointed,” said Emma Hinkson, a Stowe High School graduate and current Cornell University student. “In the coronavirus pandemic, we couldn’t get masks, but now we can afford tear gas.”

“I would support defunding the police,” she said, suggesting mental health professionals or social workers be dispatched to many of the situations police deal with now.

“As white girls, we’re not a target,” said Alina Chmura, a senior at Stowe High School. “We have to use our privilege to their advantage.”

“It’s really important for everyone out here to to use their voice, and be silent for those that need to be heard,” she said. She wiped a tear from her eye. “We should have started this kind of thing a lot earlier.”

Sheriff, local chiefs ‘outraged’ by the death of George Floyd