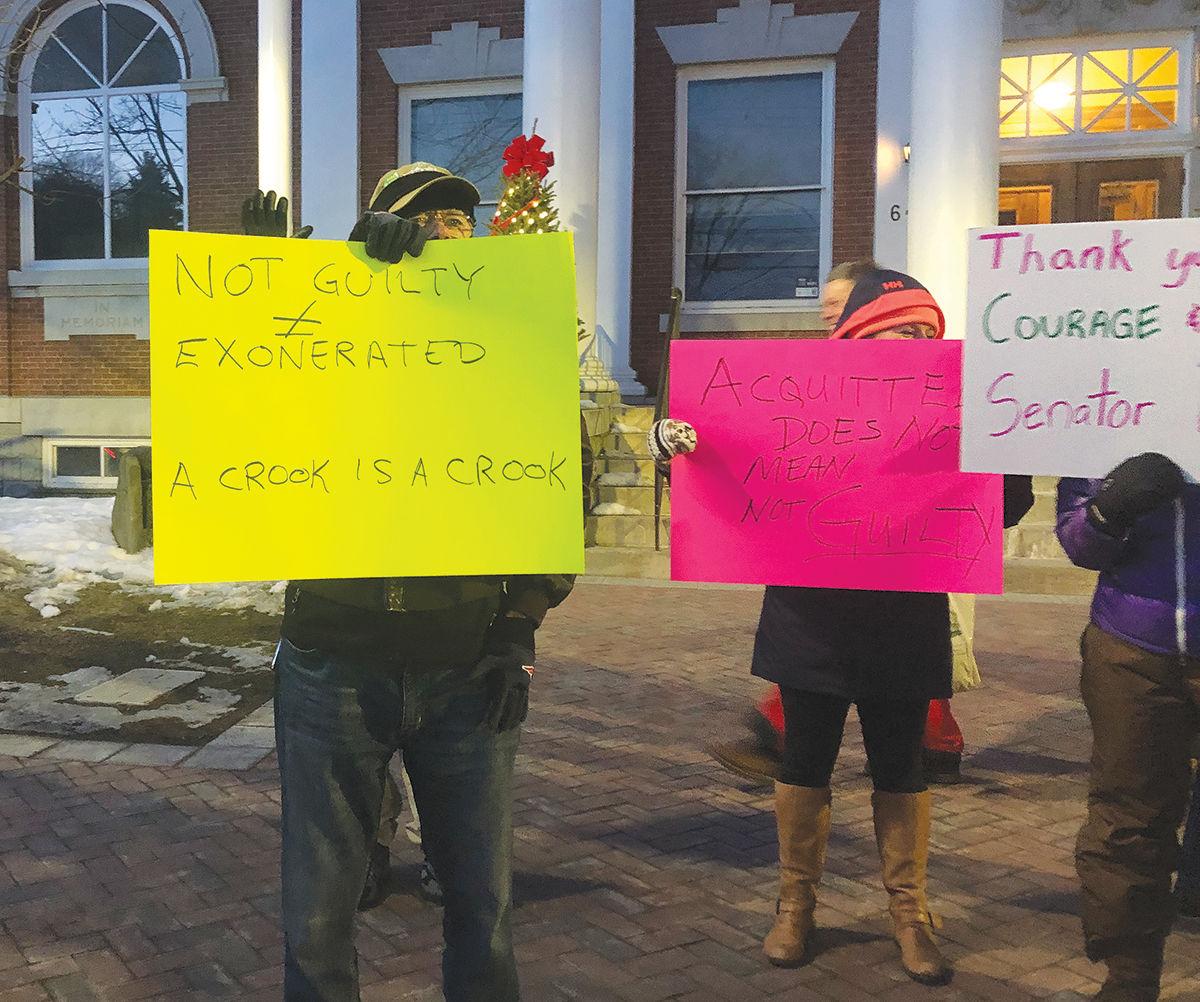 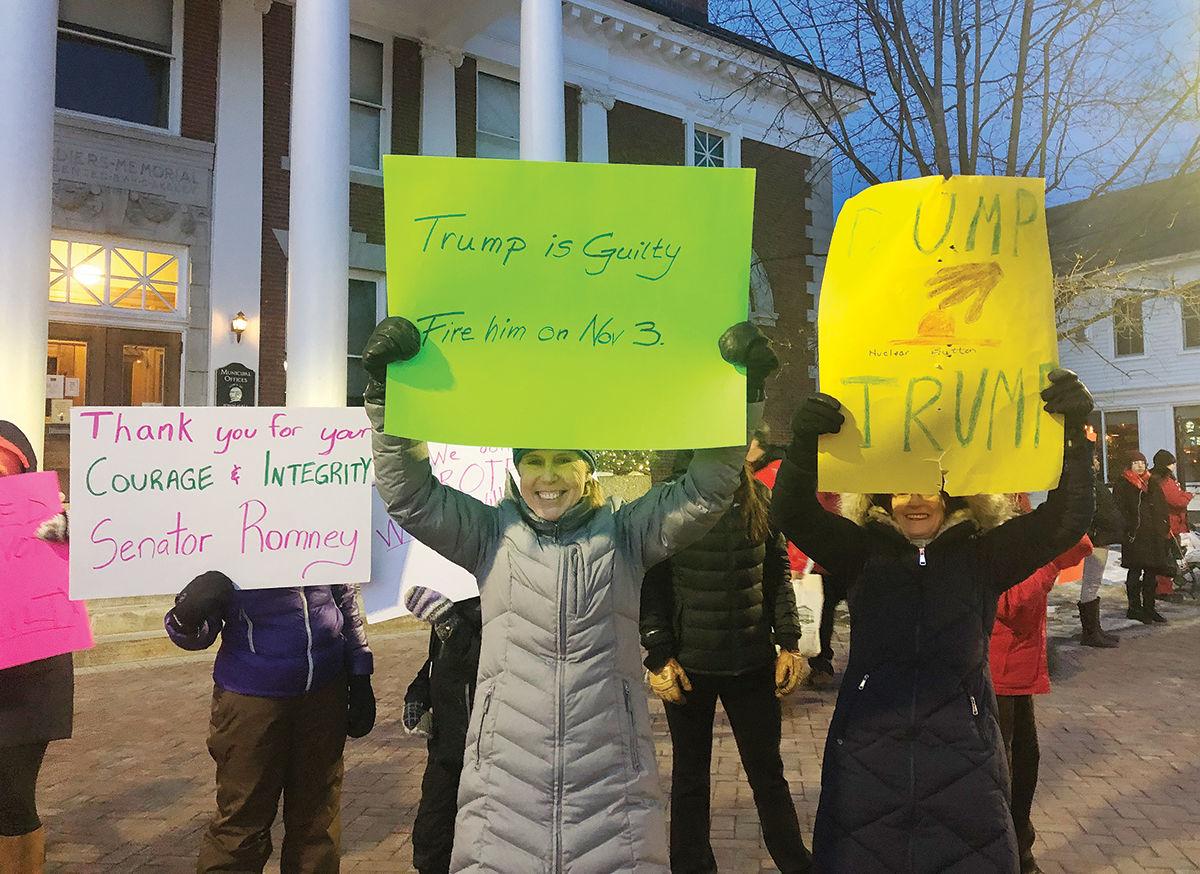 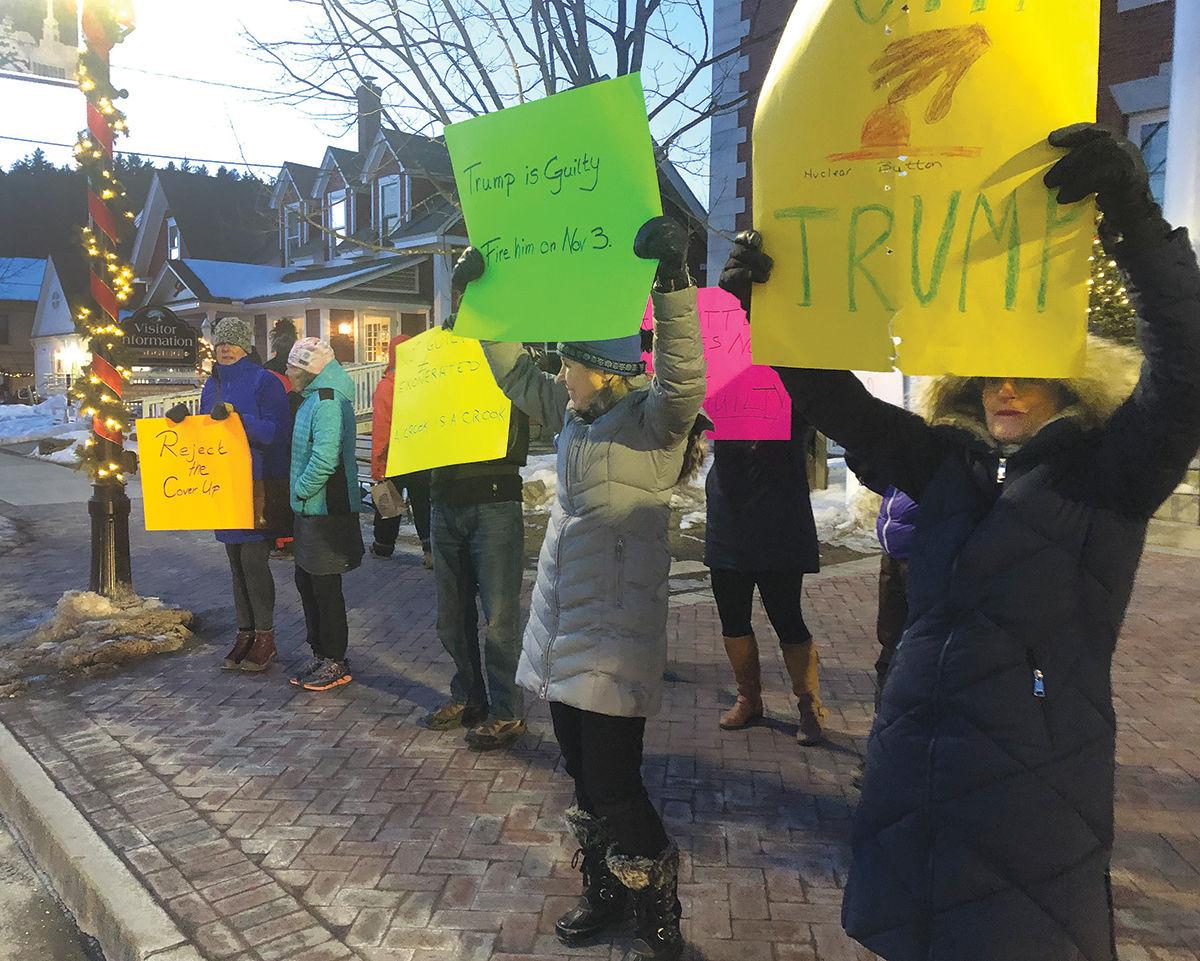 “I’m disgusted with this whole mess. This man is an unbelievable narcissistic sociopath, and it just drives me crazy,” April said as he waved to drivers who honked their car horns in support as they drove by.

“This guy is out of his mind!” April exclaimed. “He’s ignorant. He can’t read. He can’t speak. He’s terrible. He’s crazy and he’s going to drag us all down with him. The Senate has given him full affirmation to do whatever he wants. There’s no justice at all with this Congress.”

The vote itself was a foregone conclusion, so much so that by Monday evening, Stowe resident Josi Kytle had emailed like-minded people to protest Wednesday in Stowe.

Kytle was motivated by an email from former Stowe High School teacher Mark May, alerting her of a protest planned in Burlington.

“Why go to the Burlington one?” Kytle said. “I’ll set one up here.”

Lytle previously organized a protest after the confirmation of accused rapist Brett Kavanaugh to the U.S. Supreme Court.

“It’s so depressing what’s going on,” Lytle said. “It’s so hard and it’s so lonely and you get so frustrated, but at least when you come out, you have this community feeling that frustration, and you can do something about it.”

Stowe resident Dan Green said the vote to acquit Trump will reflect poorly on the Republican Party at large.

“I’m an independent, and it’s sad to see the Republican Party go morally bankrupt. This is their legacy and they’re no longer Republicans; they’re Trumpism. I never thought we’d get to this point, but this is where we’re at,” Green said. “I always knew Mitch McConnell is corrupt, but I thought there would be some people that would have some conscience and do the right thing, and it just didn’t happen.”

Jo Sabel Courtney of Stowe expressed concern about whether it will be possible to vote out Trump in November.

“I get the whole ‘let the voters speak’ thing, which is what the Republicans are saying, but how do we know the elections are going to be fair?” Courtney asked as she held a sign reading “Reject the cover-up.”

Stowe resident Margi Sells saw some parallels between the Trump impeachment and when President Richard Nixon resigned when facing the possibility of a trial.

“When I learned my husband voted for him (Nixon) a second time, I almost divorced him,” Sells recalled. “He said, ‘It’s OK, Margi, I know he’s a crook, but the system will flush itself,’ and it did. Ken died a while back, and I’m so upset with him right now because he’s not here to make sure the system flushes itself. This time, I don’t know that it’s going to happen.”

Johnson’s annual meeting will be a mix of dollars and sense, with a $3 million town budget up for approval and a full slate of aspirational articles for townspeople to talk about.

The Lamoille South school district voted Monday to extend the contract for embattled superintendent Tracy Wrend, citing her strong leadership, despite recent outcry from a vocal segment of the population bent on her termination.