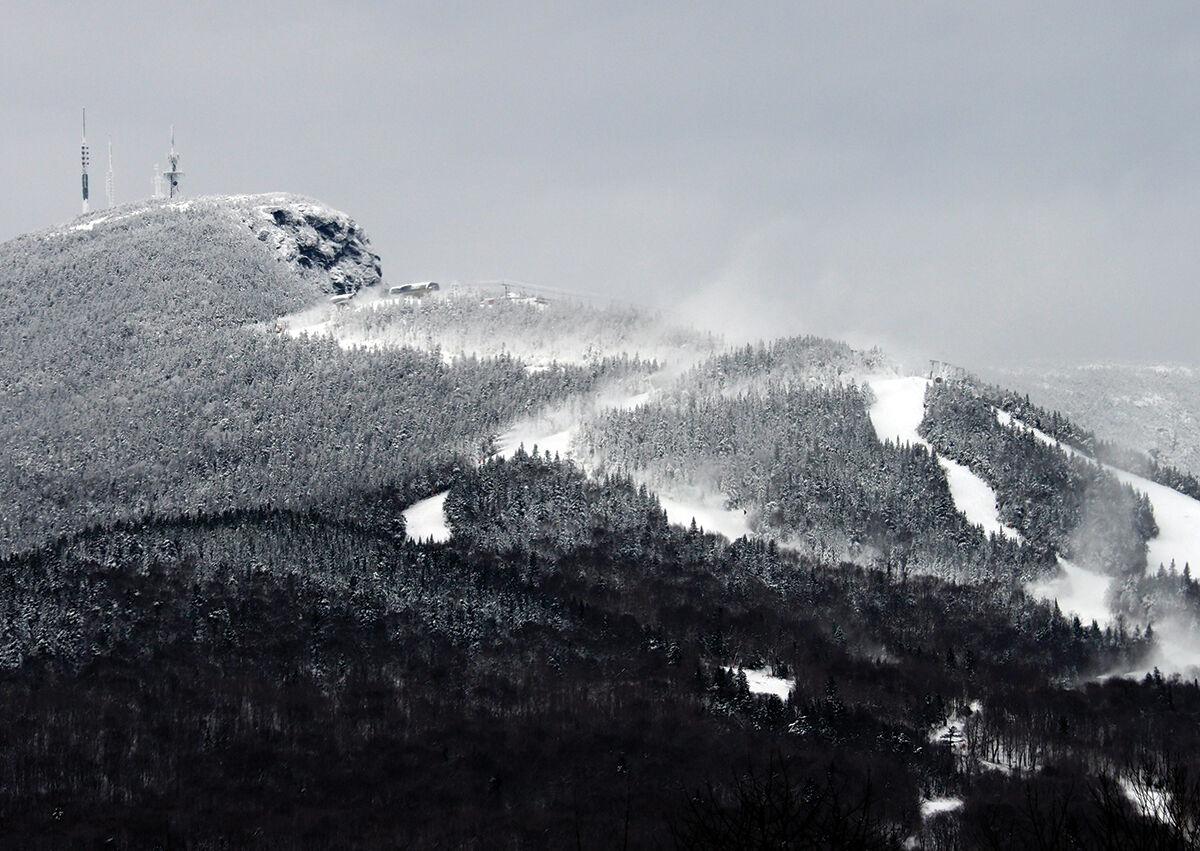 Wisps of white from Mansfield mark the start of Stowe’s 85th year of lift-serviced skiing. 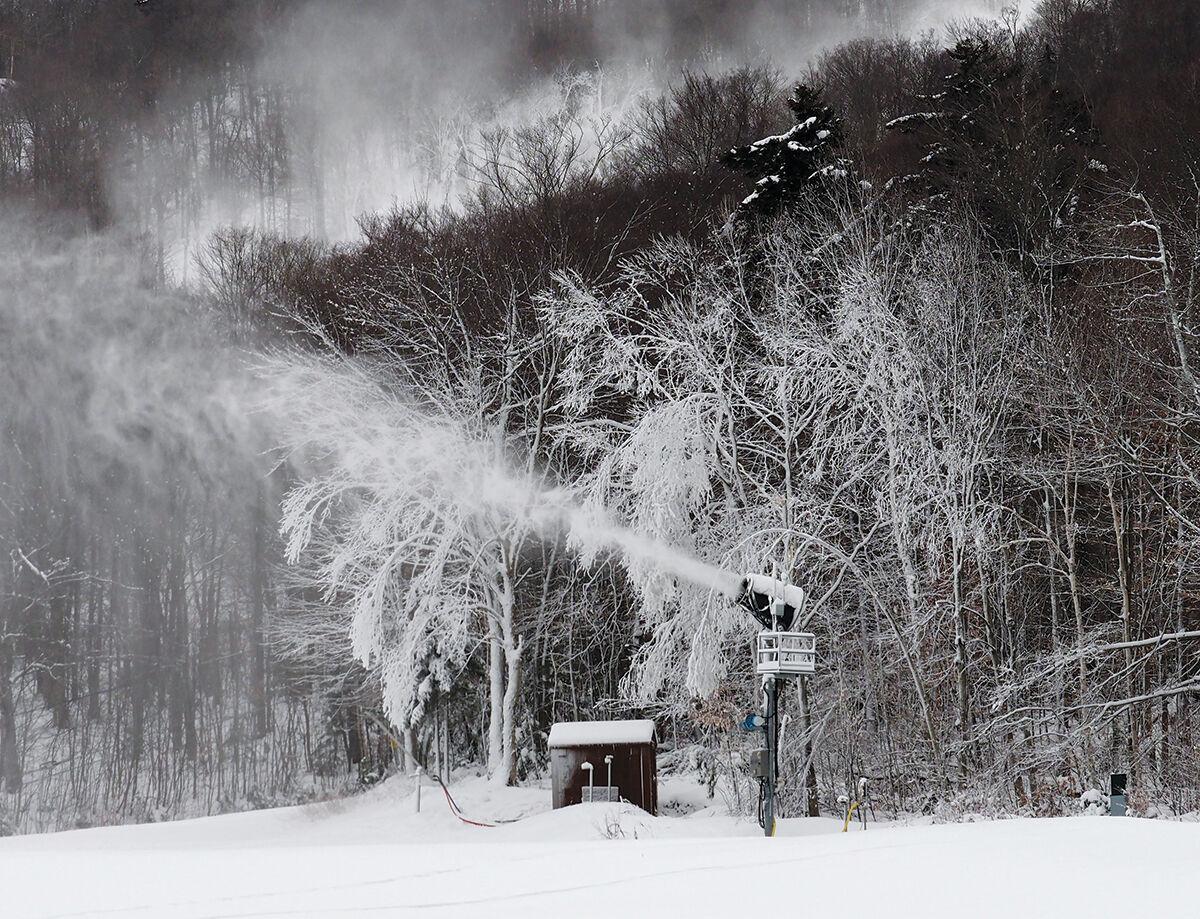 Wisps of white from a snow gun mark the start of Stowe’s 85th year of lift-serviced skiing.

Wisps of white from Mansfield mark the start of Stowe’s 85th year of lift-serviced skiing.

Wisps of white from a snow gun mark the start of Stowe’s 85th year of lift-serviced skiing.

With the chairlifts and gondola running at full capacity, cafeterias and bars back to slinging burgers and beers, and masks optional while playing in the snow, things will be pretty much back to normal at Stowe Mountain Resort this ski season.

The season opens Friday, a week later than expected, but that’s because of uncooperative weather, which is also normal.

“This year, it’s less about what’s required, and more about what we’re going back to,” resort vice president and general manager Bobby Murphy said this week. “Normal.”

In addition to marking the relaxation of COVID-19 protocols, this year marks the 85th season since the first rope tow was installed up Mount Mansfield.

“That was the first season that people weren’t sidestepping up the mountain,” Jeff Wise, the resort’s head of communications, said.

The story about what to expect for the 2021-22 season is what to not expect.

There will be no more reservation system like the one implemented last ski season during the first year of the pandemic.

There will be no masks required outside or in many indoors locations — guests can go sans mask in restrooms, locker rooms, warming areas, retail and rental shops and sit-down restaurants. Masks will still be required in more cafeteria-style areas like the base lodge, the Midway lodge and the Octagon.

The Spruce Peak side, which is not operated by Vail, will set its own rules, but those had not been announced as of press time.

There will also be no more half-capacity lift rides, meaning four people can once again ride the Quad at a time, eight people in the gondola, and so forth.

Already, even for opening day, there will be two lifts running, instead of just the Quad — the Adventure Triple on Spruce Peak will also run, allowing skiers and riders to spread out and access easier terrain.

While the resort is planning to start with fewer restrictions than last year, the management is fully aware that Vermont has been seeing higher-than-ever levels of COVID-19 infections and is prepared to shift into a more vigilant mode of operations, if needed.

Parent company Vail Resorts deals with as many rules and regulations as there are states and countries where it operates, and Wise and Murphy both said the mothership lets the local teams run things as they see fit.

“One thing we will always be in compliance with is state guidelines,” Wise said.

As usual, things will ramp up gradually as the snow base gets built up and more lifts start running, and as more lifts open, so do more amenities — the eateries at the top of the gondola, for instance.

This also allows the resort to stagger its employee work start dates, including for the usual cadre of seasonal foreign workers that weren’t available last year, another return to normal.

“We have international workers coming, and it’s great to see that crew back,” Murphy said.

The free Mountain Road shuttle is also back after a hiatus last year. Wise said ridership had gotten better in recent years before people became hesitant to ride the bus, and this Green Mountain Transit will offer three of the big Gillig buses instead of two during peak days.

Wise said the resort is really pushing for people to ride the bus, saying it’s far and away the easiest, most efficient way to get to the mountain. The Mountain Road shuttle will now have 30 stops per round trip up and back, with a bus showing up every 20 minutes.

The resort is working with the town to boost the bus ridership, too, including placing a gondola right outside the town offices with literature like bus schedules and mountain information.

“All those folks are already parked in a parking lot in town,” Murphy said. “So, you don’t need to move your vehicle if you’re there for a couple days or a weekend or a week.”

Uphill access will remain the same — basically, Nose Dive in the morning before the lifts open and Perry Merrill in the afternoon after they shut down. Easy Mile, near the Toll Road entrance, will allow for people to hike skin up during the day.

Murphy said there’s also an “uphill hotline” number, 802-253-3690, that will have up-to-the-minute information on uphill access.

With this being the 85th anniversary of the rope tow that changed everything, the resort will also have plenty of events and artistic installations to mark the occasion.

Updated to correct the number for the uphill hotline.