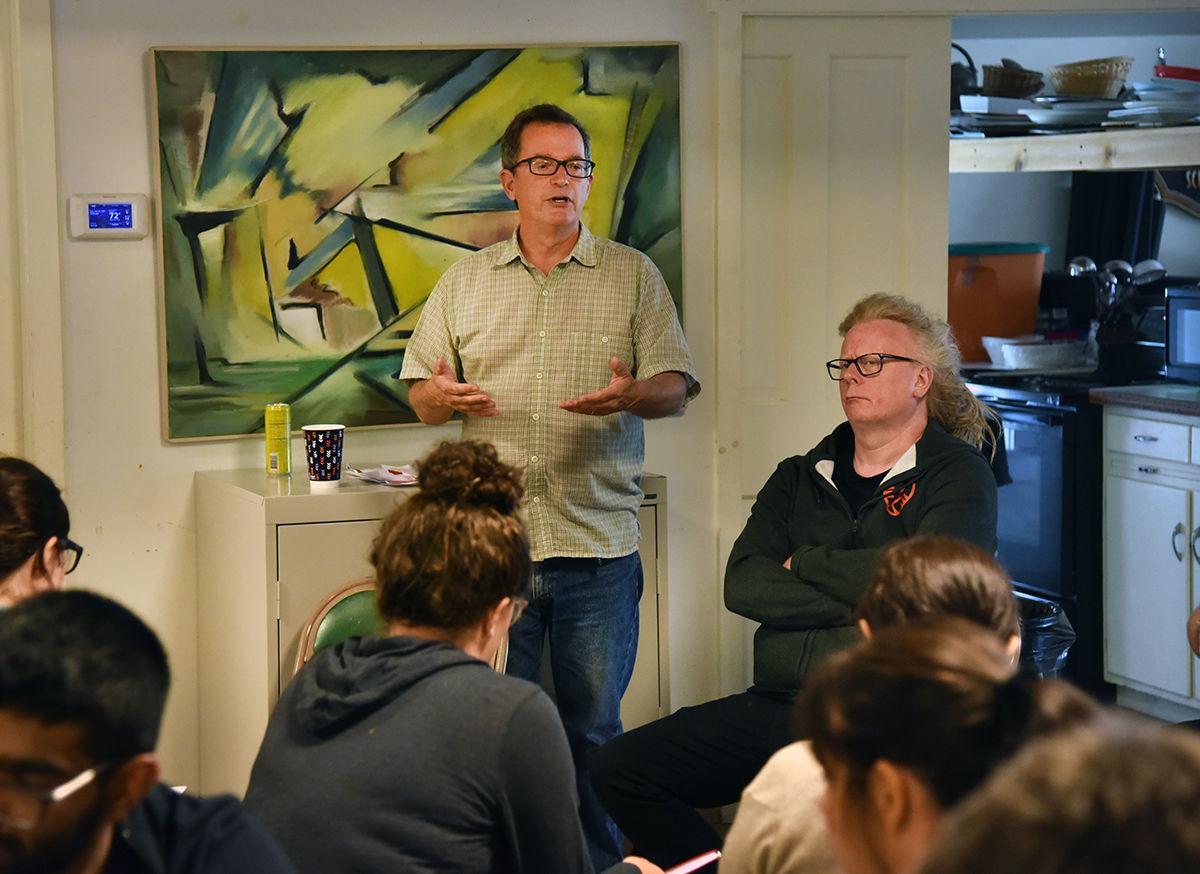 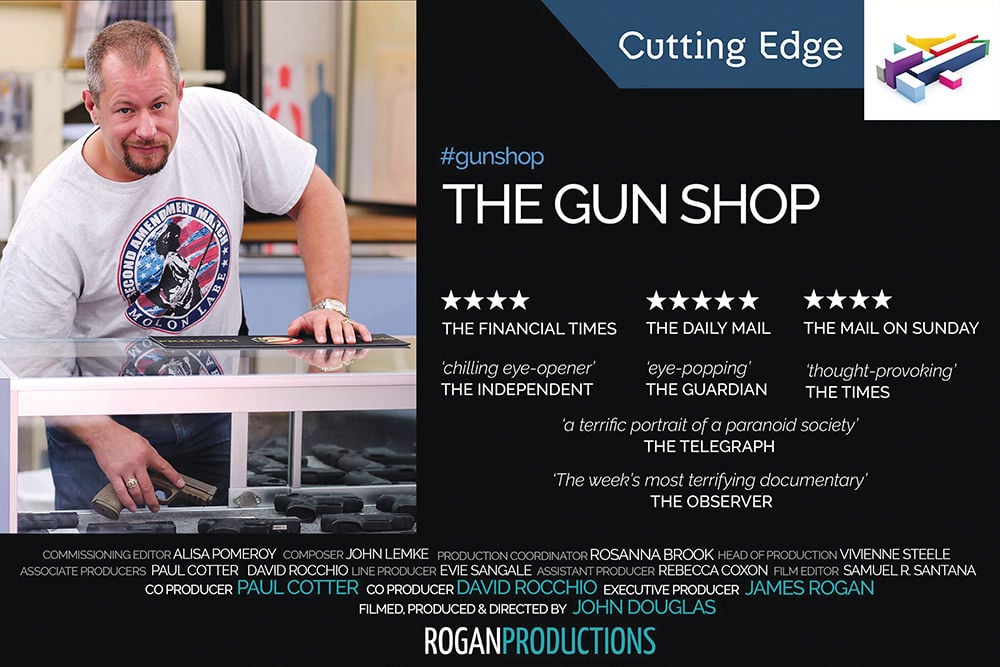 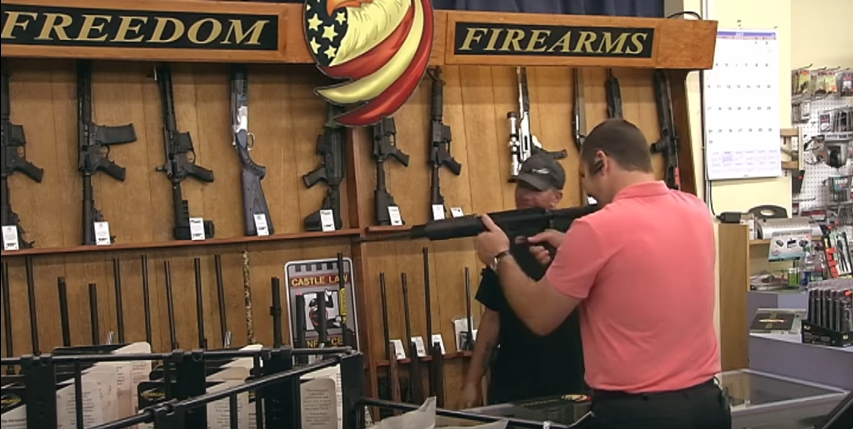 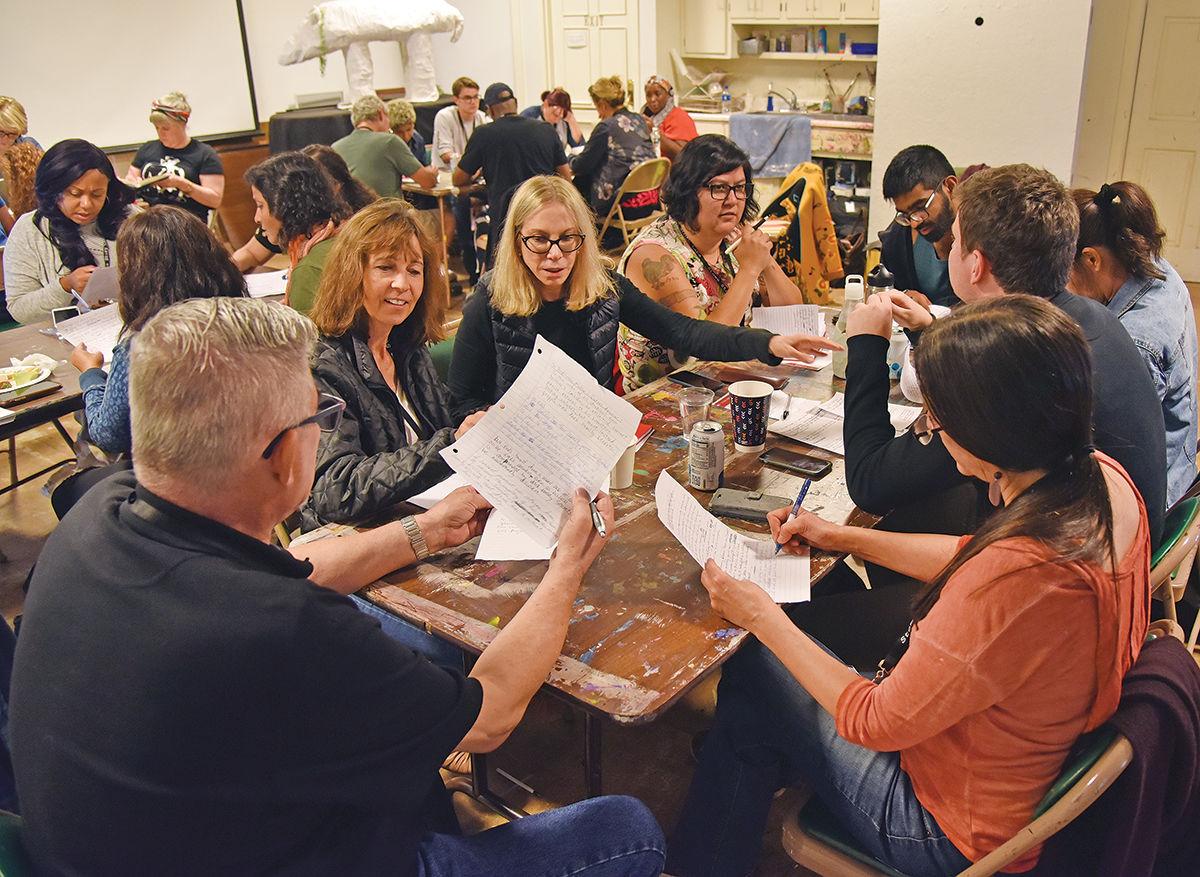 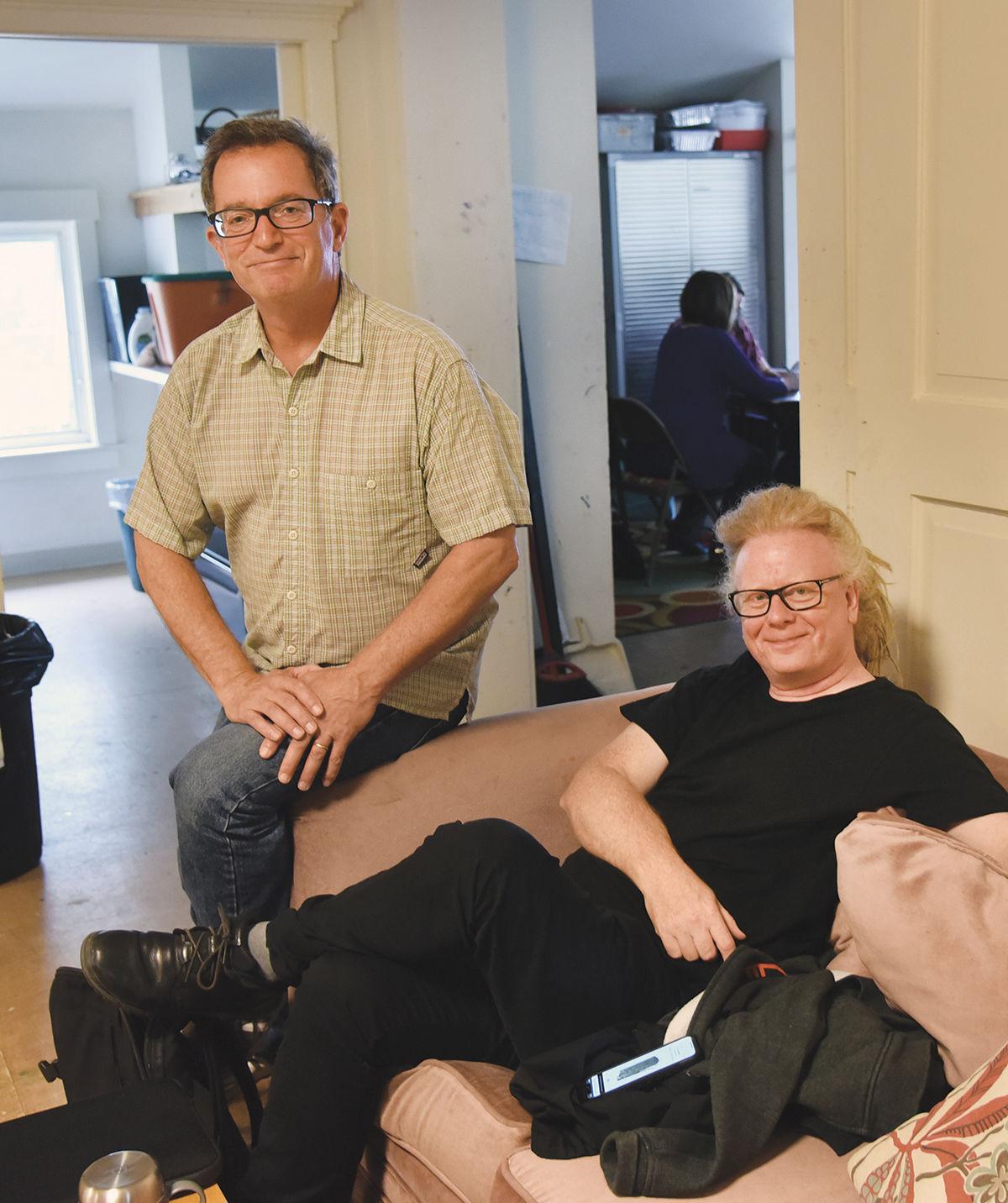 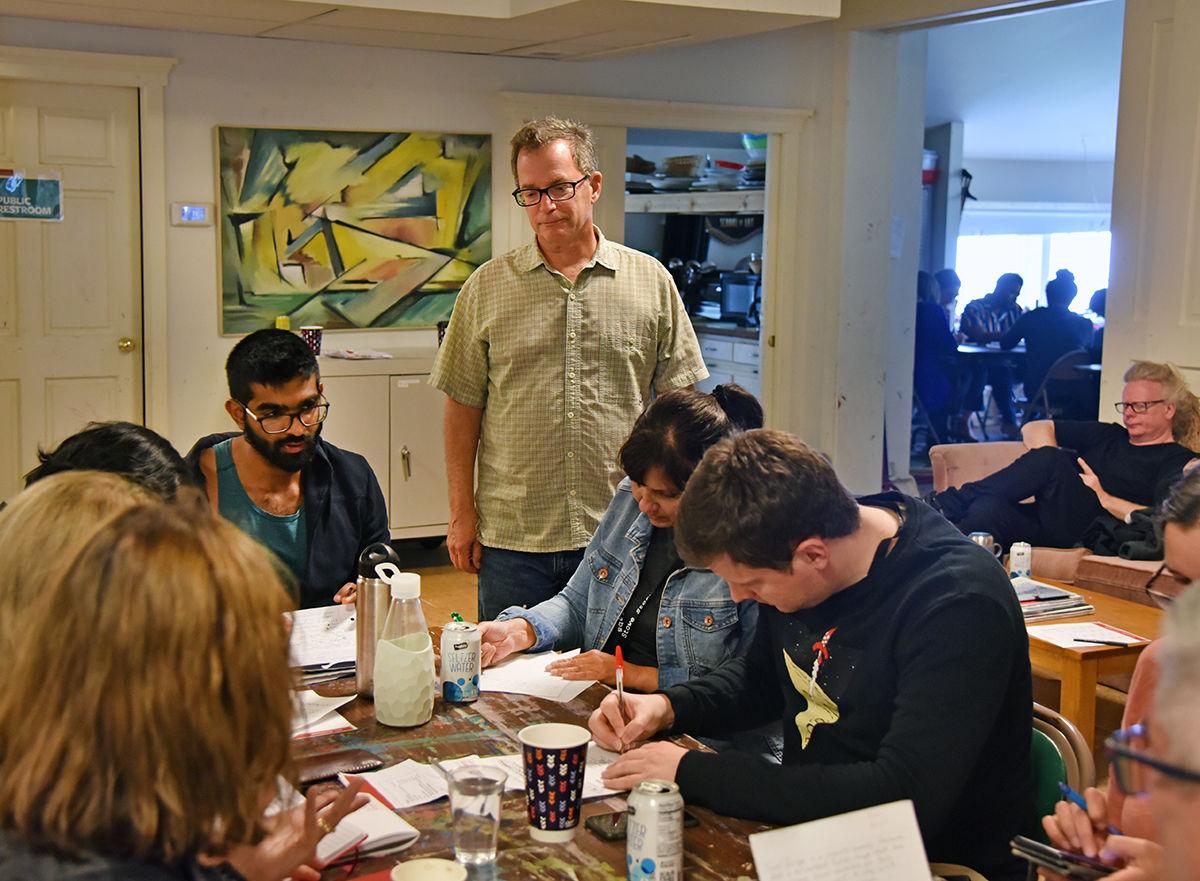 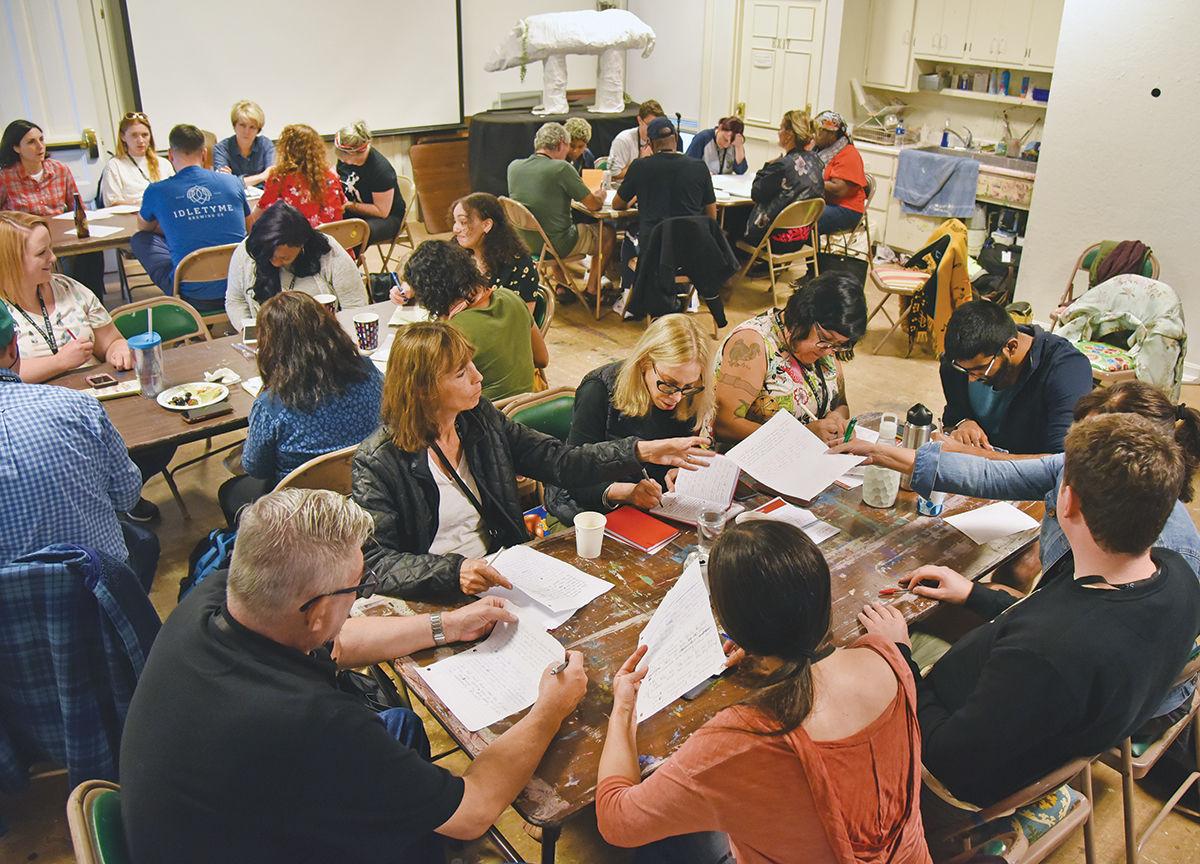 A documentary about a gun shop and the community in and around it — conceived by a Stowe filmmaker — has been nominated for a regional Emmy award.

The film, “The Gun Shop,” is co-produced by Stowe resident David Rocchio, who envisions it as the first entry of a multipart documentary series about guns in America. The other parts haven’t been made yet, but an Emmy nomination is probably a pretty good start.

“Our vision for the series is to open up dialogue between all these different groups that think about guns in different ways,” he said. “The vision is to have the opportunity now to do a documentary about the whole issue of guns in America without trying to generate conflict, but just to give each side an opportunity to talk.”

“The Gun Shop” follows the interactions among the owners, employees and customers of family-run Freedom Firearms in Battle Creek, Mich. It’s a fixed-camera film with no cutting between commentators and no presence from the film crew, and as such lets viewers draw their own conclusions about guns and gun ownership.

“Nobody is listening to the other side. Everybody talks only to their own tribe,” Rocchio said. “And being in Vermont, it was interesting, thinking of it in the context of Bernie’s last presidential run, and the heat that he was getting on guns, because American politics doesn’t do nuance.”

It was filmed by a British crew from Channel 4, which originally broadcast it for an audience not accustomed to this slice of American culture. The film claims that there are 65,000 places to buy a gun in the U.S.

The film was nominated for a Mid-America Emmy Award in the “Documentary-Cultural” category. Mid-America is one of the 20 regional Emmy chapters, serving the part of the country running from Illinois to Louisiana. Illinois Public Television is the documentary’s American broadcaster.

The awards ceremony is Oct. 5 in Branson, Mo.

The documentary is difficult to find in this market, although a quick internet search might find it streaming. And Rocchio hopes to schedule a local screening of it. It already played at the Stowe Cinema in 2017, shortly after it was produced.

Rocchio came up with the idea after visiting Parro’s Gun Shop in Waterbury. He thought it would be interesting to just observe a gun shop over a period of time.

At a writers retreat, he met James Rogan, a British filmmaker, who took a shine to the idea. Together, they pitched it to Channel 4, which liked the idea, except its proposed Vermont location.

“The big push against it was just that it was too much hunting,” Rocchio said. “They were thinking, as a voyeuristic documentary in Britain, hunting isn’t alien; people have hunting rifles. They wanted something that was handgun-focused.”

Besides their notion that Vermont gun shops would likely be more focused on hunting supplies, the folks at Channel 4 wanted to the movie to hit some specific marks: It had to deal with handguns, it had to involve concealed carry permits, the shop had to have a shooting range, and it had to be in a “somewhat urban, but not strictly urban, setting.”

“And we didn’t want characters. We wanted human beings,” Rocchio said. “Texas is a character, so it’s hard for us to choose Texas because it comes with a lot of preconceived notions.”

Most importantly, the documentary needed to be filmed using a fixed rig camera and microphone setup. That kind of style places the cameras around the shop so that they’re unobtrusive and unbiased, so the people in the film — the customers and the gun shop employees — would feel more at ease and maybe even forget the cameras were rolling.

Anybody who came into the shop was asked to sign a release form that said they might be used in the film. They wouldn’t have editorial control over how footage of them was used. Many of them were interviewed later in their homes about their views on guns.

“We didn’t want to try to manufacture drama,” Rocchio said. “We didn’t use any talking heads, we didn’t have any experts, we didn’t try to catch them in a gotcha moment. We weren’t trying to prove they were right or wrong.”

Rocchio reveals that the documentary was filmed in 2016, but you wouldn’t need that insider information to piece together what year it is in the film. You would just have to remember current events. In the course of the one-hour documentary, three high-profile shootings happen across America in 2016.

There was the July 6 shooting of Philando Castile in Minnesota by a police officer who thought Castile was going for a gun when he was going for his wallet.

There was the very next day, when a gunman went on a rampage in downtown Dallas and killed five police officers and injured nine others.

Before those two, there was a mass shooting in Kalamazoo, Mich., just 25 miles from Battle Creek and Freedom Firearms. One of the young victims, her appearance forever changed, provides a brief but unforgettable interview on camera.

The gun shop employees react on camera in much the same way everyone in America did — shock and disappointment, anger, resignation — but their reactions are filtered through a near-inseparable dedication to the Second Amendment.

Rocchio said the sad reality is that the filmmakers didn’t have to go out of their way to bring in shootings from other places and other times. A shooting was bound to happen, sometime, somewhere, while the cameras were rolling.

“These times that we live in, guns are a tragic chapter right now,” he said. “We didn’t worry about creating drama; we knew the drama would be there.”

Rocchio said director John Douglas did a masterful job of taking all of those interviews and images, the loud pops and rat-a-tats and long silent pauses, and piecing it together. He said there were probably 20 storylines left in the editing room.

“The problem John had, he had a lot of content, all that was good. People were articulate, they were thoughtful, they took the time. And then he had to piece that together,” Rocchio said. “And I thought he did a brilliant job. I thought his pacing, use of the story, to build towards a conclusion, which was just organic, was brilliant.”

Rocchio, 59, has more of a legal and government background than a film one, although the creative career is catching up.

After Dean left office, Rocchio decided to turn his attention to writing and filmmaking. He has directed two short films — “The Brothers” in 2011 and “The Meeting” in 2014 — and is working on numerous projects.

In 2013, Rocchio helped organize Stowe Story Labs, a three-day workshop (now expanded to four days) aimed at helping budding screenwriters and producers make their films and get them to audiences.

The first Story Labs brought 16 filmmakers, half of them from Vermont and the rest from other New England states. Two years later, “with zero marketing,” according to Rocchio, there were 30 from all over the world, and attendance was soon capped at 45.

The 2019 Labs wrapped up this week with 49 people, and that was an exception because the talent pool was so deep. It was 73 percent female, “and very diverse,” Rocchio said.

“We don’t care what the background is,” he said. “We look for stories that are about identifiable characters, regardless of the genre, horror, drama, whatever, with real notes of hope, and some sort of humanist ability to leave the theater with things to think about.”

Note: Rocchio writes a monthly column for the Stowe Reporter.

Film can help us see things maybe with new eyes

I have not spent much time in the South, and nearly no time in the Deep South. This is partly due to the physics of family (sister in Italy, w…