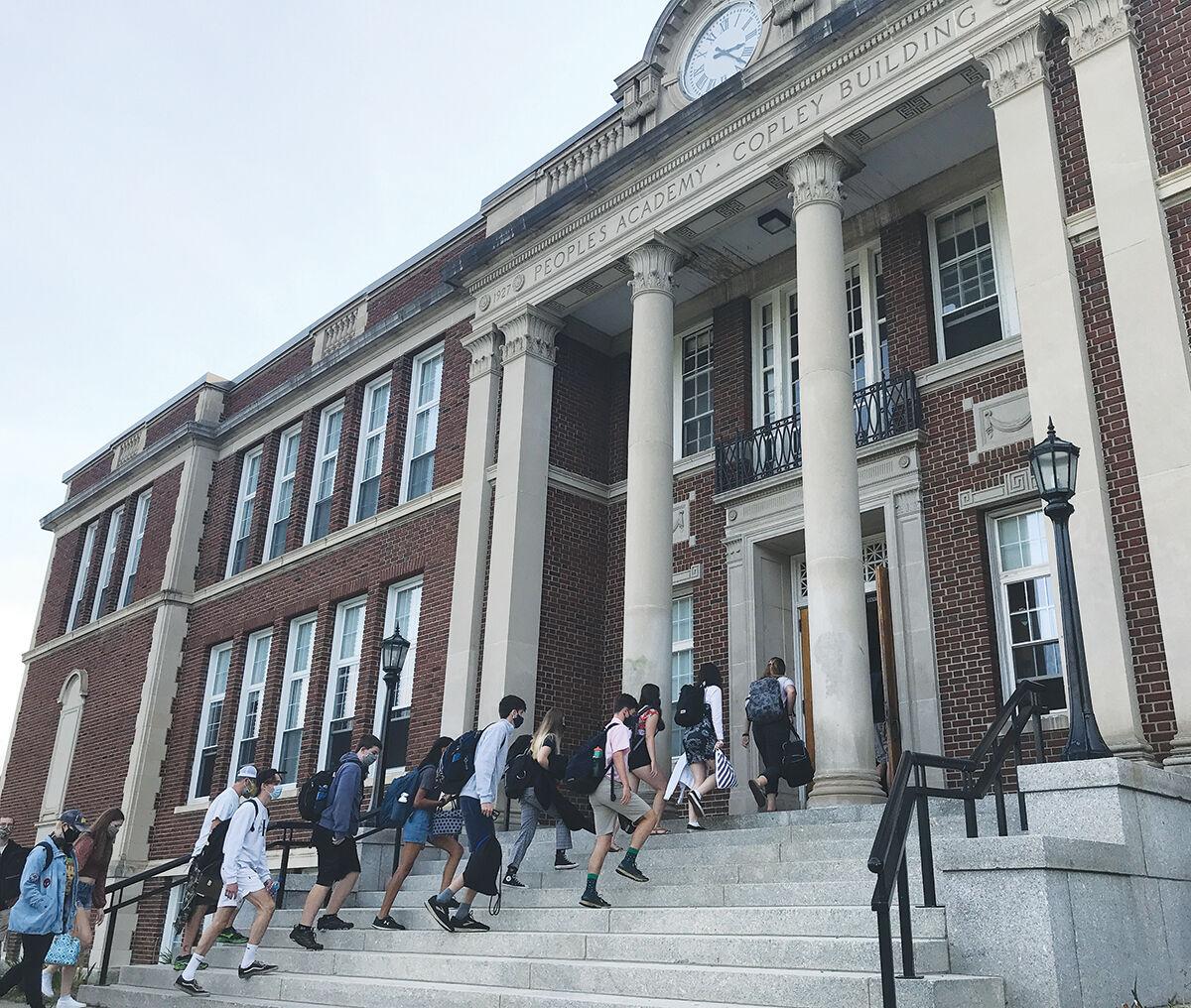 Peoples Academy students walked through the front doors of the school in small groups, the start of a new year. 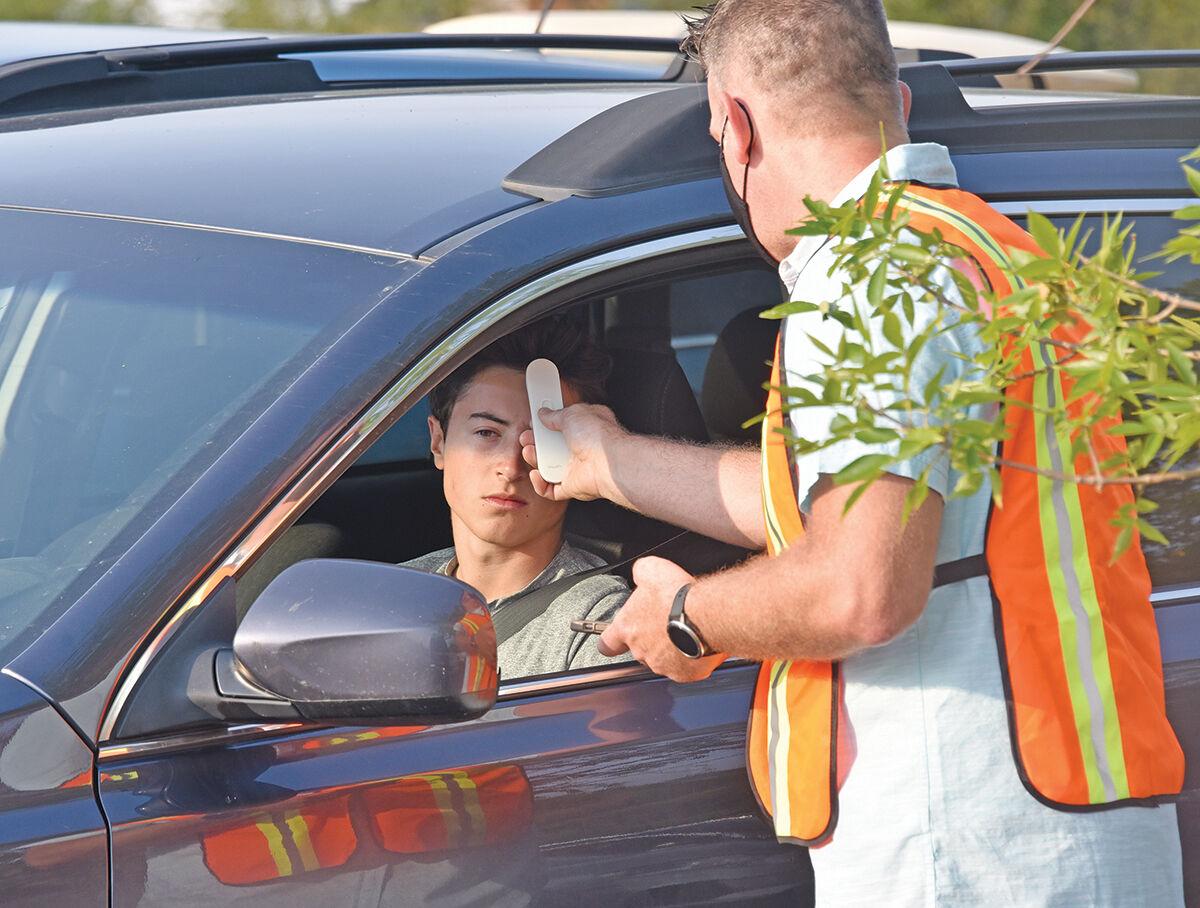 Students arrived for the first day of school in Stowe Tuesday, some by bus and some behind the wheel of their own cars. No matter the means of transportation, though, the drill was the same: temperature checks and health screenings.

Peoples Academy students walked through the front doors of the school in small groups, the start of a new year.

Students arrived for the first day of school in Stowe Tuesday, some by bus and some behind the wheel of their own cars. No matter the means of transportation, though, the drill was the same: temperature checks and health screenings.

Stowe High School’s decision to not offer Advanced Placement classes this year has drawn the ire of parents and students, who describe the move as hastily made and an obstacle to getting into competitive colleges.

Peoples Academy will still offer its AP classes, leading some to wonder why Morristown students are getting opportunities not afforded to Stowe students.

“I don’t understand how the same group that was able to successfully transition to a fully online program in about a week can’t figure out how to offer AP classes,” Stowe parent Alan Ouellette said during the Sept. 1 school board meeting, four days after the news was dropped. “Notifying students that there’s not going to be AP classes less than two weeks before the school year starts is unacceptable.”

AP classes are popular among college-bound students because the class-ending AP test looks good on a student’s resume and a high score can even exempt a college freshman from having to take introductory classes. It may be the ultimate example of “teaching to the test.”

The stated rationale was Stowe High teachers had discussed the feasibility of teaching an entire necessary AP curriculum in one semester, and found it couldn’t be done.

But the school is offering advanced versions of subjects with content similar to an AP class, and the school has offered support for students who want to take the test online.

“We were screwed over,” Evans said.

But, her parents “really dug into everything” and managed to get Evans enrolled in U.S. History and British Literature classes at the University of Vermont, and she thinks that will burnish her resume when applying for colleges. She said students are able to take one AP class online through the Vermont Virtual Learning Cooperative, the chosen route of students whose learning will be fully remote during the pandemic. Evans is going to try and sign up for AP psychology.

Evans, more than most adults who have been public with their protestations, offers support for what educators are going through — “I would imagine that teachers are as frustrated and as lost as we are,” she said.

But it was a heck of a week, and there was a lot of scrambling on her parents’ parts.

“Last week, it was total chaos in my brain, trying to figure out what to do. But by the end of last week, I was more at peace with it,” Evans said. “There are still a lot of people who are feeling that way. They feel lost.”

Most of the dozen or so people who spoke at the Sept. 1 board meeting were angry at the school’s decision. Two parents, Kelly Lyden and Joan Fox, said the Aug. 28 decision was like “a bomb was dropped” on them. Fox said the move will hurt Stowe High School’s reputation; that prestige was what convinced her and her husband to move to Vermont from Los Angeles, she said.

Lyden told the board, “I’m wondering if you’ve considered the impact on the seniors who have been working so hard throughout their entire scholastic career and who want to apply to competitive colleges.”

Evans said there are times when the socioeconomic divide between those who live in Stowe and those who live in Morristown is wider. This is one of those years, and she acknowledges that many well-heeled Stowe parents probably have more options if they don’t like the way the school is operating. She didn’t include her family in that group, but noted her parents certainly dug in deep and made a lot of phone calls to make things work for her.

“I would say that Stowe kids have more opportunities,” Evans said. “Three people in my class have transferred to Rice (Memorial High School, the private Catholic school in South Burlington), and they do have those means.”

Nancy Gleason told the board that the AP decision widens the gap among Stowe families, too.

“It’s putting a bigger separation between those who can afford to pay for private tutelage to be able to take those AP courses, and those who can’t,” Gleason said.

Back to school 2020: Peoples reunited

Peoples Academy students gathered Tuesday in scattered groups for the first day of in-person classes in nearly half a year, after schools were…