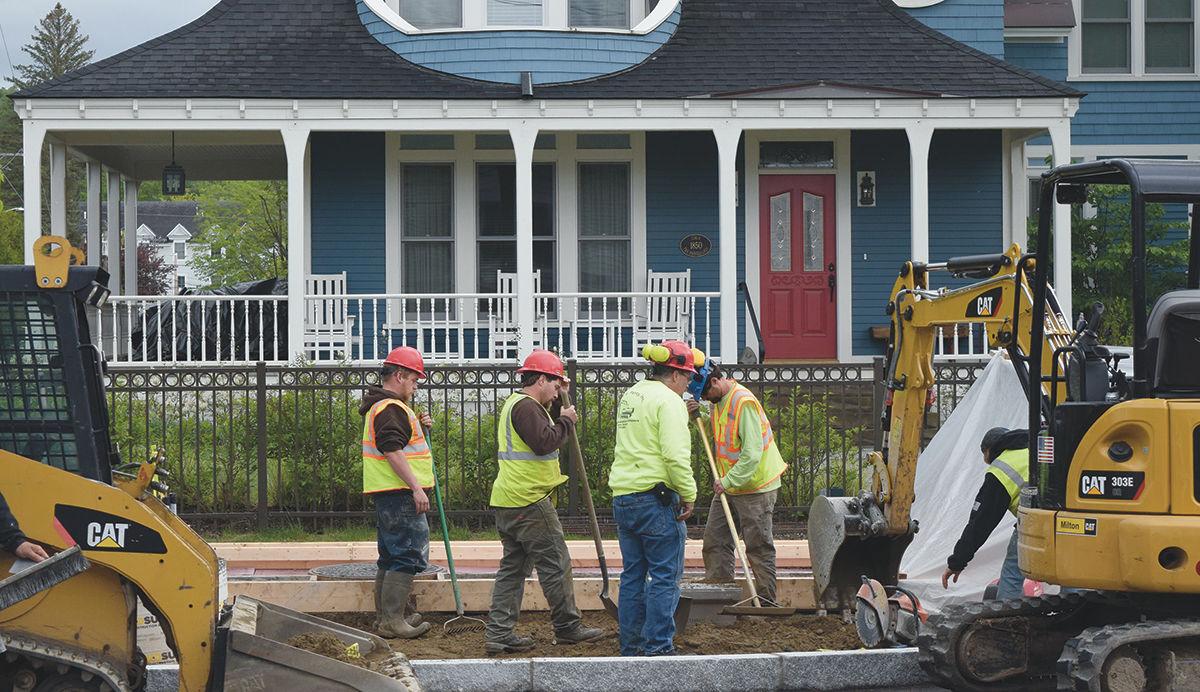 Crews from Dale E. Percy Inc. began pouring concrete on the south side of Main Street this week. Landscaping on the north side began this week, too, including installation of brick pavers and tree planting. 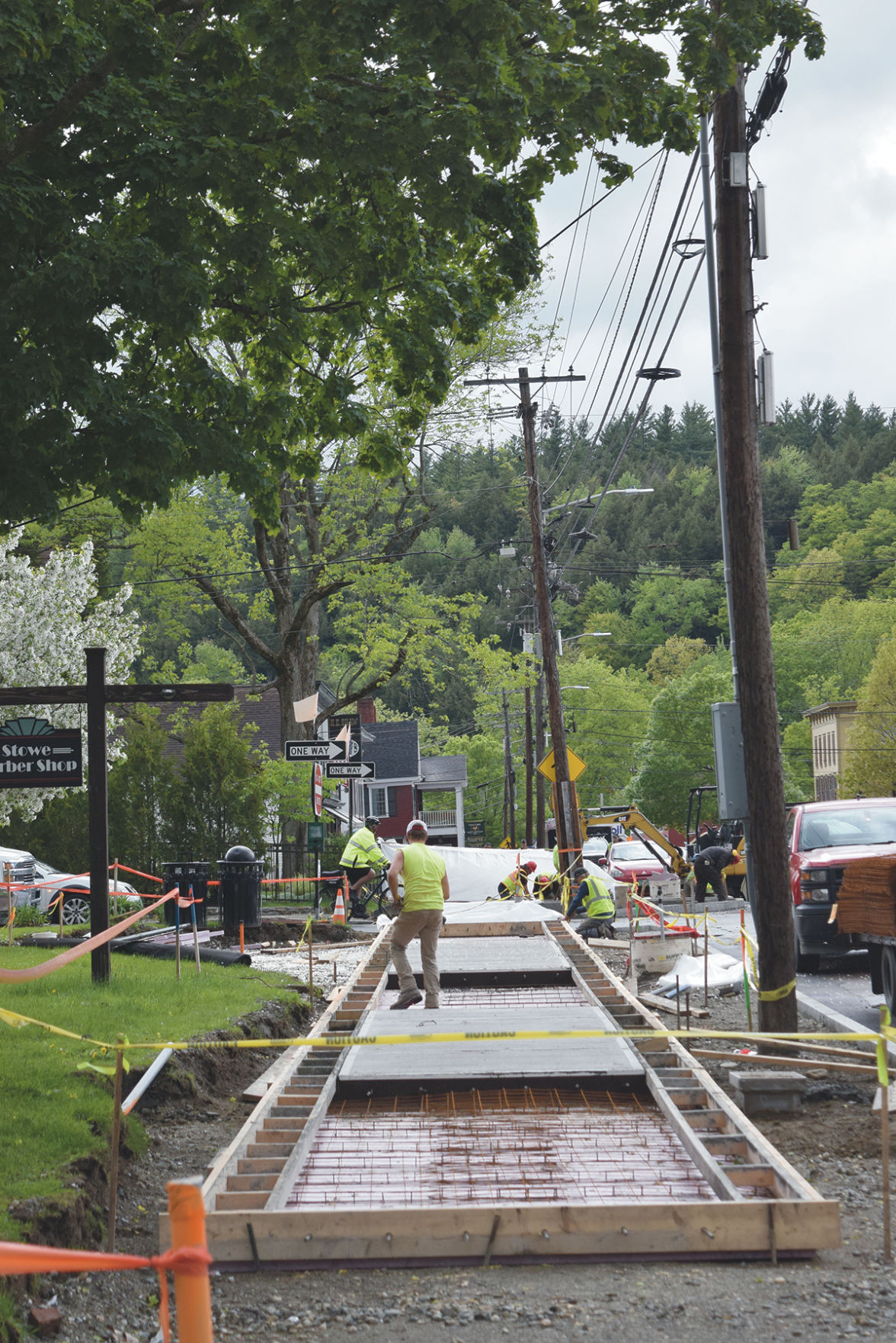 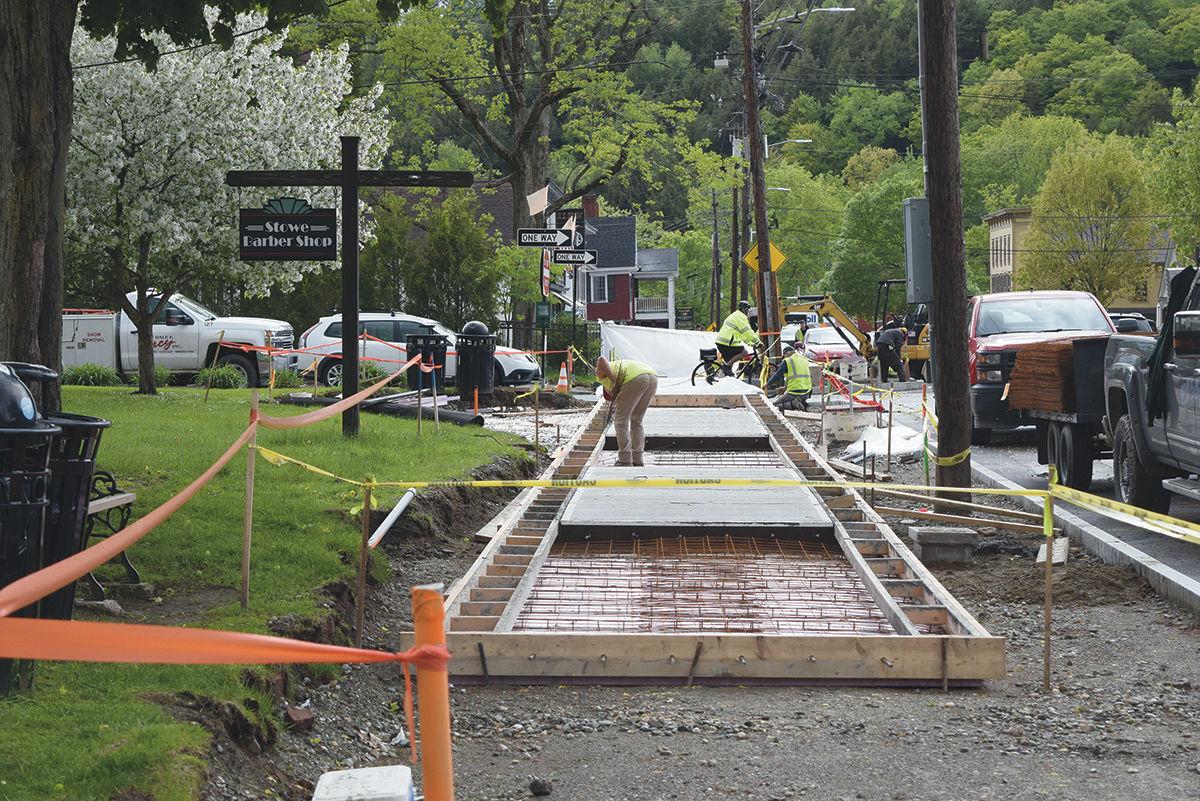 Crews from Dale E. Percy Inc. began pouring concrete on the south side of Main Street this week. Landscaping on the north side began this week, too, including installation of brick pavers and tree planting.

Work on the Stowe village sidewalk reconstruction project is coming along as planned, said Abby Earle, outreach coordinator for the project.

New sidewalks are being poured this week on the south side of town, while underground drilling continues behind Stowe Dental Associates, leading to the town’s cemetery garage and back, to lay conduit for utility lines in Stowe village, which will start to be relocated underground starting next spring.

Earle said drilling was delayed slightly because crews hit rock and had to switch drills, but she anticipates it will be finished by week’s end.

Crews from Dale E. Percy Inc., the construction and excavation company responsible for the sidewalk overhaul and utility line reconstruction, completed final prep work on the Green Mountain Inn, or south side of Main Street, as well as prep work for the sidewalk to the east of the Akeley Memorial Building.

The flagpole at Akeley is now gone; a new one, to accommodate a bigger flag, will be installed this week, Earle said.

Final pours of concrete for driveways and connections between buildings and sidewalk will take place Saturday.

Next week, concrete sidewalks will be poured from the Butler House to Depot Street on the south side of Main Street. Concrete work, landscaping and tree planting will continue on the town-hall side of Main.

Directional drilling will also continue at the cemetery garage, with equipment set up behind the dental office.

Night work was delayed due to rain and difficulty scheduling subcontractors, but it’s now scheduled to begin the evening of Sunday, June 9 from 7 p.m. to 6 a.m. with work on Sunday through Thursday nights.

Traffic will be reduced to one lane, with occasional detours around the village; Earle says more information will be available next week.

Sidewalks in the lower village are being installed as part of the Vermont Agency of Transportation Route 100 Waterbury-Stowe project.

All sidewalk work scheduled next week will take place between 7 a.m. and 7 p.m.

Crews will excavate the area and construct curbs and sidewalks. In addition, crews will be grading the existing bike path along the west side of Route 100 just north of River Road.

Throughout the week, crews will be repairing existing drainage pipes and laying stone at driveways along Route 100. This work will be completed at night except within the Stowe lower village.

Questions about the VTrans project can be directed to Megan Savage at 496-3376; for the Stowe village sidewalk reconstruction, contact Abby Earle at 253-7350.

Two-way traffic will be maintained during daytime hours as crews finish up reconstruction of Route 100 between Waterbury and Stowe. Most of the heavy lifting was done last summer.

The day work, scheduled Monday through Friday, will have minimal traffic impact between 7 a.m. and 7 p.m. However, temporary stoppages or alternating one-way traffic are possible periodically.

The night work, scheduled Monday through Friday between 7 p.m. and 7 a.m., will require lane closures and alternating one-way traffic. Flaggers will direct drivers through the work zones.

The work should be completed in October.

Work on the reconstruction of Waterbury’s Main Street will continue for the road cut and pavement between Park Street and Batchelder Street. Paving of that section on the odd-numbered side of South Main Street is anticipated in the next few weeks and then the travel portion will shift onto the new pavement.

Construction activity near Healy Court is expected for another couple of weeks or more.

Access to all properties and businesses is being maintained during construction, although some temporary alternate arrangements will be worked out in advance if construction is expected to block a driveway.

Waterbury construction continues on South Main Street between Park Street and Demeritt Place, and customers can expect to lose their water as contractors connect fire hydrants and work on the water main.

While planned shutoffs have been as short as a few hours, a series of broken water lines in May led officials to issue notices that customers should boil their water before consuming it.

Customers can sign up for notifications by contacting Barb Farr at 888-3810 or bfarr@waterburyvt.com, or by visiting waterburyworks.com.

Sidewalks on north side almost done

Crews from Dale E. Percy Inc. are down to the finishing touches on Main Street’s sidewalks now.