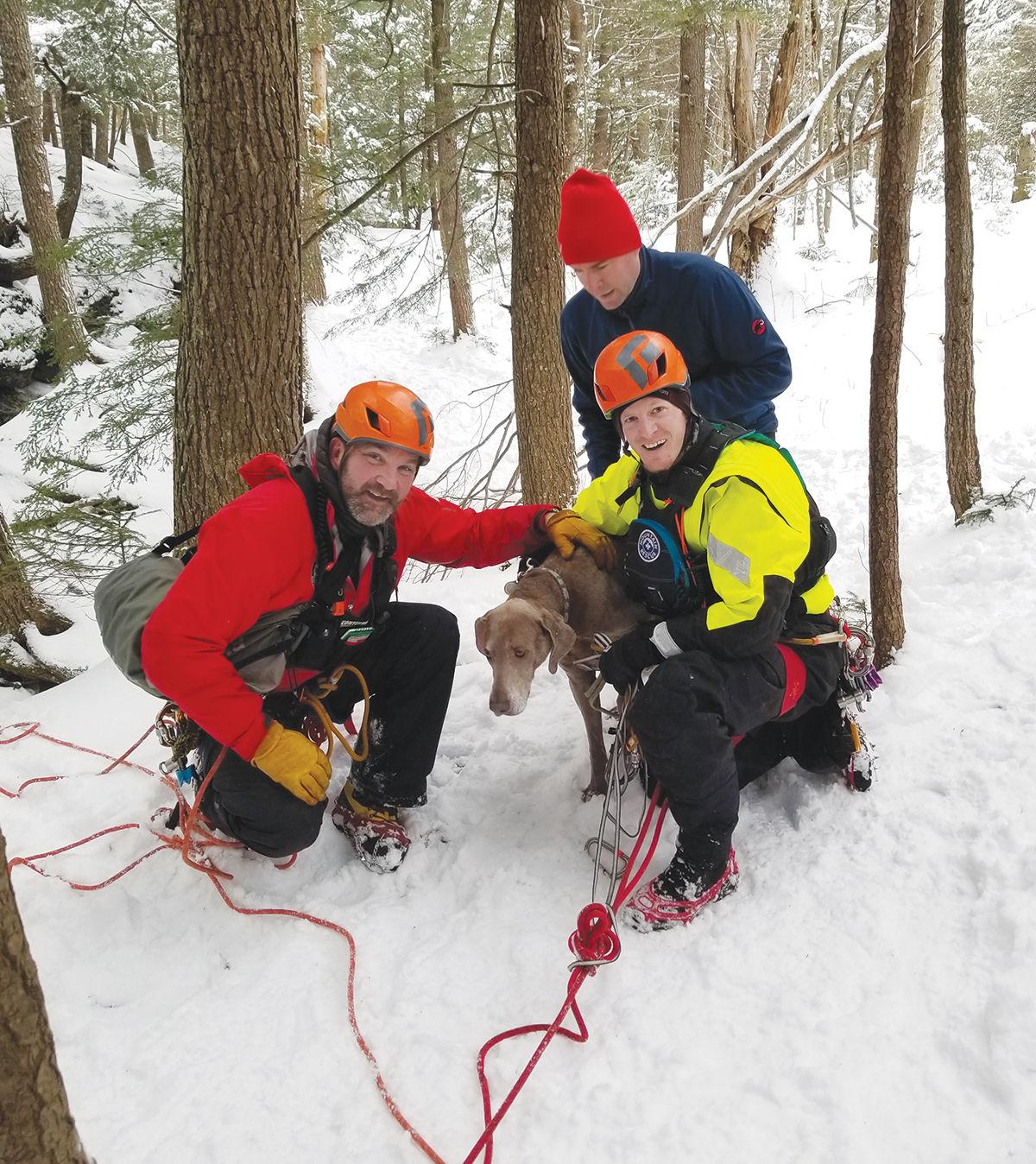 Dog and owner are reunited, as a couple of rescuers enjoy the save. 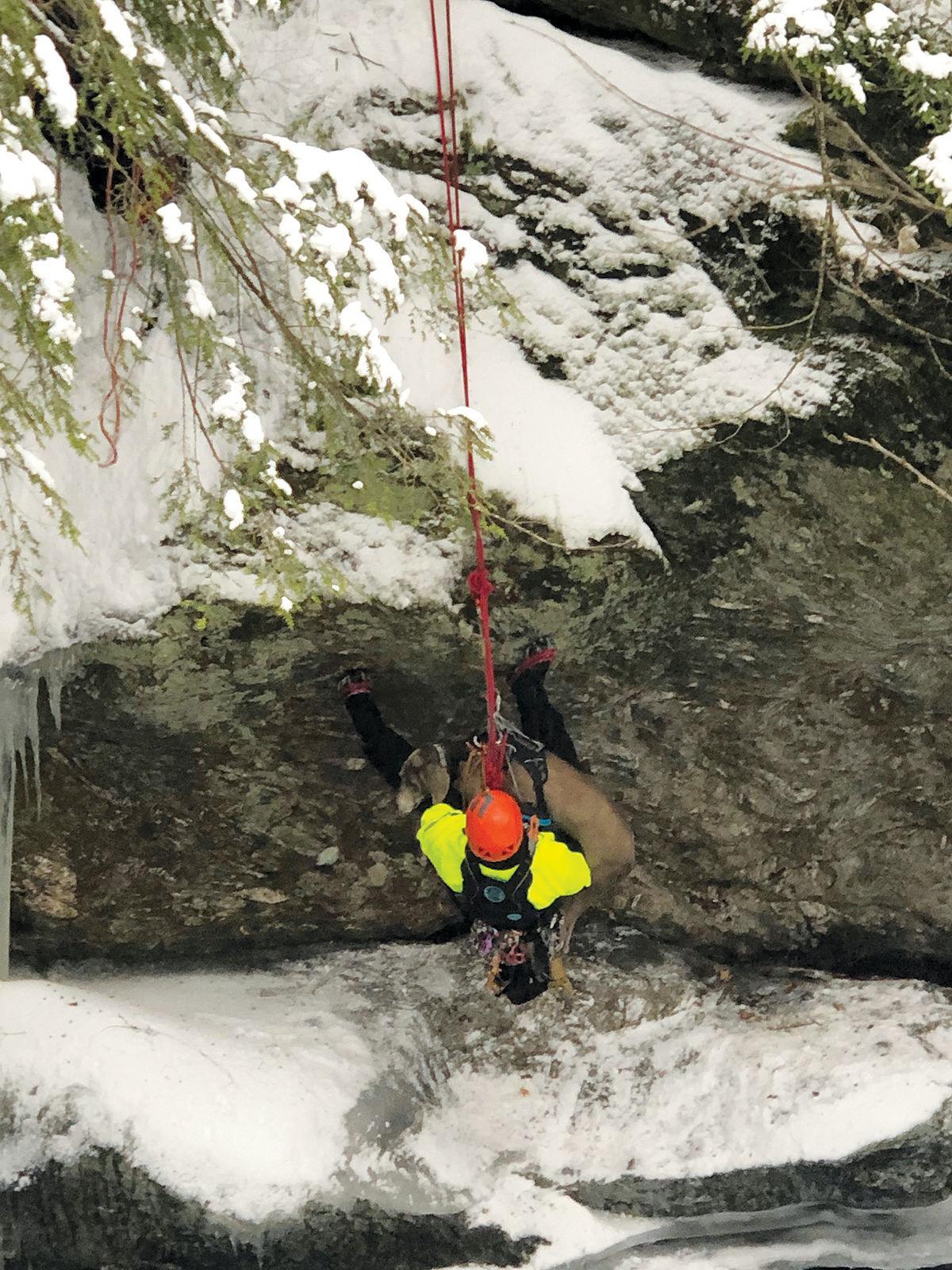 A Stowe Mountain Rescue team member grabs Greta the dog off a narrow ledge and prepares to haul her up. 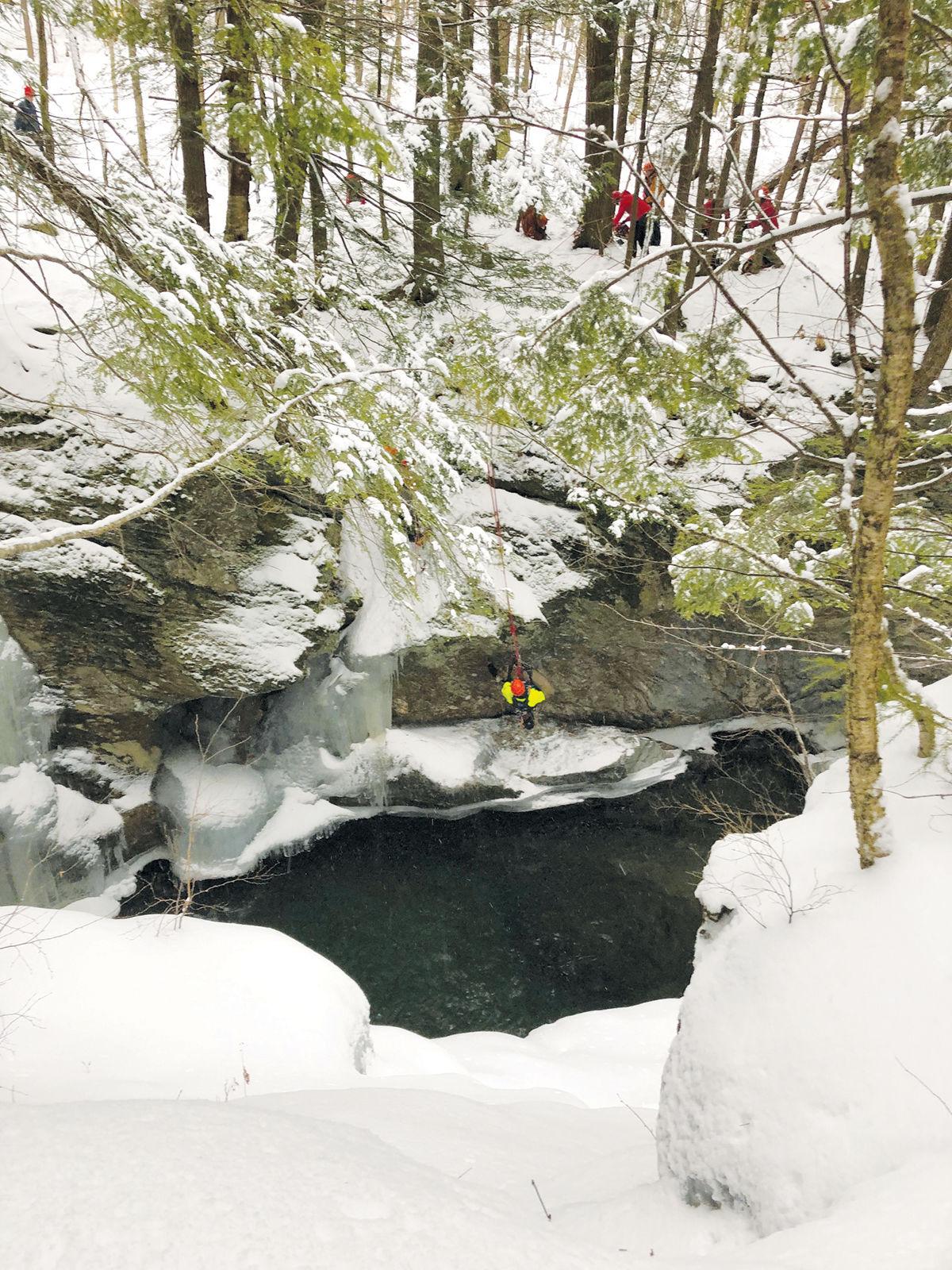 Stowe Mountain Rescue rings in the new year by rescuing a dog from Bingham Falls in Stowe after the pooch fell 25 feet into the frigid water.

Dog and owner are reunited, as a couple of rescuers enjoy the save.

A Stowe Mountain Rescue team member grabs Greta the dog off a narrow ledge and prepares to haul her up.

Stowe Mountain Rescue rings in the new year by rescuing a dog from Bingham Falls in Stowe after the pooch fell 25 feet into the frigid water.

Stowe Mountain Rescue rang in the new year by helping an 84-year-old that had fallen into Bingham Falls — at least that’s how old if you measure in dog years.

The rescue outfit was called out at 8:45 a.m. on Jan. 1 by the owner of a 12-year-old Weimaraner named Greta. According to rescue chief Doug Veliko, Greta and her owner had gone for a walk to the Bingham Falls area from the Notchbrook condominiums and she darted off, got too close to the edge the upper falls and fell about 25 feet into one of the pools.

“He described the dog as chasing a squirrel,” Veliko said. “He just watched the whole thing in horror.”

The owner called 911, knowing there was no way for him to get to his dog.

Veliko said the owner hiked downstream a bit and looked back, seeing that Greta had been swept downstream about 100 feet but managed she get onto a ledge. She was on that ledge when rescue crews arrived.

Veliko said everyone moved swiftly, worried she might make a leap for the shore; she likely would not have made it and would almost certainly be swept under the ice.

The rescue crews set up a rope system with two attendants at the top, while a third crewmember, wearing a dry suit just in case he had to enter the frigid water, rappelled down the cliff to the ledge. The crewmember on the rope placed Greta into a dog backpacking harness typically used for hiking, backed that up with a secure net of climbing webbing, just in case the dog kicked her way out of the harness, and tied it off to his rope.

Veliko said the action was performed “just like the way you do with little kids. You put the subject in front of you,” instead of the way it’s done with adults, who are typically attached to the rope below the rescuer.

One thing rescuers don’t have to worry about when pulling humans out of peril? Sharp biting teeth. That was no problem with Greta, Veliko said.

“Even the nicest dogs, when they’re in that kind of life and death situation, you don’t know how they’re going to react,” he said. “This dog was super sweet.”

By 10 a.m., Greta was rescued; she was cold and shaken but otherwise fine after her ordeal.

Greta’s owner later shared his thoughts with the crew, which was posted to its Facebook page, saying the operation was “incredibly efficient.”

“Bingham Falls, though beautiful, is a very dangerous place in winter and I should have had Greta on her leash at all times,” the owner wrote. “The Stowe Mountain Rescue Team saved Greta’s life. Every team member on the scene was a pro.”

Neil Van Dyke, Stowe Mountain Rescue’s deputy chief and one of its original founders — he’s also the search and rescue coordinator for the Vermont Department of Public Safety’s — noted that, when it comes to rescue efforts involving animals, “it’s either rescue the dog or respond later and rescue the owner.”

Veliko echoed that sentiment: “That’s one of the reasons we go right away, because we don’t want the humans to go after them.”

Greta’s adventure wasn’t the only operation for Stowe Mountain Rescue on New Year’s Day. The crew was called out later that day to help a wayward snowboarder out of the woods after he lost the trail.

At 4:45 p.m., mountain rescue responded to Ranch Valley, off of the southwest side of Mount Mansfield, after the snowboarder took a wrong turn off of the Bruce Trail and ended up on the “Waterfall” pitch.

He was tracking his location with his phone, but that was draining his battery, which was 1 percent power by the time he called 911. Mountain rescue took his coordinates and told him to head down another 100 feet in elevation, where he’d find John’s Road, at the drainage intersection.

After that, the crew went up on a couple of snowmobiles and a tracked ATV, and hiked up the “Easy Out” trail, where they found the lost man, in good condition.

For the second straight year, the long Martin Luther King Jr. Day weekend brought a surplus of skiers and a dumping of snow to Stowe, leading to traffic jams all over town.