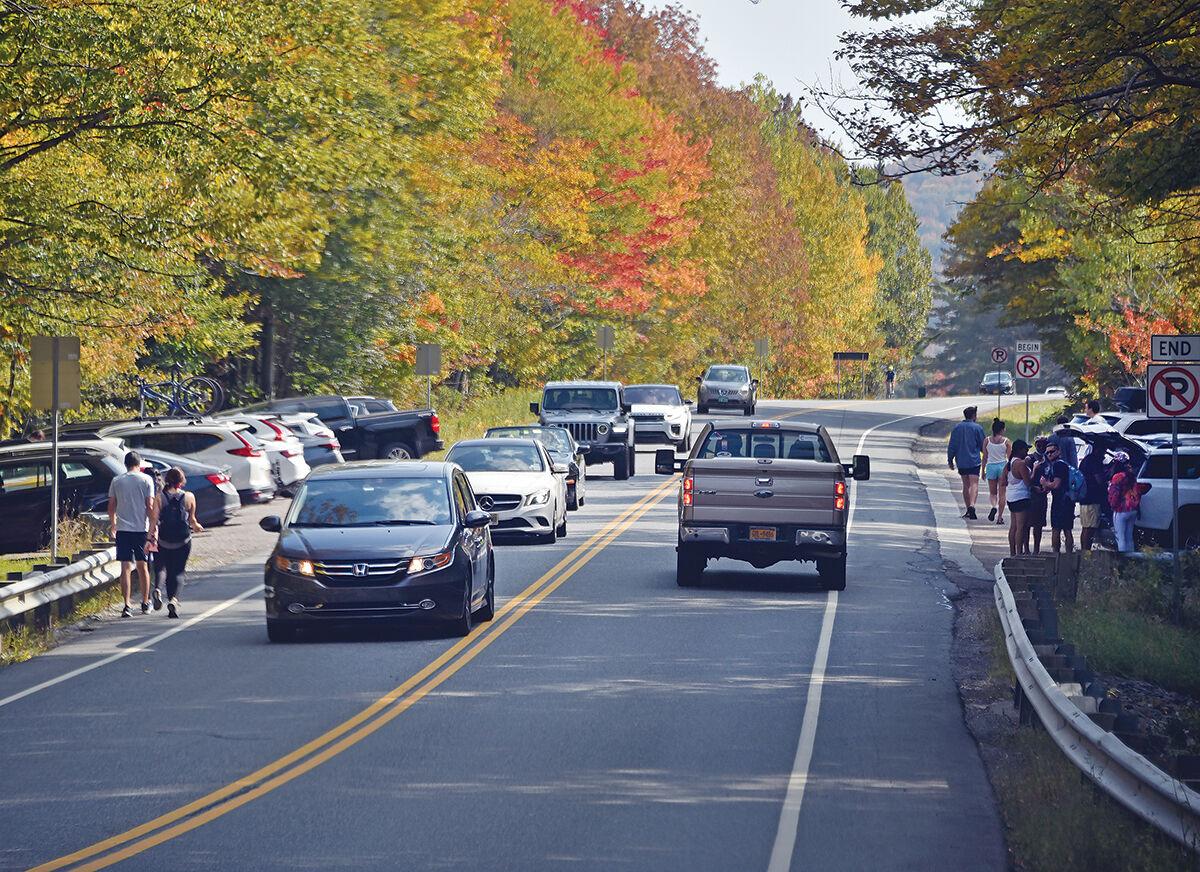 Traffic snarls at Bingham Falls parking along Stowe’s Mountain Road on busy summer and fall weekends. The natural area is popular with visitors and residents and was the site of a drowning death last week. 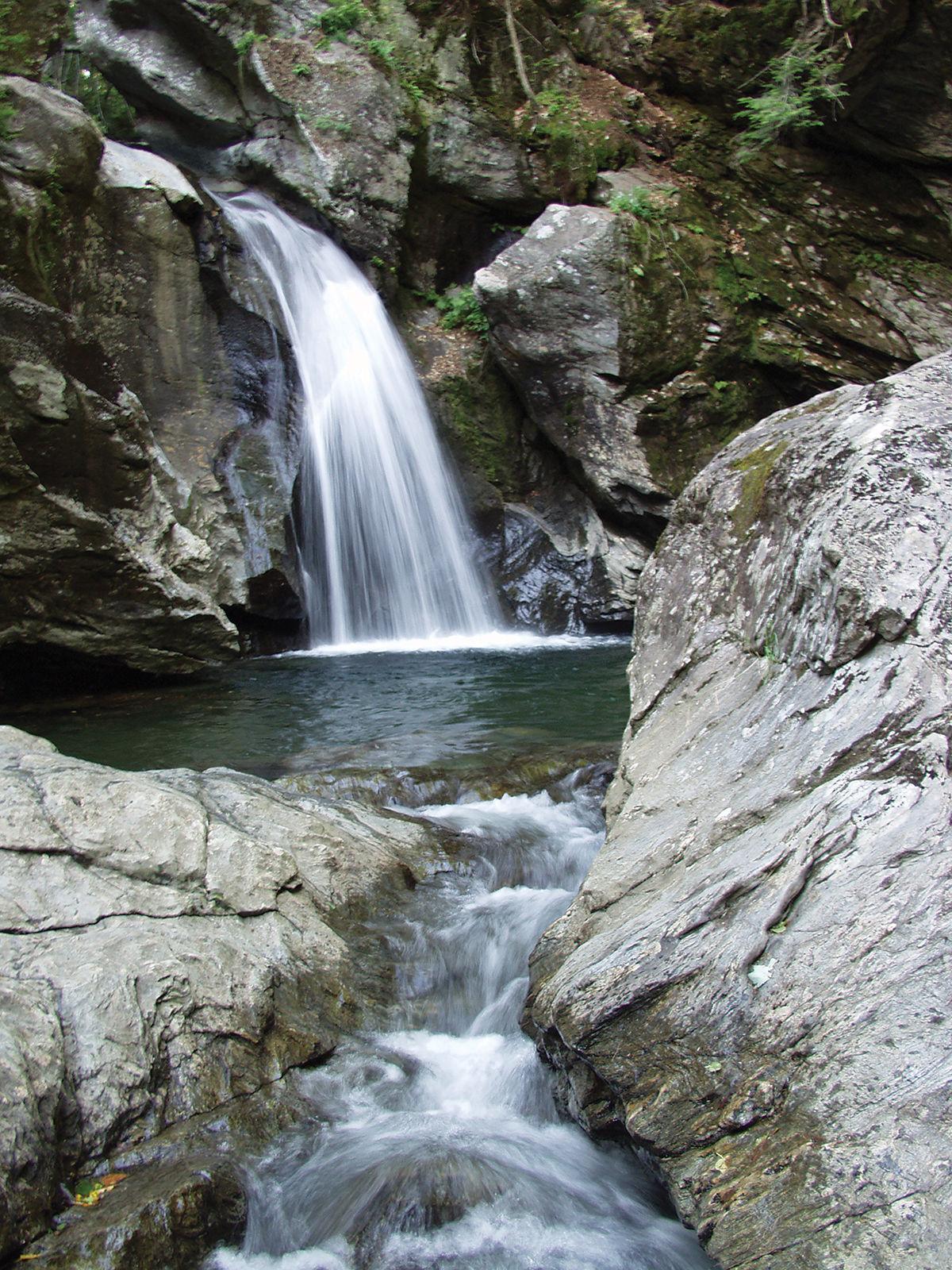 Traffic snarls at Bingham Falls parking along Stowe’s Mountain Road on busy summer and fall weekends. The natural area is popular with visitors and residents and was the site of a drowning death last week.

The drowning of a New York City man in the pool at the base of Bingham Falls last week underlines the dangerous nature of the place, something that might not be evident based on the number of cars with out-of-state license plates that typically line the trailhead at the popular Stowe recreation site.

On Wednesday, Sept. 23, Daniel Davis, 36, of New York City, was walking with his family on the slick, sloping rocks around the main pool at the base of the falls. He slipped and fell into the cold water. According to reports from Stowe Mountain Rescue and Stowe Police Department, another family member jumped in to try and save him, but needed saving herself.

Davis drowned in about 10 feet of water, trapped by the pounding falls.

It was the sixth time that Mountain Rescue responded to Bingham Falls this year. It was the first death there this year and the second in the past four years. All told, first responders have had to transition from rescue operations to body recoveries four times in as many years at some of the the area’s most popular tourist spots.

Doug Veliko, Stowe Mountain Rescue chief, said sometimes there’s just not enough information about the dangers of a popular recreation destination to go along with the information about how great a place it is to visit.

“I struggle with it, to be honest with you, because I’m an outdoors man, and I like doing all of these things. You have to carve out some places that are wild,” Veliko said.

Stowe Mountain Rescue has been busy this year. Among its near-weekly trips into the wilderness, the crew has been summoned 15 times, so far, to three of the most popular — and quietly dangerous recreation spots — in the Stowe area: Bingham Falls, Moss Glen Falls and Smugglers Notch.

That’s nearly double last year, which had eight calls to those locations — seven the year before and five in 2017.

People have died at all three locations in the past three years, two times at Bingham.

Veliko said Bingham and the Notch, in particular, can be dangerous spots for tourists. Mountain Rescue has been on missions six times this year in each of those areas.

“A lot of people visit those areas and they are completely out of their element,” Veliko said. “Beyond the viewing areas, those hazards still exist.”

Bingham Falls is “singular,” he said, because it is much more contained than the sprawling choose-your-own-adventure nature of the Notch, with a clearly delineated access point. And since the half-mile trail down to the falls is fairly easy, compared to other nearby hikes, “it’s the kind of place where it’s usually a serious injury or a death” when first responders are called.

Included in those rescue statistics is a 12-year-old Weimaraner named Greta. She fell into one of the upper pothole-type pools at Bingham on the first day of the year, and was hoisted out, cold but OK, by Mountain Rescue crews.

There was another death this year, on the last day of February, when a Stowe Mountain Resort skier fell from a 200-foot cliff above the Big Spring area of the Notch. Police said the experienced skier was looking over the edge of the cliff when he slipped.

Stowe Police Department detective Fred Whitcomb was the first one on the scene at Bingham Falls last Wednesday.

He said the female family member who jumped in after Davis knew how to swim — earlier reports indicated neither she nor Davis did — but just not well enough to get to him. Another visitor to the falls happened to be a lifeguard, and he was able to get her out, but got so exhausted with the effort he couldn’t get to Davis.

Whitcomb could see Davis’s shadow. He thought about jumping in, too, but he wasn’t equipped for it, and didn’t want to make the problem worse by prompting his own rescue.

“It was frustrating,” he said. “I couldn’t get there.”

Veliko arrived soon after, followed closely by one of the cold-water divers, Drew Clymer, and then the other, Jon Wehse.

Divers are used to dealing with class 4 rapids or worse, but the relatively placid pool at the base of the falls

is deceiving. “There’s a definite hydraulic,” Veliko said, referring to the churning and pulling and pounding caused by the hard-hitting waterfall.

Rescuers couldn’t initially get to Davis and had to use a rescue pole to bring him to the surface. The swimmers then moved him to a safe area, where Stowe EMS attempted to revive him but were unsuccessful.

Davis was taken out of the area using a rope system, and brought back to his family and the medical examiner. He was later pronounced dead at the scene.

Bingham Falls is a 72.5-acre parcel in both Smugglers’ Notch State Park and Mt. Mansfield State Forest. It was acquired by the state in 2001 for $1 million.

The access trail is the only one of the seven main trails in the rugged Notch area — which includes Mount Mansfield and Sterling peak — listed on the Vermont State Parks website as “kid-friendly.”

It’s become one of Stowe’s most popular tourist destinations, with 180 visits per day, on average — the record was 1,431 visitors in one day — according to the Vermont Department of Forests, Parks and Recreation, ahead of a discussion last November about a new management plan for the area. Surveys indicated 85 percent of visitors are from outside Stowe and spend about an hour there, on average.

The “conceptual master plan” addresses conservation issues that have been exacerbated as Bingham has gotten more popular, but it also notes the dangers.

“In general, new visitors to the area are unaware of the uniqueness of this site and the potential dangers that are found surrounding the gorge,” noted a press release on the department’s website last year.

“It’s a tough question, and I think it’s a balancing act, but maybe Bingham Falls is one of those places that needs to be tamed,” Veliko said.

Whitcomb and Veliko have seen their fair share of death in their decades with their respective outfits. They say everyone processes it differently, but it can take a toll.

As far as the actual, corporeal aspects of it, “I hate to say it, but I’m kind of used to the body thing,” Veliko said. The younger people on the rescue team, though, aren’t quite inured to death. What affects Veliko most is seeing the sudden grief that washes over the families.

“I can deal with the nasty parts, the injuries,” he said. “It’s just the implications of it for the family. It’s just hard.”

For the police, after a rescue becomes a recovery, things turn to a death investigation. Often, that means police have to call the family and inform them. It’s never easy, not for the messenger or the recipient.

“They probably aren’t listening to half of what they’re hearing,” Whitcomb said.

He said Daniel Davis came to Vermont with a large family, including his three kids. Most of them were at Bingham last week. They’d escaped the city to Vermont just in time for peak foliage.

“This was a classic example of someone who had come up the day before, had a great day up there, and was up there again taking a photo and, just, slipped,” Whitcomb said.