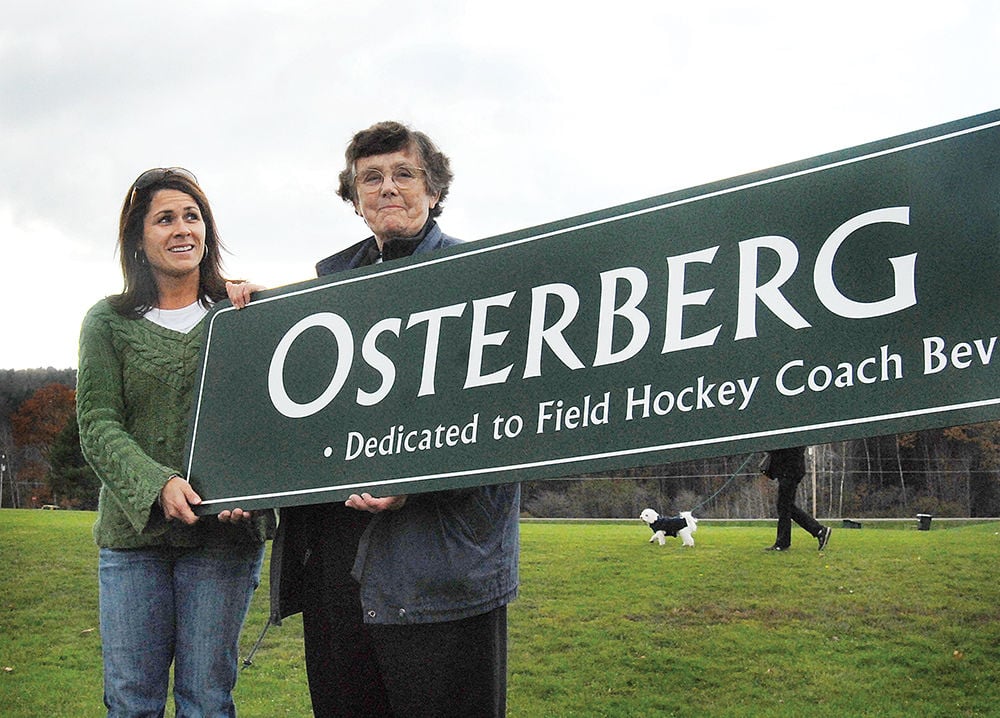 Bev Osterberg smiles as the Stowe High School field hockey pitch is dedicated in her honor in 2011. At left is Joanna Graves, then the Stowe High athletic director. 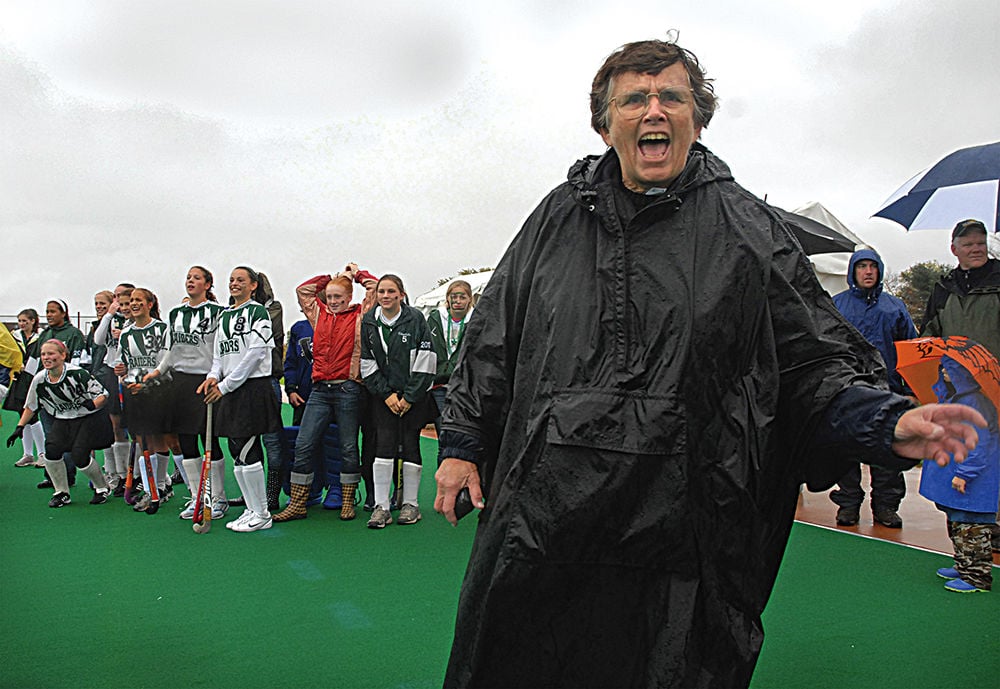 Bev Osterberg in full cry on the sidelines with her Stowe High School field hockey team.

Bev Osterberg smiles as the Stowe High School field hockey pitch is dedicated in her honor in 2011. At left is Joanna Graves, then the Stowe High athletic director.

Bev Osterberg in full cry on the sidelines with her Stowe High School field hockey team.

She was a terrific athlete and a longtime driver education teacher, but Miss O — that’s what everyone called her — was best-known as a coach.

And a terrific coach she was. She established the Stowe High School field-hockey program and coached the team for 44 years. Her teams won 16 state championships — one every 2.75 years — and played for the title 28 times. She was one of five coaches in the nation to reach 500 high school victories.

Her field hockey teams had just one losing season, and at one point won 47 straight games.

But numbers don’t do Miss O justice. She was larger than life for her players. If you wanted to be on her team, you had better get in shape, practice hard, and give your best every moment. If you didn’t, she’d yell at you.

A full obituary will be published next Thursday, March 19. The funeral is tentatively planned for April 3 at 2 p.m. at the United Federated and Congressional Sanctuary in Williamstown.

When news of Miss O’s death emerged on state Rep. Heidi Scheuermann’s Facebook page — Scheuermann was one of her players — memories poured out.

Miss O was tough. If you weren’t trying hard enough, she said so; if you were not up to it, she said so. Failure and losing are life’s best teachers; Miss O wasn’t afraid to let you in on that hard lesson.

And she taught her players to be humble. When her team celebrated its 47-game win streak, she noted that, back when she was playing basketball for Williamstown High School, her team won 104 games in a row.

Heidi Scheuermann reminisced: “Miss O, you were an amazing coach and teacher; one like no other! Indeed, you were tough and demanding. But that is what made us all better — better student-athletes and better people; state champions in fact, in both basketball and field hockey. Thank you for everything, Miss O.”

“I think of her often when I drive by the Stowe High School sports fields (and every time I parallel park),” wrote Anne Economou.

After every season, Miss O sent a handwritten note to the Stowe Reporter, thanking the newspaper for covering her team.

When the field hockey pitch was dedicated in her honor in 2011, she wrote a brief handwritten letter to the editor: “To Stowe High School officials, Booster Club, parents, students, coaches, and friends — I want to thank you for coming to the dedication Nov. 1 at the Stowe High field-hockey field, which was named Osterberg Field. It took place before the game with Rice.

“I was pleased that the Stowe girls won because of the dedication and so many spectators who stayed for the game. Thanks for your support over the years.”

Yet, despite her great record, she got a poor job review and in 2012 was not rehired, after 45 years as Stowe’s first and only field hockey coach. Several times over the years, small groups of parents had organized to oust Miss O from her job, but the efforts were always unsuccessful.

Hundreds of people signed a petition asking school officials to rehire Miss O, to no avail.

“Though we don’t know the exact circumstances of Miss O’s retirement, as alumni and former players of Miss O, we can attest that her coaching style should not be questioned,” wrote Rebecca Condon, Amanda Wood and Olivia DeRienzo, captains of the 2010 field hockey team. “Her success as a coach is merely a fraction of her value as a member of the Stowe High School community. She taught us life lessons while motivating us to be active and have passion for what we do.

“From her coaching, we discovered our own power to achieve, both on and off the field. Miss O is a mentor, motivator, friend and, above all, a coach who will live in our hearts forever.”

Wrote Katrine Wolfgang of Stowe: “Without Miss O’s influence, I am certain I wouldn’t be where I am today, and I suspect Miss O’s influence had much to do with developing my daughter’s self-discipline and work ethic, which is leading her into a career in neuroscience. It is that very ‘old school’ style, the scowls, the growls, the bellowing, the demanding and insisting, which pushed us, not just to win field hockey games, but to dig in, focus, and achieve much more than by rights anyone from a small school in a hedonistic resort town has any right to expect they will.”

As for her coaching style, Osterberg said, “The girls think I made them work hard, but they knew what they had to do and they went out and did it. We got good results.”

“Miss O is an amazing coach and person,” wrote Anna Stackpole Stein after Miss O’s contract wasn’t renewed. “I graduated from Stowe High School in 1984. We won four state championships in a row and were unscored on our senior year. Her influence and dedication to all of us were unsurpassed. We knew her and she knew us, and we were better athletes and people because of her. … Though sometimes harsh, Miss O simply wanted us to reach our full potential. Not for wins, but for personal growth.”

“The schools need more teachers like her, not fewer,” wrote Treva West Southworth, a 1989 Stowe High graduate. “Parents are too quick to pamper their children these days, and they instead ‘protect’ them by complaining that a coach didn’t give them enough playing time. Did that child deserve playing time? If Miss O sat them on the bench, then you can bet they earned that seat themselves.

“I was benched plenty of times, and I knew what I did wrong and I corrected it if I wanted playing time. I didn’t cry to my mommy, who then cried to the principal and athletic director. I was held accountable for my actions, and I appreciate Miss O for caring enough to instill those values in me. If I had been allowed to play when I didn’t deserve to, then what would I have learned?”