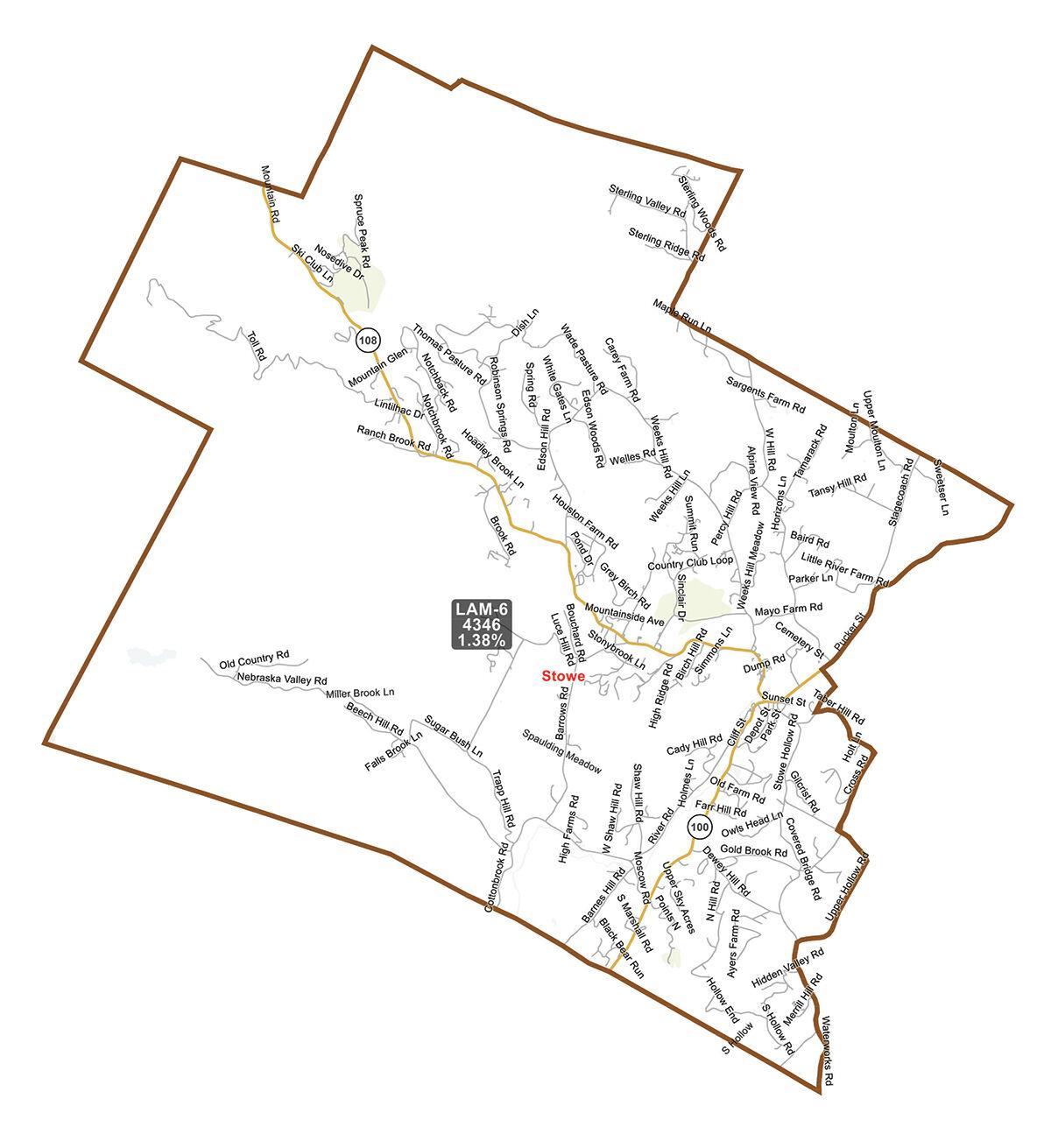 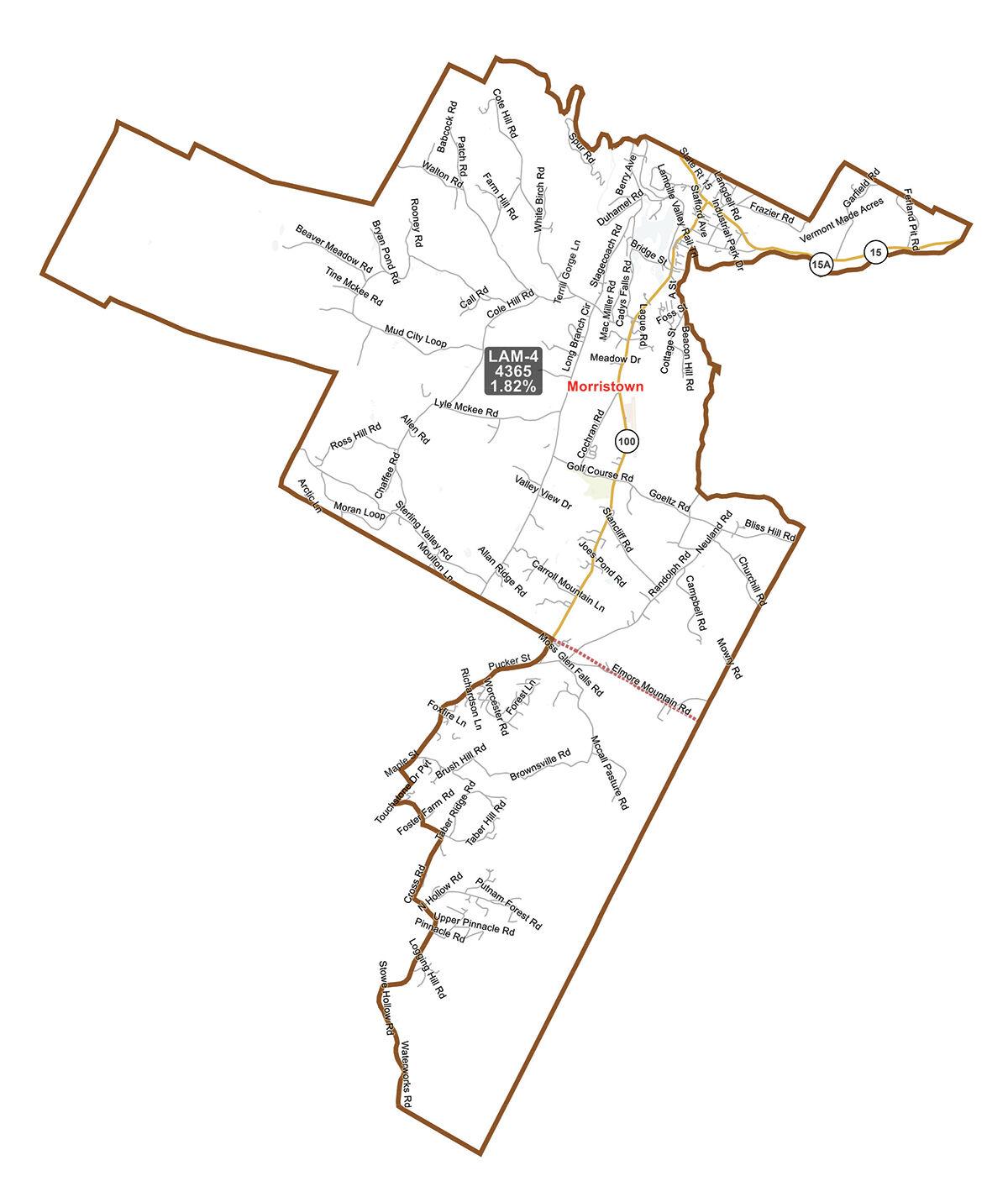 The proposed Lamoille-4 district, which would move part of Stowe into a district with Morristown. 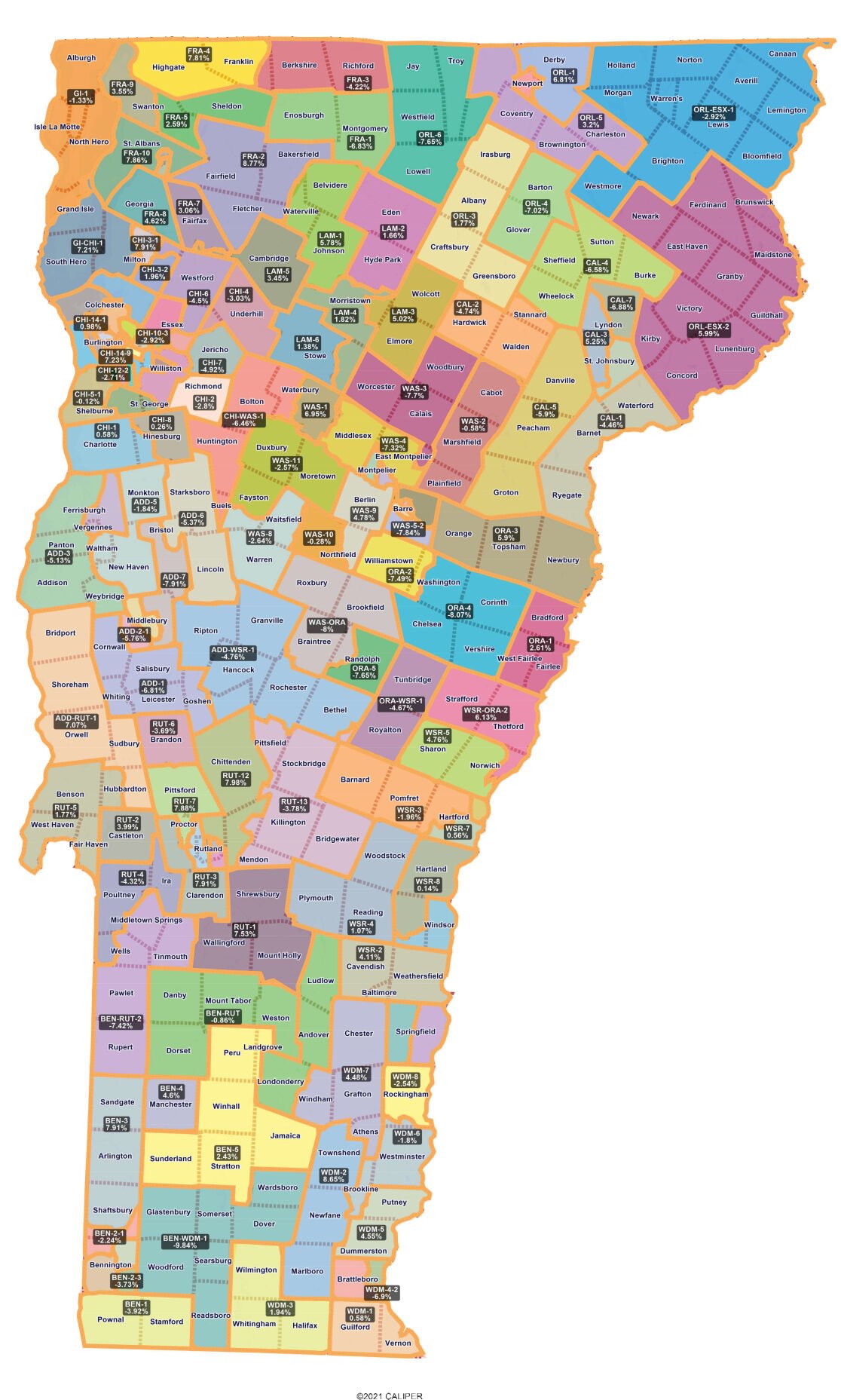 The final redistricting proposal approved by the full Legislature may differ from the Legislative Apportionment Board's plan (shown here).

The Vermont House of Representatives reapportionment proposal, featuring all single-member districts, was approved 4-3 at the apportionment board's Oct. 15 meeting and presented as a draft proposal for feedback.

The proposed Lamoille-4 district, which would move part of Stowe into a district with Morristown.

The final redistricting proposal approved by the full Legislature may differ from the Legislative Apportionment Board's plan (shown here).

The Vermont House of Representatives reapportionment proposal, featuring all single-member districts, was approved 4-3 at the apportionment board's Oct. 15 meeting and presented as a draft proposal for feedback.

The proposed new House legislative district maps are out, and although they are bound to look different six months from now, Stowe is likely to be chopped up, having grown too large in population over the last decade to continue to be a one-person, one-town House district.

The proposed maps also carve up Morristown, excising the two Washington County towns of Worcester and Woodbury from its district and pairing it instead with Elmore and Wolcott, keeping things tidily contained in Lamoille County.

The maps are the result of a year of work for the seven-person Legislative Apportionment Board, which is tasked with crafting the maps and forwarding them on to the Legislature to tinker with, leave alone, or toss and redraw.

With a singular focus on creating single-member House districts, the board narrowly pushed out its work product, 4-3.

Stowe Rep. Heidi Scheuermann, a Republican in a single-member district, could see a portion of her territory — about 875 people in the northwestern Upper Stowe Hollow and Brownsville portion of town — ceded to Morristown, Elmore and Wolcott, should the maps resemble anything like they are now.

“The fact is, because of the population, there is going to be a split,” Scheuermann said. “But I want to be clear that it will be a joint district. Stowe might be a minority over there, but that is not to say that Stowe won’t have an influence.”

Scheuermann is happy the proposed map of the new Stowe-alone district keeps intact the village business district and Mountain Road.

It’s difficult to pin representatives down on hypotheticals such as what the map might look like after it goes through the legislative process. Rep. Dan Noyes, a Wolcott Democrat whose proposed district will change dramatically — goodbye Hyde Park, Johnson and Belvidere, and hello Morristown and Elmore — said he gets similar questions all the time with legislation.

“People ask me how I’m going to vote on some hypothetical bill,” he said.

Noyes, and Dave Yacovone, a Morrisville Democrat whose current district will lose those two Washington County towns, both recognize the House Government Operations Committee, which will do the heavy lifting on the re-apportionment bill, already has two other heavy items on its plate — fixing the state employee pension fund and instituting a retail cannabis market.

“I wouldn’t be surprised to see them not make too many changes,” Yacovone said.

At the same time, Republicans are a small minority in the Legislature, and plenty of Democrats will be itching to save their seats.

“It’ll still be tough to get it through, because a lot of people want to protect incumbency,” Scheuermann said.

The current proposed maps also slice up Morristown, with a new Lamoille-3 district combining the more residential half of the village with the entirety of Elmore and Wolcott, and the new Lamoille-4 district consisting of the rest of Morristown and that 875-person portion of Stowe.

The maps as created would sever the current Lamoille-Washington district and relegate Avram Patt, the Democratic representative from Worcester, to a district that served only Washington County towns.

Patt isn’t a fan of this first proposed map on a purely ideological level, as he firmly supports the option of multi-member districts.

“This very top-down philosophical approach, that every district must be a simple single member district: First, I simply disagree with it. Second, I don’t think that’s going to fly because this creates all kinds of problems in all different kinds of places,” he said.

It would split some larger towns in two, he noted, and pit incumbent representatives against each other, as the proposed Washington district would pit him and Democrat Janet Ancel against one another. Ancel, a lawyer from Calais, is chair of the House Ways and Means Committee and the powerful Joint Fiscal Committee.

Noyes points to another nearby showdown, should the maps remain the same: Waterbury representatives Tom Stevens and Theresa Wood would become competitors rather than seatmates.

After attending the Worcester board of civil authority meeting where they discussed the matter, Patt said he saw some consensus that his town would like to be grouped in a district with other Washington County towns, but that the matter is complicated.

Morristown’s Board of Civil Authority voted 14-1 at the end of October to respond back to the Legislative Apportionment Board with a proposal to keep Morristown whole and combine the proposed Lamoille-3 and Lamoille-4 maps, maintaining a two-member district.

“I don’t want to see Morrisville carved up,” Yacovone said.

Stowe’s BCA also met recently, and didn’t object to the map, noting how difficult it was to create it. One of the seven members of the Legislative Apportionment Board is Stowe resident Rob Roper, the Republican head of the conservative Ethan Allen Institute. Roper and board chair Tom Little are the only two who worked on re-apportionment previously, after the 2010 census.

Scheuermann, like most Republicans and a sizable chunk of the general population, prefers single-member districts.

She said having a sole representative allows that rep to dedicate more time to a familiar constituency. She lives and grew up in Stowe and therefore knows Stowe’s people, places and institutions.

“The fact that people in Morristown can call two people seems unfair,” she said. “In single member districts, you are more accountable to your constituents.”

Yacovone prefers the two-member district model because it allows a tag-team approach to problems. For instance, he might be able to field social services questions better than those about bridges and culverts, something a district mate may have more knowledge about. Two people also know exponentially more people and can better shepherd constituents that way.

“My thinking is that two heads are better than one,” he said. “Especially on state issues that have a local impact.”

Yacovone agreed with Scheuermann that familiarity breeds better results. He said although he has gotten used to serving people in Worcester and Woodbury, it would be easier to represent people in Elmore and Wolcott, where he used to live.

“I’ve built up a lot of familiarity in Worcester. A little less in Woodbury, but when I started, I only knew about four people there,” he said. “It’s always easier for a legislator to represent communities where he or she is better known or where they know those people.”

Noyes’s biggest beef with single-member districts is the consolidation of power away from rural Vermont.

“I think having two reps in a district gives you more of an ability to make sure older Vermonters in rural Vermont have access to services, and to make sure the school model doesn’t leave children in rural areas with less,” Noyes said. “I think the big picture is we are losing rural representation into the northwest, and we are seeing more representation in Chittenden and Franklin (counties).”

Noyes makes his way to his current district towns on a regular basis — for instance, he was at the recent Belvidere board of civil authority meeting regarding the re-apportionment.

But where he lives in Wolcott, he’s less than a thousand feet from both Morristown and Elmore, so it wouldn’t take much of an attitudinal shift to represent those two towns, as opposed to further-flung communities.

“Obviously, I live in Wolcott, so whatever Wolcott is hitched to,” he said.

Aaron Calvin contributed to this report.

The proposed Vermont Senate district map offered by the seven-person board responsible for redrawing the state’s political landscape every 10 years may aim to dilute some of the political clout wielded in Chittenden County, but Lamoille County’s lone senator isn’t much of a fan.