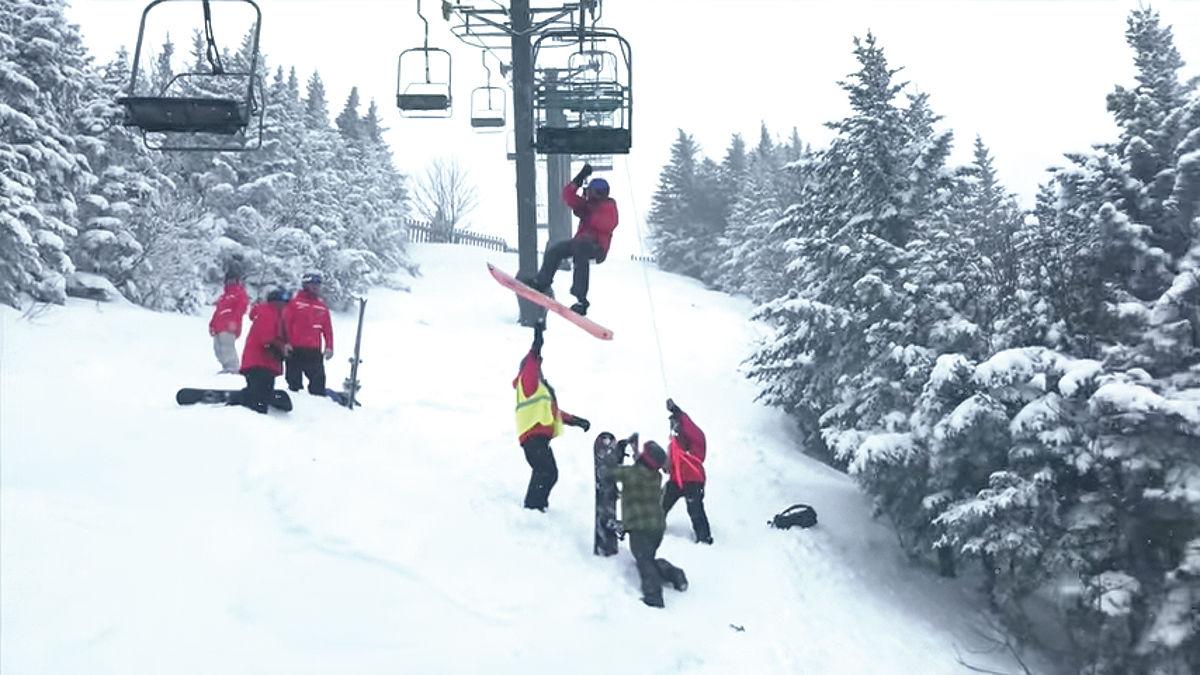 Skiers and riders stranded on Stowe Mountain Resort’s Lookout Double chairlift for more than two hours Sunday are helped down by ski patrollers. Resort staff said an electrical problem stalled the lift around 10:30 in the morning, and everyone was safely down by 1 p.m. 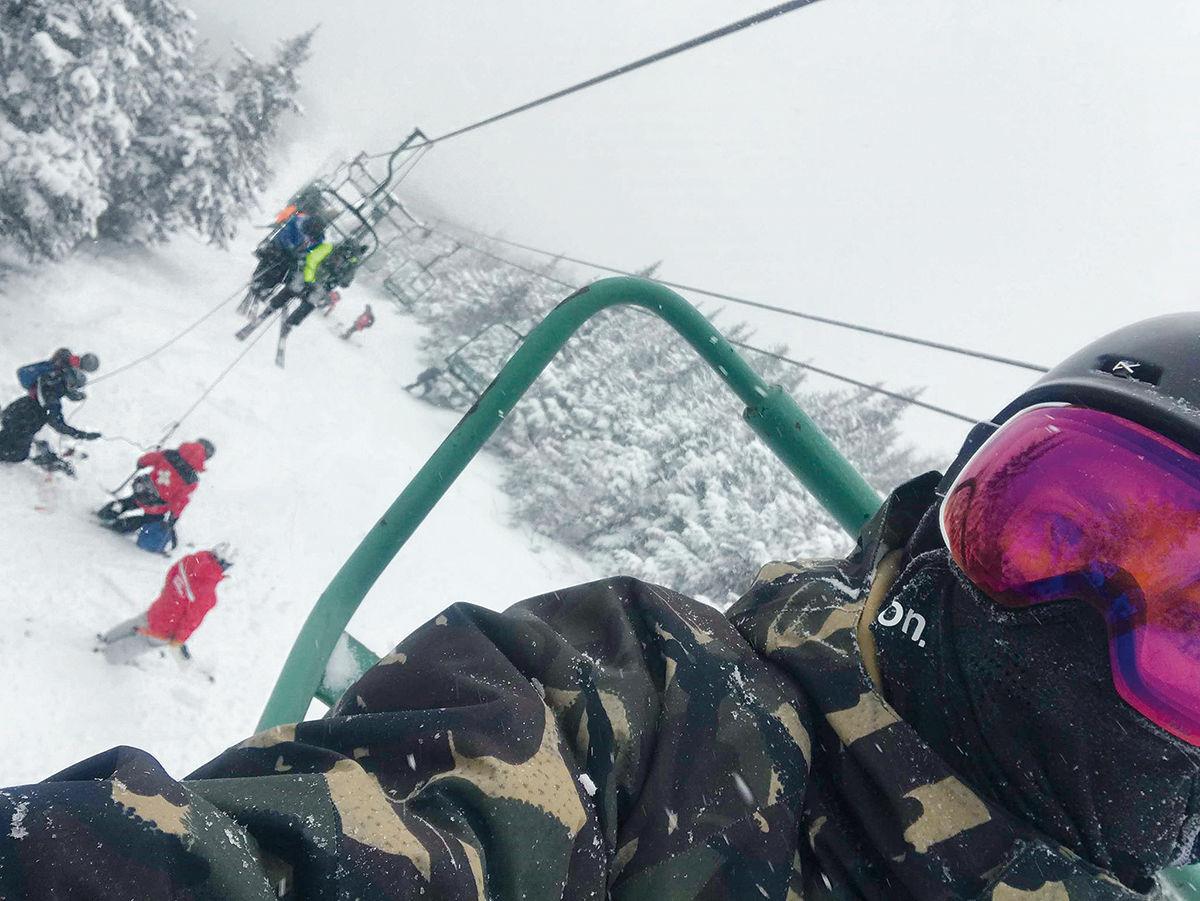 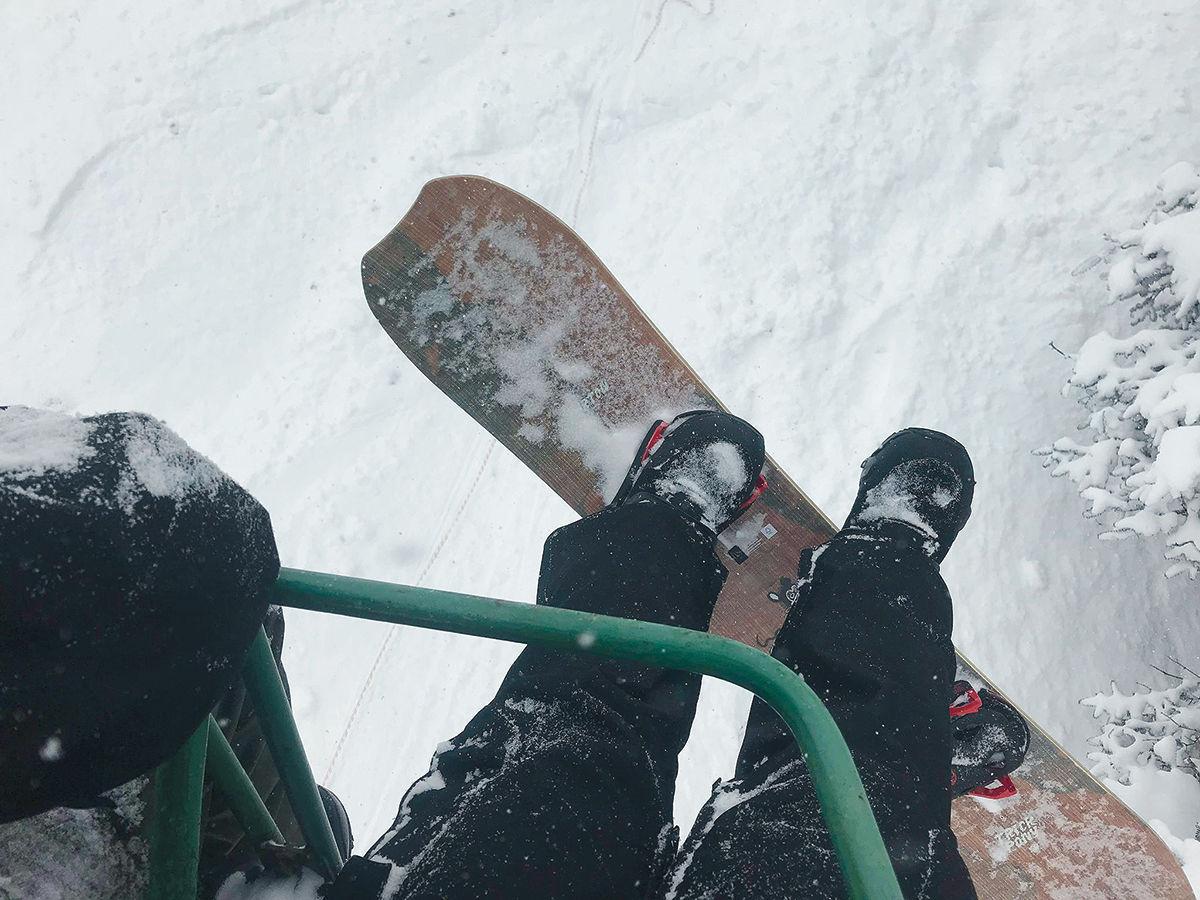 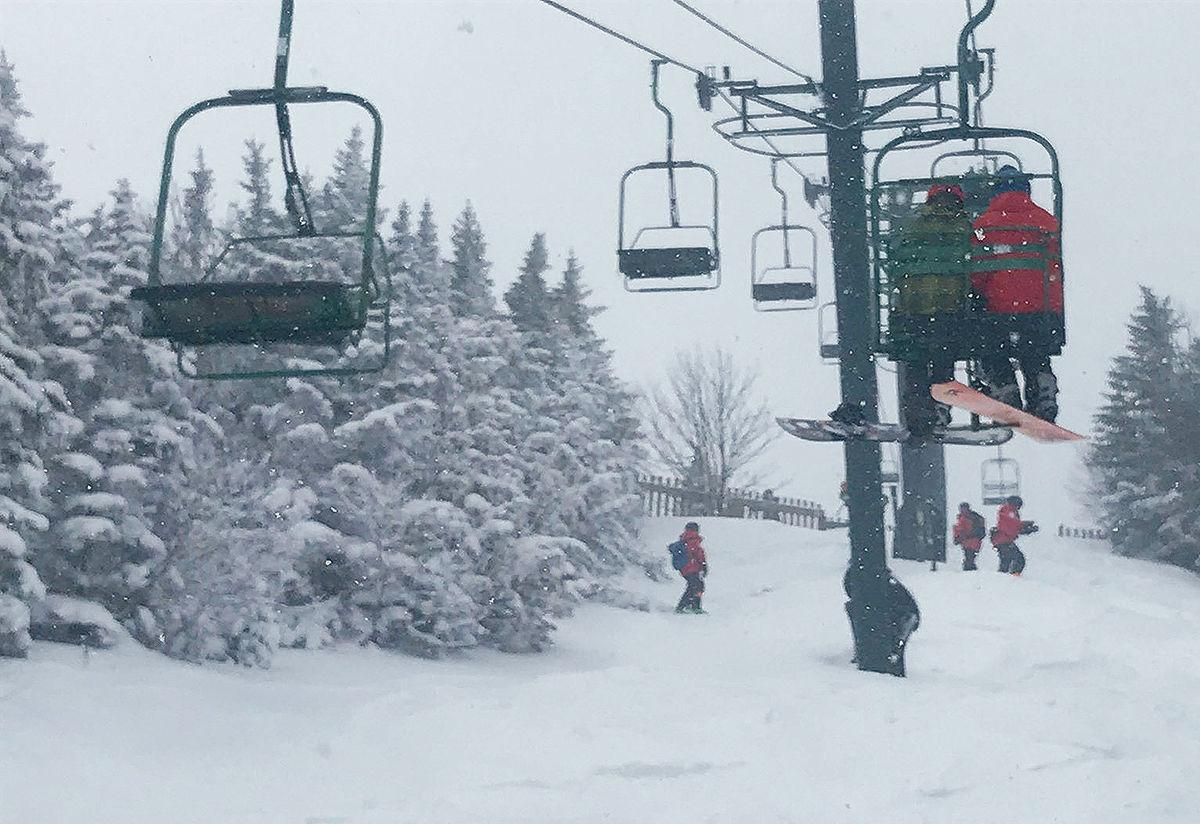 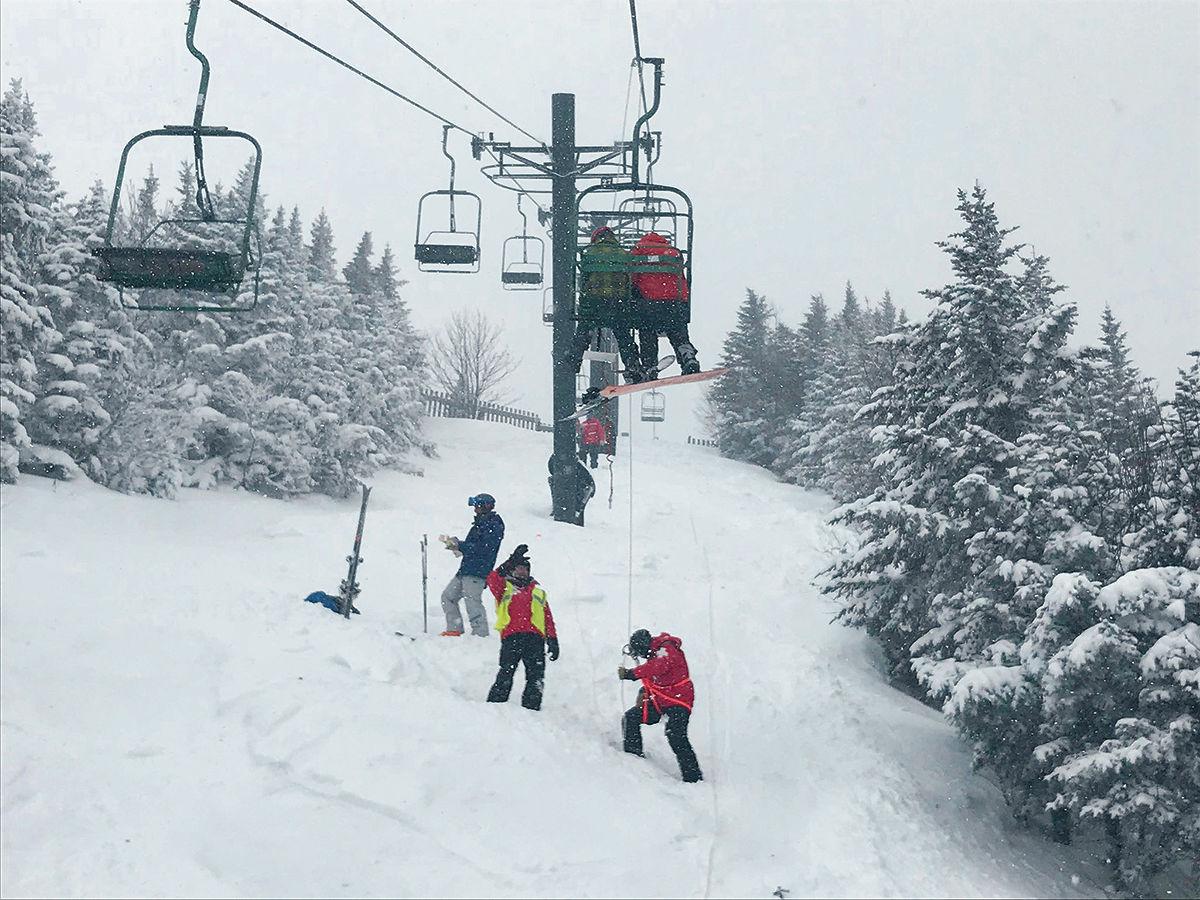 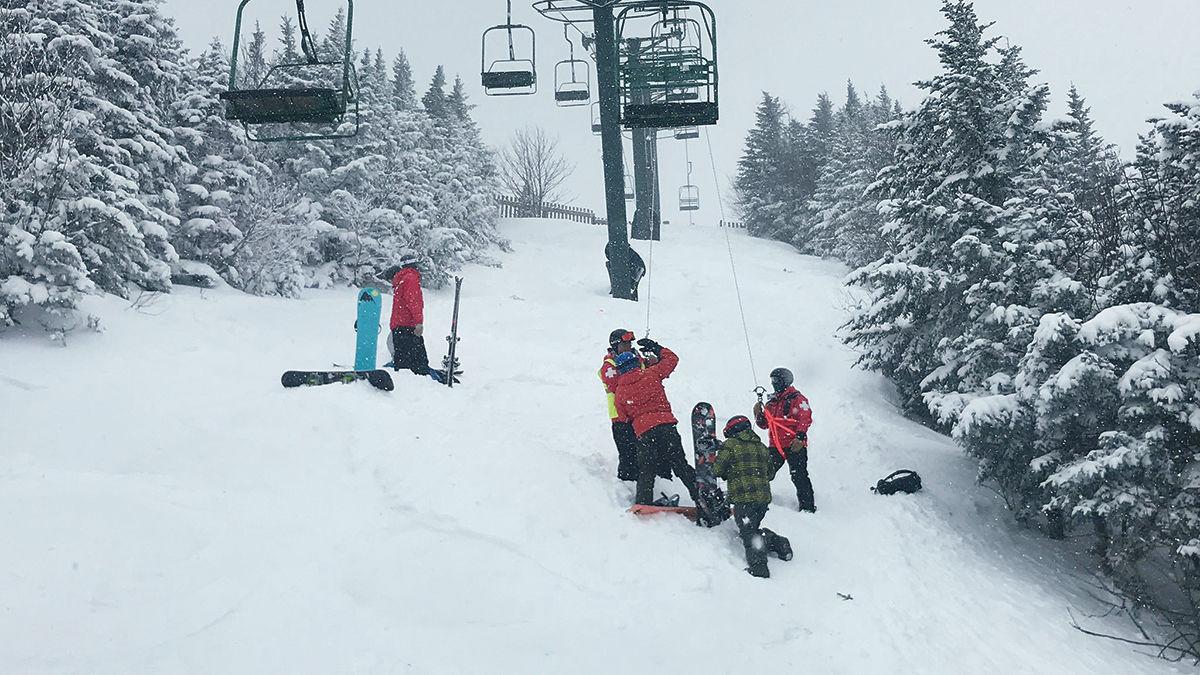 Skiers and riders stranded on Stowe Mountain Resort’s Lookout Double chairlift for more than two hours Sunday are helped down by ski patrollers. Resort staff said an electrical problem stalled the lift around 10:30 in the morning, and everyone was safely down by 1 p.m.

“Check that off the bucket list of s**t I never wanted to do.”

That was Casey Knudsen, a Jericho resident who, along with 160 other skiers and riders, had to be evacuated from a chairlift at Stowe Mountain Resort Sunday.

On a particularly windy day, the Lookout Double chair, the oldest lift at the resort, chugged to a stop, stranding its passengers for over two hours as the resort ski patrol and other staff worked to unload the passengers, one chair at a time.

For Knudsen and his cousin, it was the second run of the day, shortly before 10:30 a.m. Most of the resort’s lifts were on wind-hold, and they opted to take the Lookout Double instead of the nearby Mountain Triple.

The cousins were about 10 chairs from the top when the lift stopped. They sat and waited. And waited. They thought they heard the diesel generator start, then stop. Then start and stop again.

A ways back on the lift, Scott Search of Waterbury was sharing a seat with a friend visiting from Toronto. They’d done the Spruce Peak side of the resort on Friday and the Gondola on Saturday, and “I wanted to show her more of the mountain.”

Search said it isn’t out of the ordinary for the Lookout Double to stop. But after awhile, something seemed sketchy.

“After about 20 minutes, ski patrol came down and asked if anyone was feeling really cold,” he said. He and his friend indicated they were alright, and “from there on out, it’s put the hoods up and get the hands warm and do everything you can, calisthenics when you can, leg lifts.”

Knudsen said after that initial check by ski patrol, he and his cousin didn’t hear anything for a solid hour or so, and then the ski patrol, ski instructors, resort hosts — all hands on deck — came skiing down from above.

“It was like a swarm of bees coming out of a beehive, coming down off the top,” Knudsen said.

There was plenty of grumbling on social media about the situation, along with critical comments about Vail, but the ski patrol and other staff received near unanimous praise online.

Said Search, “Ski patrol did an incredible job with a horrible situation.”

A statement from the resort said, “Stowe Mountain Resort sincerely apologizes for any inconvenience caused to our guests.

“The safety of our guests and employees is our top, No. 1 priority. This is the first time in nearly a decade that we have had to perform a lift evacuation in Stowe and while we hold ourselves to the highest standard of ongoing maintenance and inspections on all of our lifts, sometimes an evacuation is necessary. We have a rigorous annual training program for our ski patrol team to be prepared for such an event to ensure the safety of all involved.

We expect the lift to be fully repaired, inspected and ready to operate for the upcoming weekend.”

An inspector visited Stowe Monday morning, said J. Stephen Monahan, the man in charge of the state’s three lift inspectors at the Vermont Department of Labor.

“Our focus will be why the primary power went down and the backup power source didn’t work,” he said.

Adam White of the Vermont Ski Areas Association said that a lift evacuation “is an infrequent event” at Vermont ski resorts.

“I would go so far as to say it’s rare,” White said Wednesday, echoing that Sunday was the first incident for Stowe in 10 years.

White said Mad River Glen had to evacuate its famous single chair earlier this season, unloading just under 40 skiers in about two hours.

Stowe staff on Sunday offloaded about 160 people in two and half hours.

White said every resort in Vermont trains its ski patrol every year on how to offload people and performs drills throughout the season on all their lifts. In fact, he said Jay Peak was practicing Wednesday on one of its lifts.

“They have it down to a very refined process,” White said.

For Scott Search, it wasn’t even his first time stuck on a chairlift — he was part of a lift evacuation at Burke Mountain in the 1980s. He said the technique was pretty much the same Sunday.

“It was throw the rope over. Kick your skis off and put your foot in the rope,” he said.

Most of the stranded skiers and riders at Stowe Sunday waited patiently for help getting off the lift, but not everyone was willing to sit tight.

Video footage of the evacuation showed at least one skier jumping from the lift. There he goes, dangling boots first, grasping onto the foot rest, then splatting onto the slope, sending up a puff of snow.

“My advice? Don’t jump,” said White said. “I don’t know what it is that motivates people to jump off a chairlift, (but) the risk of injury outweighs any other fact.”

No manner of calisthenics or blowing on your hands was going to keep the cold at bay Sunday. Search said the chairs in front of him were occupied by some kids in skin-tight race suits.

“They looked cold, but they are conditioned to it,” Search said.

Knudsen said he and his cousin were uncomfortable but OK, but he heard one girl got frostbite.

Natural human biological processes also took their toll on some people. In short, when you gotta go, you gotta go.

Knudsen said after two hours, he just couldn’t hold it anymore. He was with his cousin, anyway, so there was little need of modesty there, although “it wasn’t easy” to pee off a lift. The people on the next chair had something to say, though.

For some, the toughest part of the process wasn’t getting off the lift, but getting down the mountain. At the top of the Lookout Double, there are plenty of options for beginner and intermediate skiers and riders, but the lift also goes over some of the tightest, steepest double-black diamond terrain on Mount Mansfield.

Search said his friend is “a decent beginner,” but two hours on a cold lift, combined with the tough terrain, forced them to do a lot of traversing back and forth. At one point, he had her remove her skis and walk parts of the way out.

The resort offered stranded skiers and riders free vouchers, but Search and his friend didn’t stick around to collect them, or to take another run.

Said Search, “We went right to the truck, threw the heat on full and drove to the first place we could find with an Irish coffee and a French onion soup.”

A chairlift that stalled at Stowe Mountain Resort Sunday, stranding 160 skiers and snowboarders, will need to pass an inspection before it can…