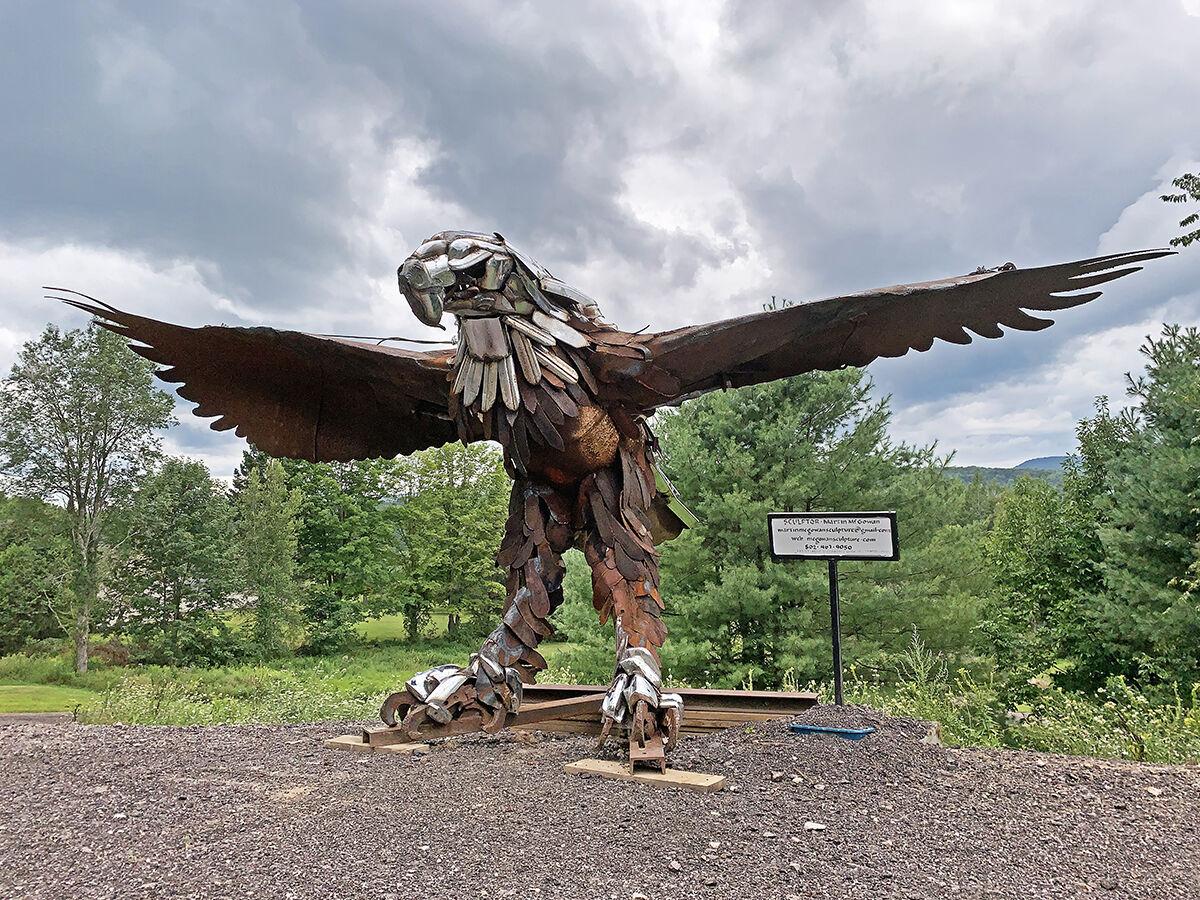 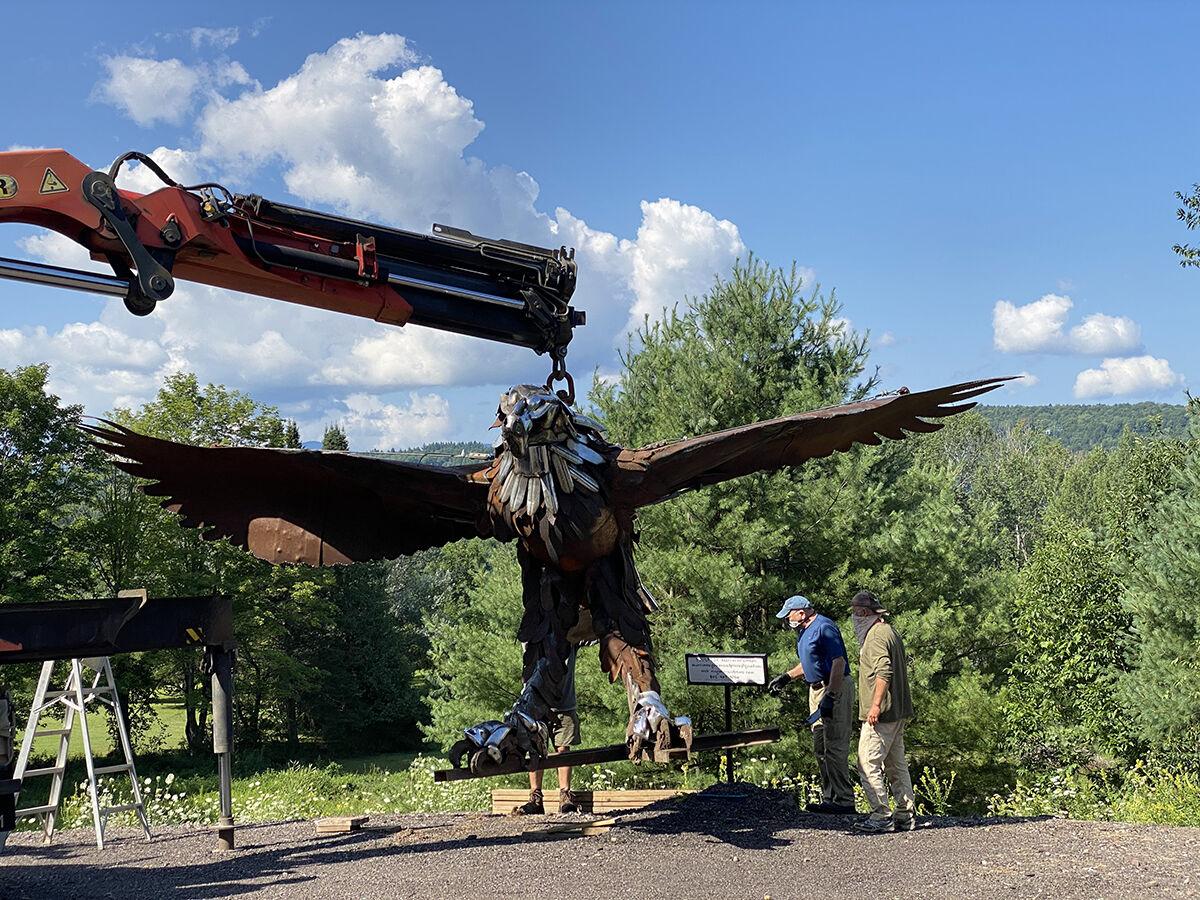 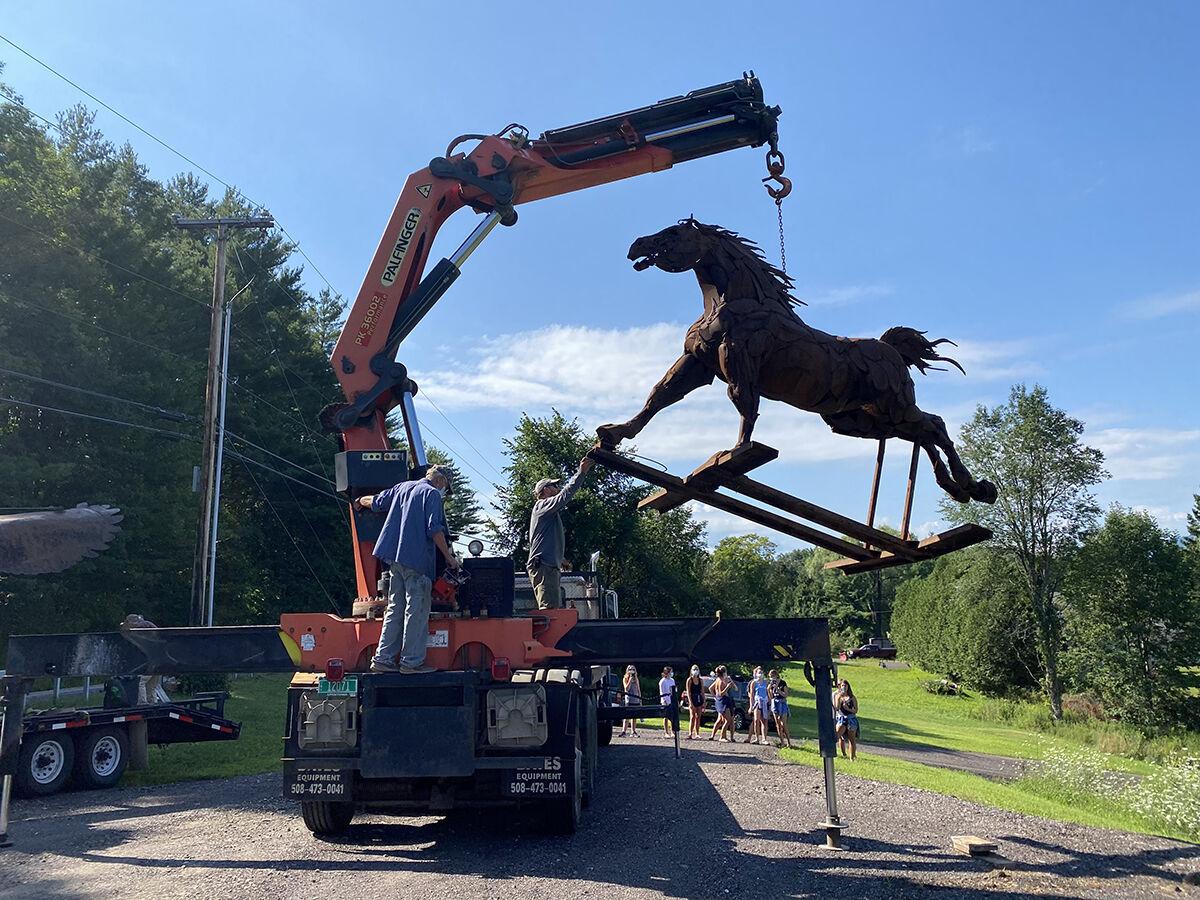 The rusty steed was put out to pasture. 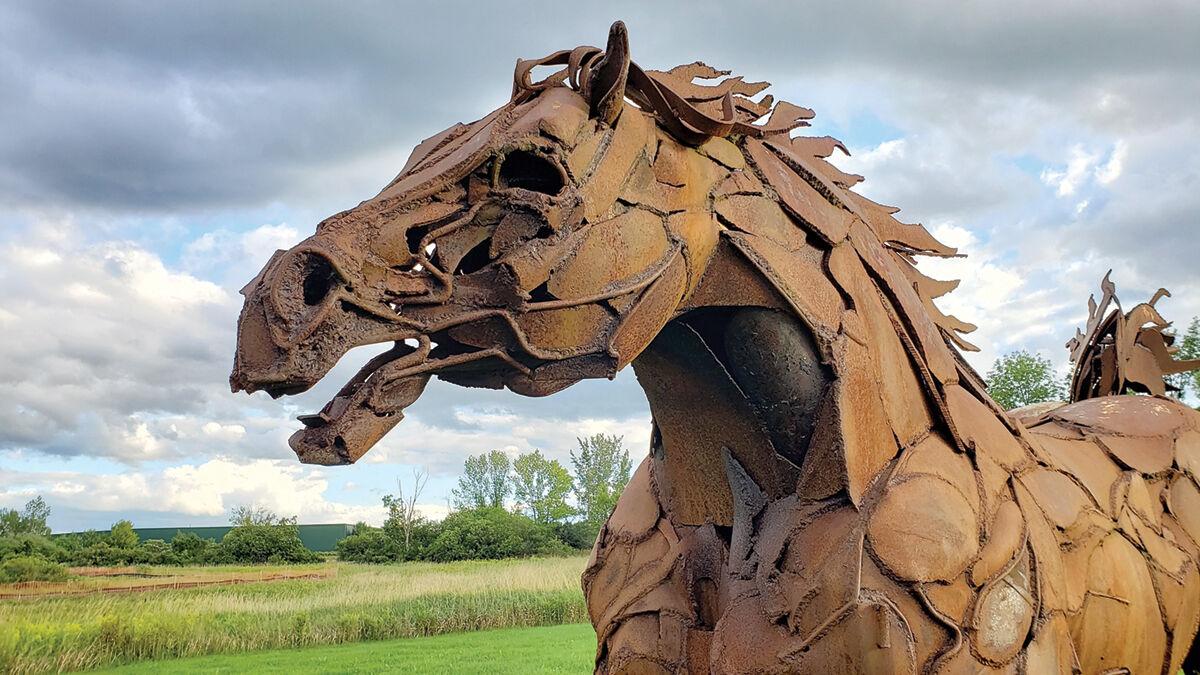 Now in Shelburne, the horse of mythic proportions left its home on Route 100, replaced by a large eagle.

The rusty steed was put out to pasture.

Now in Shelburne, the horse of mythic proportions left its home on Route 100, replaced by a large eagle.

The dynamic rusty steed that used to stand aside Route 100 in Waterbury has been put out to pasture.

Swooping in to replace it is a chrome-domed eagle, perched along one of the busiest stretches of highway in the state.

As for the horse, it’s now taken up residence on Shelburne Green, right next to Fiddlehead Brewery.

Both sculptures are the creation of Northeast Kingdom artist Martin McGowan, who builds them from the scraps of other human industrial detritus.

Standing nearly nine feet tall with a wingspan of just under 25 feet, the eagle is a menacing, powerful sight along the road. It’s located on a gravel pull off on the Waterbury Reservoir side of Route 100.

McGowan said it’s caused more people to stop and pose for photos than the horse did, which is good for him. He wants to sell it for $40,000.

That’s the low end for one of his sculptures.

McGowan also wants his work to be visible to the casual passerby. And its current home, between the interstate and Stowe, has as many eyeballs per car per mile than anywhere else in Vermont.

“It’s not like you’re a singer, where you can just turn up the volume,” McGowan said.

If you’re a sculptor, and you build things meant to stand the test of time and the ravages of Vermont winter, things get a little rusty.

“I don’t think bronzes can compare with the natural effects of steel,” McGowan said in a 2014 interview. “It picks up on the Vermont colors. You don’t have to do anything to maintain the statue (and) it’ll last for generations and generations.”

Since he uses scrap metal, sometimes he has to dip into perfectly functioning machines to finish a piece.

“There’s a history of me never having enough material for my big pieces,” McGowan said. “I usually end up cutting the bumper off of whatever truck I’m driving at the time.”

He was able to craft the shiny, almost luminous head and tail feathers, with accents on the very scary talons, thanks to “this funny guy” who lives near him in Newark.

The funny guy had eight or nine bumpers from classic cars just sitting around.

“He said, ‘I figured if I collected enough bumpers, the cars might come looking for them.’”

And, apparently, at least one drive-by art lover was also a car nut.

“I had this one guy who pointed and said, ‘The beak’s from a ‘67 Chevy Impala,’” McGowan said.

McGowan said the Shelburne Green owner, Graham Goldsmith, saw the steed one day and just had to have it.

Unless Goldsmith sells it, this well-traveled steel equine might just be able to rest, finally.

“It has a really colorful history,” McGowan said.

He originally built it on commission for a buyer in Colorado. It was supposed to be one of three horses, all in different positions of trapped movement. He took inspiration from the photographs of Eadweard Muybridge, who, in 1878, managed to portray a horse in full gallop through a series of still shots set up along a California racetrack.

The three steeds were supposed to appear magically bursting out of the buyer’s wall, “a Harry Potter kind of thing.”

Problem was, this was just before 2008, when the housing market crashed. The buyer reneged, and only that one horse was built.

“That was right before the market went belly-up, so I was stuck with this sculpture no one wanted,” he said.

The horse was first placed in Newark, the Northeast Kingdom town where McGowan lives and works. Then someone suggested the Watertown Farmers Market, on the Charles River in Massachusetts. After a few years there, it came back and lived at a farm stand in Waitsfield.

It actually had two stints at the Route 100 location, starting in 2014 for a few years before being moved to Shoreham. But Eric Chittenden, the owner of the Waterbury Center property, well, “Eric called me up and said, ‘I miss it a lot.’ I said, ‘Why not?’, and we moved it back.”

They managed to sneak it in just before the ground froze last December.

For his next work of art, McGowan isn’t contenting himself with just one animal. He’s working on “this crazy chimera,” the beast from Greek Mythology with a lion’s head, a goat’s body and a serpent’s tail.

Question is, will it have the same Odysseyian journey as his steel steed?