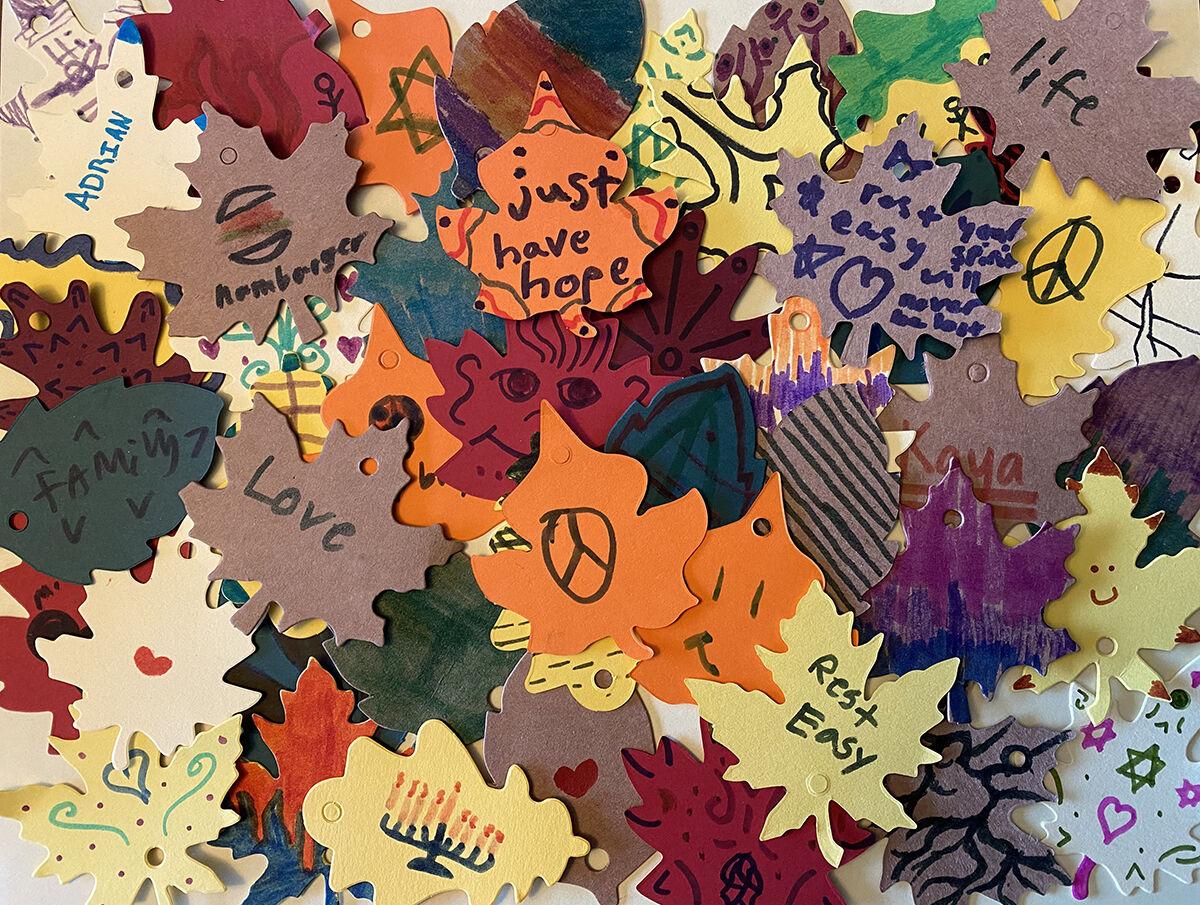 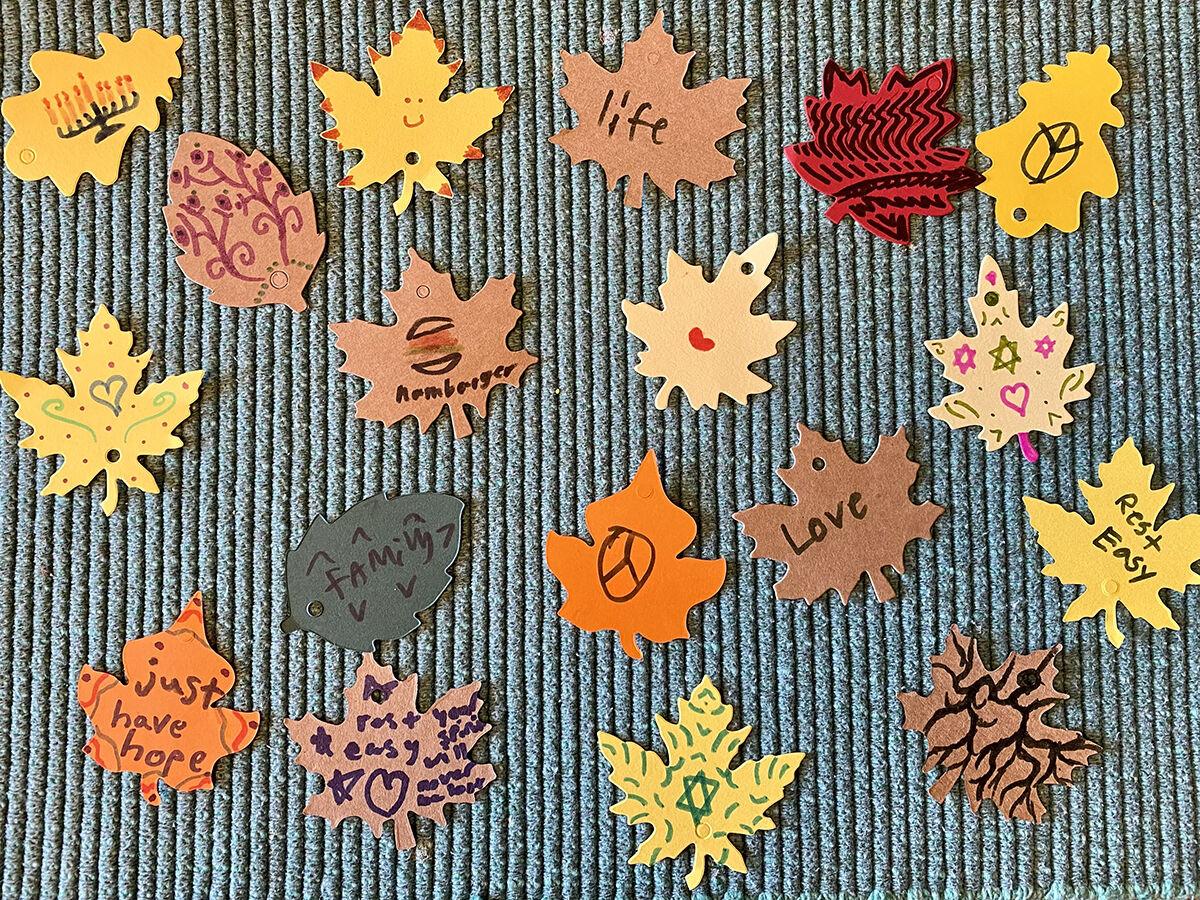 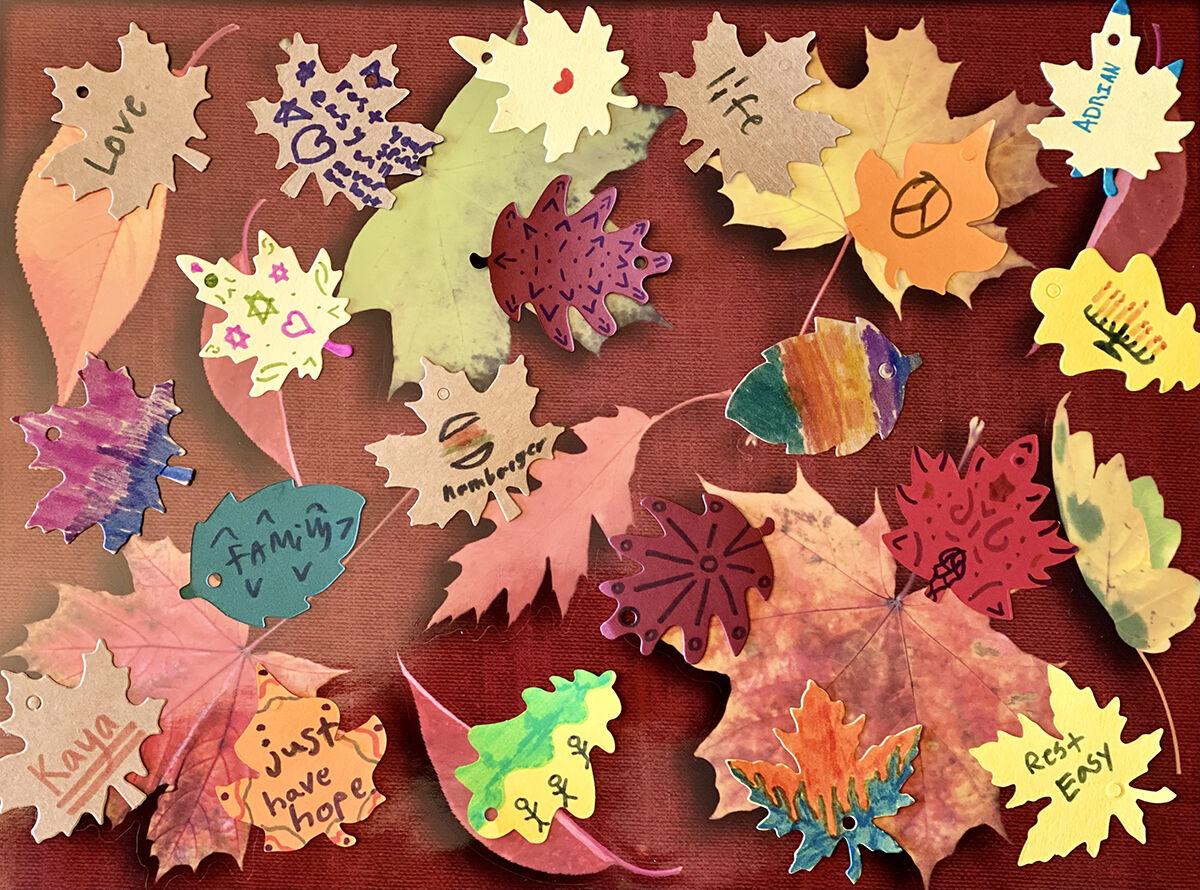 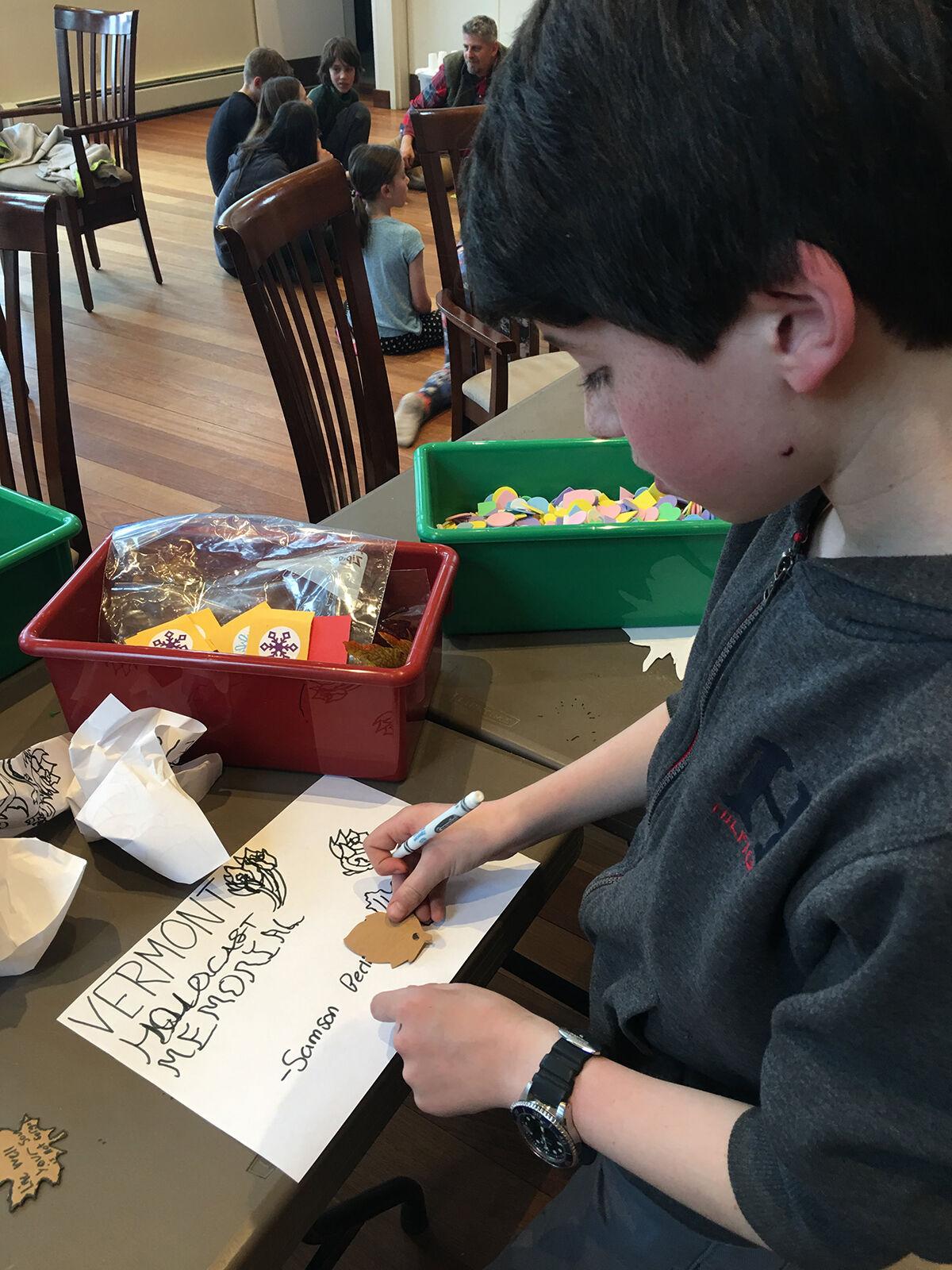 A Stowe youngster prepares a leaf as part of the Vermont Holocaust Memorial’s Leaf Project, which aims to honor and remember the 1.5 million children killed during the Holocaust. 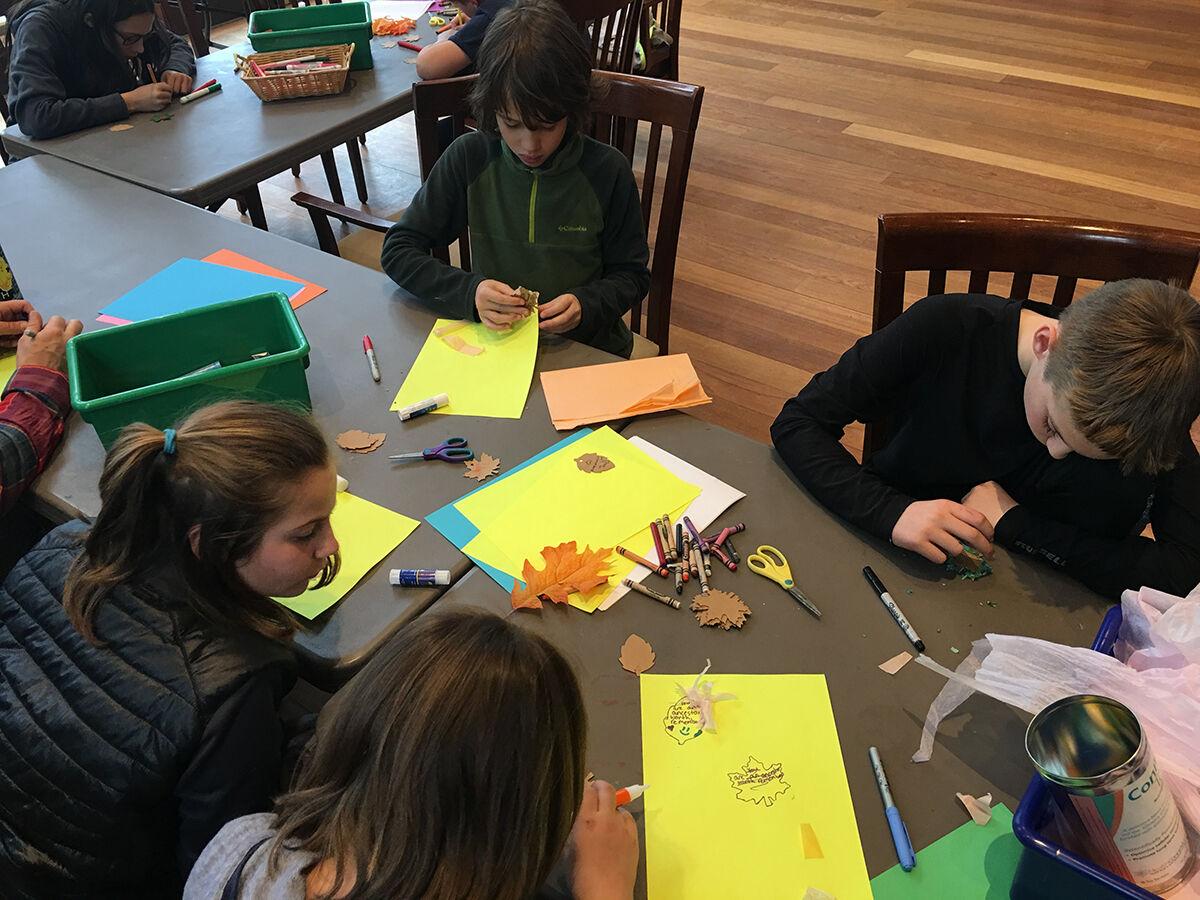 Local kids prepare leaves as part of the Vermont Holocaust Memorial’s Leaf Project, which aims to honor and remember the 1.5 million children killed during the Holocaust.

A Stowe youngster prepares a leaf as part of the Vermont Holocaust Memorial’s Leaf Project, which aims to honor and remember the 1.5 million children killed during the Holocaust.

Local kids prepare leaves as part of the Vermont Holocaust Memorial’s Leaf Project, which aims to honor and remember the 1.5 million children killed during the Holocaust.

That’s the word that Debora Steinerman uses when discussing the number 1.5 million.

For Steinerman, the term unfathomable is fitting because that’s how many children were killed by the Nazi regime during the Holocaust, eight decades ago as World War II raged across the globe.

1,500,000 children killed, just a portion of the more than 6 million Jews killed during the Holocaust.

“No one can really fathom that number, it’s unimaginable that 1.5 million children were killed,” she said.

The Leaf Project aims to demonstrate, and emphasize, that unimaginable and unfathomable total of 1.5 million children killed in the Holocaust. Its goal is for people, mainly children but anyone can participate, to learn about the Holocaust while also crafting leaves in different mediums honoring each and every one of the children killed by the Nazis.

“I’ve personally seen kids participating in the Leaf Project,” Emily Rosenbaum, the president of the Jewish Community of Greater Stowe board of trustees, said. “It’s a really powerful way for them to understand the ramifications in an age appropriate way.”

Ultimately, the Vermont Holocaust Memorial hopes to collect and memorialize each and every one of those 1.5 million leaves.

“We’re going to try to collect that number,” Steinerman said. Thus far, her organization has collected just under 1,000 leaves. Most have come from schools and groups in Vermont but they’ve also received leaves from as far away as Texas and even overseas from Holland.

They want to focus on education in Vermont though, Steinerman said, and it’s still a long road to 1.5 million, particularly in a state with a population that’s less than half that total.

“It’s a long way to 1.5 million, but that’s the point. Who can imagine 1.5 million children being killed? And that’s just the children,” Steinerman said. Demonstrating the vast scale upon which the Nazis implemented genocide, tearing families apart and destroying millions upon millions of lives, is “the biggest part of the Leaf Project.

“Personally, I lost a number of young cousins that I never got to know. Just babies,” Steinerman, whose mother is a Holocaust survivor, said. “I am the child of a survivor. My mother was in hiding. Her father was killed, her uncle was killed, her cousin was killed.”

Many children were killed as soon as they arrived at concentration or extermination camps, she said. Or, they were experimented on or used as forced labor until they died of starvation or disease.

“Each of those children were people. They had names, they had lives ahead of them,” Steinerman said. “Like each unique leaf, each child was unique. These leaves are memorials to those who were lost.”

Because the Leaf Project has such lofty, and long-term, goals there is no end date for it. The Vermont Holocaust Memorial will continue it forward until the goal of 1.5 million leaves is reached.

That Leaf Project is part of the larger mission of the Vermont Holocaust Memorial, she said, which is to further education about the Holocaust as a means to help create “a time where there will be respect for all.”

“We’re a very small organization,” with no current physical home, Steinerman said, but “we do whatever we can to bring Holocaust and genocide education to Vermonters.”

That mission becomes more and more important every day, she said, particularly with recent studies and surveys showing that many younger Americans have almost no knowledge about the Holocaust, and the atrocities that took place during it.

Without initiatives like the Leaf Project and other ways of teaching the history of the Holocaust, “this history is going to be forgotten.”

“We need to find ways to bring this education to our schools, our students,” Steinerman said.

Along with the Leaf Project the Vermont Holocaust Memorial supports and offers a number of different educator workshops and other resources to help schools and other organizations spread knowledge about the Holocaust.

They’re even working on speaking virtually in schools this year, continuing to spread their message during the time of COVID, and leaves can now be submitted digitally.

Steinerman said that, for those interested in participating in the Leaf Project while learning more about the Holocaust, they recommend creating leaves in mediums that will last and stand the test of time.

“Most leaves so far are cardboard, paper or felt,” she said. “We’d like them to look like leaves from a tree,” but they often have some type of writing — a saying or even a name of someone killed — on them.

Lesson plans to pair with the Leaf Project and the stories of survivors and victims of the Holocaust are available on the Vermont Holocaust Memorial website, she said, to help teachers or group organizers who are planning a leaf-making session prepare.

“It’s a way to learn more about the background. Talk about the families, the lives affected, to avoid it happening again. And then send the leafs to us,” Steinerman said. She and other founders of the Vermont Holocaust Memorial who are also the children of survivors have also shared their own family stories as further first-hand learning accounts.

More information about the Vermont Holocaust Memorial and the Leaf Project at holocaustmemorial-vt.org.