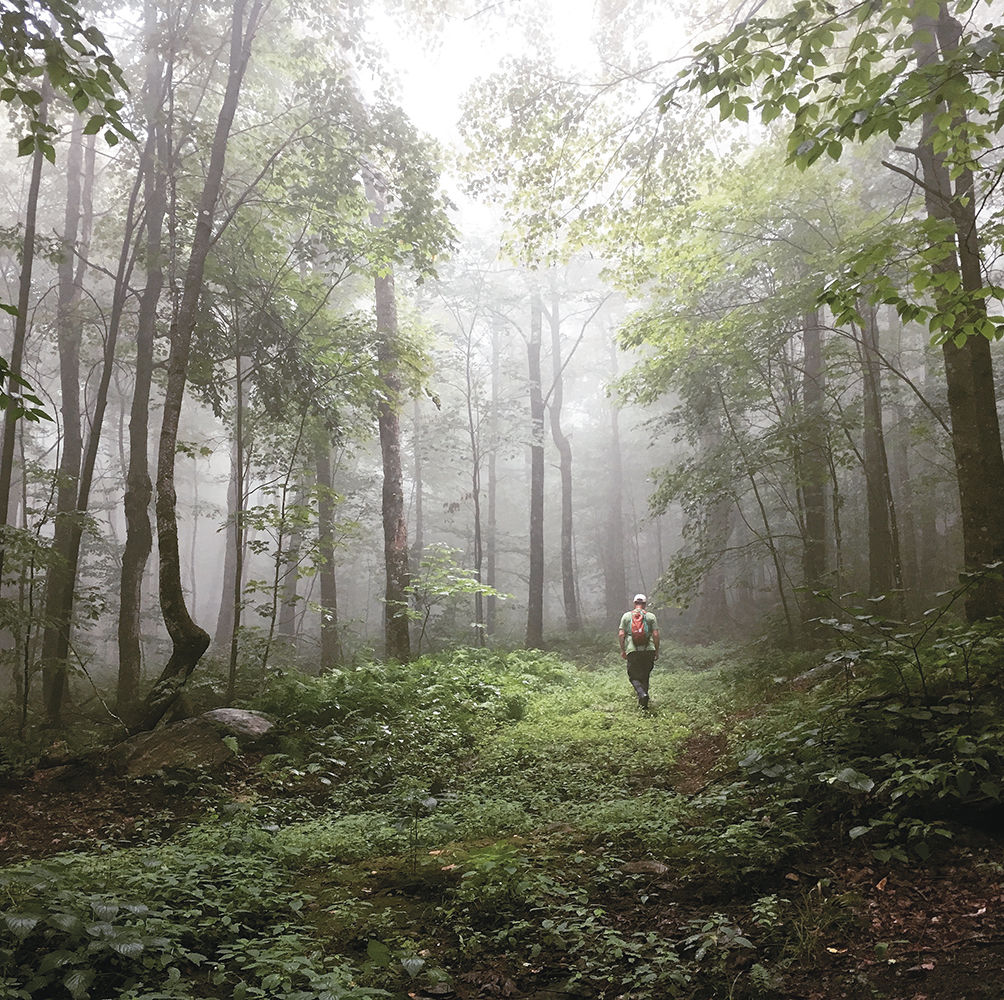 A hiker treks through the forest somewhere between the end of Brownsville Road and the Putnam State Forest in Stowe. Stowe Land Trust is closing on a deal to buy and conserve the 750-acre tract. 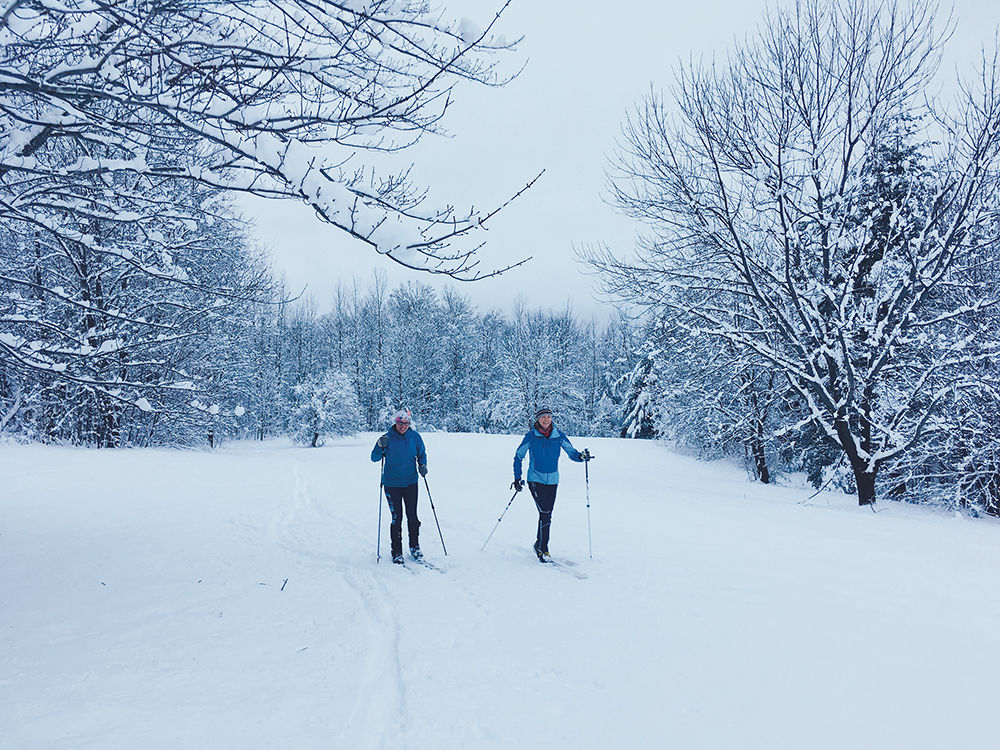 If the Stowe Land Trust can raise the final 10 percent needed to buy the 750-acre Brownsville forest, it will be the Land Trust’s largest purchase — in both acreage and cost — since the organization was founded in 1987. 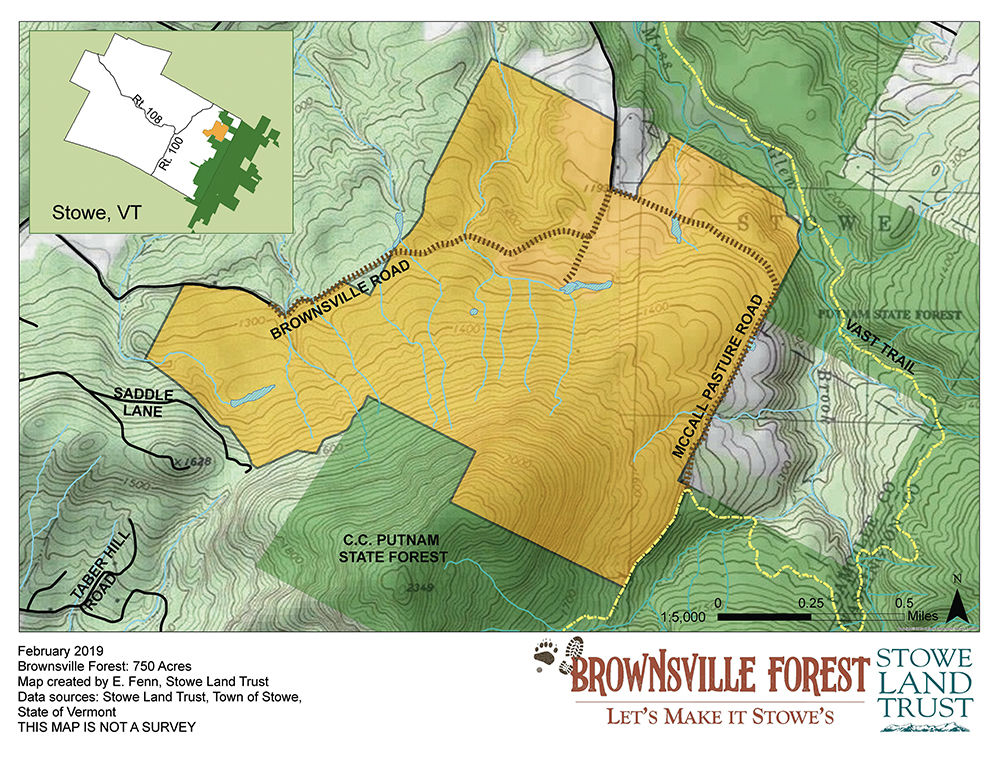 A hiker treks through the forest somewhere between the end of Brownsville Road and the Putnam State Forest in Stowe. Stowe Land Trust is closing on a deal to buy and conserve the 750-acre tract.

If the Stowe Land Trust can raise the final 10 percent needed to buy the 750-acre Brownsville forest, it will be the Land Trust’s largest purchase — in both acreage and cost — since the organization was founded in 1987.

Stowe Land Trust is close to securing the money to buy the largest unprotected tract of private forest in town, and hopes to have it forever conserved for the public.

The 750-acre parcel at the end of Brownsville Road is bordered by thousands of acres of state forest, and is part of the foothills of the 45,000-acre Worcester Range.

Stowe Land Trust announced last week it has received a $5 million gift from an anonymous donor through the Vermont Community Foundation toward the purchase of the property.

The land trust has the property under contract, according to land trust director Kristen Sharpless, who said the gift puts the land trust 90 percent of the way toward its purchase price.

“We have an amazing, once-in-a-lifetime opportunity to conserve this outstanding property for our community,” Sharpless said. “This is the last conservation project of its kind that could happen in our town. It is truly exceptional to have everything coming together to make it possible.”

Once purchased, the land trust plans to transfer the Brownsville property to the state of Vermont as an addition to the adjacent C.C. Putnam State Forest. It will be open and available to the public for non-motorized recreation, subject to a conservation easement held by the land trust and a management plan which will be prepared with an opportunity for public comment.

The property is listed by its real estate agent at just under $10 million, but the land trust negotiated a deal with the owners to buy it for just over half that. The land trust has to raise $750,000 more before the scheduled July 31 closing date, which will be the goal of a spring fundraising campaign. That amount includes $250,000 in project costs and contribution to the land trust's stewardship endowment.

The property is owned by the niece and nephews of the late Genevieve Story, whose husband, Christopher, purchased the property for her as a gift in 1950. Last year, that niece, Nancy Hughes, told the Stowe Reporter she recalled visiting their aunt and their grandmother at the Brownsville property in the summers. She said she and her brothers have fond memories of the land, including luscious raspberry patches and bountiful wildlife.

Hughes said her aunt and grandmother wanted the property to be conserved, rather than developed.

“After my aunt passed away in 2011, it has been our family’s hope to keep the land as is for the future and to honor our aunt’s and grandmother’s legacies,” Hughes said. “It has been a very difficult decision to sell, but now it is our family’s wish for others to enjoy it as much as we have.”

According to Sharpless, the $5 million anonymous donation is the largest grant from a donor-advised fund at the Vermont Community Foundation in its 33-year history.

If the land trust can raise the final 10 percent needed to buy the property, it will be the Stowe Land Trust’s largest purchase — in both acreage and cost — since the organization was founded in 1987.

It would join such large forest tracts as the 10,000 acres of Burt Lumber Company land transferred to Mount Mansfield and C.C. Putnam State Forests in 1979; the town’s purchase of the 1,000-acre Sterling Forest in 1995; and Stowe Land Trust’s own protection of Cady Hill Forest in 2012.

“The Story property has been on the land trust’s radar as an irreplaceable area important to our community since the organization got started. It’s terrific to be at a point now of being able to work with Ms. Story’s family to protect the property and reopen it to the public,” said John Merrill, founding and emeritus director of the trust.

According to Sharpless, conserving Brownsville is part of the land trust’s “Keep the Worcesters Wild” initiative, which seeks to protect some 2,000 acres of forest in Stowe, Middlesex and Worcester. It also includes the Shutesville Hill Wildlife Corridor, which straddles the Waterbury/Stowe town line.

All told, the campaign seeks to raise $10 million and protect 3,000 acres.

The land has been posted for the past several years, which would change after the land trust buys the property.

“Those posted signs will come down and people will be able to come out there again,” Sharpless said.

According to Sharpless, before the Story family owned the property, it was a collection of hill farms, including one owned by the Brown family — that’s where Brownsville gets its name.

Now, there’s still some of that history to be seen for those willing to explore the tract — stone walls, scattered sap buckets and old plough furrows.

Some people shared their memories of exploring the Brownsville property back before the posted signs went up. The land was used for hunting, horseback riding, mountain biking, cross-country skiing, hiking and walking and more. There’s a lot you can do on 750 acres that bumps up against thousands more.

Two miles of Class 4 roads pass through the property, connecting to the VAST trail and providing access to all that state land.

Stowe select board member Neil Van Dyke said he used to go backcountry skiing on and around the property.

“I believe the Story property purchase will go down as one of Stowe’s most exciting and important land conservation projects,” Van Dyke said.

An avid birder, Liz Lackey credits exploring the property’s woods, beaver ponds, and old pastures as a child in the 1960s with her appreciation for nature.

“This property is such a gem,” she said. “I am thrilled that it will be protected, and I hope that it will continue to inspire similar passions for wildlife and natural places in future generations.”

Brownsville forest offers a glimpse at biking’s past

Sometimes, the outlaws become the heroes, the clandestine operators the tour guides.