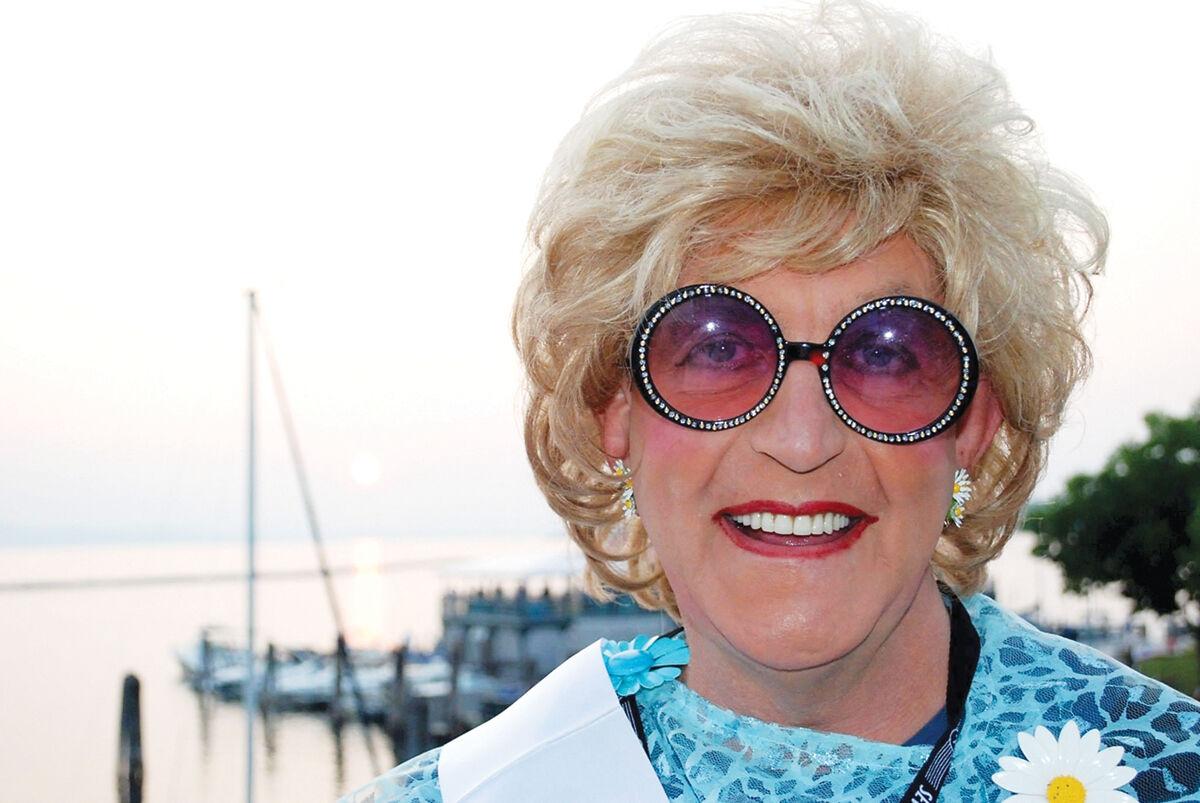 Bob Bolyard said alter-ego Amber LeMay is a character: “Amber is Amber.” With the cancelation of this year’s Winter Rendezvous, the annual gay ski week in Stowe, a check in with Amber LeMay, who has a new, popular talk show online. 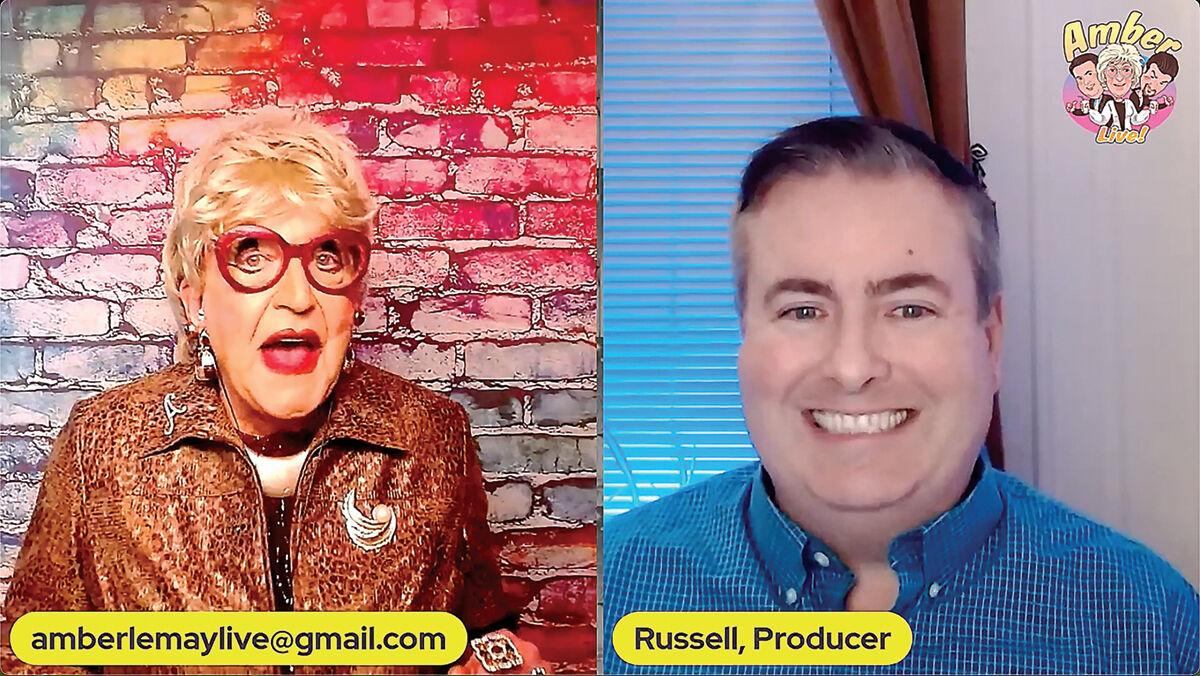 Bob Bolyard said alter-ego Amber LeMay is a character: “Amber is Amber.” With the cancelation of this year’s Winter Rendezvous, the annual gay ski week in Stowe, a check in with Amber LeMay, who has a new, popular talk show online.

After the initial shutdown of the outside world because of COVID-19, he was looking for a way to be creative while staying safe.

Pre-pandemic he had been cast in a Shelburne Players production, but then it was canceled.

Enter Amber LeMay, Bolyard’s alter-ego known for her work with the House of LeMay drag troupe.

With the help of producer Russell Dreher, “Amber Live,” a weekly variety show, was born.

“For the first couple of weeks, it was just me talking for an hour,” Bolyard said. “Whatever came to my mind.”

Dreher, thinking they could bump things up a notch, suggested guests. Production moved from Facebook to Streamyard, which allows for publication on multiple platforms, with multiple players in various locations.

So far — knock on wood — production has been smooth, without major hiccups.

Of digital producing, Bolyard said, “It’s opened up so many doors, or windows, whatever you want to call it. “Here I am in my basement with a laptop and a couple of work lights.”

As he spoke from that basement, a backdrop hung behind, a faux-brick pattern with multicolored lights shining on it. His initial choice was a glitter curtain, but that was too tacky.

“Amber likes shiny, but that was a little cheesy looking. The bricks look a lot better — not quite standup, not quite basement,” Dreher explained.

Bolyard lives in Burlington, Dreher in Astoria, Queens, N.Y. Others who make the show happen, including Dave Hanson, Jack Quint and more, plus guests, are spread across the globe. Yet with the help of technology, each week audiences can always expect the unexpected.

A big, bearded, guy, Wilson’s physicality presents similarly to the character he plays, a small-town hick.

“You might not think he would be a guy who would hang out talking to a drag queen, and yet there he was, totally comfortable,” Dreher said.

The cast of characters seen on “Amber Live” are endearingly quirky, from Johnnie McLaughlin’s Lucy Belle LeMay (Johnnie McLaughlin) joining her house sister for “Bitchin’ in the Kitchen” — a cooking segment serving up multiple forms of dish — to Sherry Poppins and Angela Mansberry “passing the tea” in a recap of “RuPaul’s Drag Race,” the evening presents a comfortable, nostalgic feeling of old variety and cable-access shows. Think Sonny and Cher with a little Vermont-y “Hee Haw” thrown in.

For host and protagonist Bolyard, Amber is a role he plays in that space.

“I don’t try to be a female illusionist. I’m not trying to be a female impersonator. I consider Amber LeMay a character, in the broadest sense of the word,” he said. “I don’t expect anybody to think I’m a female, but I want them to say, ‘what are you?’ I don’t want them to assume anything — Amber is Amber.”

The House of LeMay sprang from “The Green Mountain Gay Boys,” the name Bolyard and Mike Hayes — Marguerity LeMay — performed under decades ago.

No one wanted to watch them, according to Bolyard, a stark contrast to Cherie Tartt, and Yolanda, local drag queens with, er, varying degrees of musical talent.

Cherie “told lame jokes, but people loved her,” Bolyard said. He and Hayes decided hey, they could do that.

That was many years before today’s more mainstream drag scene with Trixie Mattel taking over small screens, HBO’s “We’re Here” bringing the art form to the Bible Belt and, locally with a host of performers including Cambridge’s Emoji Nightmare, plus Shani and Nikki Champagne (aka Taylor Small, a Democrat from Winooski who is the state’s first openly transgender lawmaker).

RuPaul Charles, known commonly on a first-name basis, has expanded the audience for drag queens, Bolyard said. He did note, though, that at the local level the lack of a central space is tough.

“I don’t know if a gay bar would survive right now. But I wish there was one and I just think there needs to be a central meeting place where people can socialize and meet and feel comfortable,” Bolyard said.

While he can be comfortable anywhere — as Bob or Amber — he realizes that isn’t the case for everyone.

That comfort seems to play into his host role on the show, making guests open up as they may not with other outlets. When Bolyard asked former Lt. Gov. David Zuckerman about his loss in November, Zuckerman didn’t hold back — “I got clobbered,” he said.

This human element is key.

“I talk to them like if they were sitting across the room, we’re old friends and we’re having a beer,” he said of his guests. “Just as humans, you know I try not to gush or be a ‘fan girl.’ ”

Another guest with whom Bolyard got political was Rep. John Killacky, a Democrat from South Burlington.

Upon moving to the area in 2010, to serve as executive director of the Flynn Center for the Performing Arts, Killacky recalled encountering Bolyard — as Amber — on Church Street during the annual Pride parade.

“Hey Mr. Flynn, welcome to town,” Bolyard shouted. That’s Amber in a nutshell as far as Killacky is concerned.

“Drag is a political act,” he said. “It’s theatrical and it’s political, and people doing things, changing the norms.

That has included Bolyard — again, as Amber — rappelling down the side of the Flynn for its “Over the Edge” fundraiser.

Bolyard, Killacky said, is an amplifier, an animator, a community steward.

“I just admire him so much.”

When going viral is OK

For now, the show is a hobby for those involved. But that doesn’t mean they’d turn down money.

However fun it may be, the show is a lot of work, Dreher said, and it would be nice to find sponsors to help with basic expenses, and maybe even pay people for their time.

With a growing viewership and larger and larger bookings — and supplemental “Amber Chat” mid-week — the sky’s the limit.

Bolyard said his dream lineup would be a musical performance by Bette Midler and Barry Manilow.

Not a bad idea.