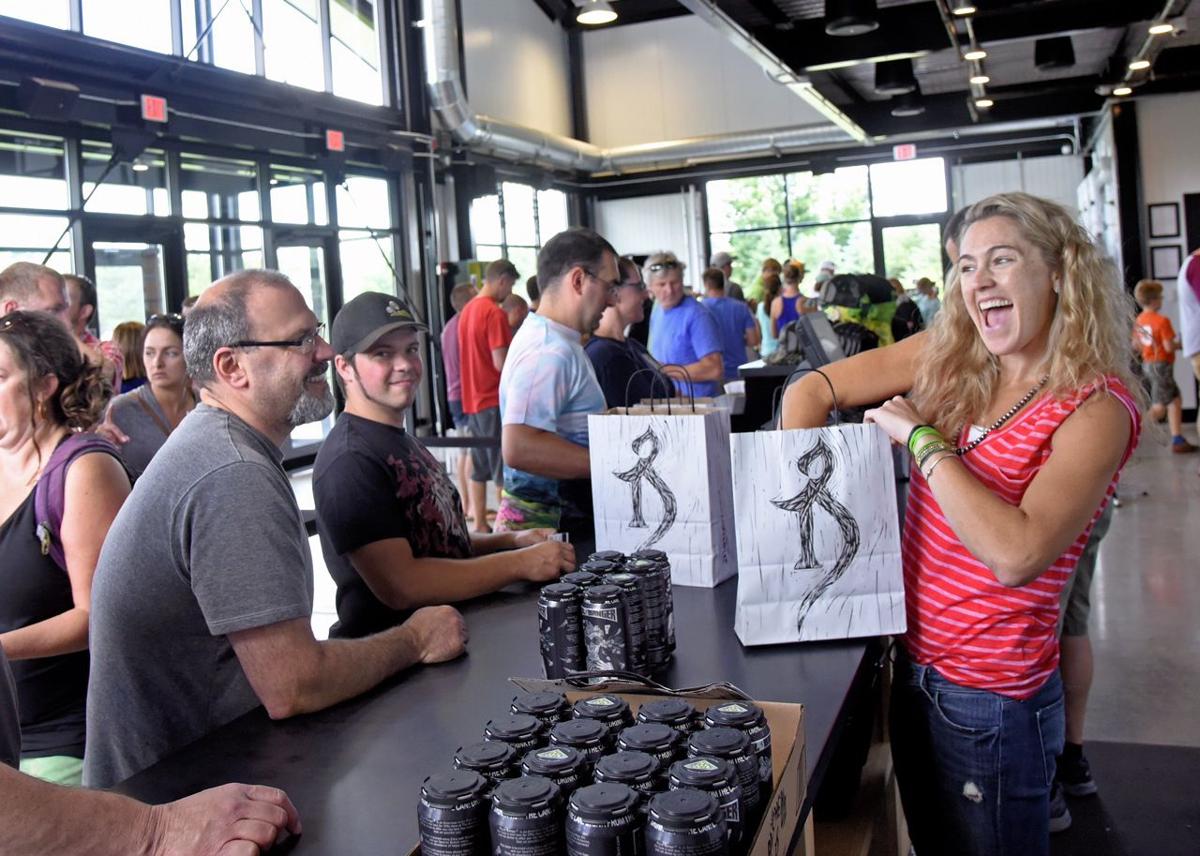 There was a party going on in July when the Alchemist Brewery opened in Stowe on short notice. 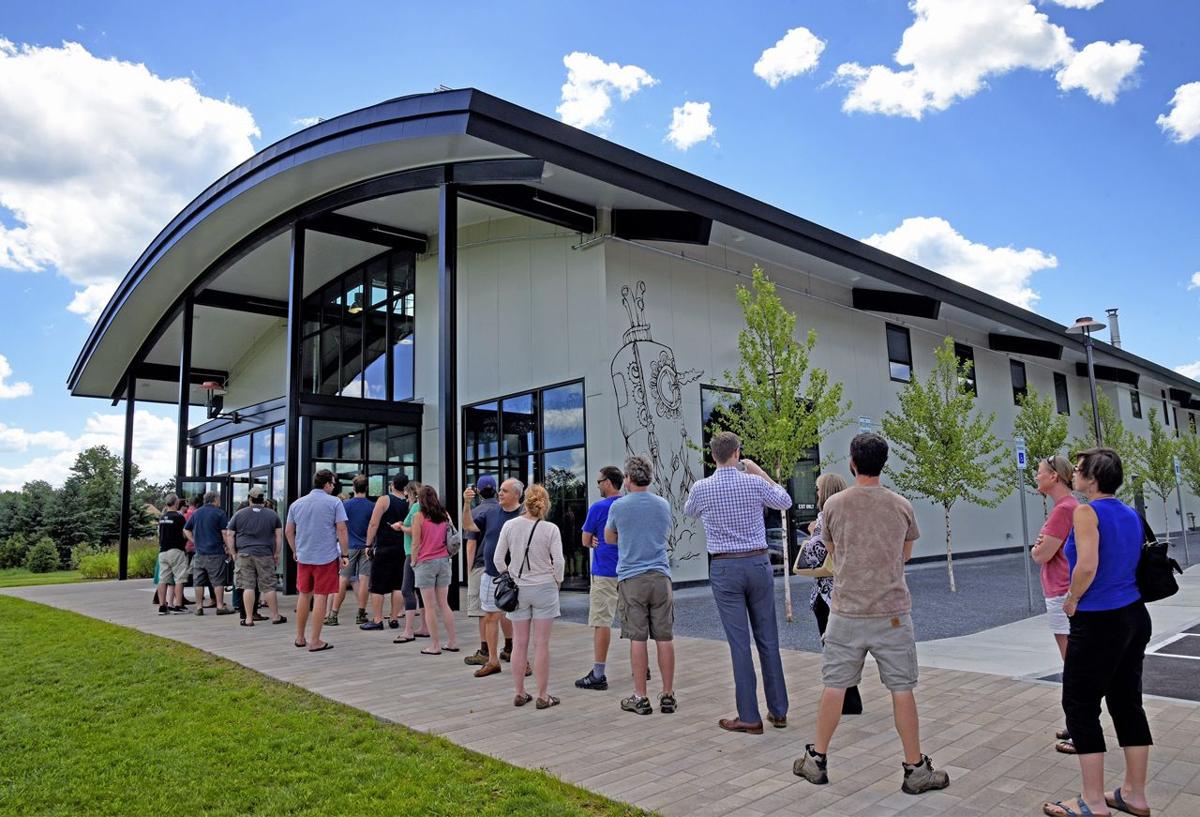 It was all smiles and suds as hundreds of people waited in line for 30 to 40 minutes at a time to grab a case or two of Heady Topper or Focal Banger at The Alchemist. 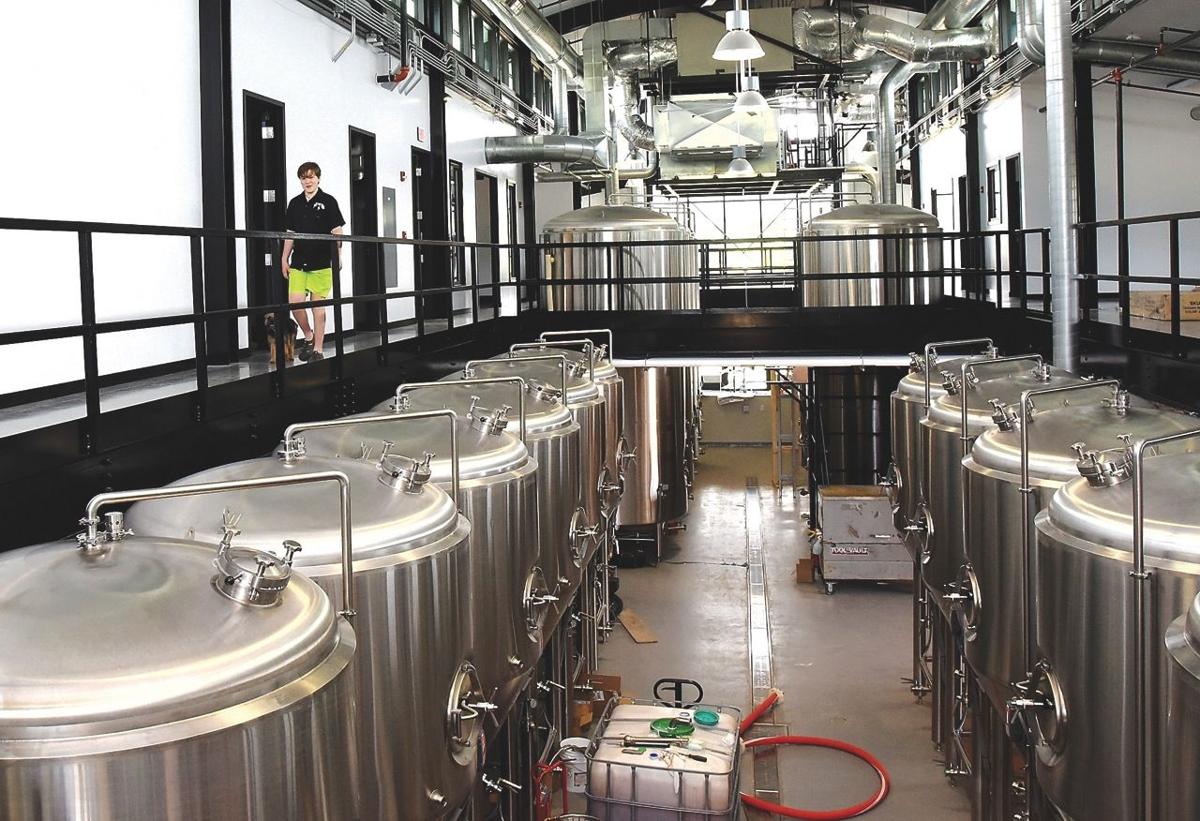 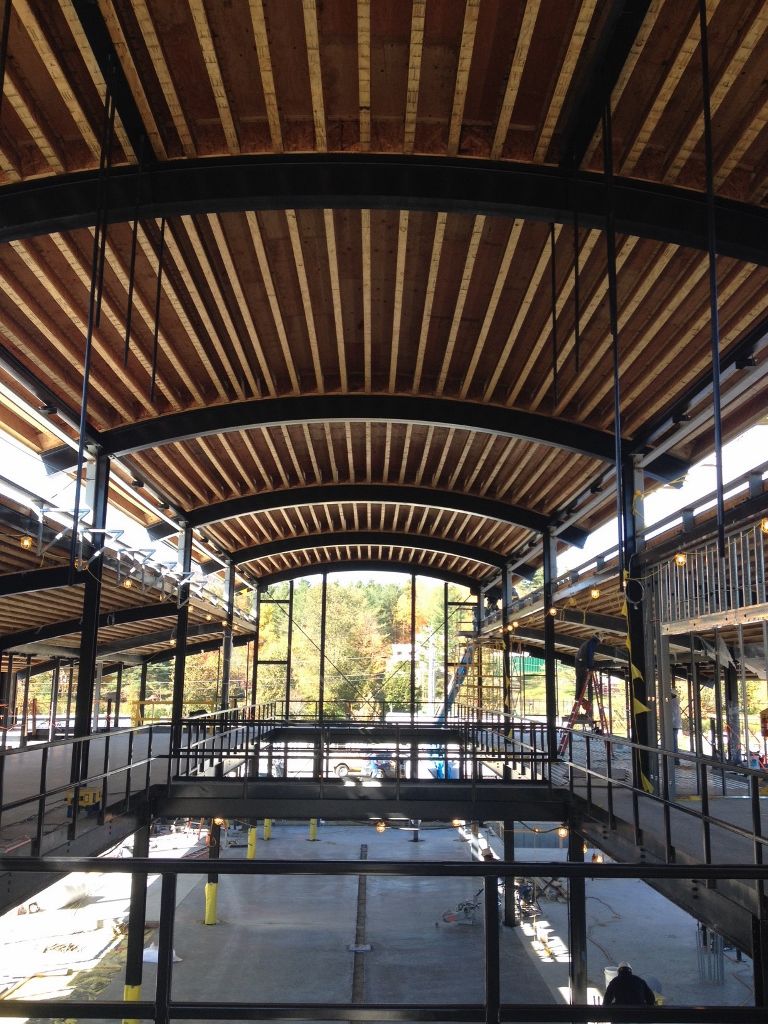 A view through the in-progress Alchemist brewery in October. The Massachusetts-based architecture firm Austin Design Inc. designed the soaring structure. 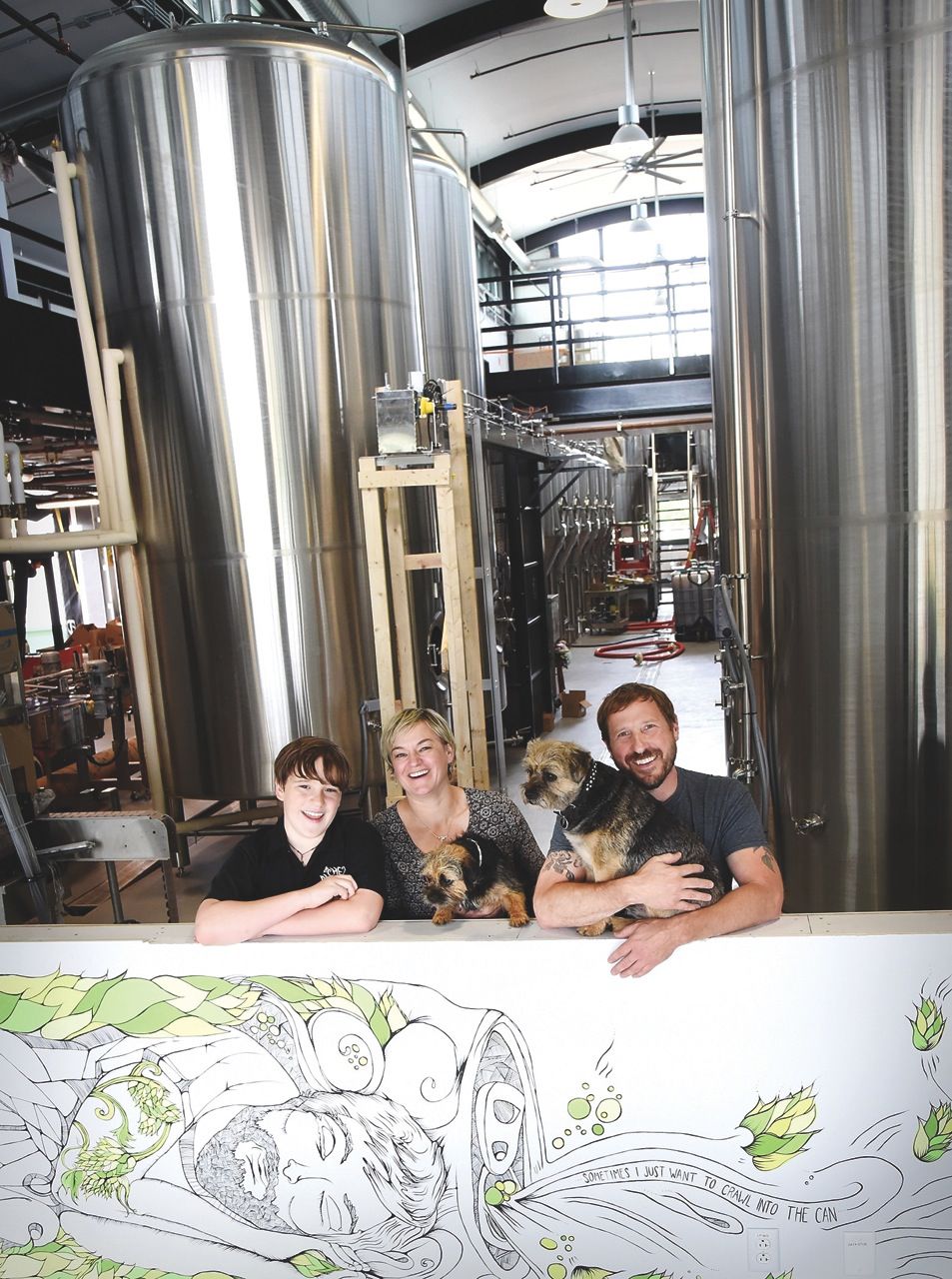 The Kimmich family: Charlie, Jen, John and their pups in the new brewhouse. 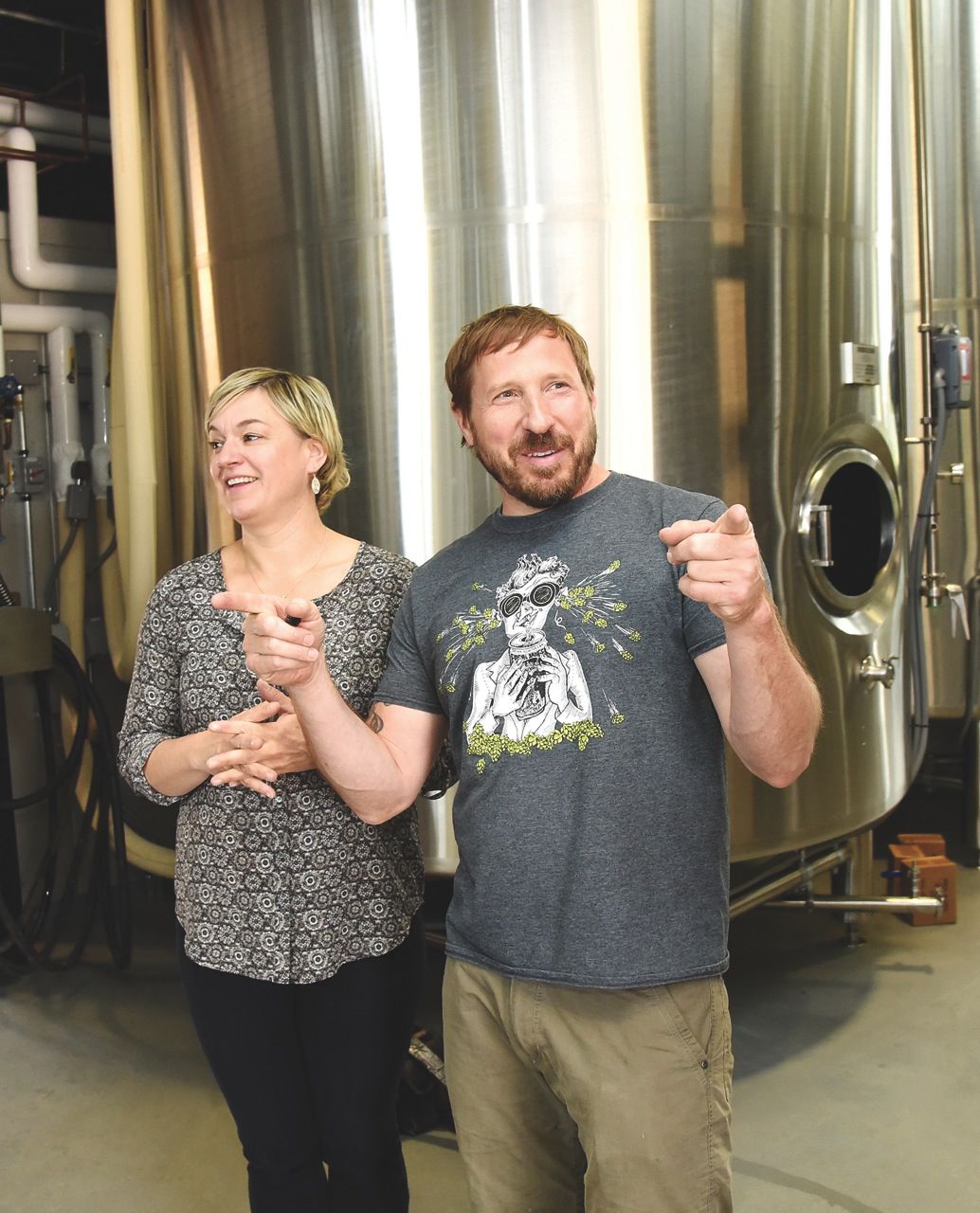 Jen and John Kimmich in Stowe. 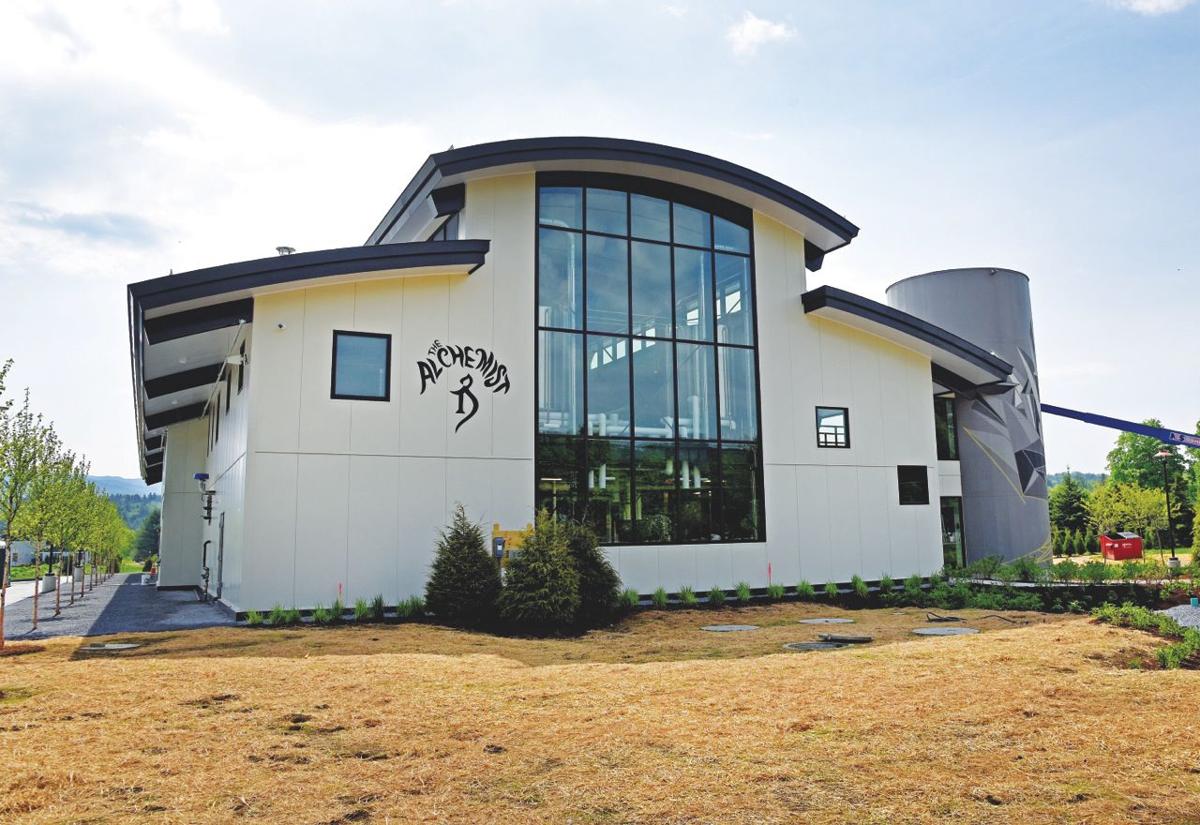 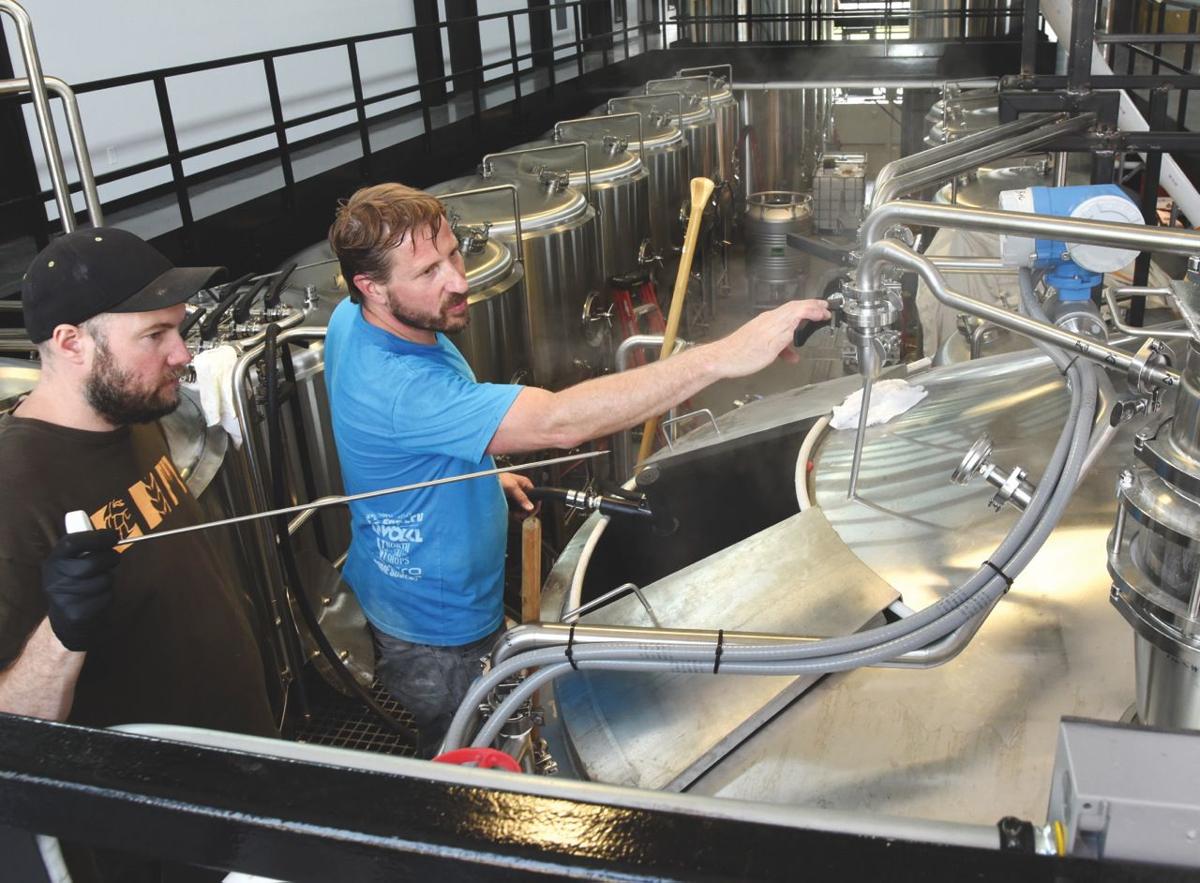 Lead brewer Jim Conroy and co-founder John Kimmich fire up a batch of The Crusher.

There was a party going on in July when the Alchemist Brewery opened in Stowe on short notice.

It was all smiles and suds as hundreds of people waited in line for 30 to 40 minutes at a time to grab a case or two of Heady Topper or Focal Banger at The Alchemist.

A view through the in-progress Alchemist brewery in October. The Massachusetts-based architecture firm Austin Design Inc. designed the soaring structure.

The Kimmich family: Charlie, Jen, John and their pups in the new brewhouse.

Jen and John Kimmich in Stowe.

Lead brewer Jim Conroy and co-founder John Kimmich fire up a batch of The Crusher.

When The Alchemist brewery opened last July in Stowe, it dropped a big red pin into online maps and GPSs, and beer voyagers began pointing their cars directly for Cottage Club Road.

Those beer lovers — on a busy day, up to 1,200, says Jen Kimmich, who co-owns the operation with her husband — are having a significant impact on the local economy, according to owners of businesses in the Alchemist’s splash zone.

Since the Alchemist has no restaurant, its website links to the Stowe Area Association’s list of local restaurants.

According to the association, 13 percent of its website visits come via links on other sites, and alchemistbeer.com is responsible for more than half those referrals — 7.7 percent of the total.

Said Amy Morrison, Stowe Area Association’s executive director, “This statistic shows that The Alchemist is helping to promote Stowe as a destination by driving visitors from their site to GoStowe to discover all that the activities and amenities there are (to) experience in Stowe.”

Alchemist employees don’t just recommend that visitors scope out Stowe online; they do it in person, too — when visitors inevitably arrive before the Alchemist parking lot opens at 10 a.m. Employees remind the drivers of circling cars that they aren’t allowed to wait in the parking lot, so, while they don’t have to go home, they can’t stay there.

Some get offended at that; a letter-writer said in August “I ended up in the parking lot of Darkside Snowboards with a few other customers not allowed to enter the Alchemist’s holy ground too early. Later I discovered that dozens of other folks had done the same at other locations near the brewery.”

What impact has that had on the businesses in question?

“People say, ‘Hey, we’re waiting, so they sent us over here,’” Carroll said.

Haab said there are “lots of times” when he’s talking to customers who say they’re planning to go to The Alchemist next, or they just came from there.

“The brewers eat here every Monday after they close,” Haab said.

“We absolutely have” noticed an uptick in business since The Alchemist opened, said Ani Petrolito, marketing manager of Idletyme Brewing Co.

“We’re a smaller craft brewery, but if people are in the area, they’re going to stop in,” Petrolito said. “I have heard from patrons, ‘We’re looking for Heady Topper, and then we’re looking for a place to have lunch,’ so they come next door to us.”

Hotel owners, too, rejoice at the beer tourists who come from all over the country.

“There’s a lot of people who come just for Heady Topper,” said Kate Laster, owner of the Hob Knob Inn on Mountain Road. “People can walk there from our property,” so the inn has been flourishing. “We have two ice machines here, and sometimes they’re both empty,” just from people filling their coolers to keep their precious haul on ice.

Laster says she’s also come across brewer hopefuls who want an audience with the wizards.

“We had somebody who came with a growler of her own beer” and wanted to make a trade, Laster said. “It’s just a big beer culture. It’s been great for business.”

“We’ve certainly seen enthusiasm from guests who stay here,” Clark said. “They ask, ‘Where can we store our beer?’ Because they’ve scored what they consider a treasure. I know people stay here because of the Heady Topper.”

Clark relayed an anecdote from the Morrisville-Stowe Airport — apparently a pilot had flown his plane into the airport, driven out for a case of Heady Topper and flown out again.

“You would be very surprised. There are quite a few people who fly up here just for the beer,” Long said. “It’s probably once or twice a week. It seems funny, I know, but it’s true. We’re certainly happy they set up in Stowe.”

Local retail stores have also noticed that clouds of cash and tourists accompany the hops from The Alchemist.

“On busy days, we get that question two to eight times a day,” Coon said. “We don’t carry Heady Topper, but we do get a lot of folks looking for it. Some folks come in and they’ve heard of the beer, but they don’t know exactly what it’s called.”

Guesses have ranged from “that stuff in the silver can” to “Teddy Hopper,” Coon said.

“Usually I’ll direct them how to get to the brewery,” Coon said, “but I try to get a sale out of it, too, by recommending them similar beers. Heady is its own unique beer, but there are other IPAs they might enjoy.”

The Alpine Mart on Mountain Road does carry Heady Topper, and the query is obviously common there, too; when you start typing in “Alpine Mart Stowe,” Google autocompletes the search with “Heady Topper.”

The Kimmichs themselves have heard of the impact their landing in Stowe brought to area businesses.

“We certainly heard from other business owners during the ‘off season’— particularly the month of November,” Jen Kimmich said. “We scheduled a few specialty beer releases in November that really boosted our off-season business. We heard from several business owners who expressed their surprise at the lack of downtime in November, particularly the days where we had special beer releases.

“In fact, our record sales day was in November when we released Petit Mutant,” Kimmich said, referring to a cherry ale the brewery periodically crafts in small batches.

“I believe many of our customers spend an evening in Stowe and some plan their entire vacation around beer — visiting us, Hill Farmstead, Lost Nation. Others simply stay in Stowe. ... So, yes, I think collectively craft breweries have really brought some consistency to tourism which is quite different from the seasonality that recreation brings to Vermont,” Kimmich said.

Consistency is something the Kimmichs consciously hoped to bring to the area.

“We all know that extreme seasonality is becoming increasingly difficult to navigate (and survive) for our small businesses. I recall last year losing several Stowe businesses that were near and dear to Stowe locals, simply because the quiet months were too challenging to be sustainable — Phoenix, Gracie’s, Sauce,” Kimmich recalled.

“As we witnessed over Christmas week, no business owner needs to be busier during the peak holiday weeks of the year. We do, however, need to focus on increasing our tourism and getting ‘heads in beds’ during the quiet months/weeks of the year. Hopefully we can all work together to create events and drive tourism during our historically quiet times,” Kimmich said.

Danny Litwack, Brian Berman, Joe Roskep, Jordan Aronson, Keith McGivney and John Ahern are visiting Stowe from Long Island, New York. The guys are back after a prior visit two years ago, and they’ve come to pick up Heady Topper.

They’ve come prepared — their SUV is full of coolers, and they take turns carefully — gingerly! so as not to disrupt the carbonation — loading about 10 cases into the already-iced boxes, by their best guess.

They can remember the first time they were in Stowe, waiting three hours at a gas station for the delivery truck to show up.

“We buy a lot of beer,” Ahern laughed.

The guys said they’d been snowboarding already and they’d been all over Stowe’s restaurants. They had a few more days to spend here in Vermont, and they’d like to hit Burlington next.

They came for The Alchemist, they said, but it turns out the rest of the area is pretty cool, too.

A walk through the new Alchemist brewery in Stowe

As a small army worked double-time last week to shape wood, metal and paint inside the new Alchemist Brewery in Stowe, something happened that…