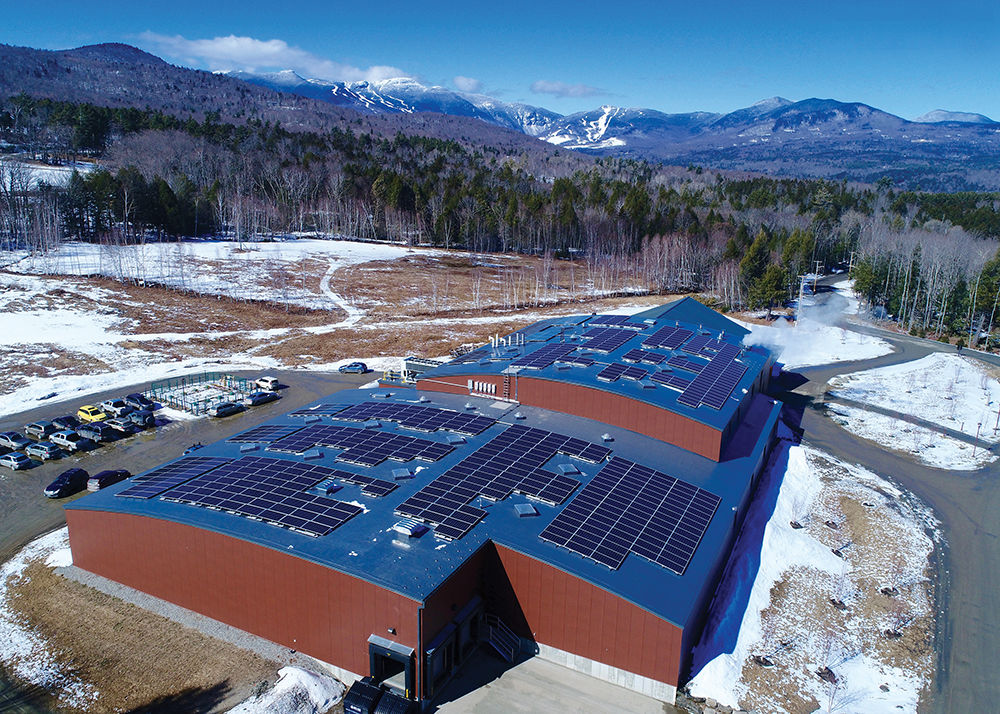 The 150-kilowatt solar array on the rooftop of von Trapp Brewing and Bierhall took about three months to build, with up to 20 people on the rooftop at a time. 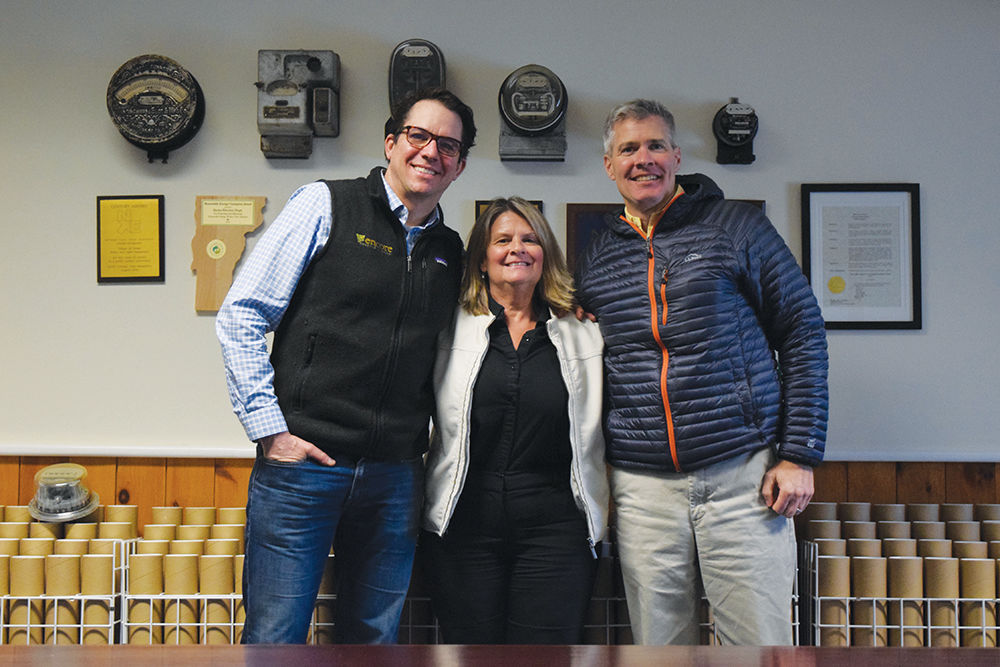 From left are Chad Farrell, CEO of Encore Renewable Energy; Ellen Burt, general manager of Stowe Electric Department; and Walter Frame, executive vice president of Trapp Family Lodge. Farrell’s company installed a 150-kilowatt solar array on the rooftop of von Trapp Brewing and Bierhall, and all the renewable energy credits from that operation will go to Stowe Electric.

The 150-kilowatt solar array on the rooftop of von Trapp Brewing and Bierhall took about three months to build, with up to 20 people on the rooftop at a time.

From left are Chad Farrell, CEO of Encore Renewable Energy; Ellen Burt, general manager of Stowe Electric Department; and Walter Frame, executive vice president of Trapp Family Lodge. Farrell’s company installed a 150-kilowatt solar array on the rooftop of von Trapp Brewing and Bierhall, and all the renewable energy credits from that operation will go to Stowe Electric.

In Stowe, to learn more about renewable energy, you can ask a brewery or two.

Von Trapp Brewing and Bierhall has been producing its own supply of solar energy for the last three months, and The Alchemist brewery asked the Stowe Select Board Monday night for permission to build one of its own.

Encore owns the array, and has leased the roof space from von Trapp Brewing and Bierhall. In a few years, Trapp Family Lodge will have the option to buy the array, Frame said.

“It gives you a whole new reason for being happy when the sun shines,” Farrell said.

The solar array on the Bierhall roof can produce up to 150 kilowatts of energy at a time, Frame said — enough to power an average of 30 single-family homes.

It’s the first privately owned, large solar array built in Stowe, she said, and it helps Stowe Electric Department work toward the state’s renewable energy goals, which require utilities to get 10 percent of their renewable energy from Vermont-based sources, Burt said.

All renewable energy credits from the Trapp Family Lodge array will go to Stowe Electric Department, which helps alleviate some of the burden on Stowe ratepayers, Burt said.

That’s because if the municipal utility doesn’t get enough renewable energy credits, it’s required to pay a steep fee to the state, or buy those credits on the market, which can be more expensive, Burt explained.

“It just worked with our Vermont renewable energy standards,” Burt said. “We take it very seriously that those things are done. … It’s better for ratepayers.”

“It was important that the credits stay with Stowe Electric, for us, that they didn’t migrate somewhere where there was no benefit to the locals,” Frame said.

The array built at the Trapp Family Lodge brewery will generate about $30,000 per year in renewable energy credits, Burt said, and it supplies about 30 percent of the power used by the brewery and the bierhall’s annual electrical requirements.

In 2017, von Trapp Brewing and Bierhall used almost $150,000 in electricity, according to Stowe Electric Department data.

Since the brewery solar array is built on a rooftop, and isn’t visible from the ground, it was exempt from Act 250 review, but the project did get a certificate of public good from the Vermont Public Utility Commission, Frame said.

“We’ve been contemplating it” for a while, Frame said. “We wanted to do something on top of the brewery. Philosophically, we’d rather have it on a building than in an open field,” Frame said.

It was hard to design the array, Farrell said, since the roof of the bierhall doesn’t have edges, and is barrel-shaped.

“That roof was challenging,” Farrell said. “We overcame a lot of hurdles with that roof.”

Farrell called the design his team settled on “slightly creative.”

Panels are secured to weighted panels, and angled to accommodate the sides of the dome-shaped brewery roof.

Up to 20 workers were on the roof at a time, tied down for safety, and a representative from the roofing manufacturer was there, too, Farrell said.

Von Trapp Brewing and Bierhall was operational the entire time work was going on, Frame said.

“We always try to do things to help the community, to help the environment,” Frame said. “I always say the Trapp family was composting before people knew what composting was. A lot of this stuff comes natural, so this just seemed like a natural progression, if we could keep the renewable energy credits locally.”

Another private solar array is being planned at The Alchemist brewery on Cottage Club Road in Stowe.

The Stowe Select Board agreed Monday to tell the Vermont Public Utility Commission that it approves of the project. The select board doesn’t have jurisdiction over the project, but its endorsement could help the project get a certificate of public good from the state commission.

Since three trees in the center island of The Alchemist parking lot will need to be removed, the application will be heard by the Stowe Development Review Board, which does have some legal say over whether the project falls within Stowe’s zoning regulations.

The array will produce 139 kilowatts of electricity. It will include two car covers, one near the entrance and one near the center island of grass in the brewery’s parking lot. That design will keep the solar array out of sight of as many people as possible driving on Cottage Club Road, said Mike McCarthy, a solar project consultant with SunCommon, the Waterbury-based company that’s building the array.

The canopies will be pitched toward the lawn so as not to dump snow on parked cars, McCarthy said.

Billy Adams, chair of the select board, thanked the company for keeping the arrays small, even though “they could be 50 percent bigger,” McCarthy said.

“That means a lot,” Adams said.

“Maintaining the beauty of our property was critical,” said Jen Kimmich, who co-owns The Alchemist with her husband, John. “We didn’t want our property to look like an airport parking garage.”

The Alchemist has been working for about a year on the solar array plan. Construction will take up to eight weeks, McCarthy said. For about 10 days of that time, construction could be noisy, but the rest of the time, it will be quiet, he said.

Donna Adams and Barbara Allaire of the Stowe Cemetery Commission expressed concern whether construction noise could disrupt burial services at the nearby West Branch Cemetery.

“It’s all about the breweries, not about the people in the surrounding area,” Allaire said. “We take great pride in our cemeteries.”

McCarthy said SunCommon will keep noise to a minimum during burials, provided crews are given sufficient notice.

“We want to be good neighbors,” McCarthy said.

In about 45 days, the application will be heard by the Vermont Public Utility Commission.

Selling “staunch” Vermonters on renewable energy is all about the pitch.