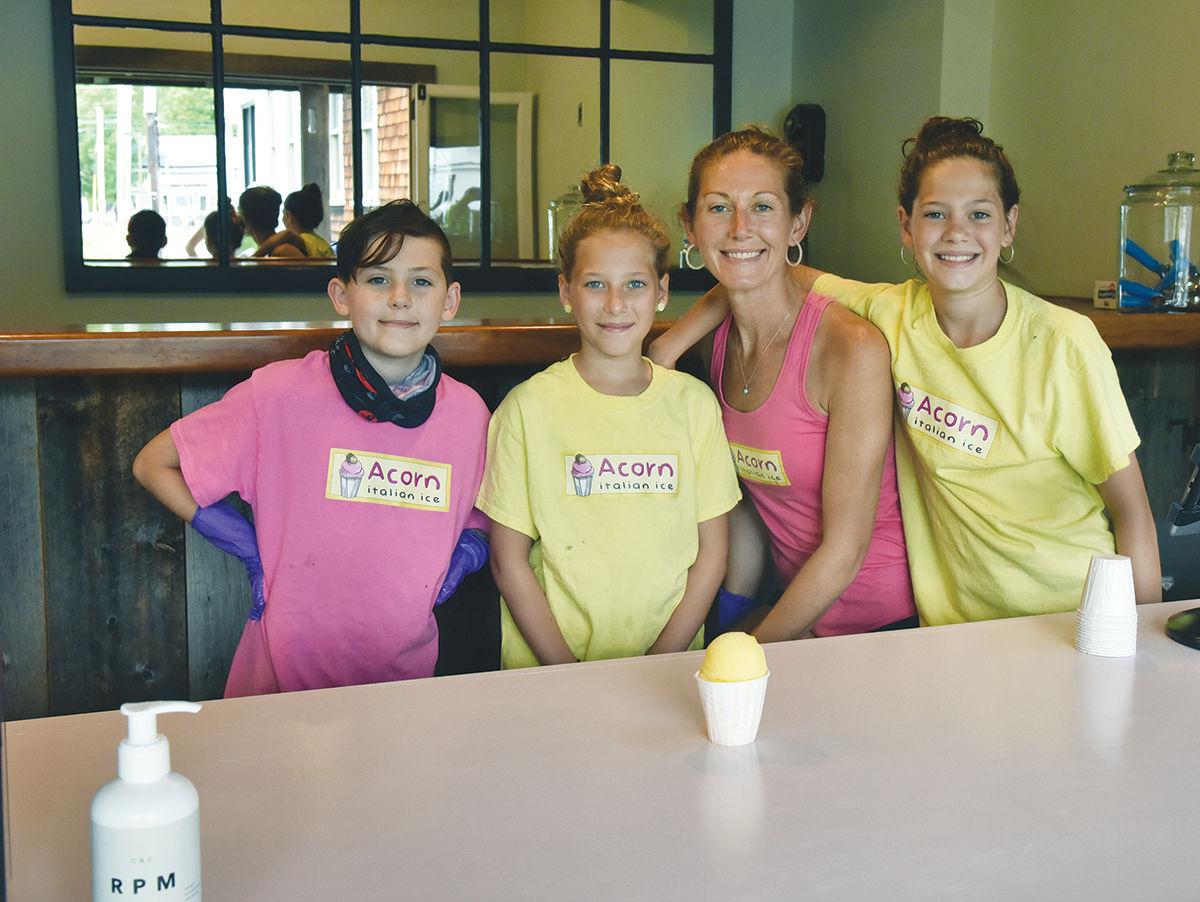 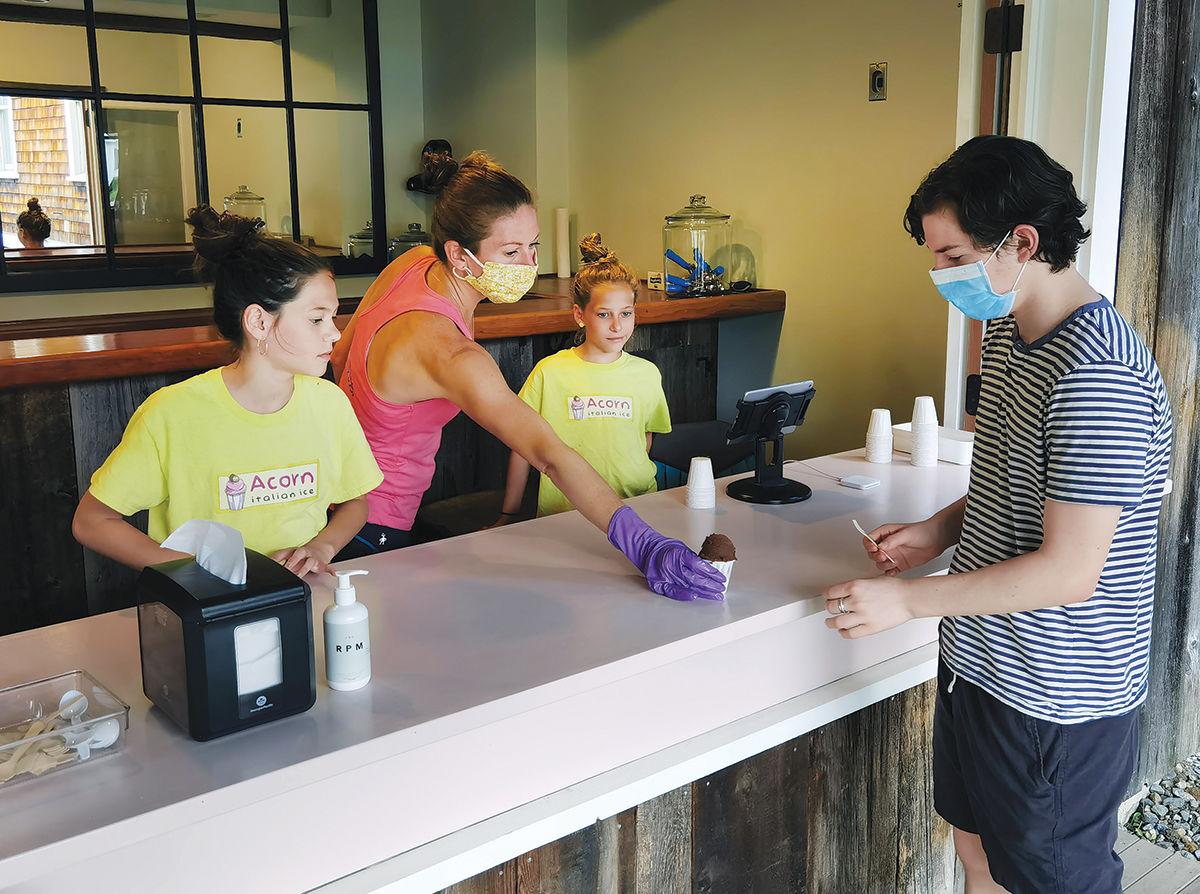 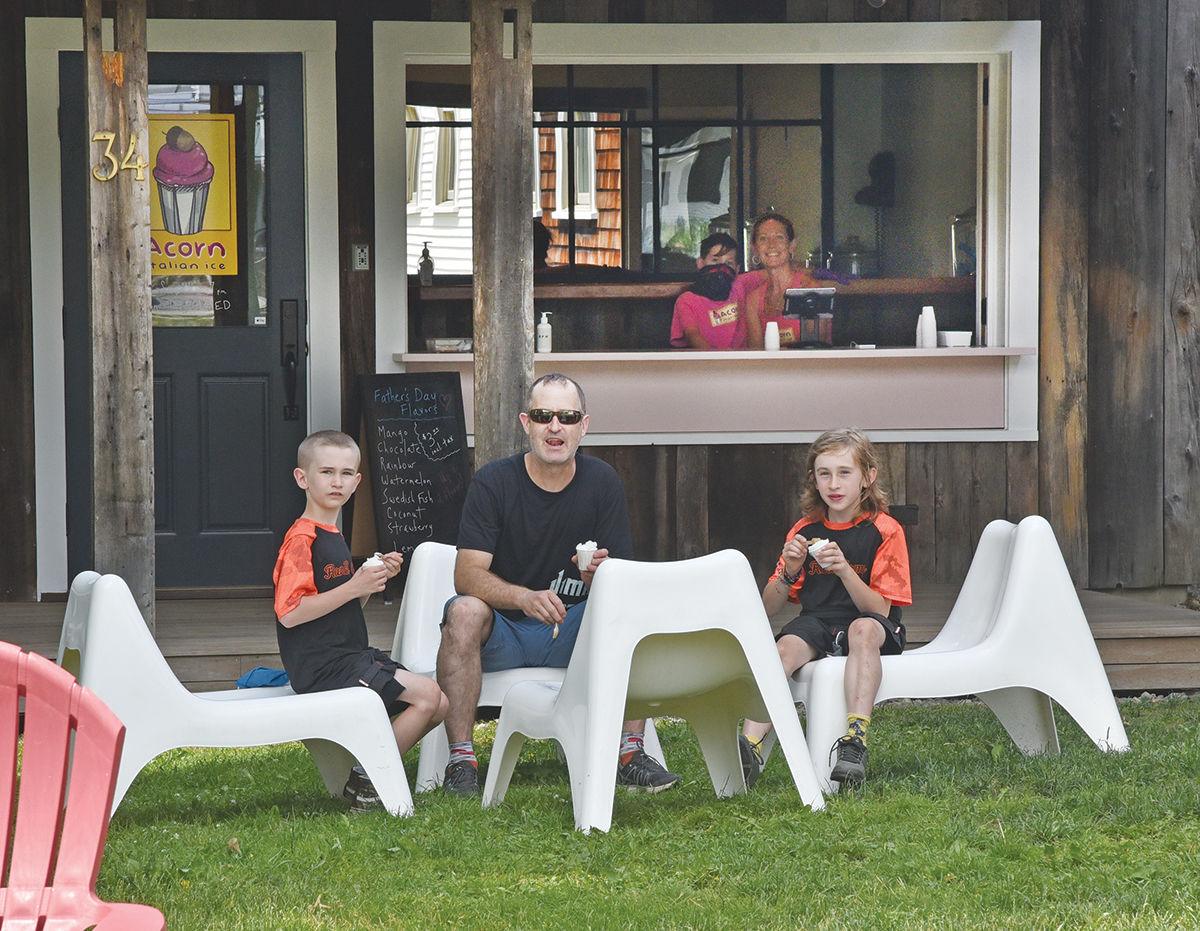 The building next to the Annello family home on Park Street has an old-timey vibe reminiscent of classic Vermont. The unfinished brown and gray wood siding holds a weathered characteristic of many buildings across the countryside. But, what was once a farmhouse is now the Acorn Italian Ice shop, and the whole family plays a part.

Cassie Annello, owner of the shop with her husband Jared, sat on a stool behind the counter of the building’s new service window. A handful of children sat under the covered porch on a rope swing and bench made from a Burton snowboard from the early ‘90s. They talked with each other and kicked the swing into motion, each holding a different flavor of Italian ice.

“I grew up in Long Island, New York, and we always had Italian ices,” Annello said. They moved to Stowe last April from Massachusetts and Annello wanted to bring some of her childhood here, too.

“A lot of Vermonters come up and ask ‘What’s Italian ice?’ ” she said, and after they spend the three dollars on a two-scoop portion, they walk away pleased with their discovery.

Converting the building wasn’t hard; it was already a finished space when the Annellos moved in. The previous owner used it as a hangout. Behind the service window is a wood bar — the shelves under and behind now missing spirits — and to left is the freezer that the Annellos installed to hold their frozen treats. All the family had to do was install a new window that they could open for service and get the proper permitting from the town. Oh, and of course, they had to pick the perfect Italian ice.

“We wanted something with the most all-natural ingredients,” Annello said. When she spoke with their distributor, that narrowed their choices quickly. The big point was no high-fructose corn syrup, sticking to the company motto “Less guilt, more pleasure.”

Annello’s children were on break at the time, hanging out with a friend and enjoying an ice. But, when break’s over, they scoop for the family company.

“It’s really fun to work here,” Bella, Annello’s oldest daughter at 11 years old, said. She was wearing a blue Acorn Italian Ice shirt, which says “Be Nice,” on the back.

Bella had done some babysitting in the past but, “this is my first job for a real company,” she said.

“It’s fun,” said Olive, 9, who was on the swing next to her friend, also named Olive. She said her father used to do manual labor for his parents, and she thought scooping Italian ice for a little spending money was a good deal.

Her twin bother Luca also works at the shop, but he was out fishing with his father at the time.

Not only is the gig a way for the kids to build a good work ethic, but Bella said she liked seeing the people that come by the shop. With schools suddenly closed when the pandemic struck, she missed her social life.

“People that we haven’t seen for a while, we get to see a lot now,” she said.