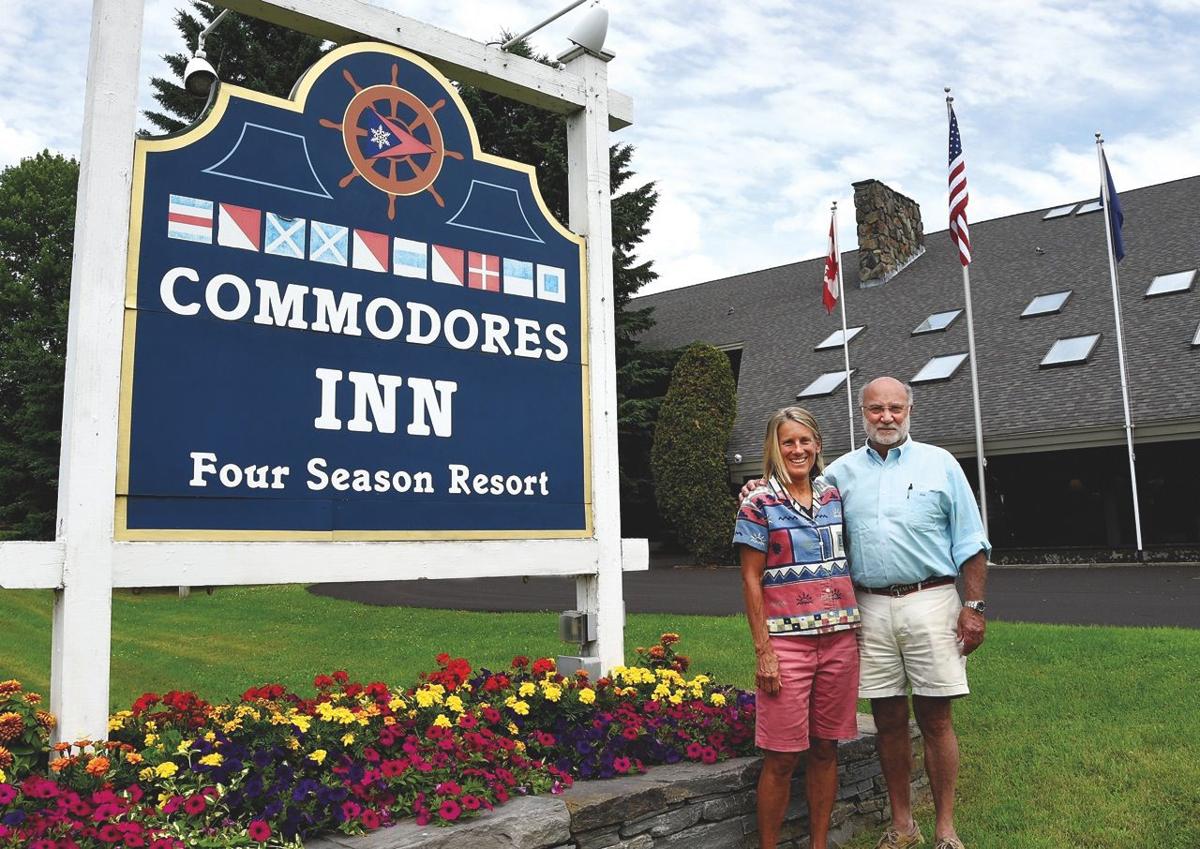 Carrie and Bruce Nourjian outside the Commodores Inn on South Main Street in Stowe in 2016. 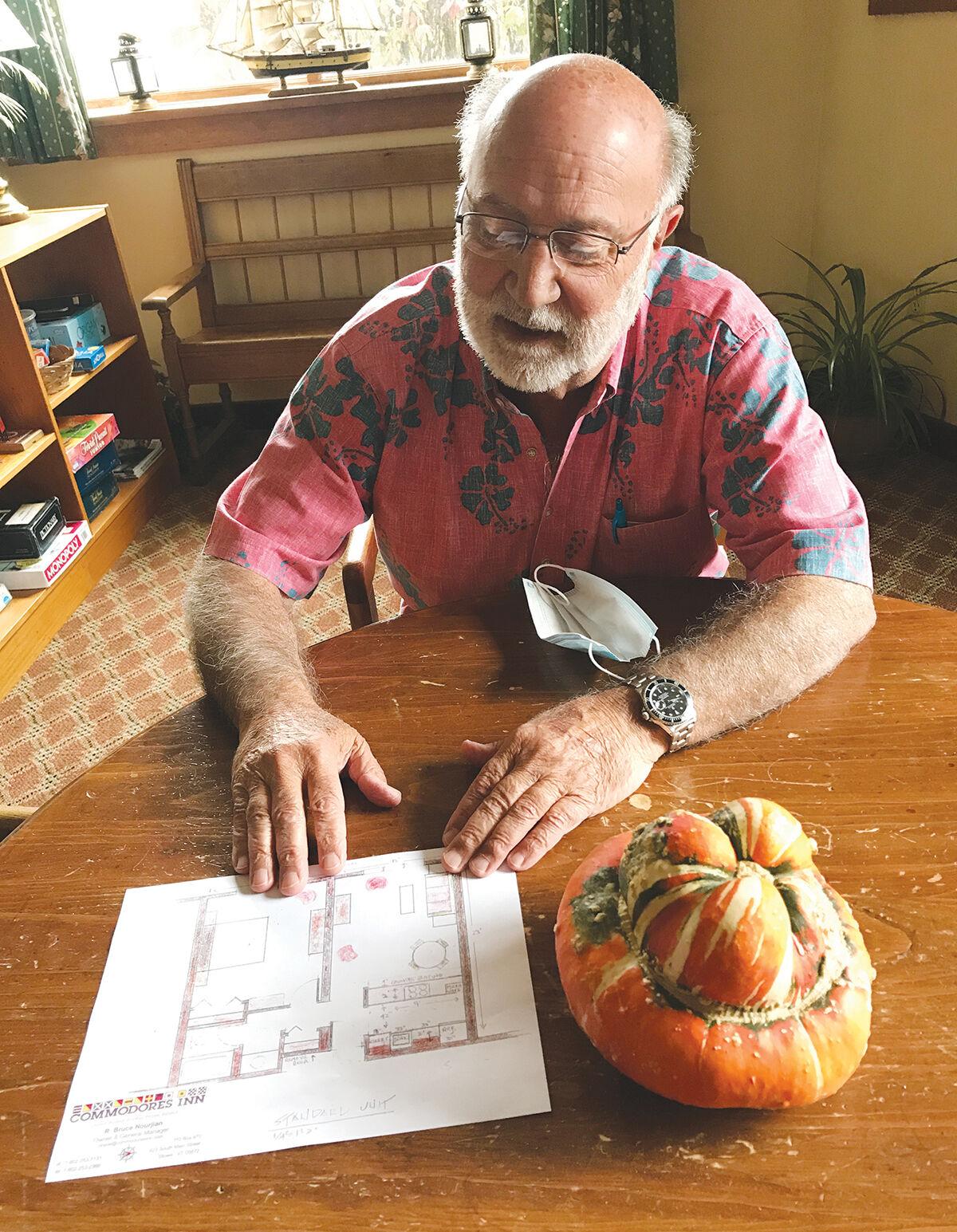 Carrie and Bruce Nourjian outside the Commodores Inn on South Main Street in Stowe in 2016.

Bruce Nourjian, co-owner and manager of the Commodores Inn, has been looking at too many empty rooms during the past half year. He thinks more people might stay if they can stay longer.

Nourjian last week was given the town’s blessing to change parts of the 72-room inn to apartments, upscale one-bedroom units with all the trimmings.

“I think the combination, the hybrid, will be regular hotel rooms and this is a value-added product. That’ll give us diversity,” Nourjian said this week. “A lot of people want to come up for a weekend, but someone might reserve this for three months in the winter.”

It was admittedly an eyebrow-raising zoning application before the development review board meeting Oct. 6, at least on paper: “Existing 72-room hotel with restaurant to be converted to 42 apartment units.”

Realistically, it will be more like six to eight apartments the first year. The Nourjians will see how that goes, and then gradually convert more rooms, maybe as much as half.

The conversion is nifty and simple: re-arranging the existing hotel room, turning its 27-foot width into two 13-foot rooms, adding a nine-foot-long galley-style kitchen in the corner of the common area, with counter seating separating it from the living room.

Nourjian said it was a simple sell to zoning officials. The longest part of the Oct. 6 meeting was sitting through an hour or so of other projects. His was done in about 10 minutes, he said.

These apartments aren’t designed for the casual tenant looking for a place to raise a family or just eat supper and hit the hay after a long workday. They’ll probably go for about $2,600 a month — or at a daily rate of $200-$250.

That’s high as far as normal apartments go, but at the Commodores, the tenants will have everything included that a hotel guest would have.

“They’re going to have use of all the amenities, the pool, the Jacuzzis, the saunas, complete use of the property — the lake up back, all that stuff,” he said. “It’s going to be upscale in some way.”

Stowe has had discussions on the definition of affordable housing at the planning level. In 2016, the planning commission heard suggestions that affordable included houses or condos in the $150,000 to $200,000 range, or apartments with rents running from $1,200 to $1,500 a month.

On the other hand, single-bedroom nonsubsidized apartments in Stowe are already renting for well over $1,000 — the 36-unit Mountain Haus apartments, built in the past few years, run between $1,400 and $1,850 and don’t have any of the things Nourjian listed.

The coronavirus pandemic and the rapid decline in business forced the Nourjians — Bruce and his wife Carrie — into some downtime, some time to think about how to diversify the inn’s offerings and bring in more money.

“Up until March, we had the best year going ever,” Nourjian said. “And then the pandemic hit, and boom, cut us right off at the knees. So, at that point, here we are sitting with a vacant building. And, you know, no business.”

Nourjian said inn staff is fastidious about checking out the Vermont Department of Health’s travel map whenever someone would call to book a reservation. Coming from a red zone? Sorry. Yellow zone? Not likely. Green? Come on in.

That kind of adherence to COVID rules almost guarantees empty parking lots and empty rooms. While Nourjian refrains from calling out specific lodging facilities for being laxer with the rules, he says if he takes a spin up Mountain Road, he sees plenty of parking lots packed with out-of- state cars.

“We won’t mention the names, but you know who they are,” he said.

Nourjian said there have been other factors hurting Stowe innkeepers over the past several years, with Stowe Mountain Resort cooperating less with lodges than in the past, and hundreds of private homeowners getting into the lodging business via Airbnb.

“I don’t want to get into the mud with Vail, but we did huge ski groups,” Nourjian said, referring to partnerships with Stowe Mountain Resort where guests could package their ski vacations with lodging at other inns and motels other than Stowe Mountain Lodge at the base of Spruce Peak. “And then they decided up there, nope, no more. No more ski groups.”

Nourjian appears to take some pleasure in being able to compete with Airbnb for the short-term rental market, too. He has a dim opinion of the service, which has hundreds of listings in the Stowe area, particularly since it allows owners of properties in residential areas to essentially run a business where normal lodging facilities would be verboten by zoning regulations.

“And, I think with this we can hit Airbnb, too, because we can throw this out there on their platform,” he said.

If you can’t beat them, he said, might as well join them.

Building on a brand

The Nourjians built the Commodores in 1985, after Bruce worked in various ventures around town for a couple of decades, including building the Matterhorn, one of the most popular après ski bars in America.

The hotel originally had 50 rooms, along with the restaurant and lounge, and the Nourjians added 22 more rooms in 1998.

Nourjian had thought about doing something like this back in 2004, when he pondered switching parts of the Commodores to timeshares. But a friend quickly convinced him to stay away from that, lest he find himself with too many masters.

“A friend of mine goes, ‘Be careful, because when you do a timeshare, if you sell just one week, all of a sudden, you’ve got a partner,’” he said. “Now, if you wanted to diversify or sell a building, you’ve got people that own part of it now. So, I dumped that idea.”

Since the retrofitting of the rooms is relatively simple, Nourjian will be able to have all of the construction done by Commodores’ in-house work crews, rather than contract it out. That saves big money, he said. And forget new construction.

“A two-by-four used to cost two bucks. Now, it’s six,” he said. “My daughter out in Colorado, an architect building out there, said it’s $10 for a two-by-four-by-eight.”

Nourjian said an innkeeper has to have plenty of patience to weather storms — or lack of them, in a ski resort town. And he’s seen Stowe grow from a winter-only town to a year-round destination where the winter has actually flattened out. And that won’t change because of COVID-19.

“Once this virus goes away, there’s going to be a surge again. People want to come to Stowe,” he said. “The name? I mean, that’s the brand.”