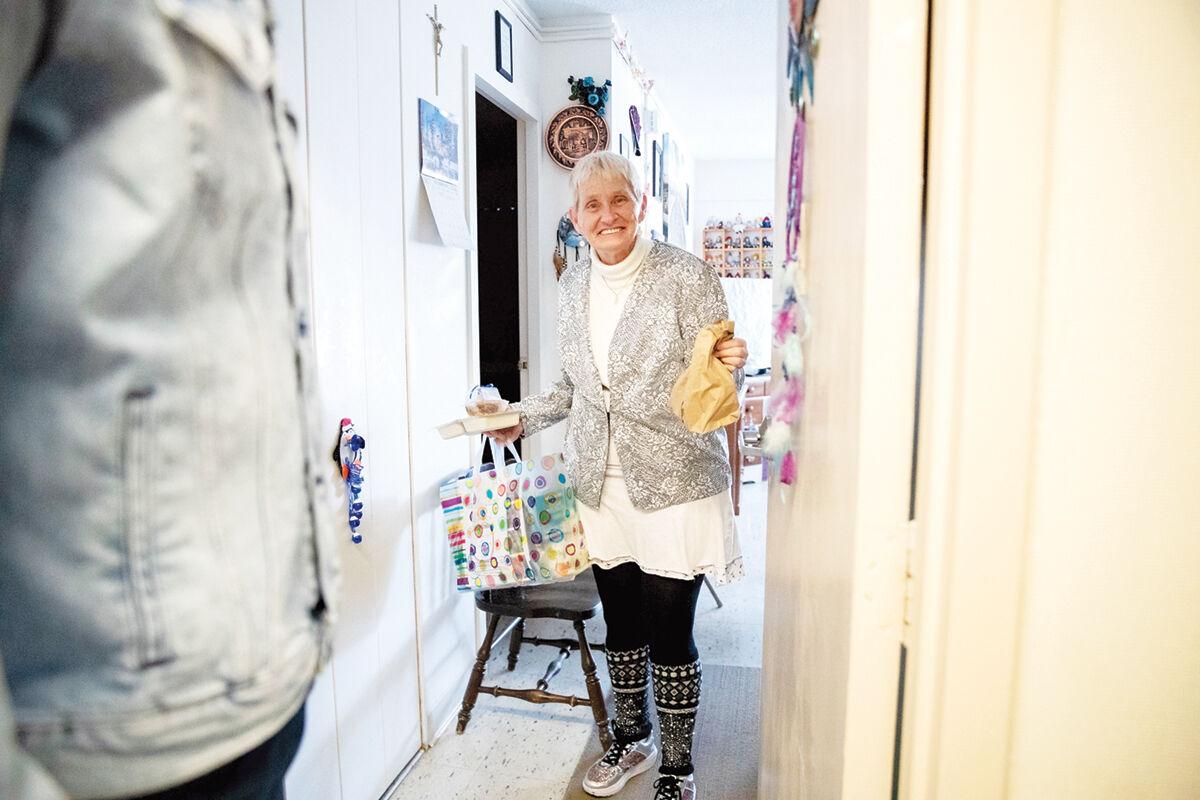 A happy senior having a meal delivered on Christmas Day.

Jo Ann Lafayette cooked over Zoom with her grandson Caleb Cascadden, 12 years old, in Barre. She couldn’t be with her daughter and her family this Thanksgiving.

A happy senior having a meal delivered on Christmas Day.

Jo Ann Lafayette cooked over Zoom with her grandson Caleb Cascadden, 12 years old, in Barre. She couldn’t be with her daughter and her family this Thanksgiving.

Family, homes and gatherings are synonymous with holidays. So, this time of year can be an emotional obstacle course for people, like senior citizens, who may be isolated from their families, alone in their homes and secluded by social distancing.

This is true in the best of times, but now when all are isolated by COVID-19 quarantine restrictions, this year could be particularly hard for people who were already separated from others.

A number of organizations that work to connect with seniors are ramping up their efforts this year and some are finding an inspiring number of people wanting to volunteer.

Seventeen years ago, Megan Humphrey, the executive director and founder of HANDS (Helping and Nurturing Diverse Seniors) in Burlington’s North End, was going around delivering meals to seniors on Christmas Day and she said, “I am never going to do this again.”

She decided that it was be better to have a meal for seniors. That idea gave way to a big meal at the Heineberg Community Senior Center.

In its first year 20 people gathered. Last year 450 seniors were served during a sit-down dinner, another 400 received meals brought to their homes. A total of 850 gift bags were distributed.

Humphrey’s organization was lucky in having too many volunteers, she said, “We have so many volunteers on Christmas Day that we have to turn volunteers away every year. And it will be especially true for this year.”

Anyone 50 or older in Chittenden County can reserve a free hot meal (ham dinner or vegetarian lasagna) to be delivered on Christmas Day by calling Age Well at 865-0360 through Dec. 18.

For more information or to donate, visit handsvt.org.

One of the programs the organization sponsors is called Support Buddies, which matches people one-on-one to talk at least once a week.

Because of COVID-19, these conversations are taking place by phone.

Val Hird, an artist who lives in the Old North End, decided to connect with some seniors at the beginning of the pandemic in the spring.

“I started with six ladies. I thought blissfully to myself this will be a couple of months,” Hird said.

Eight months later, she’s still talking to her Support Buddies once a week at a regular time.

In addition to phone calls, Hird teamed up with some of her seniors to make videos of them, which they could send to their friends, family and neighbors.

She’s found that friendships have formed through her volunteer work.

“We’re all taciturn New Englanders, but as time went on a rapport developed and the calls got longer and longer,” Hird said.

They’ve discovered common interests, too, for instance, one of her contacts grew up on a farm as Hird did; another shares her interest in local history.

One of them she has never met – Jo Ann Lafayette, who lives in South Burlington.

On the Wednesday afternoon before Thanksgiving, Lafayette connected with her 12-year-old grandson Caleb Cascadden over Zoom to show him how to make the pumpkin pie she would have been taken to Thanksgiving dinner at his home in Barre had she been attending.

Lafayette said, “I would have been spending all day with them.”

To keep her spirits up she put up extra Christmas lights in her yard that day.

She’s glad to have a computer and know how to use Zoom to stay connected and worries about other seniors who don’t have the technology or know-how to communicate online with their loved ones.

Humphrey estimates that 40 percent of the seniors her group works with don’t have online capability.

“It would have been tough if I hadn’t had Zoom,” Lafayette said.

She and Hird both said, even though they’ve only met by phone, they have bonded.

“It’s very nice to have someone asking me how I’m doing,” Lafayette said.

And she finds Hird interesting to talk to.

“She’s lived in many places and we have many topics to talk about,” Lafayette said.

Ditto, Hird said: “I like the people I talk to, want to feel connected. It’s been such an honor getting to know these women, they have the best stories. I look forward to every Tuesday — my call day.”

Ellen Hill, the co-director of United Way of Lamoille County, said it had only been recruiting people to match with seniors for two weeks and already had 33 people signed up. And some of the volunteers have come back to her to ask for another senior to be matched with.

The organizations United Way of Lamoille County works with identify seniors who might be experiencing isolation, who may not have family or friends around.

Hill distributes a list of possible gifts specific to each senior to their corresponding volunteers, who then pick gifts and wrap them.

“It’s everything from a flannel shirt to art supplies to a book on local history, a 2021 calendar, things like that,” Hill said. “And a few people have actually reached back out to say, ‘Can I adopt a second person?’”

There are limitations to the connections that are made because it is anonymous – the volunteers function as sort of secret Santas.

Hill said some people who participate in the gift giving may be isolated themselves from parents who might live far away.

“People are just really seeking connections with this population in our own neighborhood, in our own backyard,” Hill said. “I think it’s giving them some real sense of connection, that reciprocity of reaching out and giving, even though it’s anonymous. I know these people who are sponsoring the seniors are getting so much out of it.”

Hill said she feels so fortunate to be the conduit to connect generous people with lovely seniors who might be experiencing some isolation.

“It’s something genuinely so small, but it’s really in essence so big,” she said. “And fun –at this time of our lives more than ever with COVID.”

Laurie Shapleigh, the life enrichment director at The Manor in Morrisville, said this is the senior living facility’s fourth year participating in the gift giving.

She said she is “unbelievably overjoyed” with the help from community organizations such as Lamoille South Supervisory Union whose staff and students pitch in to help bring Christmas to seniors.

The donated presents pile up in Shapleigh’s office which is now called Santa’s Workshop.

In the past they have had a large party with residents at The Manor to distribute presents, but this year on the Monday before Christmas they will have parties of six or fewer to stay within the governor’s guidelines for gathering size.

The residents are also into gift giving. She helps collect presents for needy families and she has residents of The Manor who love to help wrap them.

Maxine Adams is a social worker with Support and Services at Home. In normal times, much of her job involves meeting with seniors in their homes. She and nurse Pamela O’Neil work as a team to connect with seniors and help continue living in their own homes.

Support and Services at Home was created about 10 years ago to help reduce the cost of care for seniors going to nursing homes unnecessarily. Besides saving money it can be better for seniors’ physical and mental health if they can safely stay in their own home, she said.

Adams said it is now recognized that isolation is also a major factor in health.

She and O’Neil do need to enter peoples’ homes — taking precautions. They double-mask and wear gloves. Some people need to have in-person care, like lip readers, people for whom English isn’t their first language and those with certain health or mobility issues.

Adams sees the holidays this year as bleak and wishes she could do more to keep people’s spirits up.

However, she said, “I am quite amazed at how people are holding up. It may be because of lot of them went through the polio quarantine. We have seniors who were harmed by polio. They remember not being able to go swimming during the summer.”

Many of her seniors lived through World War II and the Great Depression — they’re pretty hardy. But, Adams said, the thing they miss is contact with their family and that’s hard to deal with.

She said she could use more volunteers.

The Lamoille Community Food Share served 791 area families turkeys and all the trimmings for Thanksgiving this year, and now has its sights on…