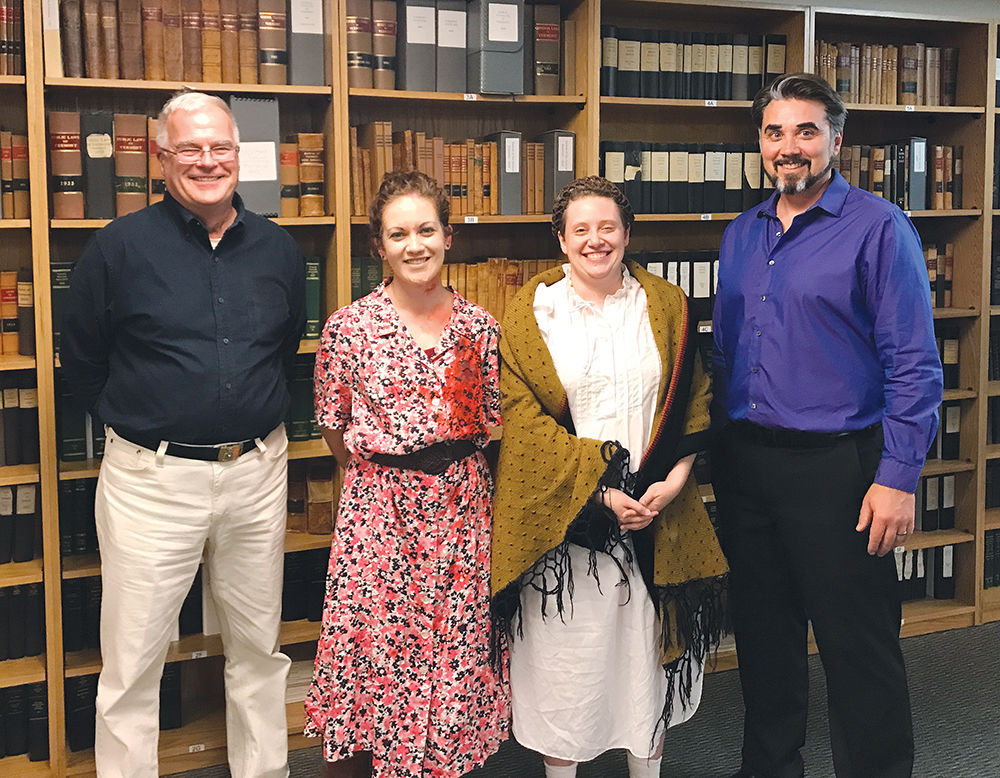 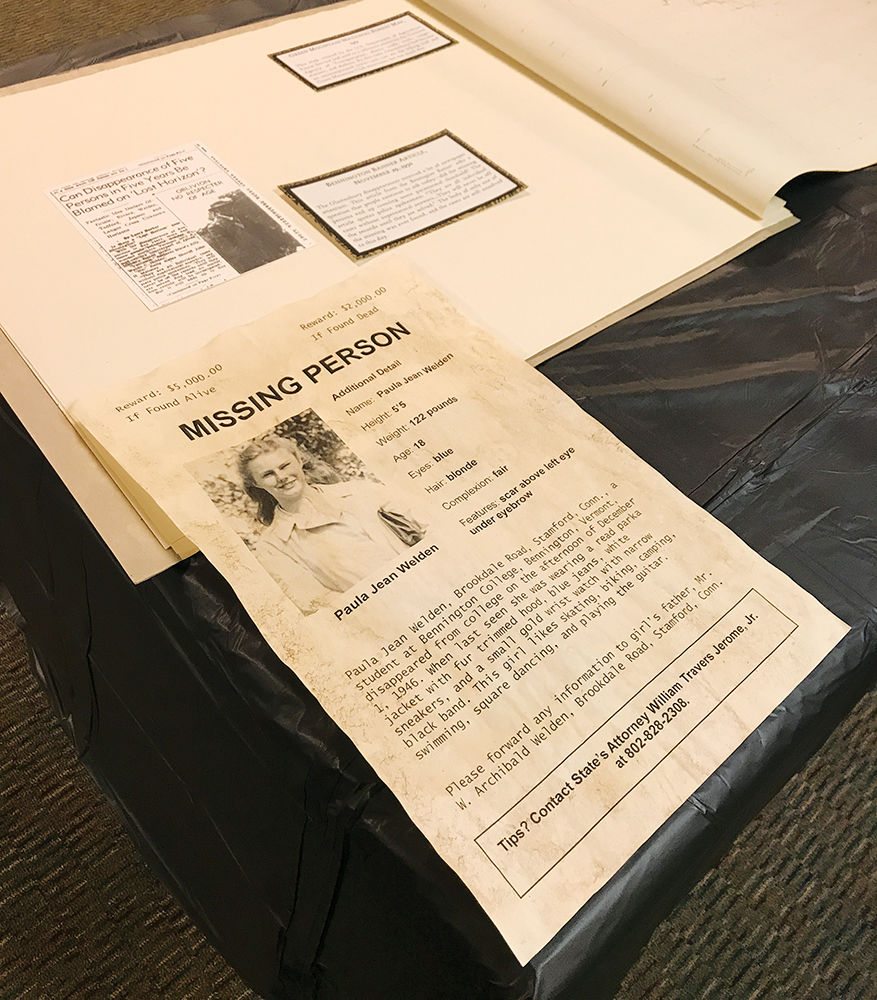 A portal to some fifth dimension near the foot of a mountain in southern Vermont. A train that jumped the tracks and plunged into the White River, killing more than 30 passengers. A vagrant who shot dead a young Essex Junction hotel worker who rebuffed his attempts at romance. A fortune teller who helped the Vermont State Police find missing people.

The dead and the missing usually leave something behind, whether it’s photographs or diary entries, newspaper stories or the acquired miscellany of officialdom. And much of that ends up in the Vermont State Archives.

Historians and researchers dug into the archives’ vast collection of primary documents to put together a set of four scary stories from Vermont’s past.

“Isn’t it possible that those physical objects carried with them an echo of those lost souls?” said Vermont’s “roving archivist” Rachel Onuf, who emceed the event. “Archival records are a bit like the undead, aren’t they? They just keep going.”

Waterbury historian and Stowe native Brian Lindner told the tale of one of the state’s most famous spooky spots, Glastenbury Mountain, near Bennington. He said numerous people went missing there in the 1940s, and were never heard from again. Seventy years later, some of them are still active police cases.

“There are so many victims, so many disappearances,” he said.

One person stepped off a bus in 1949, never to be seen again. Two others, in separate cases, went for a stroll and were never found.

In 1945, Middie Rivers and his son went hunting, and never came back. Rivers was an experienced woodsman who had been hunting his whole life.

A massive search party was sent out, some 500 people — “back then, your goal was to get hundreds of people to search,” Lindner said.

So, out came the Boy Scouts, the Army and the Vermont State Guard, “a well-regulated militia that backs up the National Guard,” and is still in existence today. There were employees from Bennington Mills and Benmont Paper Mill on the search, and the town select board even offered to pay $4 a day for people to help search — but no one took the offer.

All they ever found was a single bullet near a streambed.

In 1946, about a year later, a Bennington College student named Paula Welden told her roommate she was going to hike the Long Trail.

Welden vanished without a trace. Her case is still open, but it left a lasting legacy: In 1947, the Vermont State Police was formed, and to this day, that’s the agency that handles all missing person cases.

Linder used numerous sources from the archives in telling his tale: Vermont Transportation Agency maps; photographs from the Civilian Conservation Corps; municipal reports from the local towns; and newspapers, especially the Bennington Banner.

“Is it a fifth dimension, is it a mass murderer, is it a coincidence? You decide,” Lindner said of the half-dozen or so disappearances. “Maybe someday these cases will be solved. But probably not.”

The murder of Miss Mae LaBelle

State archivist Sally Blanchard-O’Brien had the evening’s tale of murder. She was dressed in period clothing — that period being 1911 — as she told her story, with bloody wounds on her.

She read from some of the deathbed statements of Mae LaBelle, an 18-year-old kitchen worker at Johnson’s Hotel in Essex Junction who was murdered by a fellow co-worker. The man, Arthur Bosworth, blamed the teenager for getting him fired because she had earlier rebuffed his advances.

On June 7, 1911, Bosworth waited at the train station for LaBelle to arrive on her way to work. She saw him and ran away, screaming through the crowd as he chased her with a revolver.

“Arthur Bosworth shot me four times,” read her deathbed statement. “The last few times, he was close to me as you are.”

Witness statements say he was “quick to temper and thought the world was out to get him,” and he had previously left his home in England after stabbing his wife.

LaBelle had said she felt uncomfortable with Bosworth’s advances and reported him to hotel staff. Witness statements later said Bosworth had talked to several people about his enmity against LaBelle, and was drunk and showing people his revolver even while lying in wait for her at the station.

To one person, he reportedly said, “That’s the bitch that did me the dirty work. Damn her. I’m gonna get even with her even if I kill her.”

In addition to the statements, Blanchard-O’Brien used Vermont Supreme Court briefs, newspaper reports, and even a letter from Bosworth’s mother to the governor, stating he “had taken to intoxicating liquors” and shouldn’t be tried.

His words at his sentencing: “That’s tough luck.”

A year after Bosworth’s trial, the hotel burned down. The fire started in the kitchen where LaBelle once worked.

Researcher Mariessa Dobrick told the story of the deadliest train crash in Vermont history, the 1887 derailing of the Montreal Express, on which 115 people were passengers.

Dobrick leaned largely on a Burlington Free Press story recited by one “Mrs. Bryden,” one of the survivors of the crash that killed 37 and injured 50.

Supplementing Bryden’s account were reports from the board of railroad commissioners, as well as Supreme Court briefs in a lawsuit brought against the Central Vermont Railroad.

According to Mrs. Bryden, she went to bed at 9 p.m., and had changed her sleeping berth to be closer to the washroom.

That was lucky. Bryden was awakened by the sound of the train derailing, and seconds later the car plunged off the bridge over the White River.

“How I passed those two seconds, I will never know,” she said. “They seemed eternal.”

Help came, and someone broke a hole into her sleeper car. Bryden had to remove all of her clothing, which “was the most horrible struggle.”

Some of the cars fell through the ice on the White River, each car set on fire by its stove, which in turn set the bridge on fire. The fiery chaos all happened within mere minutes.

“There was such confusion it was hard to tell what took place during those awful moments,” said Mrs. Bryden.

Last up was Chris Winters, deputy secretary of state.

He told the story of a fortune teller named Luvia Lafirira, who lived a long life from 1858 to 1962. And like many good spooky stories, his ended with a twist.

Winters was able to use the archives for his story because spiritualists and fortune tellers had to be licensed, as evidenced by a bill, Act 34, from the 1937 legislative session, “prohibiting the practice of fortune telling without a license.” It included horoscopes, palmistry and mind-reading, and an annual tax of $5.

“There was no test to take, because what would be the point, being a fortune teller? And there was no proof of any ability required,” Winters said.

At 18 years old, the licensed Lafirira of Plainfield was advertising her skills in the Barre Times. She helped people find stray belongings, livestock and other people. She said it was like remembering how a friend you haven’t seen for a long time looks or sounds.

Lafirira helped hundreds of people, especially in the area between Barre and St. Johnsbury, and was even able to give her fortunes over the phone further away.

Once, she told the parents of a lost little boy they could find him at a sugarhouse in the woods — and they did, cold, but alive.

The state police also leaned on Lafirira’s visions. One time, they were looking for a man who lived by the railroad tracks, and Lafirira told them to walk until they found a personal item of his, and they’d find him “near a big round wheel.” The police set off down the tracks and found a matchbook, and left the tracks to find the man next to a large spool that had once held steel cable.

Winters said Lafirira was fond of recounting how she had passed her gift on to her children. Or, perhaps to her great-grandchildren?

“Personally,” Winters said, “I think not — or at least not yet. And I should know, because I am Luvia’s great-grandson.”