You have permission to edit this article.
Edit
Home
State And World
Calendar
Special Publications
Multimedia
Marketplace
Classifieds
Contact Us
Follow Us
1 of 4 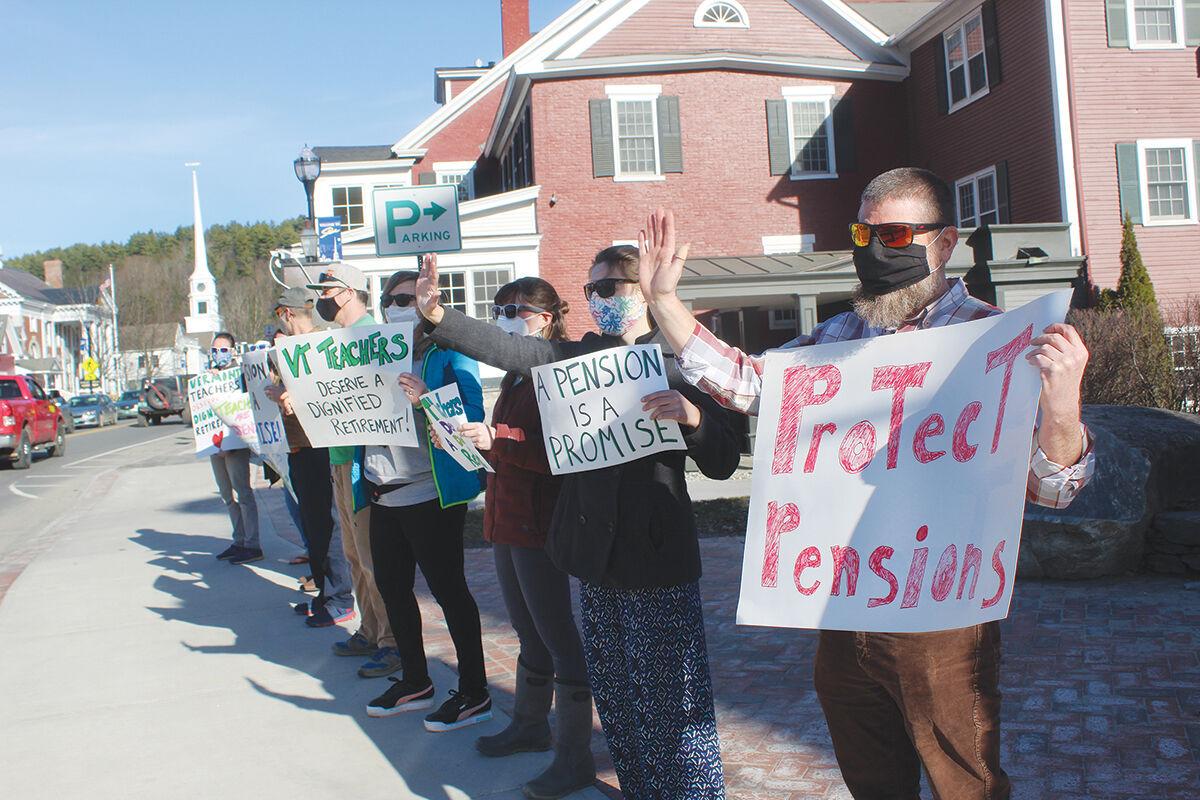 Dave Smith, sixth grade language arts and humanities teacher at Stowe Middle School, protests with other teachers in Stowe over a proposed public pension overhaul. “The Legislature is about to make a big mistake by trying to balance the budget on the backs of teachers,” Smith said. 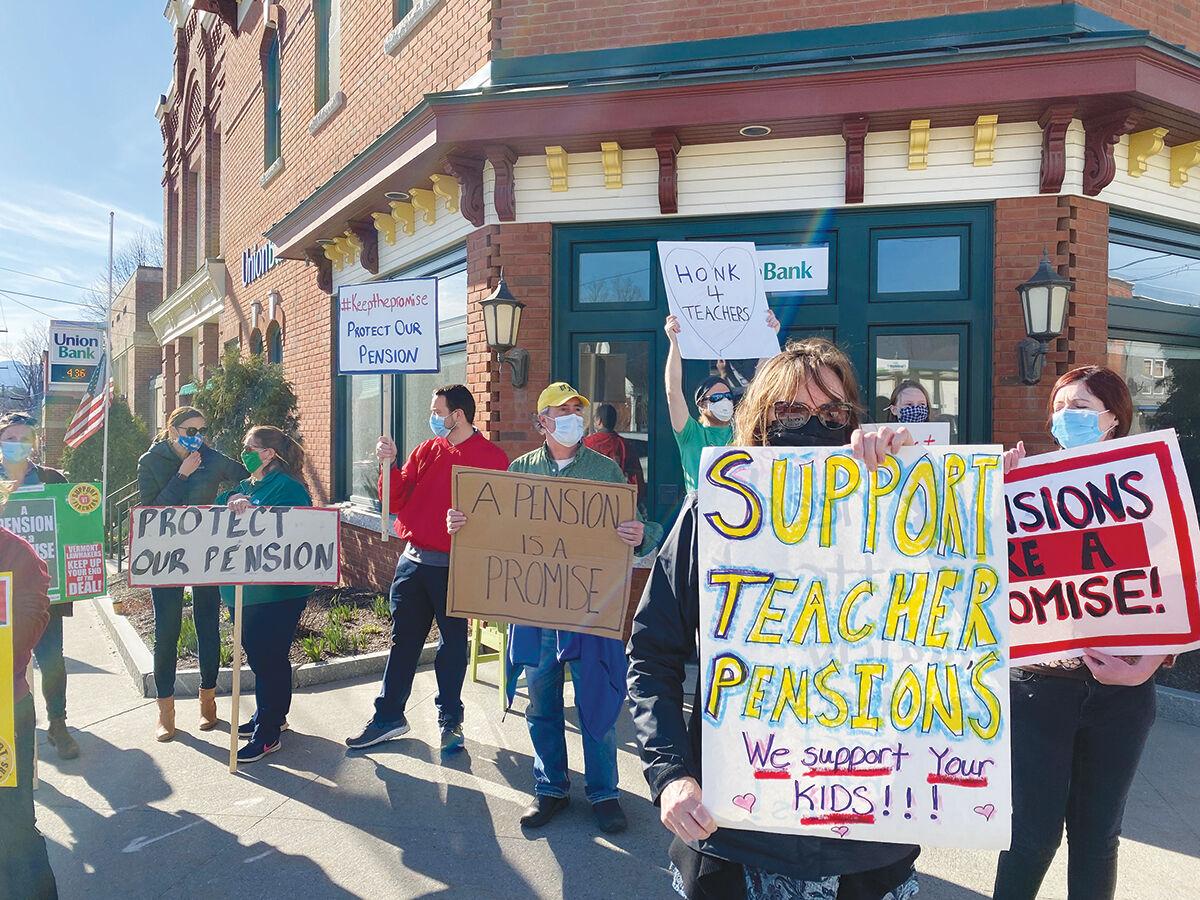 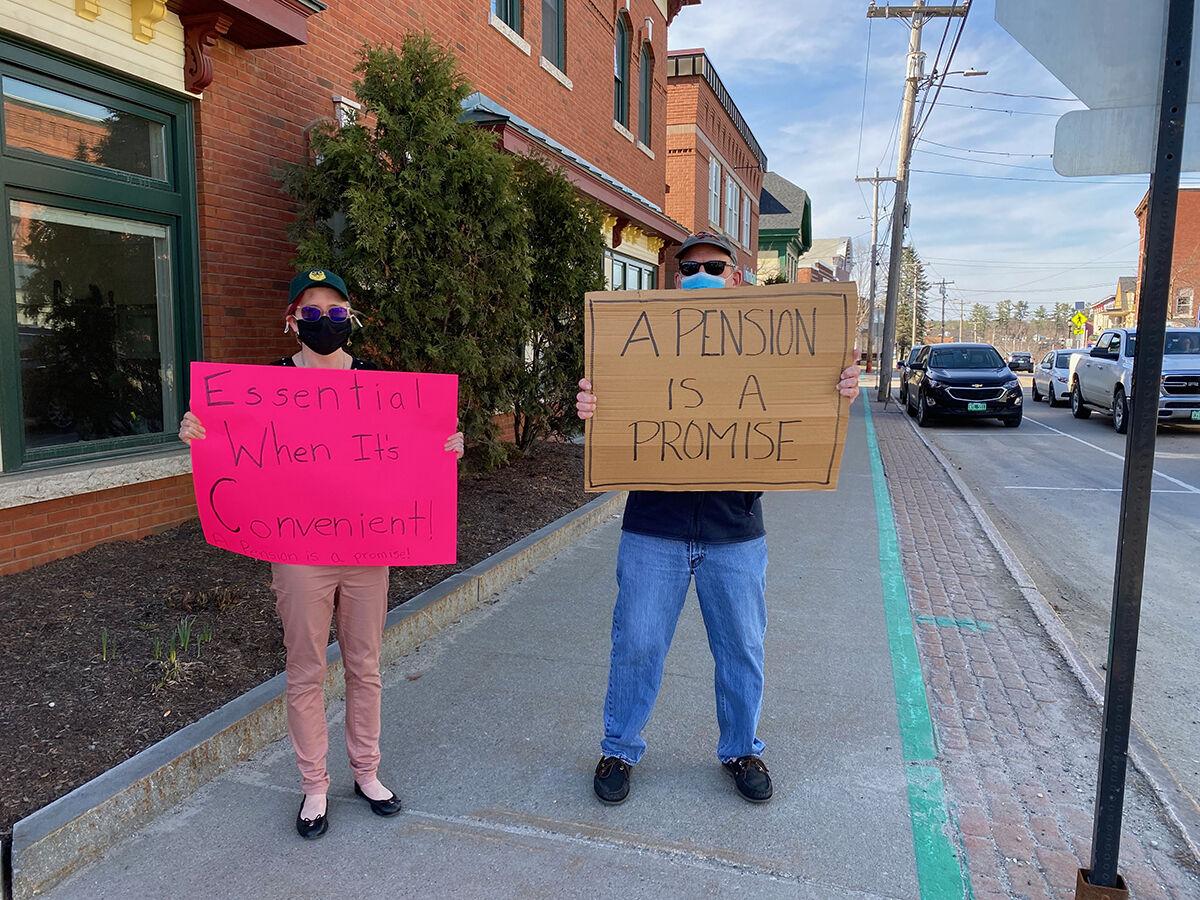 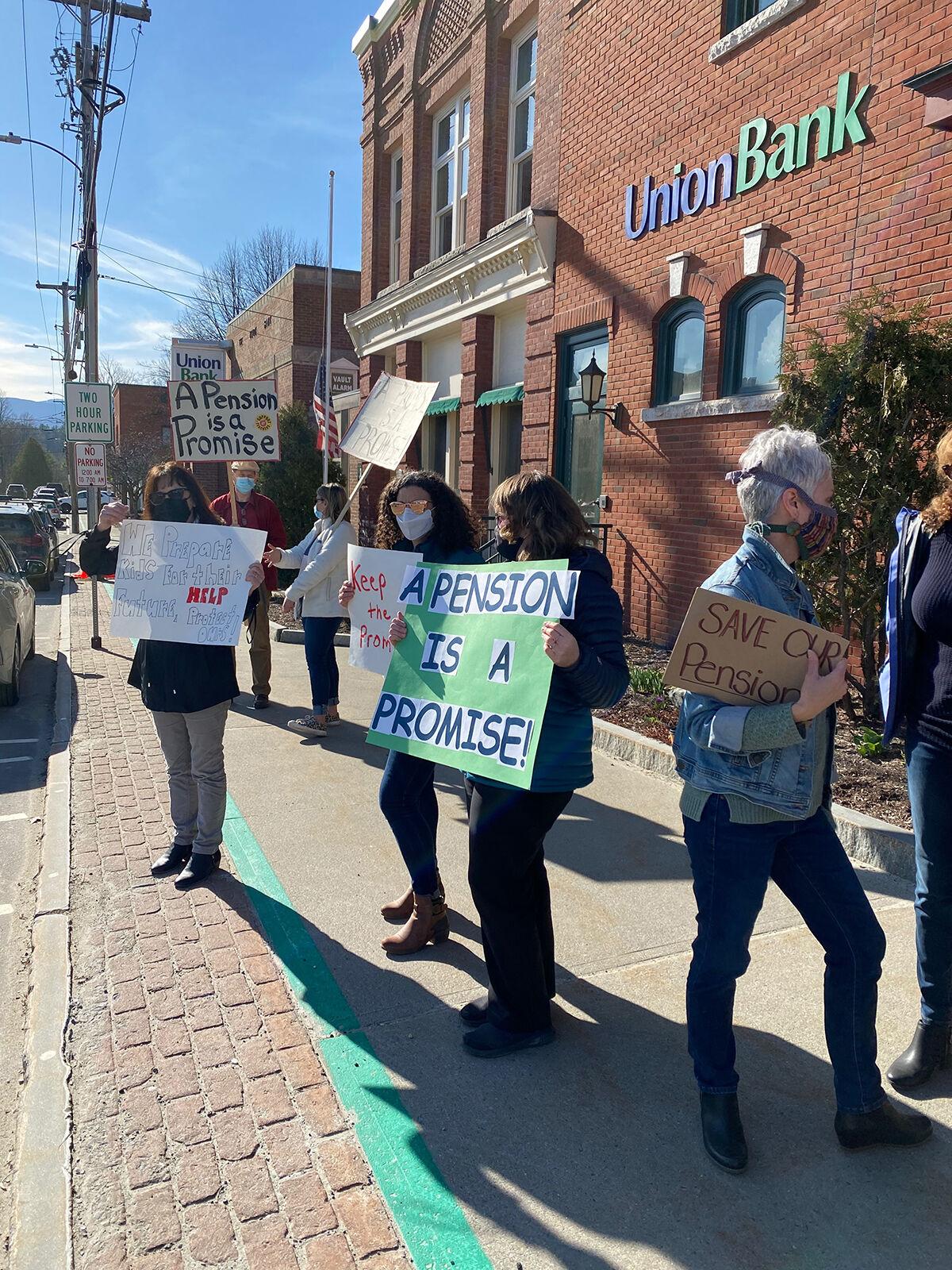 Dave Smith, sixth grade language arts and humanities teacher at Stowe Middle School, protests with other teachers in Stowe over a proposed public pension overhaul. “The Legislature is about to make a big mistake by trying to balance the budget on the backs of teachers,” Smith said.

Legislators got an earful from educators and state employees furious about a proposed pension system overhaul unveiled last week during more than four hours of emotional public testimony given Friday and Monday evening.

Sometimes cradling crying infants, the state’s teachers, troopers, substance abuse counselors and public defenders called in from homes and offices across the state to call the pension proposal a “a gut punch,” “shameful” and a “shocking moral failure.” Many argued the plan would force employees to work longer and ultimately cost taxpayers anyway, since older workers are at the top of the pay scale, while also driving young Vermonters — which the state so desperately seeks to retain — to turn to the private sector or leave the state entirely.

Patrick Southern, a software developer for the state, called the plan before lawmakers “foolish and shortsighted.” As an IT worker, Southern said he regularly received — and rejected — offers from private employers offering to pay two to three times his current salary. And while he had recently referred someone to a state job that had been difficult to fill, Southern told lawmakers on Monday he changed his mind, telling his friend to take a higher-paying gig in the private sector instead.

“Who knows, maybe we’ll both end up as contractors charging taxpayers over a million dollars for a simple project that would cost 20 grand if they could retain the developers,” he said.

The pension debate comes a year into the pandemic, and thousands who would be affected have been on the frontlines of Vermont’s response. Jen Zoller, a contact tracer with the Department of Health, told lawmakers she had worked evenings, weekends and every single holiday since the crisis had started.

“How do you thank the Health Department for our tireless work through Covid and then rip away our pensions in the same breath?” she asked.

In January, Beth Pearce, the state’s treasurer, dropped a political bomb, recommending painful cuts to the state employee and teacher pension systems in an effort to keep the system afloat in the long term. Top lawmakers in the lower chamber kept their cards close to the vest for months, working behind the scenes to craft a response, which was finally released Wednesday in the House Government Operations committee.

Between trimming benefits and asking for higher contributions, the House proposal would cost school workers a cumulative $300 million. For state employees, the cost would be about $200 million. Legislators are offering to pitch in more state dollars, too — an extra $150 million one-time contribution. (The proposals in play would not touch benefits for current retirees or those within five years of retirement.)

There are many reasons why Vermont finds itself staring down the barrel of a nearly $3 billion unfunded liability in its state employee and teacher pension systems. The funds have consistently fallen short of expected returns, and demographic trends also contribute to the problem. But one of the biggest culprits has been several generations of Vermont’s political leaders, who for decades shorted their contributions to the system.

Since the mid-2000s, Vermont has been making the required contributions, and then some, in an effort to begin paying down the system’s ballooning debts. But workers who testified Monday and Friday bristled that this latest overhaul put the burden mostly on workers.

“You didn’t play by your own rules. You borrowed Peter to pay Paul. You stole from us. And to add insult to injury, you’re about to mandate that we pay for your losses. Please clean up your own mess.”

“You didn’t play by your own rules. You borrowed Peter to pay Paul. You stole from us. And to add insult to injury, you’re about to mandate that we pay for your losses. Please clean up your own mess,” Susan Oliveira, a school counselor living in Ferrisburgh, told lawmakers.

Instead of asking workers to contribute more out of their paychecks and ultimately collect fewer benefits, the unions representing state employees and teachers have called for an income tax on Vermont’s one-percenters. Many testifying Friday evening and Monday echoed their calls, but the proposal appears to be a political nonstarter.

A last-minute push by House progressives to pass such a levy failed resoundingly Friday, with a majority of Democrats voting against the measure. In an interview after the vote, House Speaker Jill Krowinski, D-Burlington, said the Democrats shouldn’t pursue solutions Republican Gov. Phil Scott would veto anyway.

“I think it would be really unfortunate for our state if we went through this entire process and had a veto, and we weren’t able to override it,” she said.

Roughly 20,000 Vermonters likely would be affected by the proposed changes — a disproportionate share of which are women who make up about three-fourths of the teaching workforce and a slim majority of state employees. This is also the first major political test of Vermont’s newest legislative leaders, who, for the first time in history, are women as well.

“It’s not lost on us that this proposal is being forced through by a speaker who has historically worked for women and children and now is leading this attack on women and children,” Michelle Salvador, a substance misuse prevention consultant, told lawmakers Monday.

The House’s pension proposal has not yet received a floor vote, and the Senate is waiting to see what the lower chamber votes out before beginning its work. On Sunday evening, Senate pro tem Becca Balint, D-Windham, weighed in with a Facebook video, apologizing to workers for the proposal’s “crappy” timing given the pandemic.

“It’s incredibly hard, and I want to acknowledge that,” she said, adding later that “if we don’t take action, there’s danger that the system will become insolvent.”

“We are doing everything that we can to learn about how we got to this situation. Figure out what we can so that we aren’t in this situation a few years from now and make sure we have a viable pension system,” she said.

Read more at VTDigger.org (‘A gut punch’: Teachers, state employees have their say on pension reform).

House Speaker Jill Krowinski, D-Burlington, has abandoned a controversial proposal to reform the state’s pension system. At a press conference…