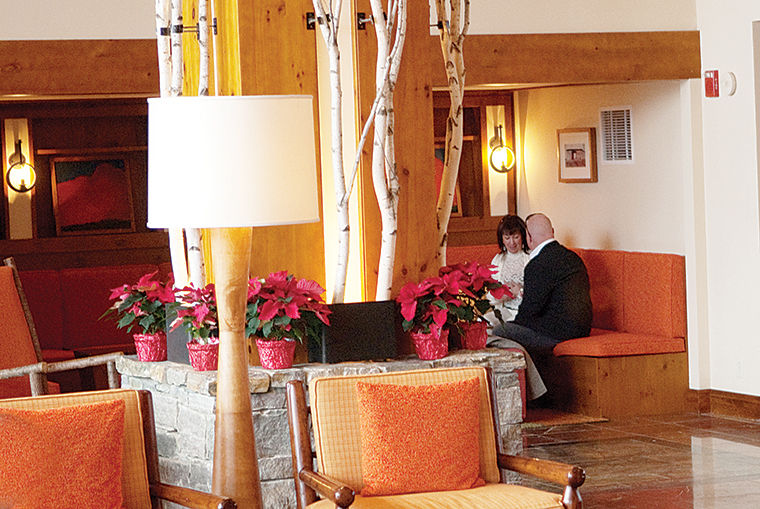 Mark ushered Lisa to a small nook in the corner of the room. There was something that he wanted to give her. 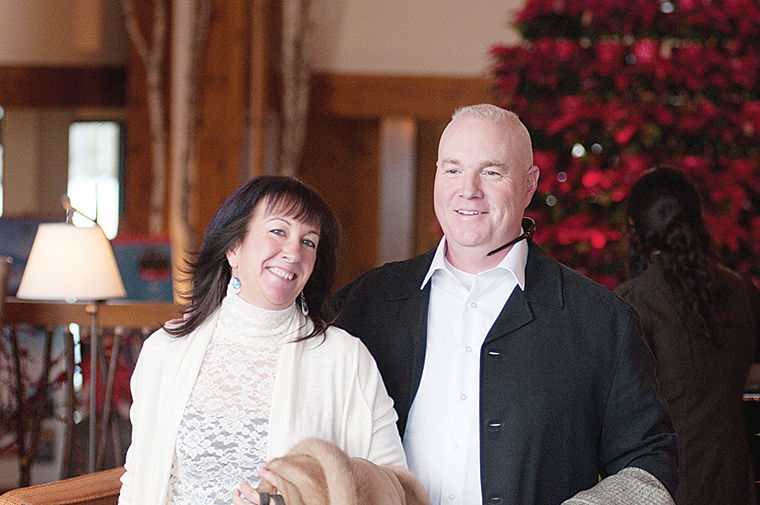 Lisa wanted to take the giant leap from “I will” to “I do” — right then and there. 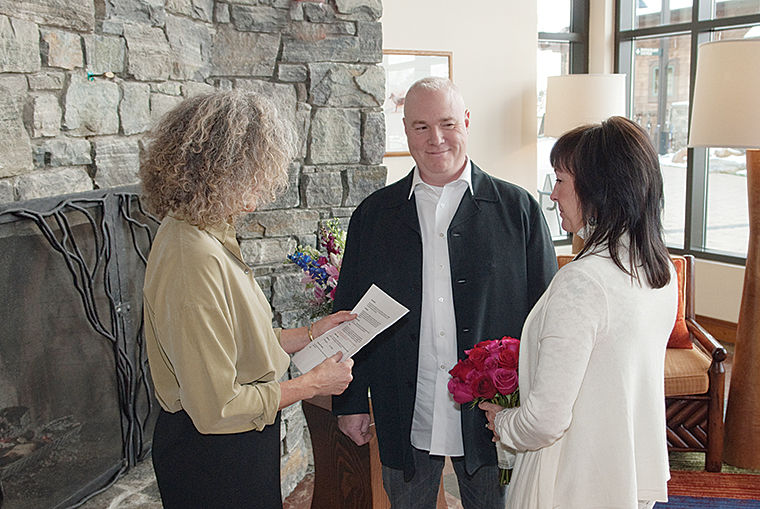 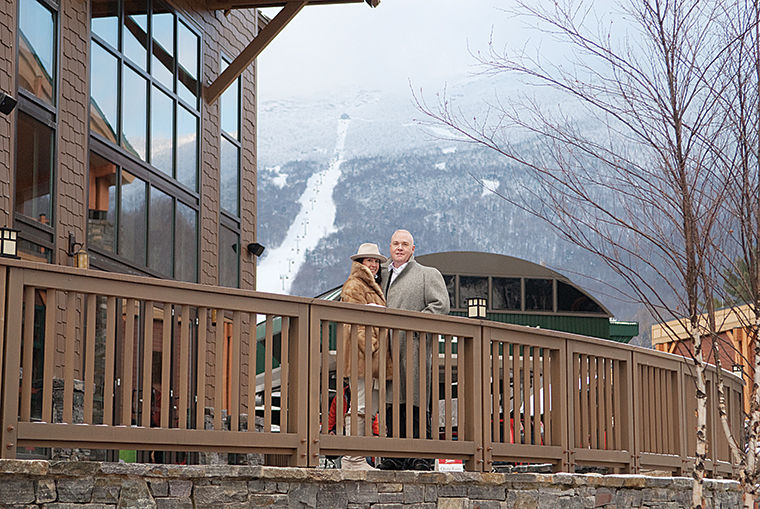 “I wanted to give Lisa a true surprise, one which would be etched in her mind, filled with emotion, and truly special,” Mark said.

Mark ushered Lisa to a small nook in the corner of the room. There was something that he wanted to give her.

Lisa wanted to take the giant leap from “I will” to “I do” — right then and there.

“I wanted to give Lisa a true surprise, one which would be etched in her mind, filled with emotion, and truly special,” Mark said.

Most women love surprises — just don’t unhinge their wedding-day plans. That is the one day in a woman’s life when there is little room for the unexpected.

But for bride Lisa Malley, there was no wedding-day plan. Minutes before the ceremony, she wasn’t even engaged.

Little did she know when she and boyfriend Mark Bonser walked into a Stowe hotel lobby on a blue-sky December day that she’d be getting engaged and married in less than an hour’s time.

The couple met in 2008 when Mark, a Burlington-based general contractor, gave Lisa an estimate for some roof repairs. He didn’t end up getting the job, but he did find himself a date to a New Year’s Eve party several months later. And so began a three-year romance.

They had talked about getting married someday, but both had been married before, and didn’t feel that a big affair suited them.

“We decided that we’d ‘just do it’ and then we’d come back and tell everyone and have a party,” Lisa said.

But that’s where the conversation ended.

As Lisa’s 50th birthday approached this past December, Mark kept his plans close to the vest.

“What I knew was that he was telling people that I had plans for the weekend,” Lisa said.

Lisa’s birthday was on Sunday, Dec. 19. On Saturday night, she opened the birthday gifts that Mark had stashed under the Christmas tree.

But, knowing Mark’s generous nature, she didn’t suspect a thing. “Mark isn’t someone who just buys you a shirt. It’s the whole outfit,” she said.

Then he told her the plan for the next day — or at least part of it. They were going to Stowe for lunch, and he said: “If you’re well-behaved, we’ll stay overnight.” Mark had already packed her suitcase.

So on her 50th birthday — dressed in her new winter white outfit and the fur coat that Mark had given her the year before, Lisa hopped in the car with Mark and they headed to Stowe.

“I didn’t ask where we were going,” she said.

When Mark pulled into the porte-cochere at Stowe Mountain Lodge, Lisa was pleasantly surprised. But things were about to get a lot more interesting.

Minutes later, as they reached the top of the stairs in the hotel lobby, Mark ushered Lisa to a small nook in the corner of the room. There was something that he wanted to give her.

That “something” was a proposal poem that he had written and slipped inside an envelope marked “Happy Birthday.”

But that wasn’t all. Mark had lined up a justice of the peace and a photographer, just in case Lisa wanted to take the giant leap from “I will” to “I do” — right then and there.

“We walked over and met them, and they got me some water,” Lisa recalled. “I kind of collected myself, and we got married right there” by the stone hearth in the hotel lobby.

Mark wasn’t the only one who breathed a sigh of relief once the cat was out of the bag.

Both Asam and McInnis were more than a little apprehensive about the idea of a “surprise” wedding. What if she said no?

“I was so nervous,” McInnis recalled. “I’m not usually that nervous before a wedding.”

McInnis and Asam were hiding behind pillars in the lobby when Mark and Lisa arrived.

Mark’s original plan — to propose in two rocking chairs at the top of the stairs — was foiled when he discovered that the seats were already taken.

“I was set up with the tripod and then he came to the top of the stairs and dove off into this little side area,” Asam said. “So now, there I am sneaking around with a tripod, trying to get to a new location without her noticing me.”

While Larry was lurking behind a pillar, trying to get a shot of the engagement scene, McInnis was craning her neck for a better view. From her vantage point, she couldn’t see how it was going.

“I’m jumping up and down and asking, ‘How do they look?’” McInnis recalls. “And Larry said, ‘I think it’s going well. He looks happy.’”

“I have to say I’ve never done anything like that before,” said Asam, who’s been photographing weddings in Vermont for more than 25 years.

Mark had written his vows ahead of time. But Lisa, a self-described go-with-the-flow person, happily read his back to him — with a little ad-libbing.

“This was the shortest engagement in history,” McInnis said with a laugh,  “from one side of the room to the other.”

“I got to enjoy my wedding for everything a marriage ceremony should be,” Lisa said. “I just got to show up and get married to the most wonderful man. There’s nothing that I would change. … Every single thing that he did, I loved.”

Mark decided last summer that he wanted to “put something together” by the end of the year. “I knew I wanted to do something special, but different,” he said.

All the pieces began falling into place when he contacted Calais Lovejoy, catering manager at Stowe Mountain Lodge, in November.

“Far too often, each and every step we take in life must be planned, researched, balanced and judged,” Mark said. “I wanted to give Lisa a true surprise, one which would be etched in her mind, filled with emotion, and truly special.”

Without a doubt, Lisa was surprised — twice.