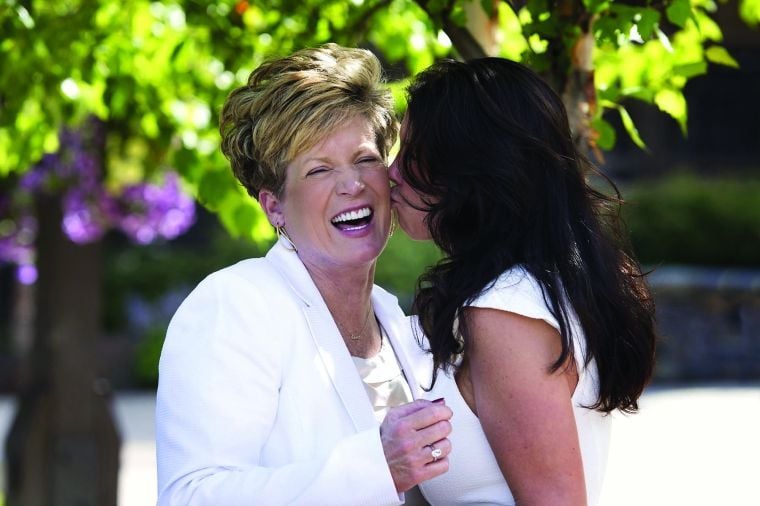 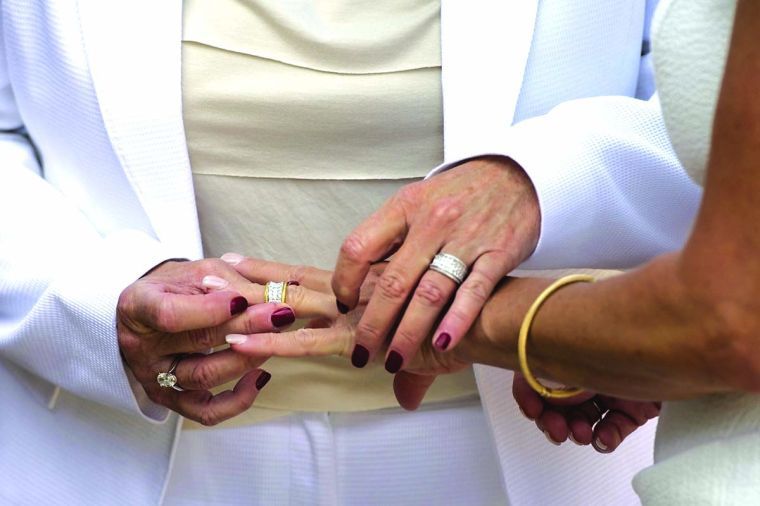 Tennessee does not recognize same-sex marriages and Lambert and Stanfill live in an area where homosexuals often hide their relationships to avoid being ostracized. 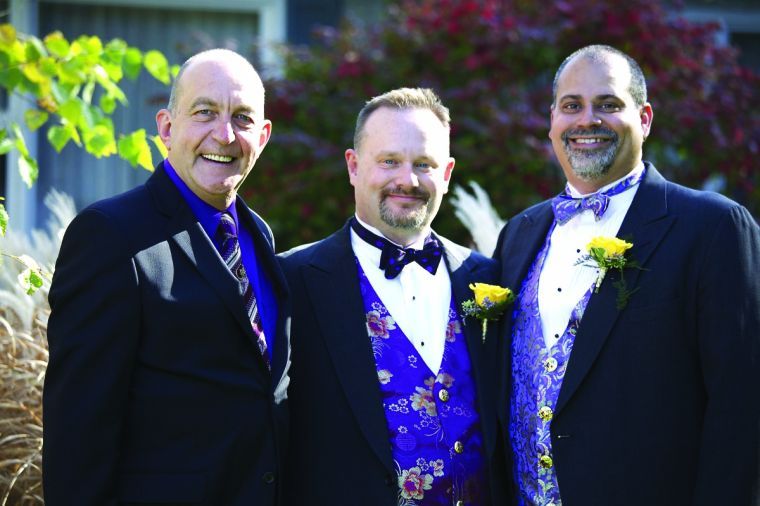 A longtime friend of Cooley, Bob Bolyard, officiated at the ceremony.

Tennessee does not recognize same-sex marriages and Lambert and Stanfill live in an area where homosexuals often hide their relationships to avoid being ostracized.

A longtime friend of Cooley, Bob Bolyard, officiated at the ceremony.

When Regina Lambert and Jackie Stanfill of Tennessee decided to get married last summer, they came to Stowe.

“We wanted to go somewhere special and different,” Lambert said in a telephone interview.

“We have friends who ski and we’d heard about Stowe. We started to talk to people who’d been there and didn’t hear a negative word.”

Tennessee does not recognize same-sex marriages and Lambert and Stanfill live in an area where homosexuals often hide their relationships to avoid being ostracized. They traveled to Stowe with another same-sex couple who also got married but asked that their names and photos not be included in this story because they feared the repercussions they might face in their home state.

Lambert and Stanfill were surprised and touched by how well they were received in Vermont.

“When I was looking for a justice of the peace and photographer, every single person was so welcoming and kind and helpful we knew we were going to the right place,” Lambert said. “People were just wonderful. We didn’t meet one person who didn’t treat us better than we could have expected. It was amazing.”

Still, as they posed for their wedding photos outside Stowe Mountain Lodge after their ceremony, it took a few moments for them to feel comfortable.

“There were some nerves posing with your girlfriend,” Lambert said. “We don’t even hold hands here (in Tennessee).”

Lambert and Stanfill were vacationing in the South of France with friends and family when they learned of the Windsor decision and decided to tie the knot.

After being in a committed relationship for a quarter of a century, they were eager to take advantage of the federal benefits and protections marriage could provide.

“In May 1988, when Jackie and I first got together, we never thought we’d get married,” Lambert said. “The world has changed so much in these 25 years.”

The couple exchanged rings several years ago, but didn’t formally celebrate their commitment until their wedding in Stowe.

Lambert, an attorney and openly-gay adjunct university professor, received cards of support from her students after the Windsor decision.

“They expect to get married someday,” Lambert said. “It’s a different world.”

Lambert is working to change laws that prevent same-sex couples from enjoying the same rights as their heterosexual counterparts. She’s one of the attorneys representing a group of same-sex couples who have filed a lawsuit against Tennessee’s Defense of Marriage Act.

The lawsuit, Tanco v. Haslam, seeks to have Tennessee legally recognize the marriages of same-sex couples who were married while residing in states that recognize same-sex marriage.

Lambert and Stanhill arrived in Vermont on Aug. 15 and got their marriage licenses at the Stowe town clerk’s office. Afterward, workers from the clerk’s office took their photo on the town hall steps.

They were married at Stowe Mountain Lodge the following afternoon, Aug. 16. Justice of the Peace Cubby Momsen officiated and photographer Larry Asam took their wedding portraits.

They celebrated with a bottle of champagne sent by friends and a special dinner at the Lodge.

“The lodge sent us every dessert they had,” Lambert remembers. “It was such a nice experience.”

After returning to Tennessee, they held a reception for their families and friends on Aug. 31.

“It was an overwhelmingly positive response,” Lambert said.

Paul Andrew “P.A.” Cooley and Orlando DeJesus of California met in 2009 through a gay dating website.

They were married at the Golden Eagle Resort in Stowe last fall.

“I was sure I wanted to be with him for a long time the first weekend we met,” Cooley said.

They decided to get married for the same reasons as most couples.

“We are very much in love and plan to be together forever,” DeJesus said. “We thought it was the right time. We were hopeful that DOMA would change and thankfully it did between the time I proposed to P.A. and the day of our wedding.”

Cooley, who grew up in Vermont, wanted to hold their ceremony here so that his elderly parents could attend.

“Our wedding [date] was chosen to pick up the full impact of leaf peeping season,” Cooley said. “Autumn is my favorite season and it can be pretty spectacular in Vermont. As for Stowe, well, it is one of the most beautiful towns in Vermont and there are gorgeous views everywhere. I hadn’t been to Stowe in over 25 years and I was pleasantly surprised at how it kept the charm of a Vermont town, while still being one of the state’s biggest tourist attractions.”

Their plans hit a snag when a misunderstanding left them scrambling to find a new venue just two months before the wedding.

“We live 3,000 miles away and no one in our family was really able to pull together an emergency relocation,” Cooley said. “It was clear we needed professional help. I searched wedding planners in Stowe and an angel came to our rescue. Nancy Jeffries-Dwyer of Njoy Events saved the day.”

Within a few days Jeffries-Dwyer had arranged a simple, but elegant reception.

“The wedding was everything we wanted it to be and then some,” DeJesus said. “The facility was perfect. The staff at the Golden Eagle Resort bent over backwards to make sure our event went smoothly. The weather was better than we could have wished for in October — sunny and 68. Someone was really looking out for us.”

A longtime friend of Cooley, Bob Bolyard, officiated at the ceremony, making the couple and their guests laugh and cry.

While Cooley and DeJesus felt that their relationship was valid in the eyes of their family and friends before they tied the knot, they appreciate the legal rights that marriage has provided them.

Although friends and family recognized the legitimacy of their relationship without the official marriage certificate, Cooley said, the passing of the gay-marriage law and repeal of DOMA “has strengthened us as well as other gays and lesbians by having our rights recognized.”