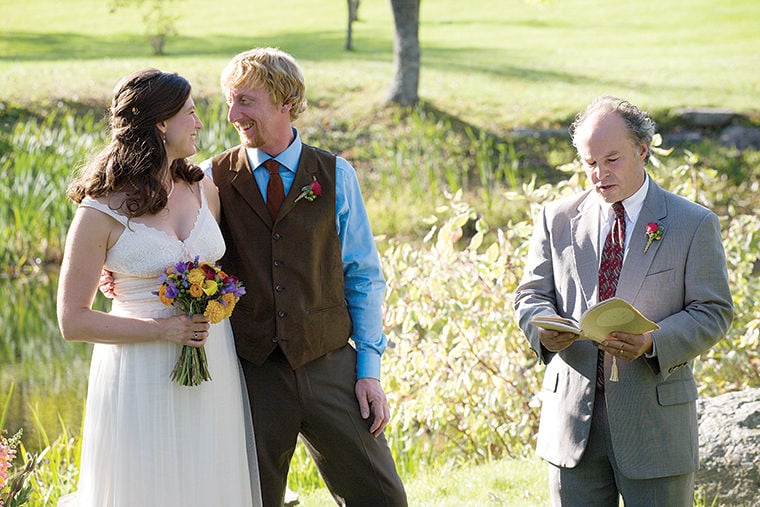 Looking back, I realize we had no idea what we were doing. But, decision by decision, brushstroke by brushstroke, like an abstract painting, an evocative shape emerged. 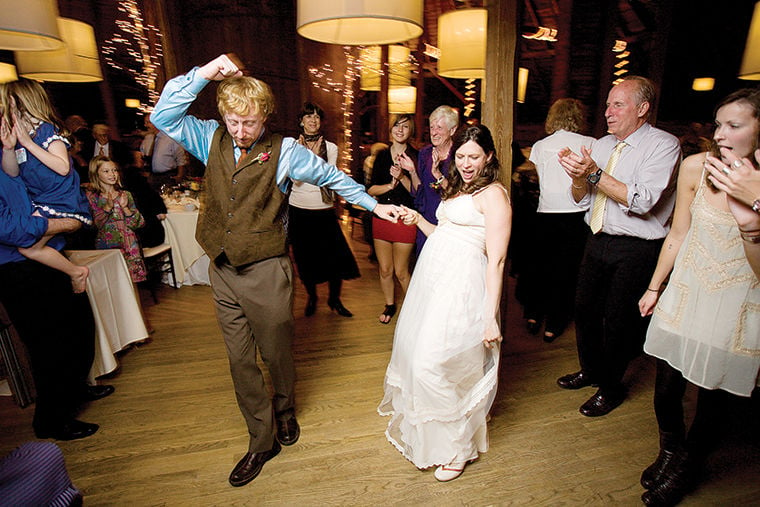 Looking back, I realize we had no idea what we were doing. But, decision by decision, brushstroke by brushstroke, like an abstract painting, an evocative shape emerged.

I never spent time as a girl or a young woman imagining my wedding. I didn’t dream about what it would look like or where it would be. Perhaps because I wasn’t sure I would ever want to get married until I met my husband on the Saturday of Labor Day weekend 2009 — the blind-date breakfast that changed my life.

The closest I came to a vision was a few years earlier, while rowing on the Connecticut River. The crew team I trained with then practiced mostly on the stretch of water between Norwich and Thetford. Once, after a hard piece, I found myself staring at a long meadow along the bank while trying to catch my breath. I flashed on an image of me there at some hazy point in the future, walking down an aisle of crossed oars.

That idea fit only if I had gotten hitched to another rower, and my husband isn’t. An avid snowboarder and mountain bike enthusiast, he dreaded the idea of leaving the Green Mountains for the hills of “Verhampshire.” That’s why I sold my house and moved here, with my solo rowing shell, a roof rack and a downloaded map of the Waterbury Reservoir.

He is a man who lives in the moment and also hadn’t ever given the possibility or particulars of a wedding much thought. Neither of us belongs to any religion, so there was no traditional format we needed to follow. What was important was gathering our friends and family to witness and support our lifelong commitment. We knew we wanted to have a hell of a party afterward and hoped the ceremony could be outside.

So, last year, when it came time to plan, we were both at a loss. Our first decision was that it would be easiest to marry in central Vermont, in or close to Stowe, where we live.

We were lucky that the area is a popular destination for couples from around the country. When thinking about a reception site or catering or flowers and decorations, there are dozens of locations and businesses, many able to accommodate a wide range of budgets. But it wasn’t long before we were overwhelmed by the choices before us and the variety of options.

We didn’t begin with the overarching theme that wedding guides often suggest. We just got started, touring inns and hotels and outdoor centers as often as our work schedules allowed. We went on intuition, feeling out the possibilities. Looking back, I realize we had no idea what we were doing. But, decision by decision, brushstroke by brushstroke, like an abstract painting, an evocative shape emerged.

The day before our October 2011 wedding at the roundbarn in Waitsfield, we were elbow-deep in art paper, stencils and glue when it hit me. I looked down at the table signs we were making and the thank-you gifts we were wrapping and realized we actually had a theme after all. And it suited us so well, I wish I could say that we had planned it from the beginning.

In details small and large, we invoked the beauty and durability of mountains and bodies of water and their importance to us individually and as a couple.

We started down that path unintentionally when I stumbled upon the work of the New Hampshire-based ceramicist Megan Bogonovich. Along with her studio art, Megan creates cake toppers in which the traditional bride and groom figures have fanciful heads and tails. Through her shop on Etsy, Melabowed, she sells a robot groom or a unicorn bride and a wide variety of animals.

After toying with the idea of two antelopes — a reference to a Phish song — I settled on a mountain goat groom and loon bride. I initially thought of the topper as a kooky take on a treacly tradition. But I saw later that it was that piece that brought everything together, showing creatures at home in these two different elements coming together.

Then we concluded that we wanted some sort of group participation in the ceremony. Since we were children, each of us had been picking up rocks with intriguing colors and textures to mark important places or times. We collected more on early hikes together and from the bench on the crest of the Pinnacle in Stowe, where we wrote our vows.

By Columbus Day weekend, we had enough so that each person coming could hold one during the event, imprinting it with his or her own feelings and wishes. The glass bowl of them is now one of our most prized possessions.

Later, we saw a card for Green Stone Artisans, a local company that makes vases and candle holders, and many other items, out of unusual stones. We got some as tokens of appreciation for family and friends who helped us during the wedding.

Then we needed to create some sort of order for our reception seating chart. Wed our table “Quechee Gorge” after the place we met. Some of my family sat at “Lake Michigan,” while local friends were grouped at “Little River” and “Moss Glen Falls.”

In the end, it wasn’t just me that picked up on our accidental theme. Many of our loved ones mentioned it in our guest book, hand-covered in Japanese wave-patterned paper by Elissa Campbell at Montpelier’s Blue Roof Designs. We especially liked a message from my husband’s uncle, who wrote, “May the gods and goddesses of mountains and waters continue to bless and follow you all of your lives.”