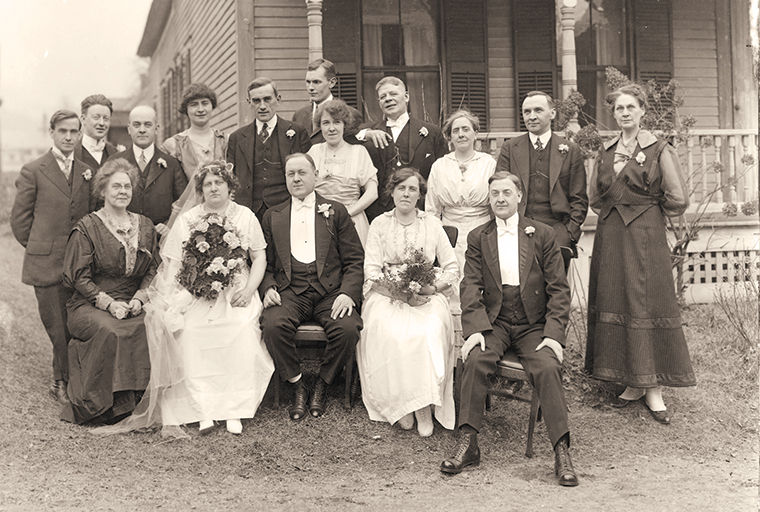 This working-class family wedding took place in the Bellows Falls area in 1916. 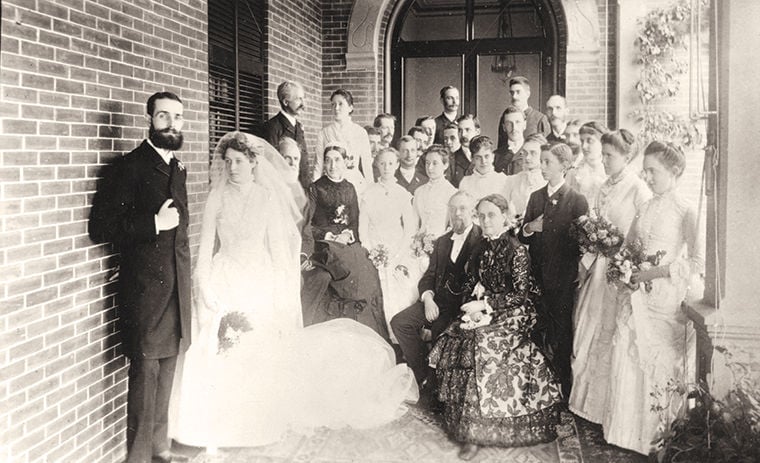 This 1886 photo shows the Franklin Fairbanks family on the occasion of their daughter’s high Victorian wedding.

This working-class family wedding took place in the Bellows Falls area in 1916.

This 1886 photo shows the Franklin Fairbanks family on the occasion of their daughter’s high Victorian wedding.

Pinching pennies for your wedding in this economy? Don’t fret — think of it as an old Vermont tradition.

Throughout much of the 19th century, ceremonies for Vermonters tying the knot could be summed up in two words — “small and simple,” says Jacqueline Calder, curator of the Vermont Historical Society collection and museum in Barre.

“Certainly they would have had vows and the exchange of rings, but not a lot of them wouldn’t have had anything like dancing,” she says.

The farmers, loggers and tradesmen of Vermont’s past are famous for living off the land and getting by with whatever they could scrape out of the rocky dirt. That old New England mentality extended to getting hitched.

“Vermonters were not a wealthy group,” says Jan Albers, executive director of the Henry Sheldon Museum Of Vermont History in Middlebury. “Most weddings were fairly low-key, maybe just family and some of their closest friends. They didn’t tend to have big blowouts.”

From the guest list to the wedding dress, an old Vermont wedding was about making something special with what little there was to go around.

“People couldn’t afford to spend a lot of money on one day,” Albers says. “They might have had a very simple wedding in the town church and then maybe a small reception at home. They would usually make their own food, and sometimes it would just be cake and lemonade.”

In some cases, a minister would simply visit the house to bless the bond, says Calder.

“They wouldn’t necessarily have the same reception we’re used to today,” she says. “In most cases, they didn’t even have music. It was a very solemn occasion.”

They may have been small, but a wedding in a small town was big news, said Paul Carnahan, librarian at the Vermont Historical Society.

“They were often covered in minute detail on the front pages of newspapers,” he said.

If there’s one emblem of what an old Vermont wedding was all about, it’s the wedding dresses of the time, which are often the only surviving record of the occasion in historic collections.

“19th century wedding dresses were colored, usually dark maroon or brown,” says Albers, whose museum featured close to 30 old dresses in their collection in a recent exhibit. “The reason for that is that your wedding dress had to be your good dress from then on. People couldn’t afford to make a dress for one day.”

Dressing in your “Sunday best” as it was called was about all the average Vermonter could afford. Picking darker colors, which could get dirtier without showing, was the way to go. Women would often modify one dress for different occasions.

“They were usually made at home, and a lot of them were made of satin,” Albers says. “Women were very adept seamstresses in those days. You tried to keep up with fashion by using the materials and the dresses you had at hand.”

The now ubiquitous white dress didn’t come into style until the mid 1800s, when Queen Victoria of England wore one for her ceremony with Prince Albert, she says.

“That is a trend that slowly trickled down as society became wealthier,” Albers says. “You don’t really see white dresses appearing in Vermont until the early 20th century, and even then a lot of fancy wedding dresses were made at home.”

“Here in America it didn’t become an absolute until after World War II,” she says.

Early Vermonters were primarily Protestant in faith, Calder says, but by the 1830s the increasing French-Canadian presence brought Catholic traditions to Vermont weddings. Over time, other denominations made an appearance.

The average age of marriage for Vermonters was also much lower in the early days, she says, though economics played a role.

“People may not have gotten married until they could afford to be on their own,” she says.

By the 1960s and 70s, more grandiose weddings had become fashionable and more affordable, she says, but now the trend is starting to reverse. As people contend with smaller budgets and smaller weddings, a return to celebrating the simple things in life may be in order.

“With the recession and the way things are, people have simplified a little,” she says.