You are the owner of this article.
Edit Article Add New Article
You have permission to edit this article.
Edit
Home
State And World
Calendar
Special Publications
Multimedia
Marketplace
Classifieds
Contact Us
Follow Us
Donate
1 of 11 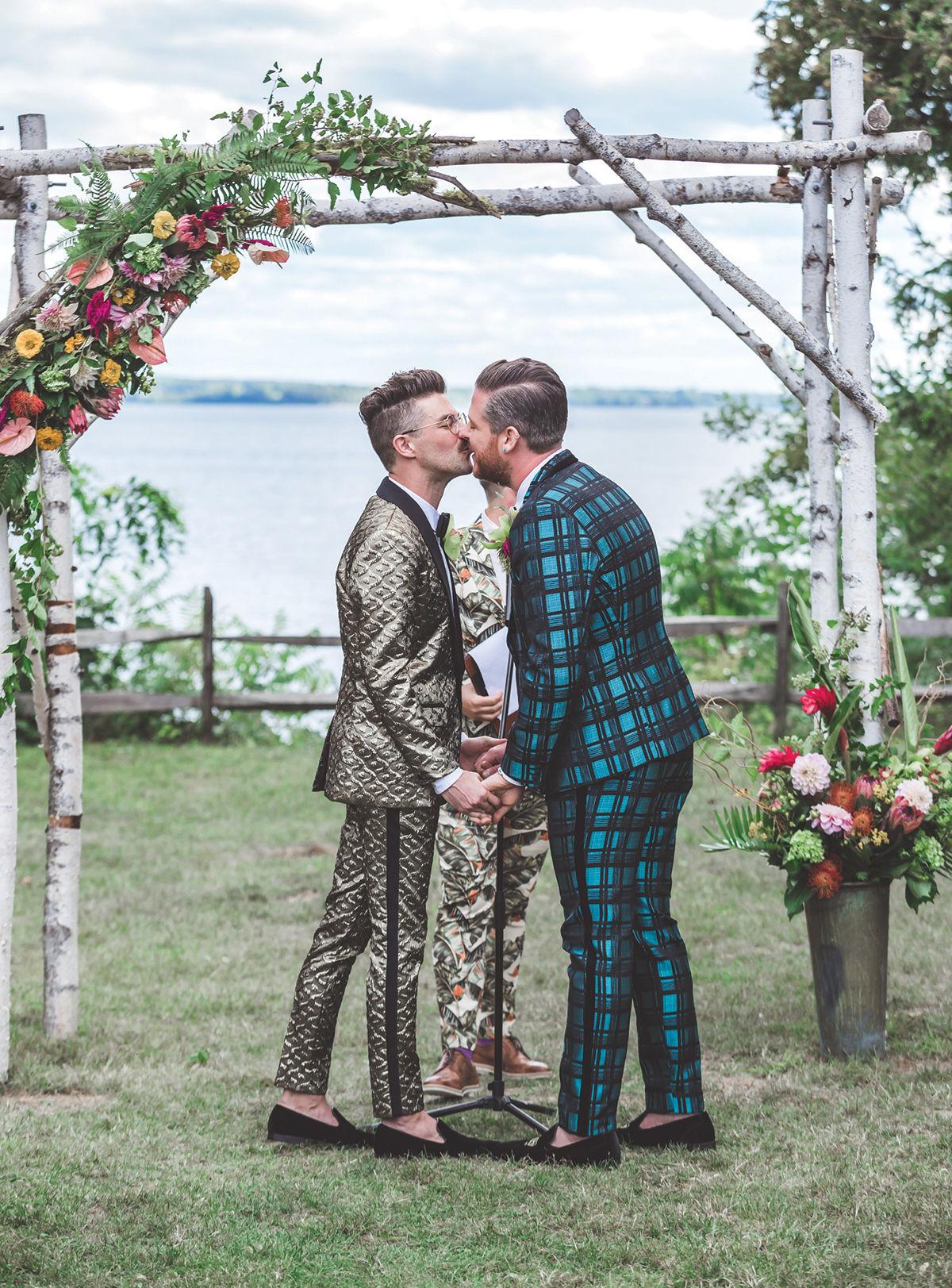 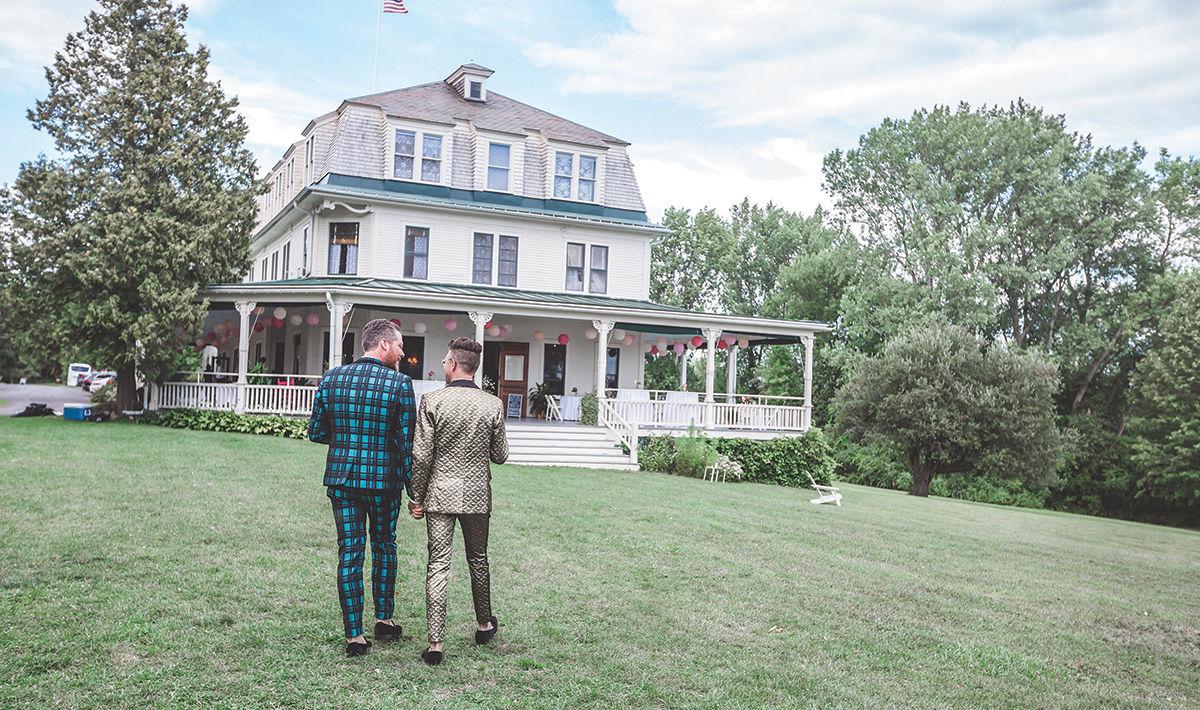 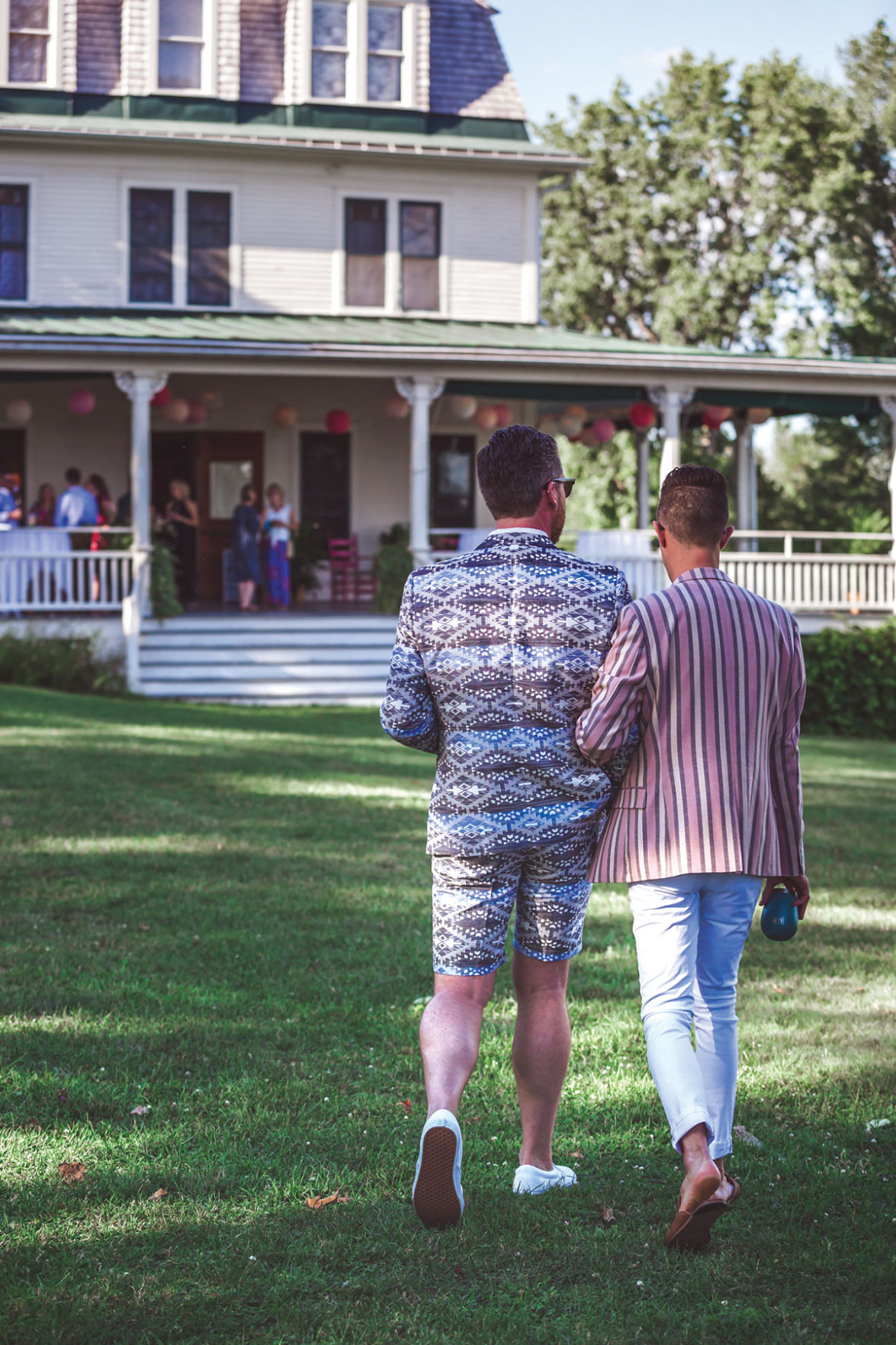 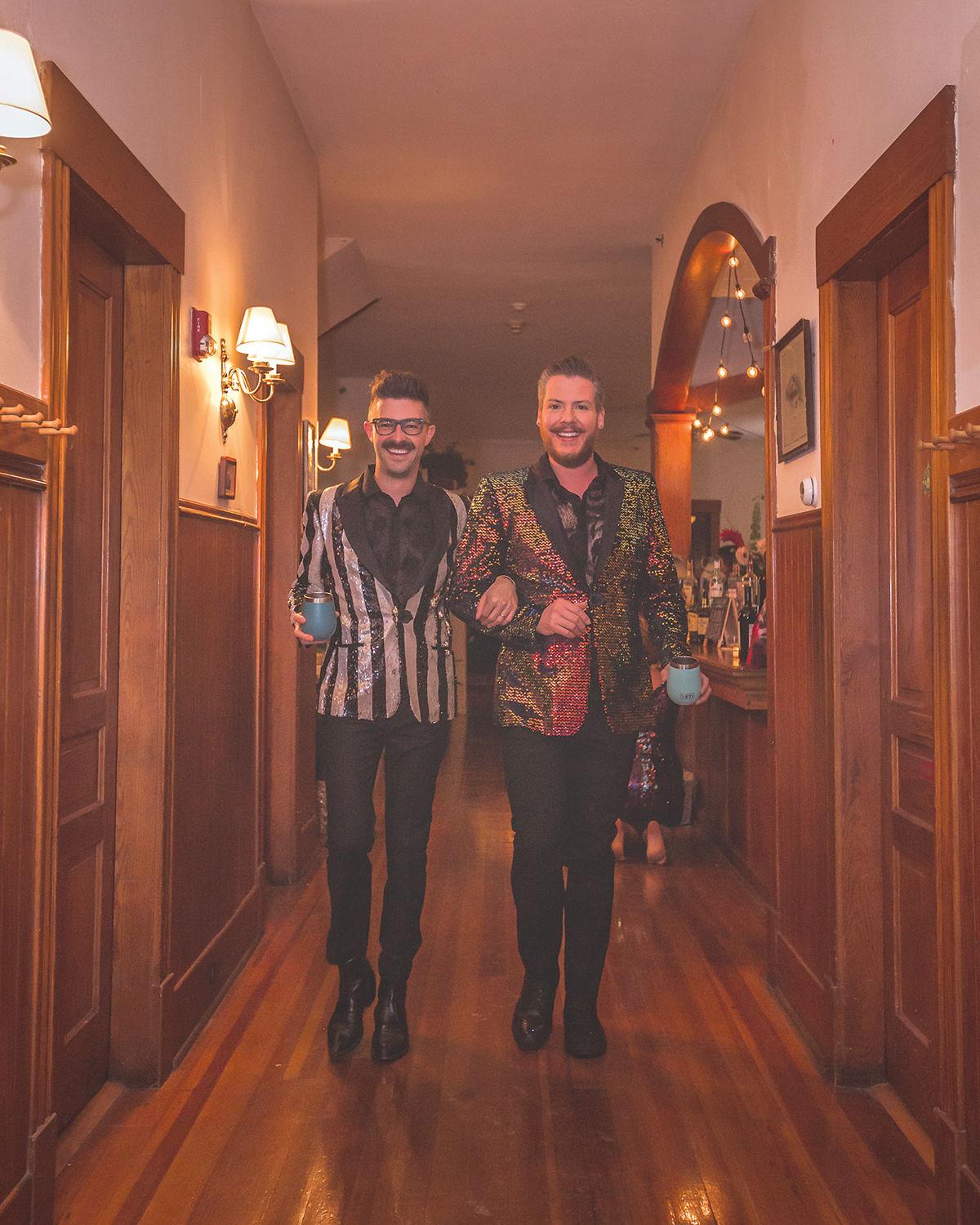 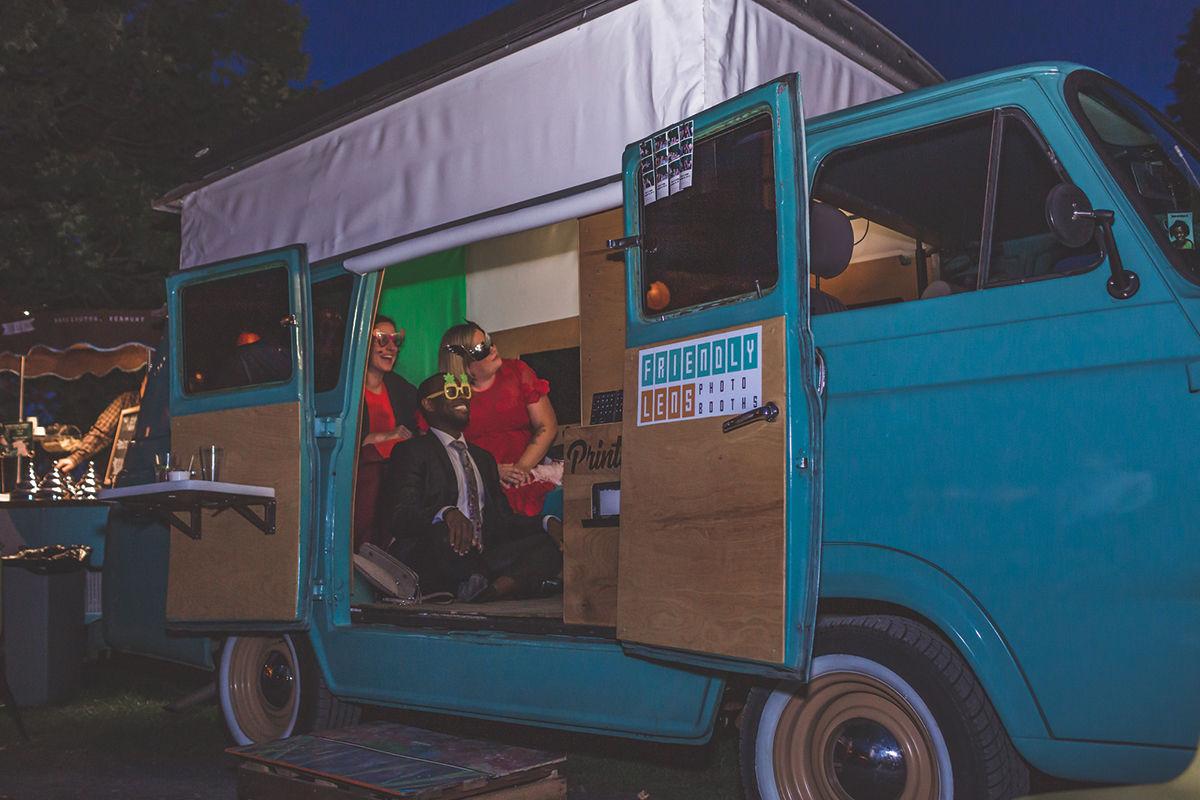 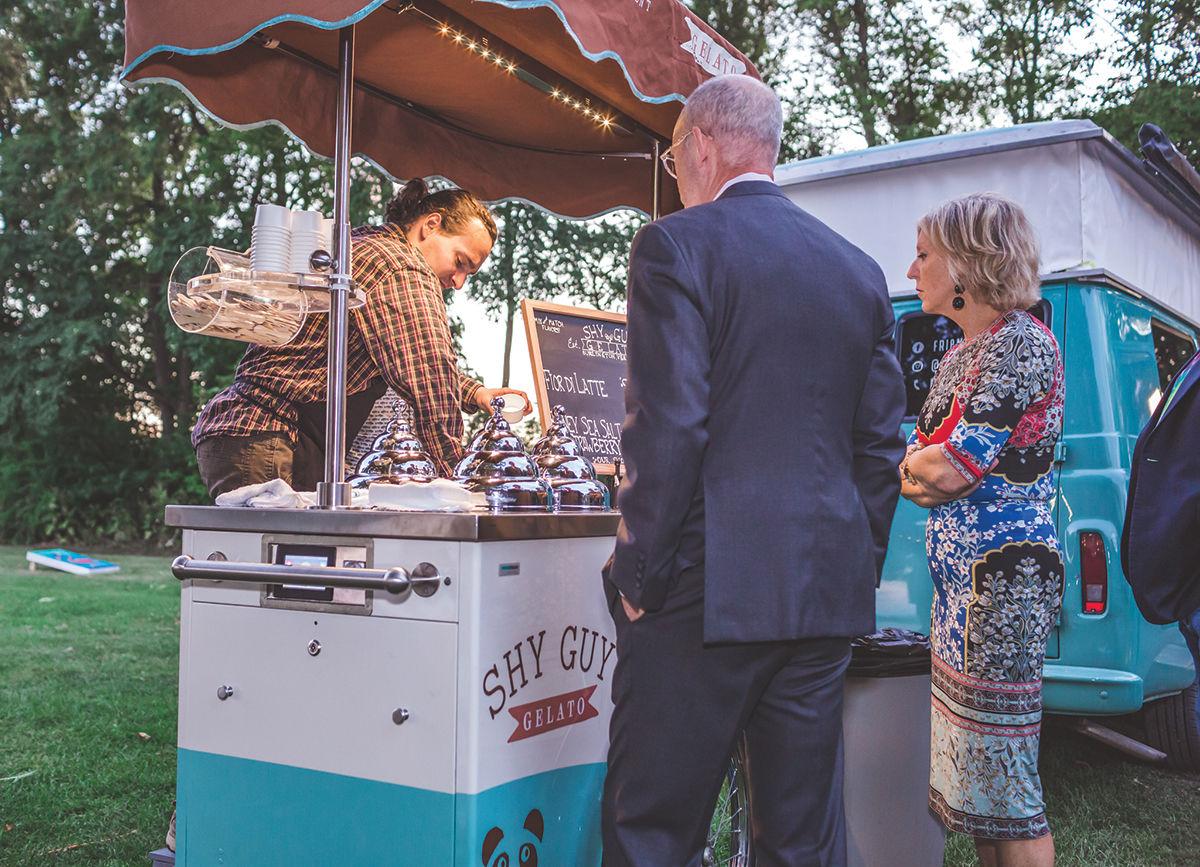 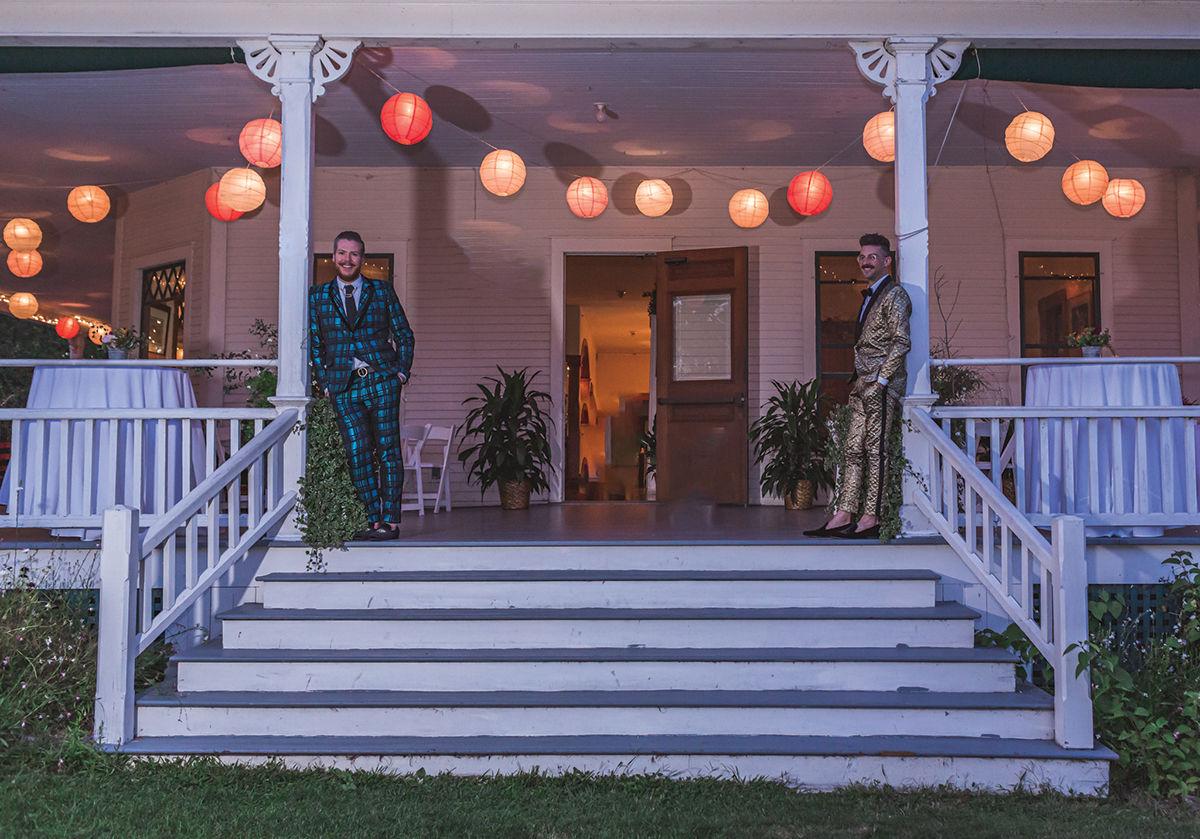 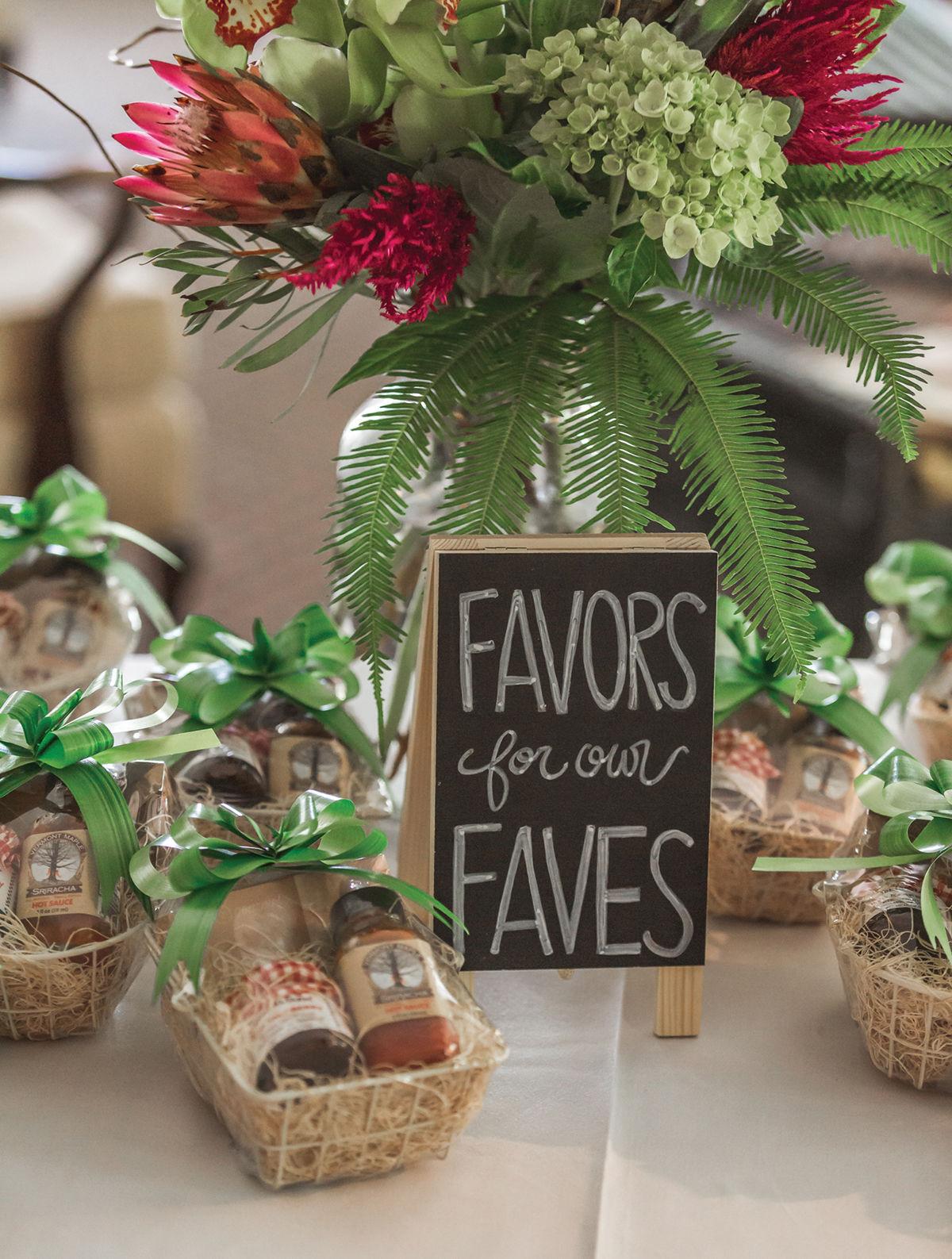 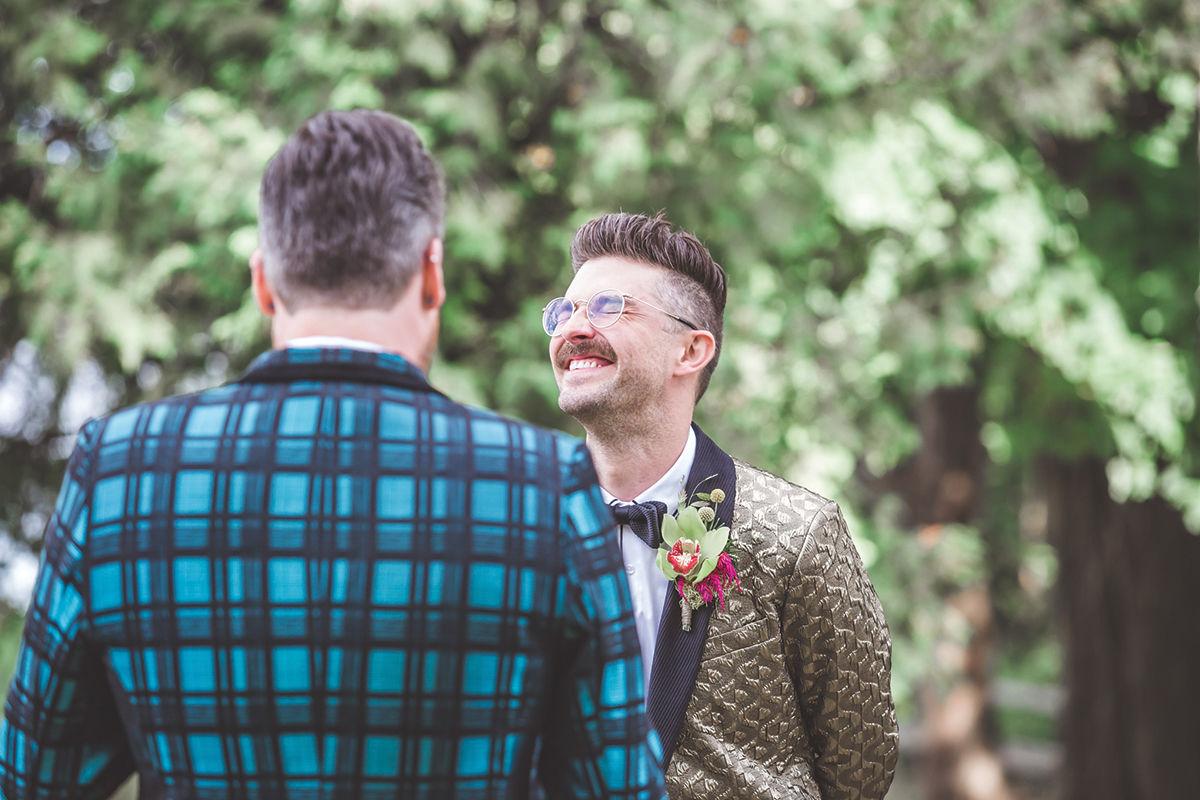 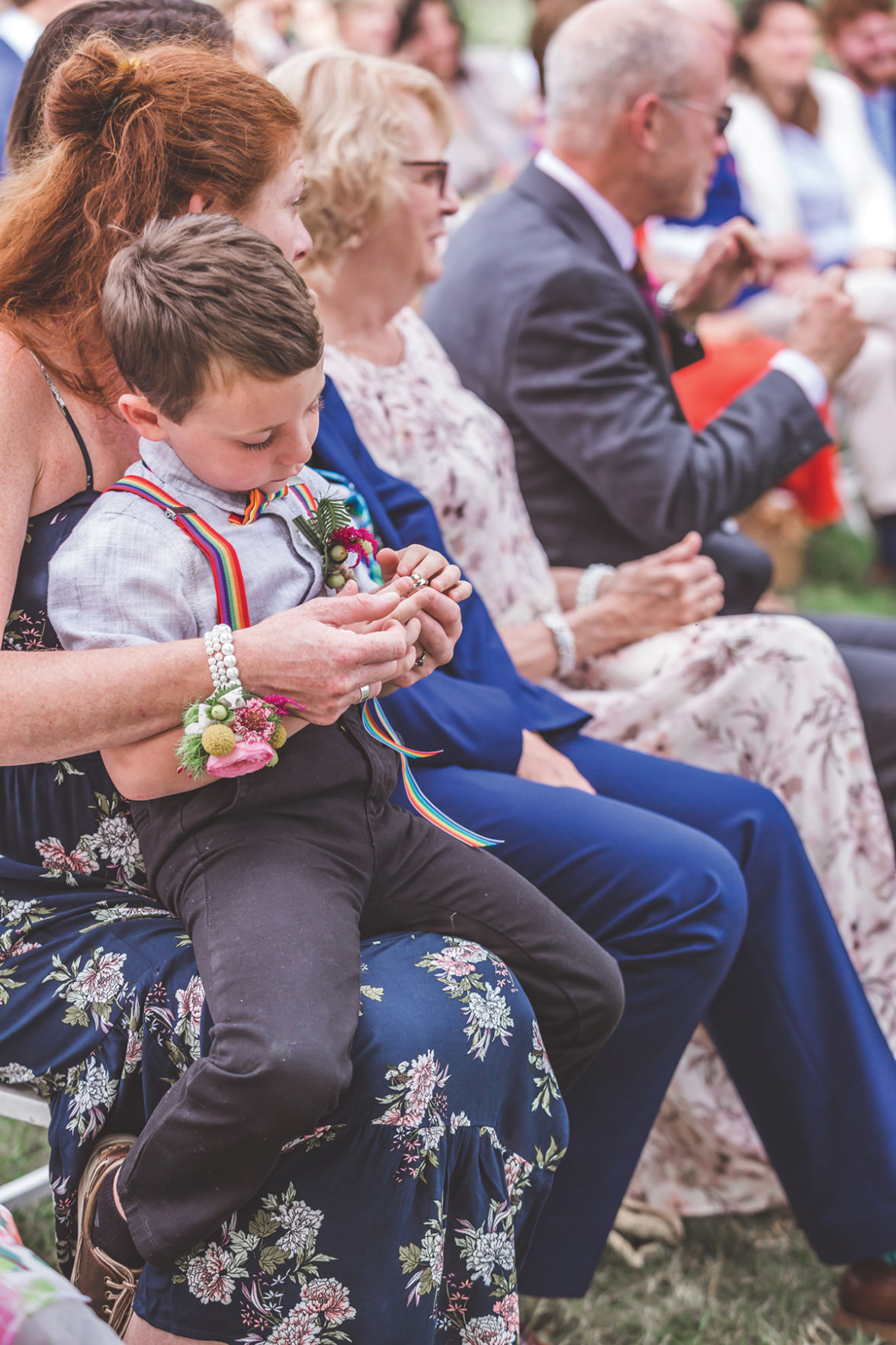 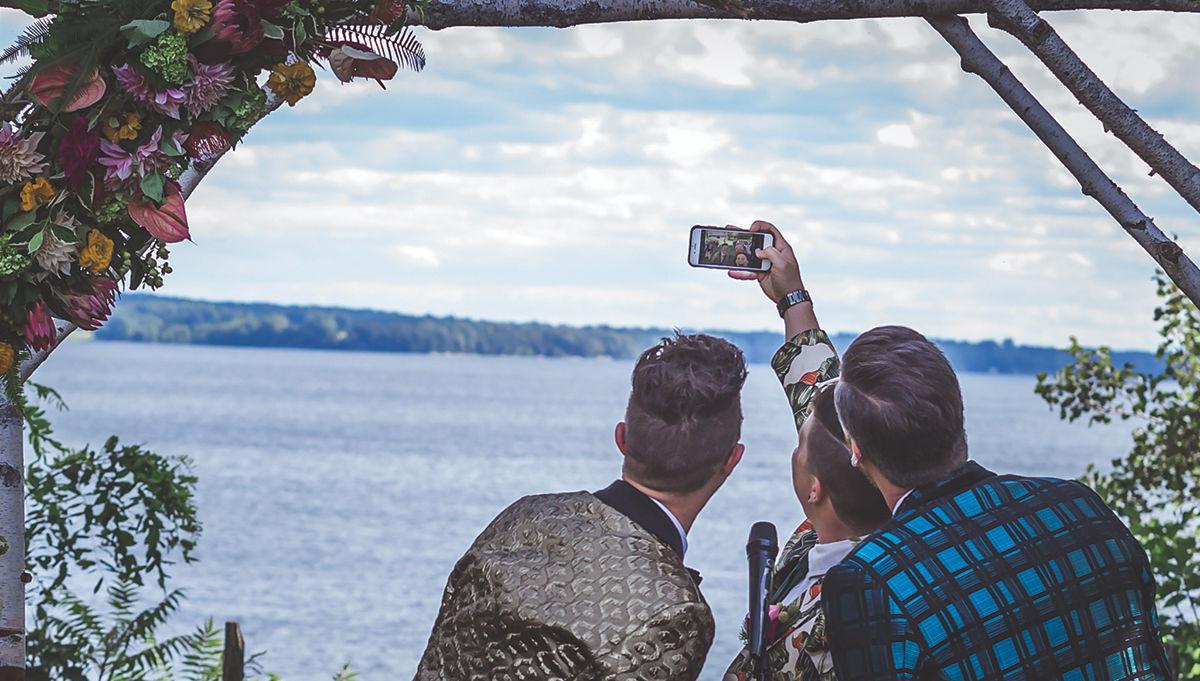 If she could just get them in the same room, Erika Meierdiercks knew her friends John Howard and Nick Savasta would hit it off.

“John had a great sense of humor that I clicked with immediately, so I naturally thought he should date my best friend,” Erika said. “It took some time, since John was in a relationship, but finally, I invited him over to hang out with all of us one night, and the spark was immediate.”

“She had been kind of telling me about Nick for a while,” John said.

“And vice versa,” Nick said. “You’ve just got to meet him,” he recalls her saying, telling him how funny and handsome and sweet John was.

“We both have big personalities, so I think she felt that the two of us would be able to manage that as a pairing,” John said.

After almost nine years together, five years co-owning a business and a wedding last summer, it’s safe to say the couple is managing just fine. Both said they knew from that first summer evening on Nick’s Burlington porch that they’d found their life partners.

“We basically extended the night for as long as possible,” Nick said. “I remember basically the feedback was, he said I was cute, I said he was cute. It was basically mutual affection” from the beginning.

Nick, now 34, and John, now 32, have been “inseparable” since their first official date at the Daily Planet bar and restaurant in Burlington.

Their families fell in love, too.

“(My son) came into my salon and sat down and said, ‘Mom, I’ve met someone,’ and he told me about John,” said Patty Russell, Nick’s mother. She later asked why he never talked about his romantic life, and he told her “there was never anyone important enough to tell you about.”

Nick’s parents met John for the first time at Sarducci’s Restaurant in Montpelier.

“I immediately liked him. He very easily fit into our family. There’s not very many of us but he has easily fit in and is a great uncle to my daughter’s two children,” Patty said. “He was very warm, very friendly, very comfortable with himself. We just were very drawn to him.”

John’s father — also named John — recalled a feeling that Nick was the right partner for his son.

“They’re a nice balance for one another. Nick is very practical, a good business mind. John, on the other hand, is a little bit more creative. One of them has the right brain, and one of them has the left brain,” John Sr. said. “I think they’re really crazy about each other.”

Because it felt so right, “we fast-tracked everything,” Nick said with a chuckle. “The puppy came a year later, we moved in a year later, and then the next year we bought a house, and then we got another puppy.”

Five years ago, Nick and John bought Cheese & Wine Traders in South Burlington, and in 2017, the couple got engaged.

“We didn’t know if we felt like it was necessary” to get married, Nick said. “When you own a house and own dogs and own a business together, it’s like, what is the value in that? But then, we really wanted to put it all on the line. We really wanted to commit, and wanted to have a party,” Nick said.

“Nick kept all of us on the hook all weekend wondering whether or not he was going to propose,” Erika recalled.

“He had us all write birthday cards for John that we read out loud at dinner. After all of the cards, Nick read his card to John in which he professed his love and appreciation for John, their relationship, and their shared dreams,” Erika said. “It was a beautiful, tender and vulnerable expression of love.”

The business of partnership

Between home life and co-owning a business, John and Nick spend many waking minutes together.

Nick spends most of his workday in the office, handling administrative and marketing duties, while John manages employees and spends more time on the store floor.

The business is open seven days a week; Nick opens the store, and John closes, giving each a few hours to have the house to himself in either the morning or the evening.

Finding a balance between work and personal time has been a challenge, but after five years in business, they’ve finally arranged to have two full days off together in a row.

“There are times when John comes home in work mode, and I’ve been off for a couple of hours, and he’s like, jumping in to talking about work, and I can’t, and vice versa,” Nick said. “We mostly are like, ‘Can you send me an email?’ which is hilarious to say.”

“They are not side-by-side when they’re working,” said Patty, who comes in to help during busy periods. “I think that they’re pretty much in agreement on how things should be handled.”

Howard and Savasta were wed at Grand Isle Lake House in August, with about 70 guests in attendance. Both have small families, so the guest list was rounded out with plenty of friends and other loved ones.

“The thing they cared most about during their wedding and planning for their wedding was to make sure everyone was comfortable. There were more snacks than you could possibly imagine and enough seltzers to quench everyone’s thirst,” said Tom Brady, John’s childhood best friend. “John and Nick were so concerned about everyone else’s enjoyment they assigned me to the task of bringing up games to play in case of a rain-out.”

“They wanted to take their time in planning so that it could be just what they wanted — every detail. They wanted it to be intimate because they wanted to be able to enjoy every moment with their nearest and dearest. They keep their loved ones close and taken care of, always,” said Heather Baker, a high school friend of Nick’s, who sang during the wedding ceremony. And Erika, who initially brought the couple together, made it official as the celebrant.

Bright, splashy florals and cheery, tropical maximalism were the themes of the weekend, with arrangements by Vermont’s In Full Bloom incorporating dahlias into tall arrangements to make a statement, and plants from Claussen’s Florist & Greenhouse.

The pair wore sequined suits by Mr. Turk — “their wedding was a fashion show,” said friend Sabrina Sydnor, who also shared her vocal charms for the sweet ceremony.

“It was very us,” John said. “We just had a fantastic wedding.”