You have permission to edit this article.
Edit
Home
State And World
Calendar
Special Publications
Multimedia
Marketplace
Classifieds
Contact Us
Follow Us
1 of 2 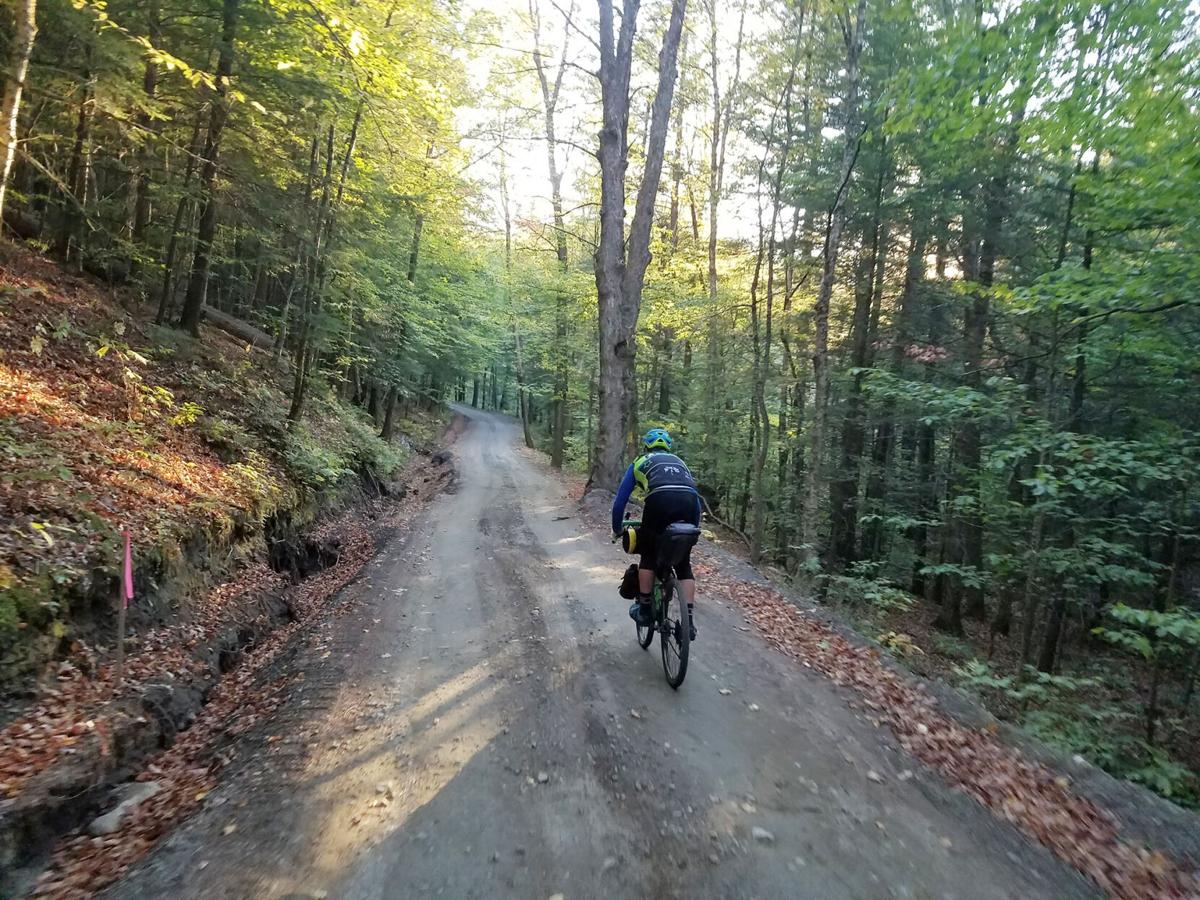 Vermont offers unlimited miles of gravel to ride, from abandoned roads through the forest to countless graveled back roads. 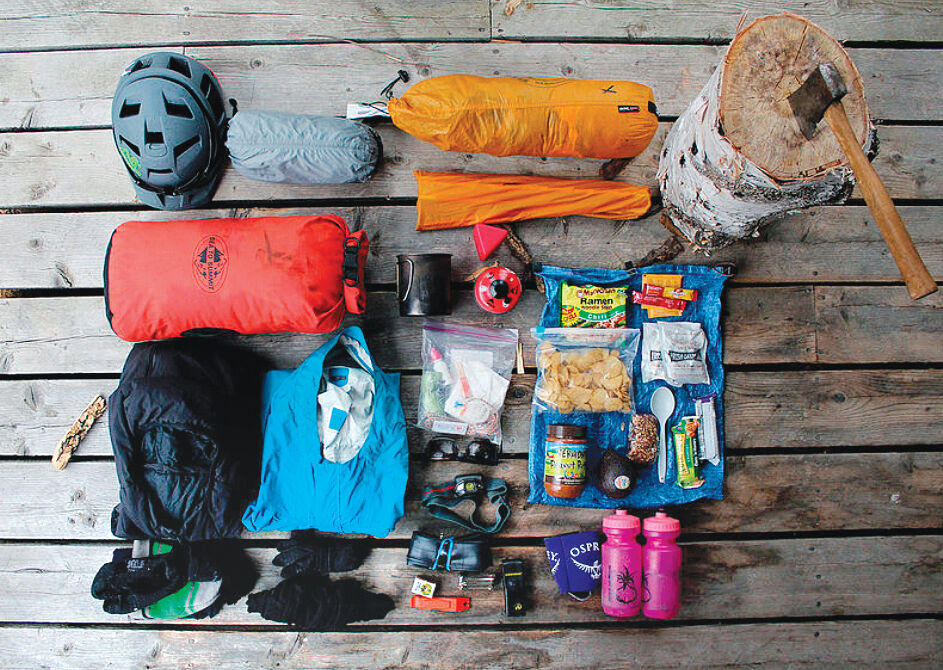 Minimalist gear laid out for a bikepacking trip into Groton State Forest. Since you carry it all on the bike, wise packing is imperative.

Vermont offers unlimited miles of gravel to ride, from abandoned roads through the forest to countless graveled back roads.

Minimalist gear laid out for a bikepacking trip into Groton State Forest. Since you carry it all on the bike, wise packing is imperative.

Every spring, as soon the snowbanks have melted, cyclists emerge in their Spandex, wheeling alone or in groups through valleys and farmland to famous passes like the Appalachian Gap in Fayston or Smugglers Notch in Stowe and Cambridge.

Increasingly, those cyclists are choosing to ride on Vermont’s 8,650 miles of dirt road. They’re much more peaceful, cars go more slowly, the landscape is largely untouched, and you can ride for hours without bumping into tourists.

Dirt roads have been a regular part of Vermont life — the way to get to school, to church, to the neighbor’s house, to the post office. And, “dirt road” covers a huge range of quality. Some dirt roads are smooth and wide; others are barely more than a footpath.

For cyclists, dirt roads are a route into the Vermont that used to be — rural, unpretentious, sparsely settled. They take people where paved roads won’t go.

“Most Vermonters, if they don’t already live on a dirt road, have one in close proximity to their home,” said Ryan Thibault, owner and editor of Mountain Bike Vermont. His group — an advocacy, event management and media production company — has helped to promote riding on dirt roads called “Gravel Grinders,” cycling events held almost exclusively along dirt miles. They’re not races, per se, but “group rides done in a mostly noncompetitive nature, although some people do push hard,” he said.

Gravel Grinder is the major fundraiser of the year for the Waterbury Area Trail Alliance.

The alliance builds and maintains the mountain bike trail network in Waterbury, and hopes to one day connect to trails in Stowe, managed and maintained by the Stowe Trails Partnership.

Alex Showerman, who now lives in Golden, Colo, and former board member of the Waterbury group, loves the Gravel Grinder because “it brings the whole community together,” up to 350 riders and lots of spectators. Many like to ride hard, but others are there to support the Waterbury Area Trail Alliance mission, or to take a long, meandering ride with friends, she said.

This year’s grinder, which took place in May, had two routes: 28 miles with 2,800 vertical feet of climbing, and “the Big Grind,” 50 miles with even more climbing.

Lots of riders use gravel bikes — similar to a road bike but with more stable geometry and wider, more heavily treaded tires — while others enjoy the event on mountain bikes, fat bikes and tandem bikes. Some people run the route.

Vermont Bikepackers specializes in using dirt roads to link routes together on extended rides through the state.

The Bikepackers, a chapter of the Vermont Mountain Bike Association, maintain two routes. One is the XVT, the bikers’ equivalent of the Long Trail; it runs 300 miles from the Massachusetts border to Canada. The other is the Super 8, which covers a 550-mile figure-8 around the state.

The XVT, conceptualized and laid out by avid riders David Tremblay and the late David Blumenthal, is usually ridden south to north, primarily on dirt roads and doubletrack mountain bike trails. About 10 percent of the route incorporates singletrack mountain bike trails in 10 distinct trail networks. For some variety, the route weaves through the Lincoln Gap, which is the steepest mile of paved road in America, with a maximum gradient of 24 percent.

The Super 8 uses some of the XVT route, but offers options for those who want to avoid the singletrack — or when the singletrack should be avoided because of wet conditions. The Super 8 is intended primarily for a gravel bike, but many go by the “run what you brung” philosophy—whatever bike you own is the perfect bike for you.

Some riders carry camping equipment (that’s where the name “bikepacking” comes from). Others map out day trips, piecing legs together so they eventually cover the entire distance — the way hikers piece together the Long Trail, and backcountry skiers the Catamount Trail.

Daniel Jordan is an evangelist for bikepacking, a sport he picked up out West, where it’s booming.

He said Vermont Bikepackers organizers make sure that “the route goes past plenty of local general stores, which offer not just refreshment and food, but become part of the Vermont experience as well.”

While the Bikepackers don’t maintain any trails of their own, they do maintain the GPS files for both routes. The Super 8 is available free for download, since it uses solely public roads, and the XVT is available for club members.

“We intend to use the money collected from members for signage and to eventually help support the trail networks utilized by the XVT,” Jordan said.

The XVT has gained the notice of record-seekers, but you can move at your own pace, making your own decisions about taking on tough terrain.

What’s true for every rider is this: Getting off the pavement delivers a remarkably different experience. All you need is a bike of some sort, a sense of adventure and a willingness to slow down a bit.