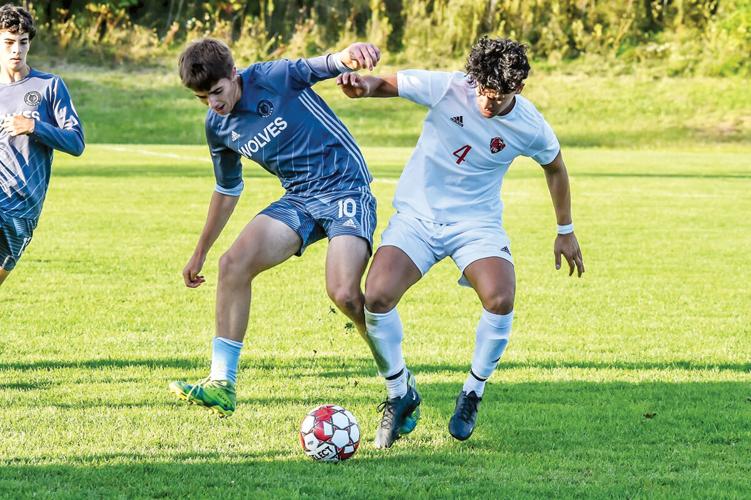 Diego Robinson tangles with South Burlington’s Nathaniel Hasenecz during the Redhawks’ game against the Wolves on Friday afternoon in Hinesburg. 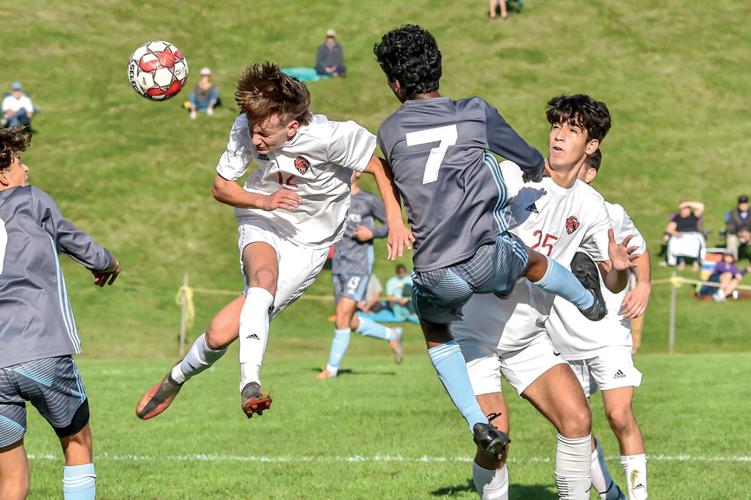 Champlain Valley Union’s Charlie Jennings leaps to get his head to the ball during the Redhawks’ game against the South Burlington Wolves Sept. 16.

Diego Robinson tangles with South Burlington’s Nathaniel Hasenecz during the Redhawks’ game against the Wolves on Friday afternoon in Hinesburg.

Champlain Valley Union’s Charlie Jennings leaps to get his head to the ball during the Redhawks’ game against the South Burlington Wolves Sept. 16.

Sam Dennison scored one for CVU, while Tom Roberts and Chandler Turner each chipped in with an assist. Evan Statton made five saves in goal.

Chloe Pecor scored the tying goal for the Redhawks, who surrendered a goal on a penalty kick in the first half. Emma Allaire stopped four shots to earn the win in net.

Jack Sumner had two rushing touchdowns and a 10-yard catch for a TD to pace the CVU offense. Asher Vaughn added a six-yard TD rush and Aidan Miller had an eight-yard run for a touchdown.

Max Destito threw for 129 yards and a touchdown pass, while Ollie Cheer added another rushing touchdown.

Emma Kim scored the lone goal with 13 minutes to go in regulation. Danielle Gamlin had an assist on the game winner.

Grace Ferguson made four saves to earn the shutout in goal, while CVU moved to 3-0.

Three Champlain Valley players tied for medalist honors and the Redhawks captured the win at Rocky Ridge on Saturday.

Bryce Bortnick, Jason Douglas and Jake Strobeck each shot a 40 as part of a five-way tie for the top spot. Connor Mulaney and Travis Stroh each had 41 to round out the CVU scorers.

The Redhawks finished with a score of 161 for first place, Rice (170) and Middlebury (196) followed in second and third.